A program intended to feed Baltimore County’s hungry and homeless instead cost taxpayers more than $1 million in idle equipment and an empty building, a report released yesterday by Inspector General Kelly Madigan says.

Of the $1,023,000 minimum spent by the county, less than 48,000 pounds of food was grown for the “Produce for the People” program hosted at the Baltimore County Center for Maryland Agriculture and Farm Park, better known as the Ag Center.

Most of the spending that Madigan uncovered took place when the late Kevin Kamenetz was county executive and William “Chris” McCollum ran the Ag Center, located in bucolic Hunt Valley.

McCollum championed the center’s “Produce for the People” program, designed to supply high-quality crops to local food banks and homeless shelters, while providing agricultural education opportunities to the non-farming public, including schoolchildren.

In a 2017 briefing memo, McCollum said he could place into production 50 acres of land and ramp up production to yield between 500,000 and 600,000 pounds of sweet corn, green beans and other produce within three years. (McCollum is identified in the report as the “Ag Center Coordinator.”)

But from the start, the report says (full text), the program was beset by excessive spending.

All of the equipment was purchased new from vendors, often including top-of-the-line accessories, and some of the machinery was never recorded, in violation of the county’s Fixed Assets Control Policy, the report says.

In addition to “tens of thousands of dollars on smaller equipment and operational supplies,” Madigan flagged $629,594 spent on a greenhouse and $511,000 on tractors, tillers, sprayers, planters, harvesters and plows as “waste” because they have been put to minimal use.

The original plan by McCollum was to rely on volunteer labor. But he wound up employing a single farmer, who planted eight acres of land in 2018, yielding just 47,190 pounds of produce.

“While the idea of using the county’s land and resources to grow food to help feed Marylanders was a noble endeavor, the Office’s investigation revealed that the majority of the equipment and the greenhouse have only been put to limited use since being implemented at the Ag Center,” Madigan said.

“The greenhouse has only been used by the county to grow a relatively small amount of lettuce and tomatoes, none of which was donated”  – Baltimore County IG report.

“Hard to believe that some think providing food for those that are in need is somehow bad”  – William “Chris” McCullom on Facebook.

The Ag Center has not grown food using the equipment since 2018, while the greenhouse, after its completion 2½ years ago, has not been used for any “initiative that addresses hunger.”

“As of the date of this report, the greenhouse has only been used by the county to grow a relatively small amount of lettuce and tomatoes, none of which was donated.”

The report noted that the greenhouse was originally projected to cost $225,000, or a third of its eventual price tag. Most of the building’s equipment was unopened and still in its original packaging until last summer. 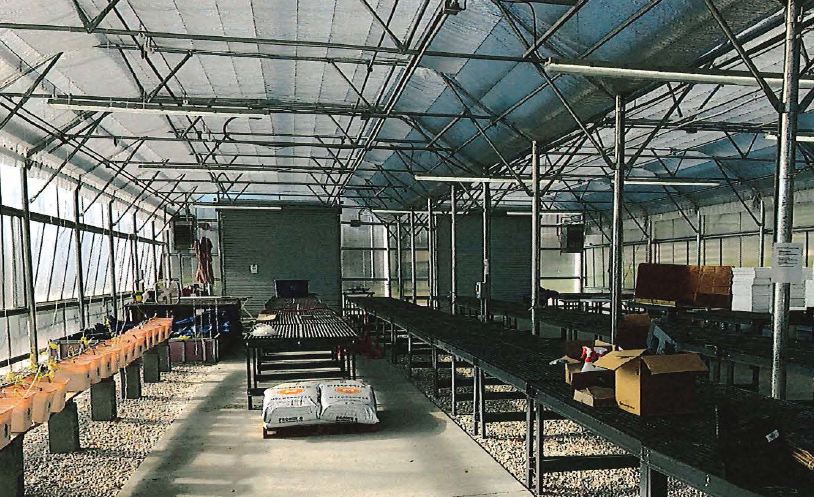 Largely empty (except for stored bags) greenhouse built for the “Produce for the People” program. BELOW: County Executive Don Mohler hails one of the program’s last known yields, 5,000 pounds of green beans, in 2018. (IG Report, Facebook) 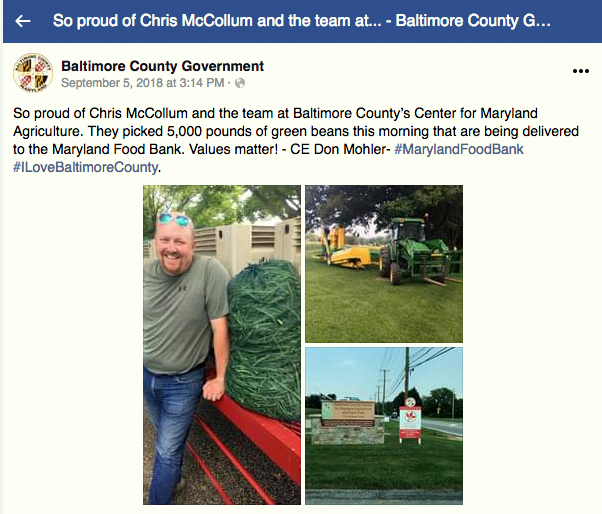 For months, county officials have refused to answer inquiries about Ag Center spending, including seemingly unrestricted credit card purchases made by McCollum, who headed the facility from 2010 until early 2019.

Madigan apparently faced a similar problem. Her report noted that “locating the accounting-related paperwork (e.g., purchase orders and invoices) for the equipment was difficult because the purchases were funded through various departments and were not categorized as being associated with the Ag Center.”

Records obtained by The Brew through a Maryland Public Information Act request showed that McCollum spent heavily for animal care, farming supplies, tools as well as numerous unexplained purchases, including those made during frequent trips to Home Depot and Tractor Supply.

Among the questionable items: A $200 mechanic’s tool set, $150 iPhone Gimbal and $170 women’s winter boots, all purchased directly by McCollum with county funds.

The Brew also found a $16,000 bill for three sheds, approved by McCollum but not listed in Madigan’s report of inventory found at the Ag Center. 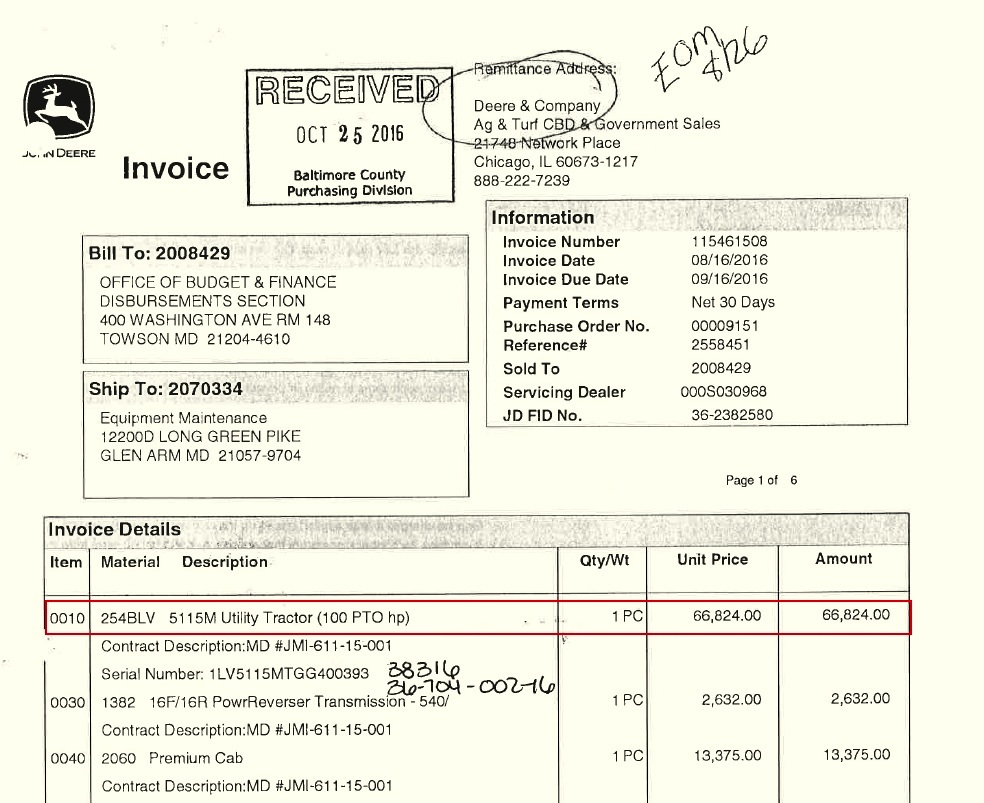 Invoice for a $67,000 John Deere utility tractor purchased for the Ag Center. It included a premium cab adding $13,375 to the price. (From Md PIA request)

McCollum, who was transferred to the County Department of Economic Development after Johnny Olszewski Jr. became county executive, did not respond yesterday to questions about the IG report.

But questioned previously about his spending at the Ag Center, he took to Facebook and said, “I’m glad we are providing Ag education AND providing 100’s of 1000’s of pounds of food to the Maryland Food Bank through the Farm to Food Bank Network.”

“Hard to believe that some think providing food for those that are in need is somehow bad,” he added, in the March 2018 post.

County Administrator Stacy L. Rodgers faulted “the previous administration” as well as the coronavirus pandemic for the under-utilization of the farm equipment.

In a written response to the IG report, Rodgers said, “Unfortunately, we inherited a number of issues that date back to the previous administration.

“As in the case of this matter, we are working aggressively to address a number of these issues as we strive to become a best practice jurisdiction,” Rodgers said, noting that a new farm manager was hired last year.

Even though planting was not possible due to concerns about staff and volunteer safety amid Covid, Rodgers wrote “we are confident that having a manager with agricultural expertise to run this facility will dramatically improve the programming and operation of the center.”