Lawrence Bell III doesn’t want a Checkers drive-through restaurant on Gwynns Falls Parkway because he’s afraid it will cause traffic accidents and won’t be compatible with the surrounding area.

Mary Hughes doesn’t want the drive-through because she’s afraid it will make the area less safe for children walking to the elementary school one block away and will cause property values to drop.

Vera Robinson doesn’t want a Checkers in her neighborhood because she doesn’t think it will serve healthy food.

These are some of the reasons why residents have come together to fight a proposal to build a Checkers drive-through restaurant at Gwynns Falls Parkway and Tioga Parkway, just west of Mondawmin Mall.

During a recent virtual meeting of Baltimore’s Board of Municipal and Zoning Appeals (BMZA), residents representing half a dozen groups voiced opposition to the Checkers project.

The zoning board also heard testimony opposing the project from Sheena Ham, president of the Parent Teacher Organization at Gwynns Falls Elementary School, and James Torrence, the area’s councilman. It received more than 20 letters and emails in opposition, including one from The Johns Hopkins University.

The chief proponent at the hearing was attorney Joseph Woolman, who represents Checkers and the property owner, Ahmad Iftikhar.

Despite the community opposition, the BMZA voted to approve the drive-through restaurant with the condition that the development is approved by the city’s Planning and Transportation departments.

Unhappy with that decision, community leaders have asked the board to reconsider its decision and are exploring ways to legally block the project if it won’t reverse its position.

The appeal marks at least the fifth time in recent years that a community group has appealed a pro-developer decision by a city panel.

Other examples include the approval of plans for two projects by Larry Jennings in Woodberry, a Royal Farms store with gas pumps on Harford Road, and a request by New Jersey developer to subdivide the United Methodist Church property on Mount Vernon Place. Those cases were all appealed in the Circuit Court for Baltimore City.

What makes the Checkers case different is that the opponents are Black residents who are raising questions of racial equity.

They say they don’t believe a similar project would be approved in a predominantly-White neighborhood like Canton or Charles Village and don’t see why the Greater Mondawmin area of West Baltimore should be treated differently.

That point was made in a letter that was read into the record during the January 26 hearing by Livhu Ndou, then acting director of the BMZA who has since left the agency.

“If this were a White neighborhood, it would not even be a consideration, but being a Black neighborhood, we have to contend with such nonsense,” said the letter writer, identified by Ndou as a member of the community.

“This is a family-oriented neighborhood,” the letter writer continued. “We take pride in our hidden gem of a community by having an active community association with caring and compassionate leaders. We already endure the school traffic, trash and noise, the buses tearing down the streets, people getting off and on buses throwing trash, running stop signs, not slowing down for speed bumps and music.”

Michael Scott, a resident of Panway and representative of a health collaborative called Equity Matters, took the point further.

“There is a thing called greenlighting, where you greenlight projects without the sovereignty and input of residents,” Scott told the board. “We have been very clear. We do not want this here. And if you do it, it is a racist and colonial move. I want you to be very clear about this.”

The chair of the zoning board, James Fields, cut him off.

“We don’t have the authority to deny a restaurant, and we can’t take the time to discuss that issue,” Fields told Scott.

“The issue that I’m discussing is sovereignty,” Scott said, “and how it has worked in the past in this neighborhood with people that want to find a viable economic solution.”

“There is a procedure here, and I’ve got to control this hearing,” Fields responded. “We need testimony on the issue of the drive-through. That’s the only issue before the board.” 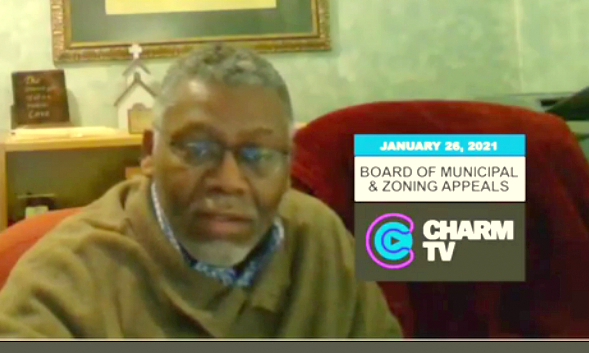 “I’ve got to control this hearing,” said BMZA chair James Fields, saying the board was not the place to discuss race and equity.

Residents raised the equity issue again in a February 5 letter appealing the zoning board’s decision to allow the drive-through.

“It seems that Black citizens in West and East Baltimore are treated very differently these days than White residents in Roland Park and Charles Village and Mount Vernon and Canton,” wrote Bell, who served as president of the City Council from 1995 to 1999, and Keith Pennick, president of the Hanlon Improvement Association.

“It also appears that notwithstanding the current so-called ‘Black leadership’ in City Hall and in Annapolis today, Black residents of Baltimore are less respected than ever.”

“Whenever you had that kind of unanimity, something like this would be dead in the water”  – former City Council President Lawrence Bell.

Bell said during a visit to the site that when he was at City Hall, the concerns of the residents in an affected community traditionally carried at least as much weight with the zoning board as the financial interests of developers.

“The way I remember things being back in the day, when you had several adjacent communities united in opposition to a proposal like this and also the councilman, whenever you had that kind of unanimity, something like this would be dead in the water,” he said. “But it seems like this zoning board has completely ignored the people.” 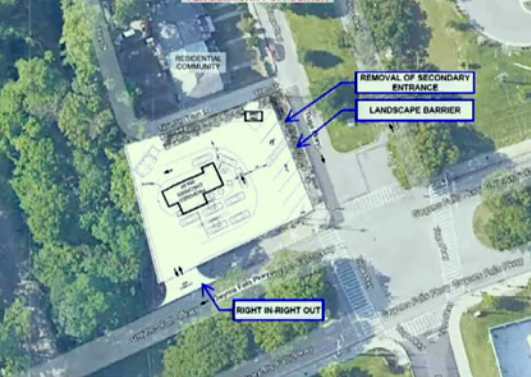 Located at one of the city’s most hazardous intersections, the auto shop is just feet away from the tidy Panway neighborhood. (Ed Gunts) 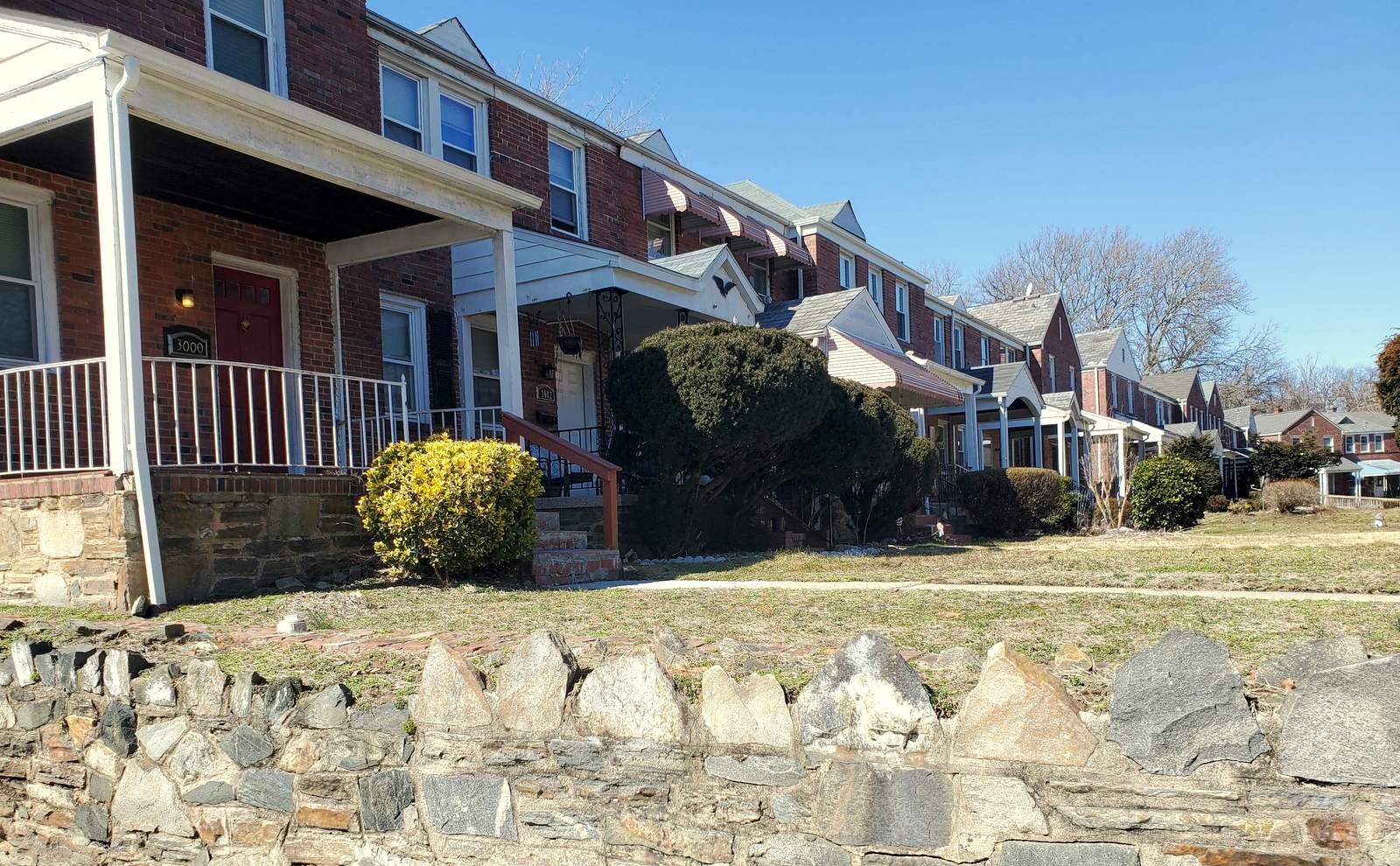 The property at Gwynns Falls and Tioga parkways is currently occupied by Integrity Auto Repair Center. Before that, it was a gas station.

The land is zoned C-2 for commercial use. A restaurant such as Checkers is a permitted use, but the addition of a drive-through lane and window is a conditional use that requires approval from the zoning board.

According to testimony from Gonzalez, executive director of The Urban Oasis, the landlord wants $7,000 a month in rent for the property, far above the average rent for local restaurants of $2,000-$4,000 a month.

That price makes it “nearly impossible for any small business, especially a minority-owned business, to move into the location,” Gonzalez argued. 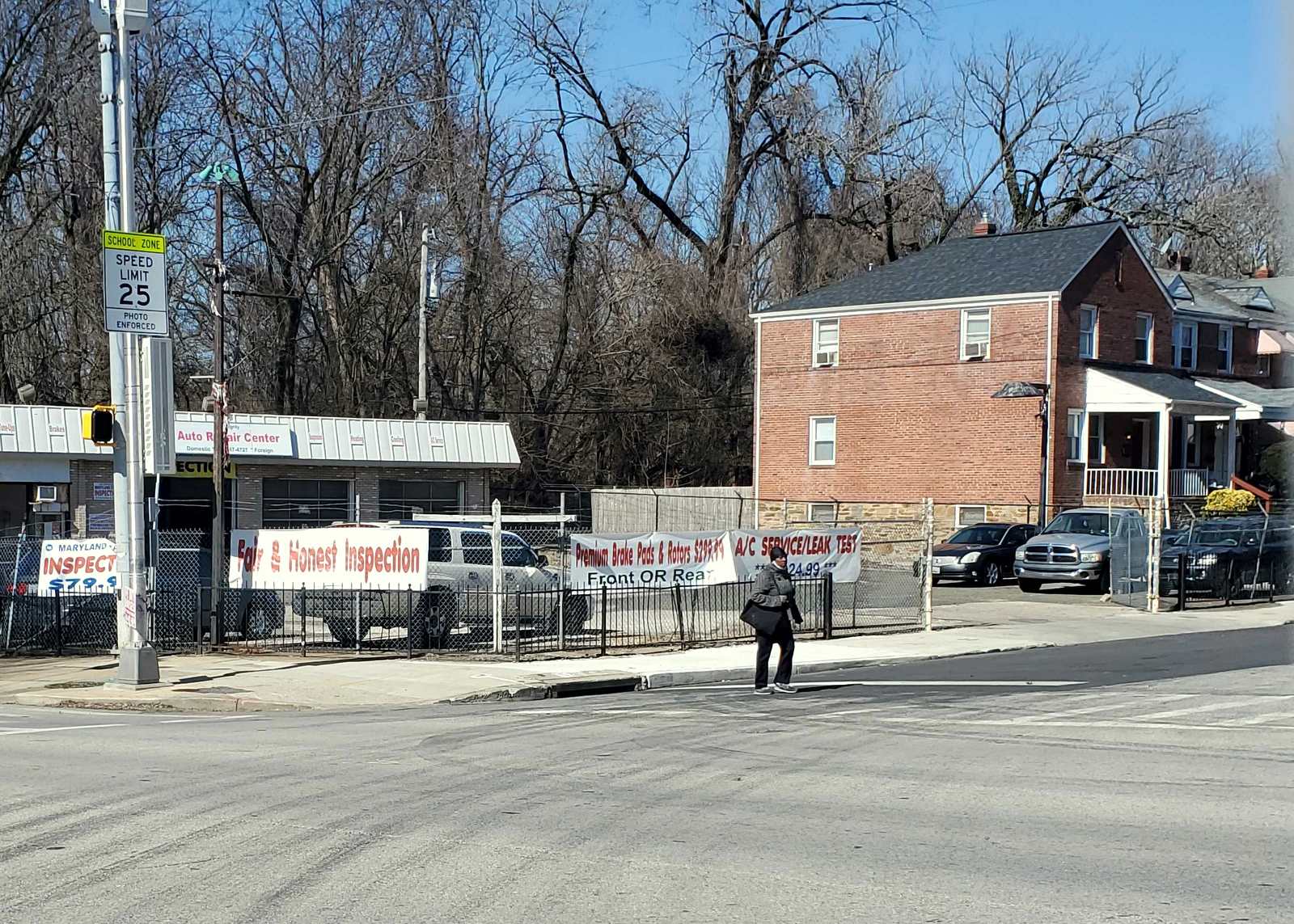 A pedestrian crosses Tioga Parkway next to the auto shop. A few blocks to the west is the Gwynns Falls Elementary School (Ed Gunts)

Torrence, a first-term councilman, told the board that there were 17 accidents at that intersection in January alone and more than 300 speed camera violations. A fast-food restaurant with a constant flow of cars driving in and out will only lead to more accidents, he said.

Woolman, the Checkers attorney, said the site plan has been revised so all vehicles would enter and exit from Gwynns Falls Parkway, not Tioga Parkway as originally proposed.

He argued that construction of a Checkers would improve the area by removing a non-conforming use at the site.

“We’d like to achieve what’s only the goal of good zoning and good planning and that’s to extinguish the non-conforming use here, which is, frankly, and no offense to my client’s current tenant, a pretty awful-looking, dilapidated, outdated service garage,” he said. 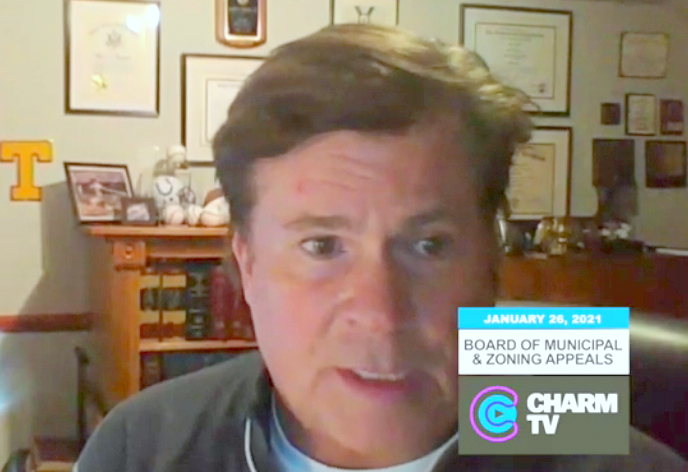 “We’d like to achieve what’s only the goal of good zoning and good planning,” says Checkers attorney Joseph Woolman.

Mary Hughes said that the opponents are now focused on the drive-through issue, although they are also concerned about whether there are still gas tanks buried at the site.

State law requires any underground tanks to be removed before a food service operation can move in.

Hughes said BMZA’s new acting director, Kathleen Byrne, has acknowledged receipt of the community’s request for a new hearing. Now residents are waiting to learn a date for when the request will be considered.