Consumer advocates in Baltimore are making a last ditch effort to kill a City Council bill – backed by President Nick Mosby and poised for final passage tonight – that they say will hurt, rather than help, city renters.

Baltimore Renters United has been highlighting links to scathing Better Business Bureau reviews of Rhino, a New York-based company that stands to benefit from one provision of the measure.

As an alternative to putting up a security deposit, Bill 21-0022 lets renters purchase “rental security insurance,” which Rhino sells and which advocates for the poor say is a predatory and deceptive product.

“Rhino has been collecting money from my credit card without answering my emails and requests to stop their service,” one BBB commenter reported.

“I have been presenting them with all the necessary information to cancel my Rhino policy for over 6 months and never hear back,” the person complained. “Meanwhile, Rhino places hold on my card for $3,000, then for $6,100 with no clear explanation or anything I can do about it.”

Another described being unable to reach the company to halt improper payments: “The fact that Rhino has NO working phone number and is almost impossible to contact feels like FRAUD.”

Along with opponents in the community, Councilman Ryan Dorsey has been trying to amend the bill, to strip out the rental insurance provision and leave intact the part that allows renters to pay off their security deposit in installments.

But Mosby ally, Councilwoman Sharon Green Middleton, spurned those efforts in committee, and today Mosby signaled that the bill has his strong support.

“Again, this is what I believe is a substantial bill that provides a sustainable solution here in the city of Baltimore,” Mosby said at today’s Council lunch. “I’m so excited to support that tonight.”

Another strategy by the bill’s opponents is to point out what happened to a similar measure in the General Assembly, proposing to allow renters statewide to “pay a fee in lieu of security deposit:”

It was opposed by the Maryland Attorney General, and in February it died in at the Senate Judicial Proceedings Committee, where it was referred to summer study.

“Senate Bill 892 could make it easier for landlords to engage in unfair, abusive or deceptive practices by either misleading or failing to advise prospective tenants of the consequences of choosing to pay a fee in lieu of security deposit,” wrote Kira Wilpone-Welborn, of the AG’s Consumer Protection Division.

“Though Senate Bill 892 would expose tenants to abusive practices by landlords, it fails to provide any meaningful benefit to tenants,” she added. 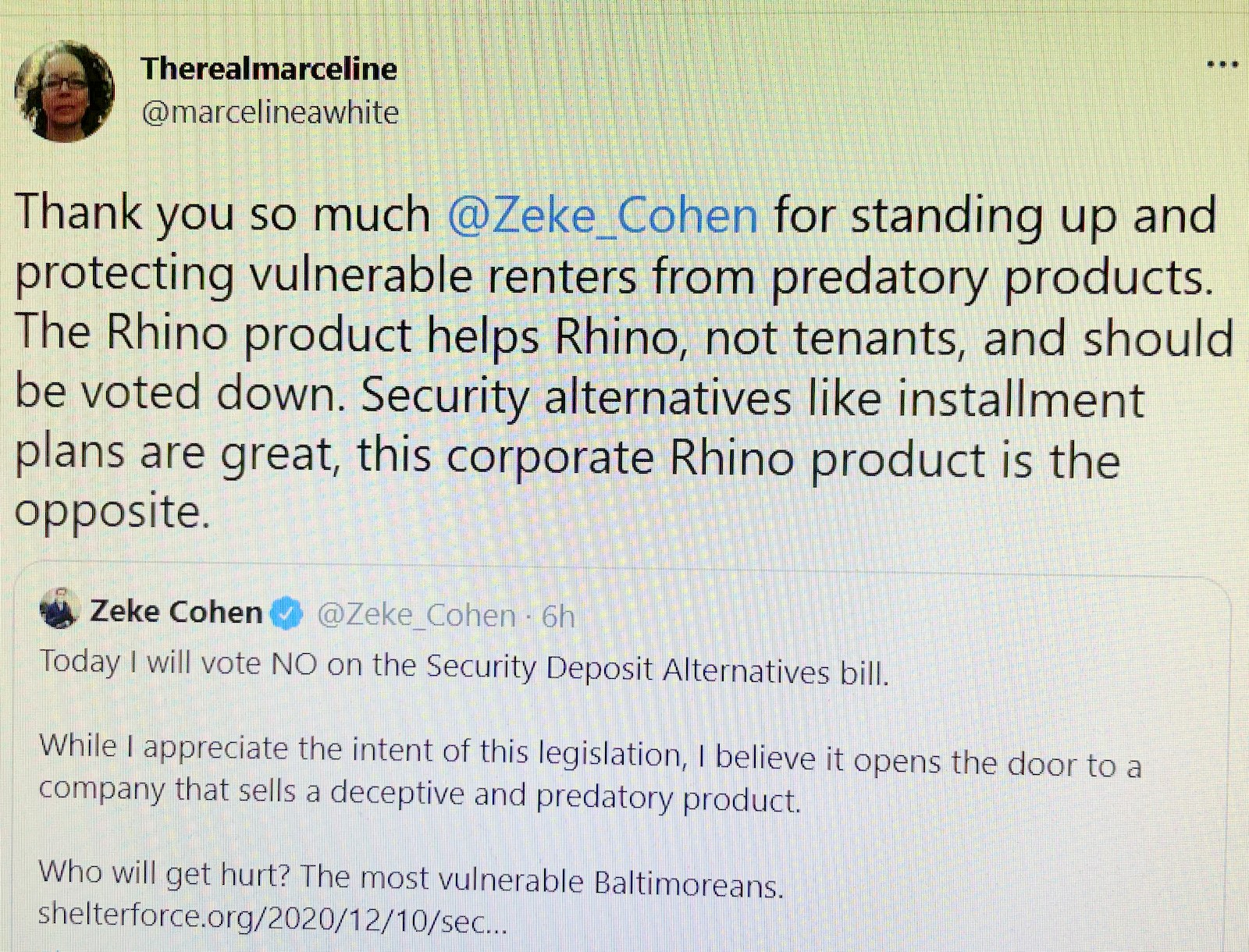 A tweet in opposition to the bill by Marceline White, executive director of the Maryland Consumer Rights Coalition. (Twitter)