Nearly three years after completing work on the tallest building in Baltimore, the 44-story apartment tower at 414 Light Street, Questar Properties Inc. has begun work on its next major project in the city.

It was introduced today as the co-developer of a 350-unit rental apartment building at The Village of Cross Keys, the planned community on Falls Road that is undergoing redevelopment and expansion by Caves Valley Partners.

Caves Valley and Questar announced that they have formed a joint venture to build the residential component of the Cross Keys development, which also includes new retail and office tenants for existing commercial spaces, upgrades to the roads and entrance gatehouse, a grocery store and a Class A office building.

The apartment building will be the first new major structure to rise at Cross Keys since Caves Valley acquired the commercial assets of the mixed-use community from Ashkenazy Acquisition Corporation last July.

During a meeting of Baltimore’s Urban Design and Architecture Advisory Panel, Questar unveiled its preliminary plans for the apartments.

They call for 350 apartments and 500 parking spaces in a six-story building that will be constructed south of the Village Square on the west side of the Cross Keys property near the Jones Falls Expressway.

The 3.4-acre construction site includes a portion of the former Cross Keys Tennis Club and an adjacent vacant parking lot.

Under the joint venture agreement, Questar will be the lead partner on the development, construction and management of the apartment building, with Caves Valley providing development support and coordination.

Caves Valley is the master developer for the community at 5100 Falls Road, including its office and retail portions.

The apartment project is currently scheduled to begin construction in mid-2022 and be finished in late 2023. Caves Valley partner Arsh Mirmiran had previously said he wanted to bring in a company with expertise in high-end rental apartments to lead the development of the residential component.

“One of the primary factors in our decision to proceed with the redevelopment of Cross Keys in the middle of the pandemic was the broad community support we had for the addition of a mid-rise luxury apartment building to the project,” he said in a statement today.

“With the backing of the surrounding communities, we successfully amended the Planned Unit Development for the property late last year and embarked on an effort to identify the ideal joint venture partner for the project.”

After a rigorous selection process, he said, “we felt that Questar’s vision for the Cross Keys project and its generational expertise developing luxury multifamily communities. . . set them apart.”

Stephen M. Gorn, Questar’s chairman and CEO, and Zach Gorn, vice president and principal, are both lifelong Baltimoreans. They said in a statement that they were attracted to Cross Keys by the potential to create a first-class residential project there. 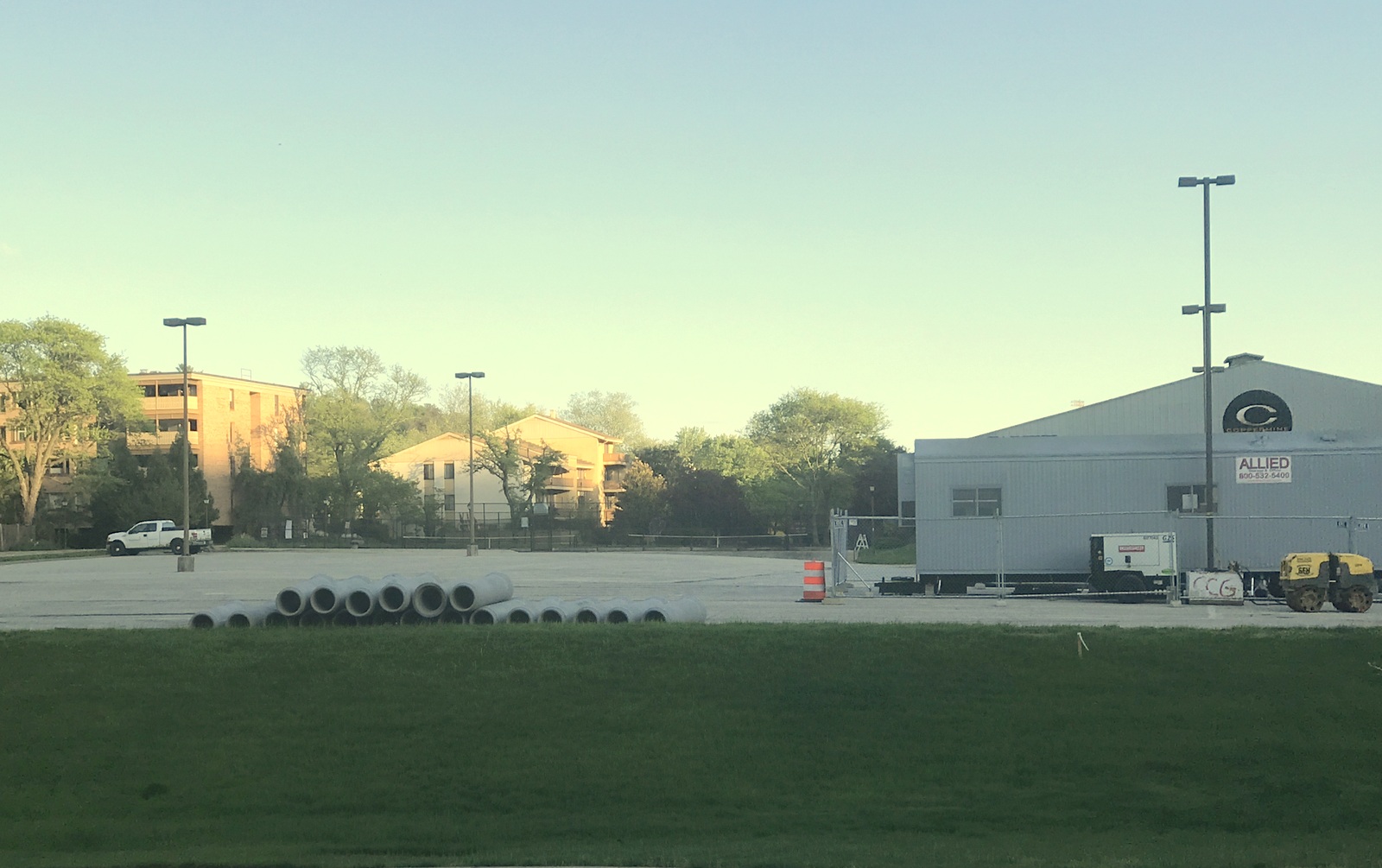 The proposed site is now occupied by a vacant parking lot and the former Cross Keys Tennis Club. (Mark Reutter)

In previous meetings with UDAAP, Mirmiran said Caves Valley was debating whether to construct an apartment building or an office building closest to the Village Square.

Today’s presentation showed that Caves Valley has decided to construct apartments closest to the retail center and then construct a separate office building south of the apartments as a later phase.

The developers say the apartment building is being designed to have a resort-like feel, including a swimming pool deck, an extensive amenity package and abundant outdoor community space.

CBT of Boston is the architect for the project and Kimley Horn is the land planner and civil engineer. Their renderings showed a building with an open-ended entrance court on its north side and another courtyard on its south side.

The exterior was clad in red brick, and many of the apartments have balconies. Although a master plan approved by the City Council would allow a store or restaurant at ground level, that was not part of the plan presented.

Review panel member Osborne Payne asked whether the project would have a direct connection to the Jones Falls waterway and was told that was not part of the plan.

Payne and other panel members said they thought the preliminary design was very “busy” and suggested that the developer try to simplify it, perhaps by making the project look more like two buildings rather than one large building. The team is required to return to the panel as part of its application for construction permits.

When it acquired the commercial assets of Cross Keys last summer, Caves Valley ended 16 years of ownership by Ashkenazy and returned the community to local ownership. Cross Keys also includes a hotel and nearly 700 residences, but they weren’t part of the sale to Caves Valley.

In January, Mirmiran announced 10 new commercial tenants and five lease renewals for the commercial part of the community and said there are more transactions in the works.

Now that Questar has been announced, community residents say they are curious to see what grocery store Caves Valley brings in.

Residents are also buzzing about the possibility that The Prime Rib restaurant might move from Mount Vernon to Cross Keys, but it has not been announced as a tenant.

During the UDAAP presentation, Questar’s Zach Gorn outlined his 90-year-old company’s background and experience in building luxury apartments such as the ones proposed for Cross Keys.

“Creating luxury multi-family developments has kind of become our bread-and-butter and our specialty,” he explained. “We’ve developed over 13,000 homes and apartments in the state of Maryland, most of which have been either in Baltimore or the surrounding counties.”

“Our very first apartment community, we developed in 1959 and we actually sold that community to Jim Rouse”  – Zach Gorn.

Questar also has a historic connection to Cross Keys and its original developer, James Rouse of The Rouse Company.

Gorn said Questar was originally called Gorn Brothers, named after his grandfather Morty and his great-uncle Sam Gorn, and they completed their first apartment development in the 1950s, back when Rouse was just starting the company that eventually built Cross Keys.

“Our very first apartment community, we developed in 1959 and we actually sold that community to Jim Rouse,” Gorn said. “As it turns out, that was the first acquisition of a piece of investment real estate that Jim Rouse and the Rouse Company made as Jim was transitioning from being a mortgage banker to the visionary real estate developer that he ultimately became.”

It was a few years later, in the early 1960s, “that The Rouse Company acquired the Village of Cross Keys site from the Baltimore Country Club and went about creating this really iconic mixed-use community that has been such an important part of the fabric of northern Baltimore City over the last 60 years,” he said.

Gorn said he is personally familiar with Cross Keys from playing in the tennis barn that is on the site where his company is now planning to build the apartments.

“To have the opportunity now to redevelop that site is something that’s really special,” he said.