Baltimore Mayor Brandon Scott today vetoed the Security Deposit Alternatives bill, saying a provision in it “can hurt the very people it is intended to help.”

Scott’s action brought quick praise from the critics who have been imploring him to veto the measure, but condemnation from City Council President Nick Mosby, who denounced the veto as “modern-day redlining with an outsized impact by a vocal advocacy class.”

“When we’re talking about working-class folks – predominantly Black – somehow a product becomes nefarious and predatory,” he said in a statement released tonight.

“This is what structural racism looks like in practice: Government’s role turns paternalistic when it comes to poor Black people.

“We must not abandon the path that is right for the majority in our city in favor of a few who believe we need to protect our residents from themselves.”

The charge drew fire from supporters of the veto who have noted that the coalition opposing the bill, organized by Baltimore Renters United, is diverse and includes longtime advocacy groups for low-income communities, consumers and the homeless.

“Council President Nick Mosby is really reaching on this one and should retract his statement calling the Mayor’s veto ‘modern-day redlining,’” Tre Murphy of Organizing Black, said on Twitter.

“Regardless of politics involved, to make this incendiary statement is disrespectful to Black Baltimoreans still suffering these effects,” said Murphy, whose group released a lengthy statement today supporting a veto.

The response from the RealNews Network’s Lisa Snowden McCray was even more withering. 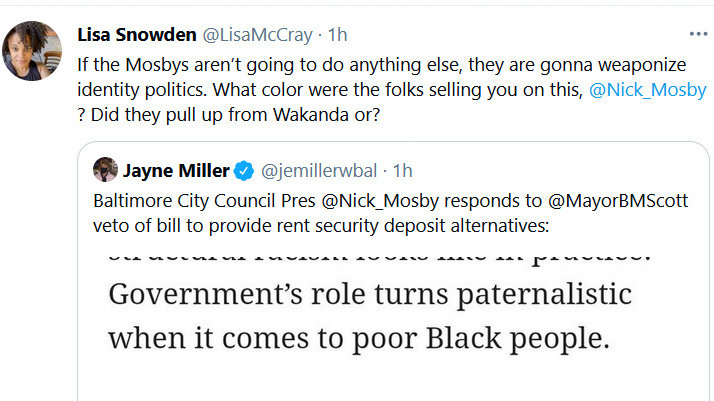 “Calling not giving residents a terrible choice offered by predatory rich white vultures ‘redlining’ is bonkers,” he said on Twitter.

Dr. Lawrence Brown, author of “The Black Butterfly,” had sharp comments for Mosby as well, declaring himself “a proud card-carrying member of the ‘vocal advocacy class,’” along with, “last I checked, freedom fighters such as Walter P. Carter, Fannie Lou Hamer, Dr. King, and Ida B. Wells.”

Scott’s announcement, released minutes after the 5 p.m. deadline when the bill would have become law without his signature, came as a happy surprise to observers who were awaiting news that came down to the wire.

Many lauded Scott: “You did the right thing!” @DeNarde4MDDel tweeted. “Didn’t see this coming!” @tonyxwashington marveled.

But many more lauded the activists who pushed a mayor widely believed to be reluctant to challenge Mosby who, with Middleton, has been boosting Bill 21-0022 energetically on social media, in radio interviews and through op-eds.

“I am absolutely ecstatic that such a huge swath of Baltimore came together and showed its strength,” said Caitlin Goldblatt, a leader of the coalition group, Baltimore Renters United.

Poking Scott and various Council members online, holding rallies outside City Hall and drumming up opposition emails and phone calls, the activists persuaded nearly 50 groups, including the Public Justice Center, Not Without Black Women and the Baltimore Teachers Union, to sign onto a call for a veto.

They asked Mosby and Middleton substantive questions about the bill at an online Town Hall that were never answered. They researched Rhino, the hedge fund-backed company whose renters insurance product is promoted under the bill. They obtained a damning internal video from Rhino’s sales division that the company quickly took down.

Over the weekend, with new revelations emerging in a Brew article about the influence of a Rhino lobbyist in the drafting of the bill, insiders said Scott was open to considering a veto. 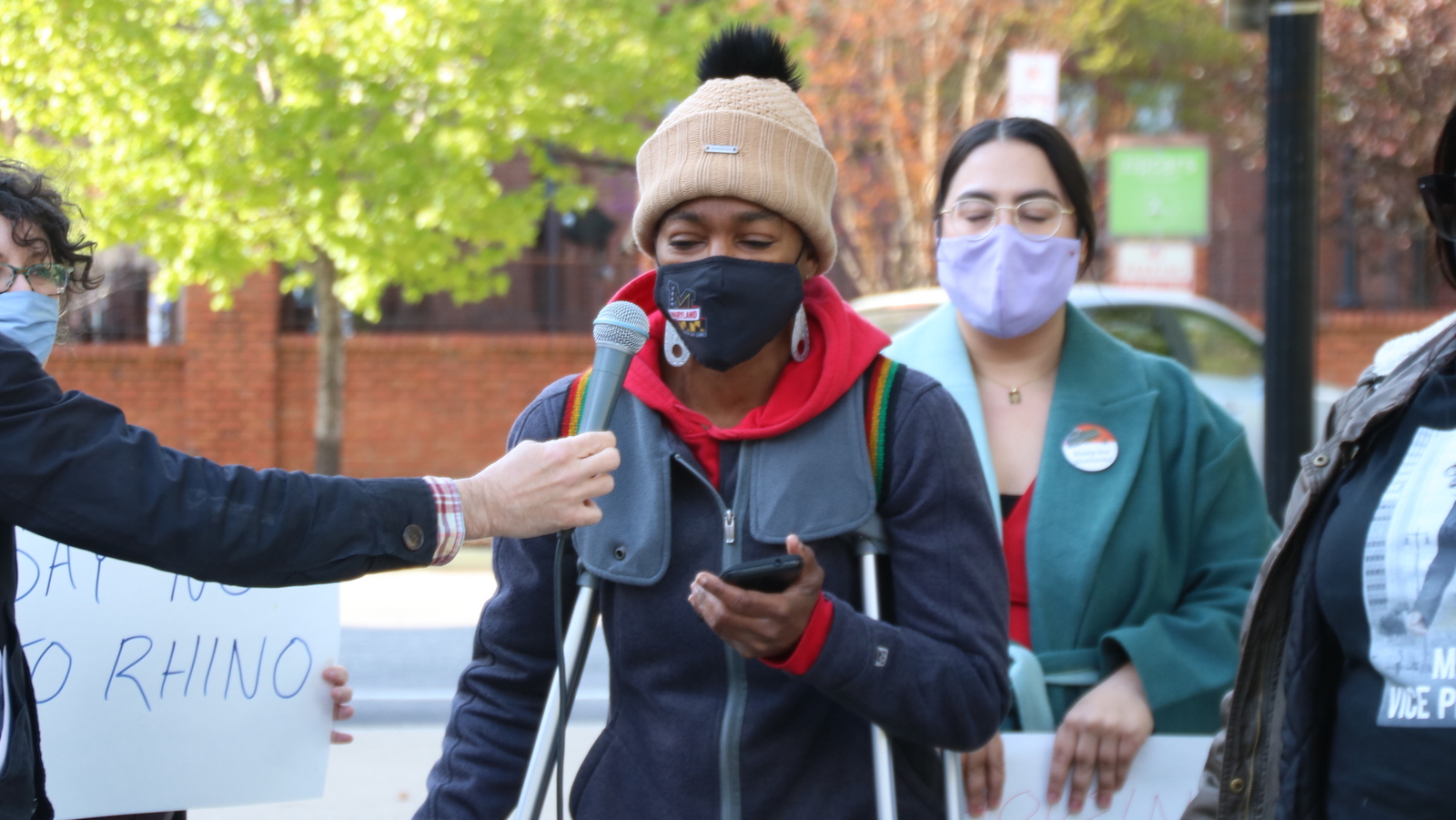 Tisha Guthrie, of the Bolton House Residents Association, last month calls on the mayor to veto the bill. To her left, Caitlin Goldblatt,of the Greater Baltimore chapter of the Democratic Socialists of America, listens. (Fern Shen)

Scott’s 11th hour announcement came after a day of intense negotiations among the parties, including a face-saving compromise that would have allowed the bill to be sent back for amendments and brought back for a re-vote.

Middleton agreed to the compromise plan in principle and brought it back to Mosby for his consideration. He and staffer Nikki Thompson turned it down, sources tell The Brew.

Now attention turns to the question of a veto override, which would take place at the next Council meeting to be held on Tuesday, June 8, at 2 p.m.

Whether the veto will be overturned will be the next chapter in what has turned into one of the year’s most intense City Hall dramas.

Thanks to a charter amendment approved by voters last November, only two-thirds majority vote is needed to override a veto, dropping the number from 12 to 10.

Presuming Cohen and Dorsey support the veto, and Burnett again abstains, if three more members abstained or voted no on the override it would fail.

“I greatly respect the work of the Council to improve the conditions for renters in the city,” he said, adding said he wants to work with Middleton “to bring together stakeholders, including the NAACP and Public Justice Center.”

Scott’s statement did not mention Mosby or the override, but Dorsey, commenting online tonight, pointed to the next chapter of the saga.

“I believe this veto will be sustained by the Council,” he wrote, “And I look forward to working with my colleagues and the mayor’s office to ensure that it is.”