What business rivals said was too good to be true – a bid by a Chicago firm to manage three city-owned parking garages for three years for only $36 – has turned out to be exactly that.

Tomorrow, the Board of Estimates will be asked to increase the price of the parking award to SP Plus Corporation from $36 to $7,500,000.

Mistakes were made, the city’s procurement office now acknowledges in a note to the BOE.

UPDATE: The city’s procurement chief, Keasha Brown, has called the failure to include operating expenses “an oversight – a very huge oversight.” She blamed the mistake on her predecessor, Erin Sher Smyth, while veteran Parking Authority Director Peter Little blamed it on a “clerical error.” FULL STORY.

The award letter approved in 2019 by the board “incorrectly requested the management fee only,” says the written explanation in tomorrow’s agenda.

But what should have been approved was the management fee plus operating expenses, which increase the contract’s cost exponentially. (See page 45 of agenda here.)

The BOE was warned that SP Plus’ management fee structure was way too low in testimony in 2019.

Such a bid, if accepted by the city, will be “a tsunami for small local parking companies as it will wipe them out from the city,” Abebe told the board.

“This type of abnormal pricing is completely unfeasible and grounds for predatory pricing”  – Moges Abebe of Dana Enterprises.

Likewise, Gordon Feinblatt attorney Margaret Witherup, said, “It may look good in the short run to have a price proposal that is so low . . . [but] I think there’s a very real concern here that an unreasonably low management fee is going to affect performance.”

What’s more, a contract addendum ignored during the deliberations noted that the price submitted to the board would  only include “profit and administrative fees that are not reimbursed.”

SP Plus bid just pennies a month as the management fee to operate three downtown garages for three years. (From BOE minutes, June 5, 2019)

Pushing for approval was ex-city purchasing agent Erin Sher Smyth. “This will reflect a considerable savings for the city to award it now and, additionally, there are no open issues that I am aware of that we would need to consider,” she told the board.

(Smyth left city government after an Inspector General report about her alleged mishandling of a towing contract.)

“We were very clear about that, and this price was considered reasonable” – ex-Purchasing Agent Erin Sher Smyth.

The board was further reassured by Alex Schuller, regional manager of SP Plus, who explained how the company would reap profits from the $36 contract during an exchange with then-Comptroller Joan Pratt: 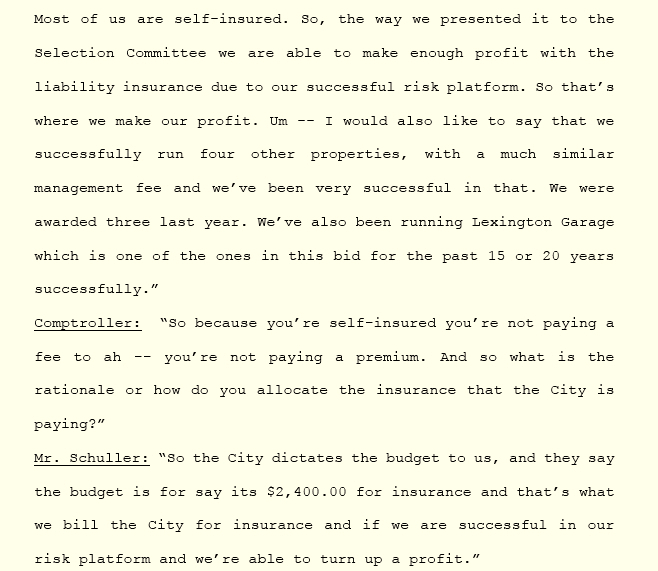 Regional Manager Alex Schuller explains how SP Plus can “turn up a profit.” Minutes later, the BOE awarded the contract. (Minutes of BOE meeting, June 5, 2019)

All four no longer work in city government.

Brandon Scott, who was then City Council president and now is mayor, abstained from the vote.

As of now, the $7.5 million increase has been placed on tomorrow’s non-routine agenda.

This indicates that the price hike will come under scrutiny from Nick Mosby, BOE president, and perhaps other members of the spending board – Mayor Scott, Comptroller Bill Henry, Acting Public Works Director Jason Mitchell and City Solicitor Jim Shea.