Twenty-one years ago, Carolyn Shoemaker and her neighbors faced down drug dealers to reclaim their small but historically significant slice of Poppleton – a rainbow of pastel-colored alley houses inhabited by Black families since just after the Civil War.

A Baltimore Sun article in 2000 lauded their victory over urban decay and crime as “an example of how a small community can reclaim its right to simple pleasures.”

Children still play on the narrow street and adults (and cats) gather under shade trees next to a community-built playground, seemingly a world away from the kicked-in doors and trash-filled lots of nearby blocks.

But all is not well on the 1100 block of Sarah Ann Street. An implacable force looms over its proud residents, set to change their lives forever.

“They told us we all gotta go,” said Shoemaker, speaking of the Baltimore Department of Housing and Community Development.

Shoemaker has lived on the block, lined with two-bay, two-story houses, since 1995. But after HCD purchased the row from landlord Helen Hunt last year (at a cost of $200,000), Shoemaker says she has no option but to move.

She and other residents are angry about the forced displacement of a close-knit Black community to accommodate the plans of La Cité Development, a group of New York investors given rights to 14 acres of Poppleton in 2005.

Since then, the developer has been embroiled more in controversy than construction (here and here).

So far, it has completed and partly leased two apartment buildings – out of 30 buildings planned – despite $58 million in approved tax increment (TIF) public financing.

Such slow progress, however, has not stopped HCD from purchasing, demolishing and handing over to the developer hundreds of private properties far in advance of any pending redvelopment. 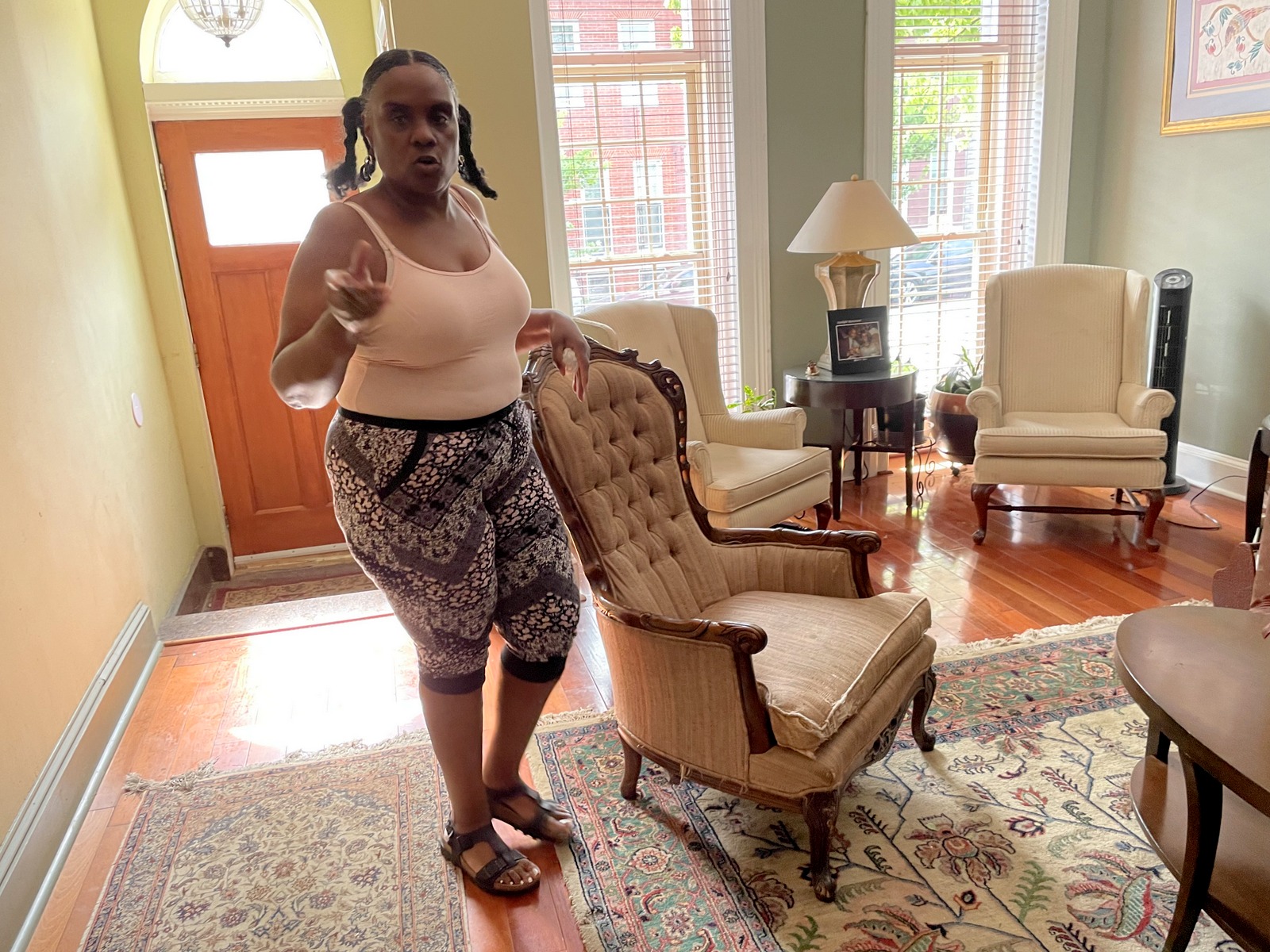 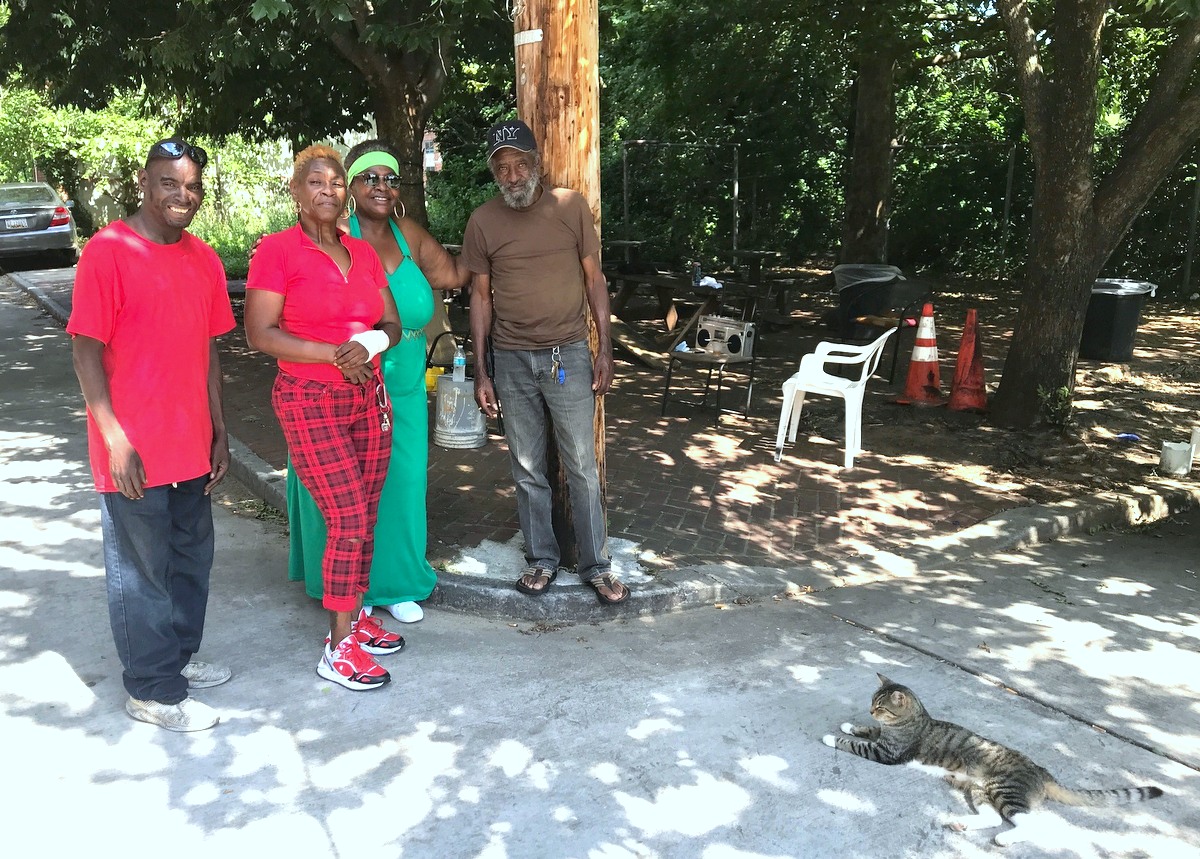 “Save Our Block” Rally

Protests over HCD’s actions have recently coalesced around the city’s condemnation proceedings against Sonia and Curtis Eaddy, who own a house on Carrollton Avenue next to the Sarah Ann dwellings.

On Saturday (July 10) residents and their allies will hold a “Save Our Block” rally between 6-8 p.m. at the community-maintained Sarah Ann Park at 317 North Carrollton.

They are circulating an online petition that calls on HCD to preserve what remains of Poppleton for its current residents. “We demand that the City of Baltimore stop enabling La Cité Development’s displacement of longtime residents in the name of a wasteful redevelopment project.”

The petition says HCD has “exploited” its power of eminent domain to acquire 169 privately owned parcels on behalf of La Cité, the vast majority of them occupied.

Advocates for the tenants say Councilman John Bullock has responded to emails and participated in a recent walk through with Eric Holcomb, executive director of CHAP (Commission for Historical and Architectural Preservation).

Despite all the talk of “equity” by city officials, none has responded to residents’ invitation to attend the Saturday rally and hear their concerns.

“Am always holding out hope our political leaders will be responsive,” King said ruefully yesterday.

No elected official has responded to the invitation to attend the rally and hear residents’ concerns, King said, despite all the talk from City Hall about “equity” and redirecting resources to historically disadvantaged Black communities.

“No one will tell community members what is moving forward, when and why. I think the city is abdicating its role to represent and fight for its constituents,” she said. 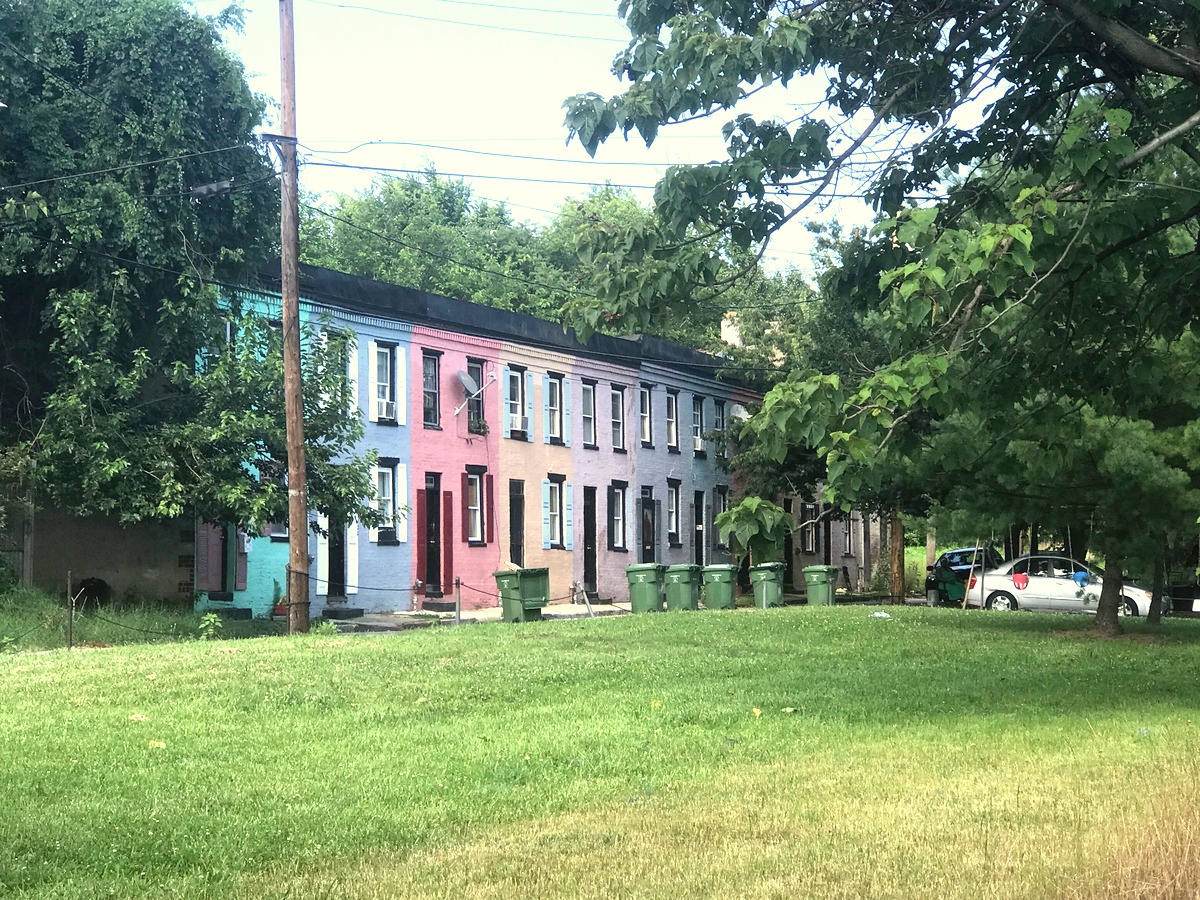 The 1100 block of Sarah Ann Street, tucked between Saratoga and Mulberry streets, is tidy in front and rear. (Mark Reutter) 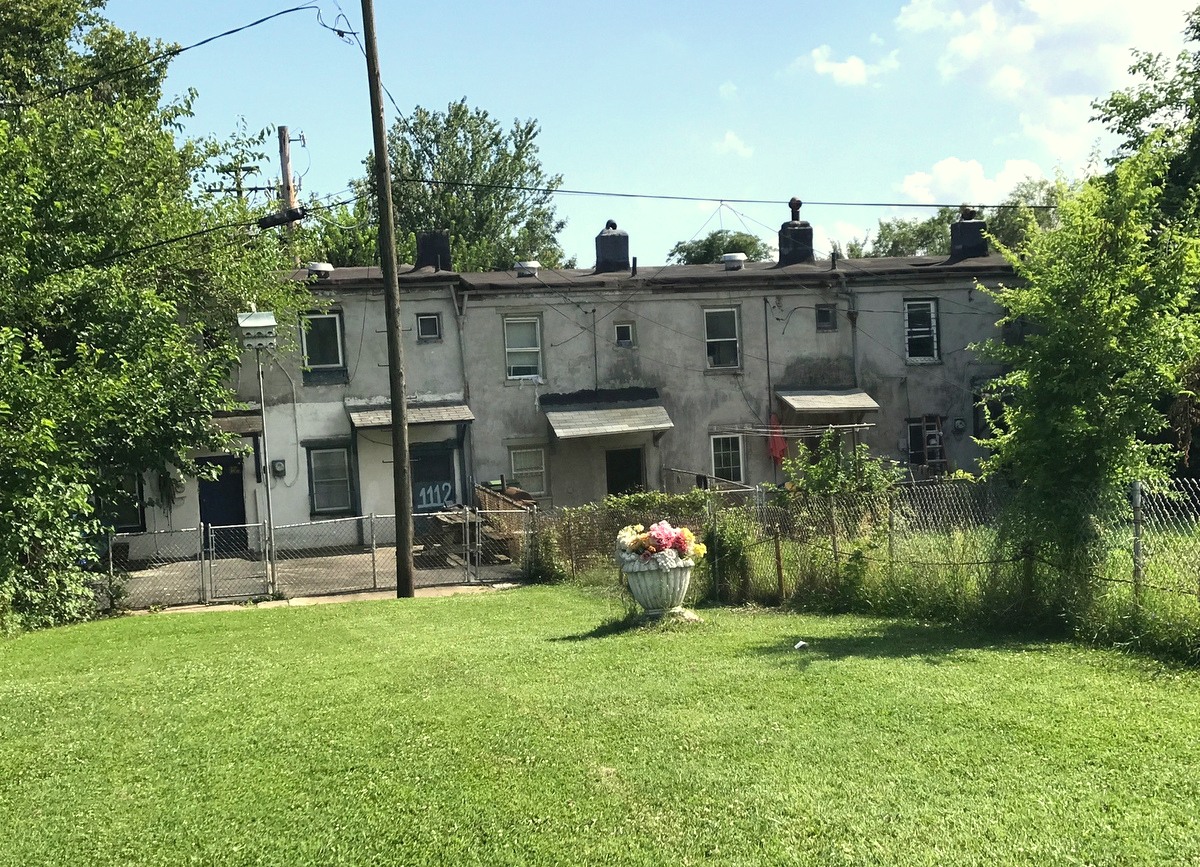 The Question of Demolition

In 2007, former Mayor Sheila Dixon, HCD and La Cité signed an agreement with the Maryland Historic Trust calling for the preservation of the Sarah Ann houses and several other historic Poppleton structures.

The agreement was renewed by Mayor Stephanie Rawlings-Blake in 2016, but expires at the end of this year, opening the possibility that the houses could be destroyed.

La Cité, whose president is Daniel Bythewood Jr. (son of the company’s orthodontist founder), says it will build 1,800 new units on cleared Poppleton land over the next 20 years. That’s down from the original promise of 3,000 units.

Shoemaker and other residents, like Jerome Phillips and Vanessa McBride, are convinced the city will level their homes once they leave, either directly or through “demolition by neglect.”

Kevin Nash, spokesman for HCD, says that is not the case. “This block is historic, so the houses can’t be demolished.”

Nash objected to the use of the word “evicted” to describe the fate of the Sarah Ann residents. “No one on the block is being evicted,” he said.

Instead, he explained, a few tenants moved prior to the city acquiring the buildings. “Additionally, there are tenants who have been relocated or who have received an entitlement amount, so they are looking for new homes,” he noted in a statement to The Brew.

A March 17, 2021 letter from HCD notified Shoemaker that “it will be necessary for you to relocate” to make way for the “proposed development plans for Poppleton.”

It went on to say that she would be entitled to relocation payments and other assistance after acting on a 90-day written notice that “you must vacate” the property. 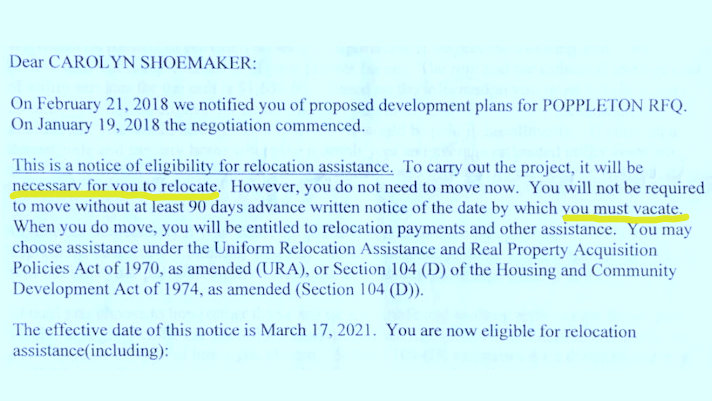 March 17, 2021 letter from Baltimore HCD to Carolyn Shoemaker, saying “you must vacate.”

Shoemaker said she found a house near Mondawmin Mall, but it still doesn’t feel right.

“After we run off them drug dealers, this street became so peaceful and quiet,” she said, sitting across the alley from her house, tan painted with sky-blue shutters – one of the rainbow of colors found on the historic block.

“Our landlady, Miss Hunt, painted our houses so they look nice. We built our own park, swings and all, for the children. Everyone is neighborly cause we know each other. So I really don’t want to move.”

If all goes as planned, she’ll be in her new rented house late next week. 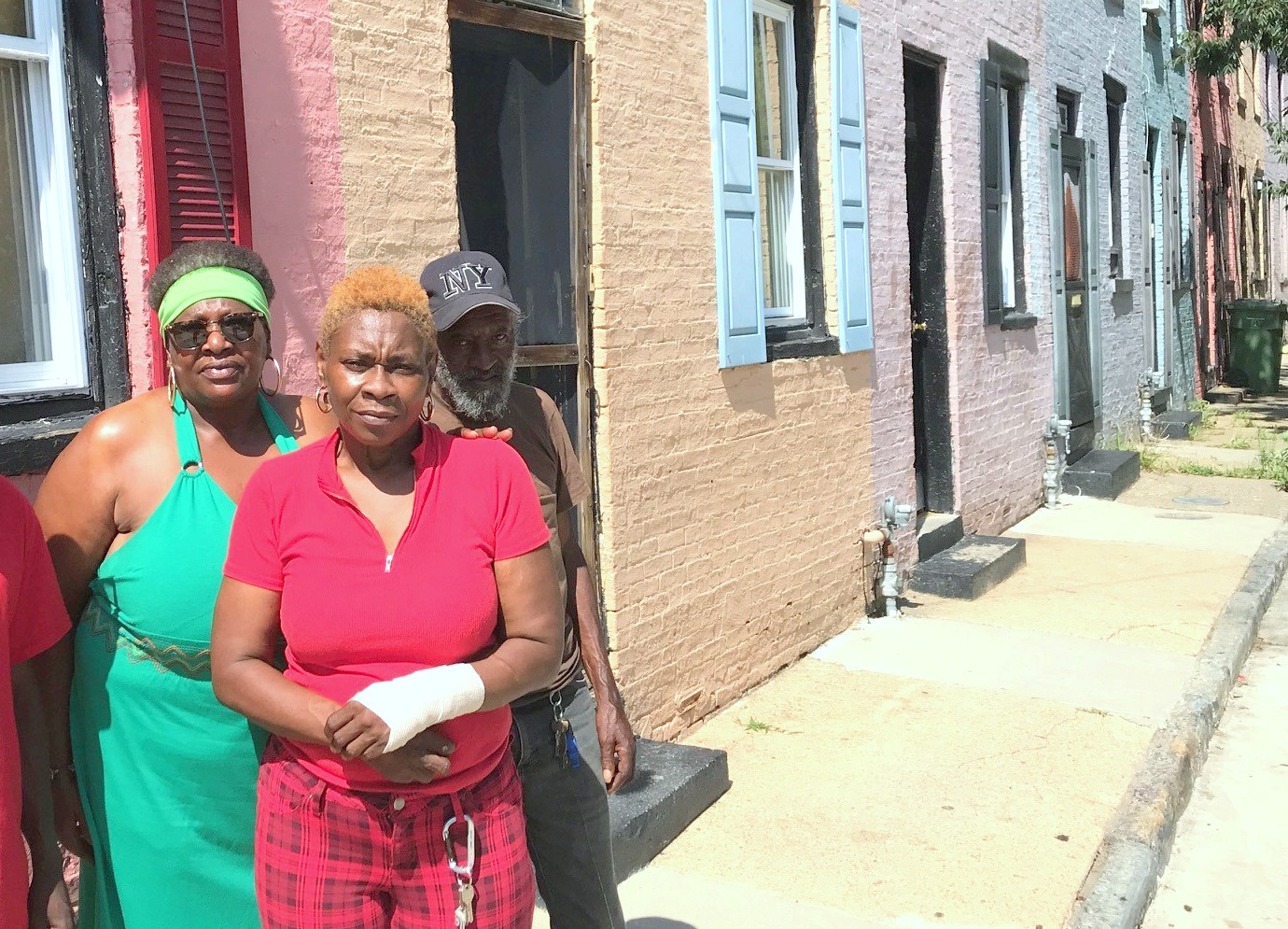 Vanessa McBride is flanked by Carolyn Shoemaker and Bobby Shackleford next to the houses they will soon have to vacate. (Mark Reutter)