When it opened 62 years ago, the Druid Health District Building was the pride of West Baltimore.

It contained the medical clinics of Dr. H. Maceo Williams, a Baltimore native who, in 1939, broke the color barrier that had prevented Black doctors from working for the city health department.

Over the next three decades, first from a onetime orphanage on Druid Hill Avenue and later from the new district building at 1515 West North Avenue, Williams launched a multitude of programs to improve the health outcomes of Black Baltimoreans.

Williams taught prospective mothers the importance of diet and prenatal care and supervised the operation of prenatal, venereal disease and well-baby clinics.

He mounted one of the first campaigns against the dangers to children of lead paint poisoning and inoculated and treated over 10,000 cases of tuberculosis, helping end a scourge that had afflicted Black neighborhoods at four times the rate of the city’s white population.

“My main concern has always been for the children of my district,” Williams said in a 1966 interview.

Today the building where he worked – and which was later named in his honor – is in a shambles. 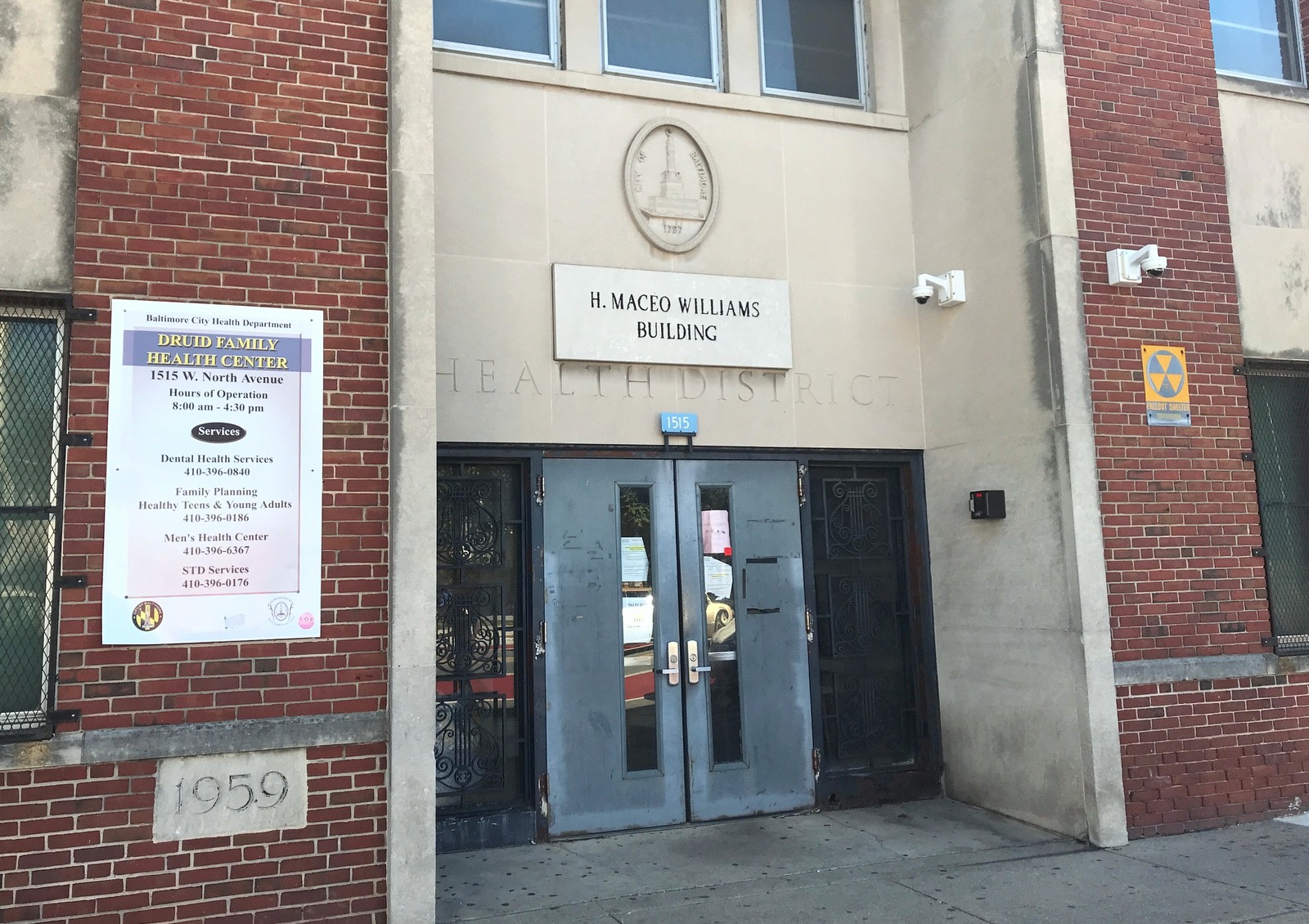 Entrance to the H. Maceo Williams Building, which provides STD testing, prenatal care for teen moms, dental care and services for vulnerable populations. BELOW: Recycling stacked up yesterday in the front foyer. (Both: Mark Reutter) 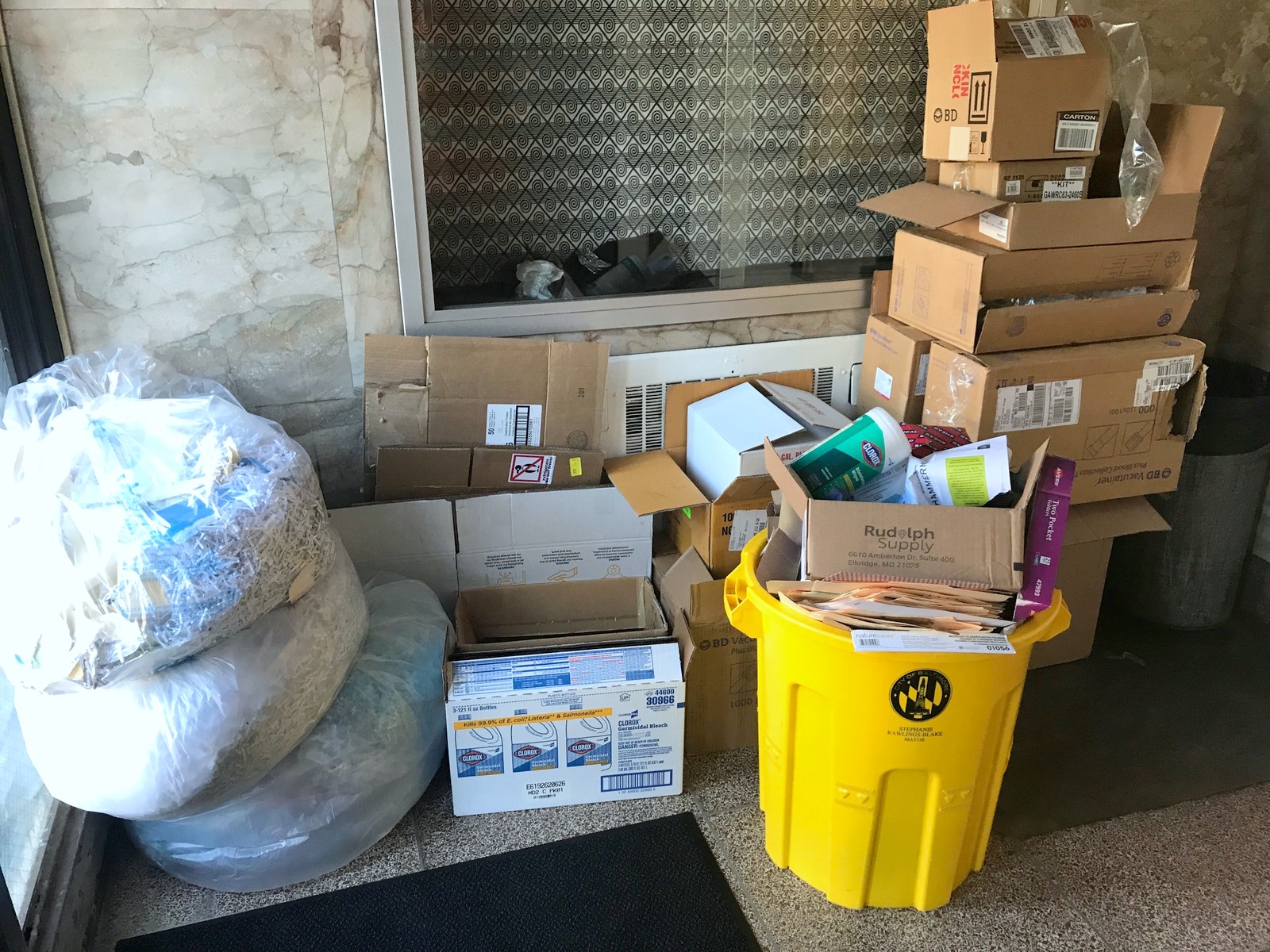 Used as the city’s main sexual health clinic, patients and staff alike are exposed to unsanitary and substandard conditions, a report issued yesterday by the Office of the Inspector General (OIG) says.

Inspectors who conducted a site visit last December – in the middle of the Covid-19 pandemic – found unsanitary conditions ranging from dead rats in the basement supply room (“accompanied by a foul odor”) and garbage overflowing from an outside dumpster to water leaks in the restroom and missing ceiling tiles everywhere.

“Unhealthy work situations that are not handled satisfactorily by the city could become the subject of a union grievance,” she noted, especially given the heightened health concerns over the spread of Covid.

Indoor temperatures of 90° were reported on a March day.

Making matter worse, the clinic was subject to wide fluctuations of heat and cold due to a malfunctioning boiler and air conditioning system.

“One Baltimore City Health Department employee reported the indoor temperature to be 90°F on a workday in March 2021. During the OIG site visit, the office temperature was higher than the thermostat setting in the staff office area.”

Several employees reported that rapid tests for HIV and HCV (hepatitis C) were sometimes halted because it was too hot for accurate test results and proper test kit storage. 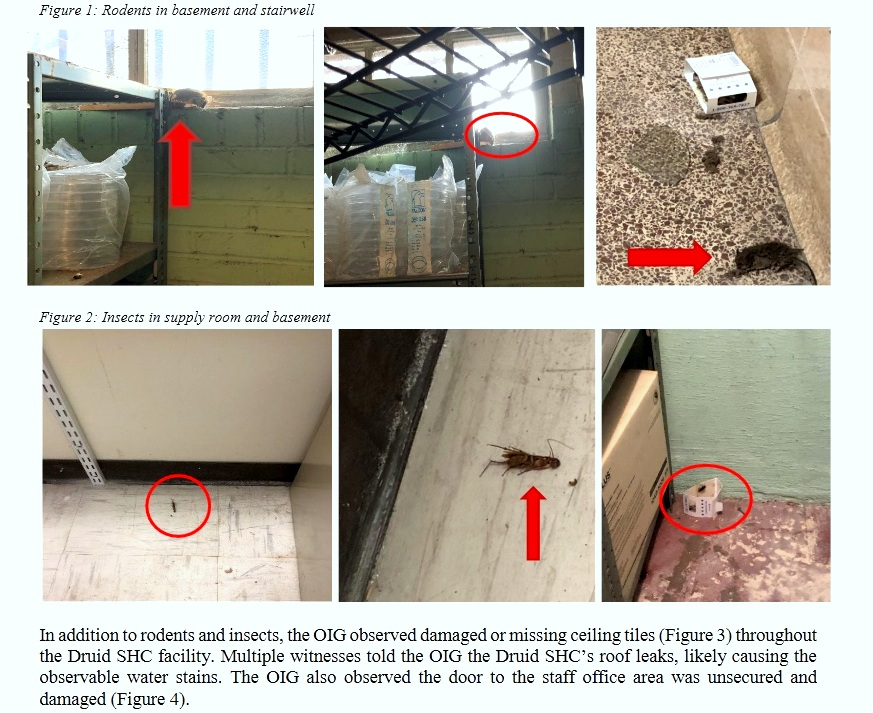 (From OIG Report Synopsis of the Druid Sexual Health Clinic)

During the site visit, inspectors noticed boxes of HIV and HCV tests that were marked “expired.”

In a written response to the finding, Baltimore Health Commissioner Letitia Dzirasa acknowledged that test kits “did expire” at the clinic due to “temperature fluctuations.”

But saying her department strictly adheres to Maryland public health protocols, Dzirasa said the expired kits are clearly marked and used only for staffing training.

As to fixing the underlying problem, Dzirasa said her agency has “an open work order” with the Department of General Services to install air conditioning in the lab room “to ensure appropriate temperatures are maintained to house test kids and reagents.”

Regarding rodent and pest control, the inspectors were told that rat infestation was the result of local residents and businesses discarding trash in the dumpster, causing it to overflow.

The city has installed a fence around the dumpster and now collects the trash twice a week, but the rat problem continues because trash is now being dumped outside the fence, according to Dzirasa.

“One possible and unfortunately expensive solution is to add a mobile security patrol after-hours route,” she said. Another is to call on the housing department to install surveillance cameras near the dumpster.

Various bureaucratic complications dog the health department in its attempts to clean up the building, the OIG reported.

For example, the clinic employs a vendor to come in every two weeks to install and remove rat traps in the building. But a separate vendor, handling daily janitorial services, refuses to remove the dead rodents in between the visits, saying it is outside the scope of his contract.

“To date, this effort has had minimal impact on the rodent issue”  – Commissioner Dzirasa.

Saying that “BCHD has communicated these issues to DGS with hopes of expeditious resolution,” Dzirasa added this explanation in her response:

“In hopes of a temporary resolution to the pest issues, BCHD clinical staff cleared out storage areas in the basement of the building in April/May 2021. To date, this effort has had minimal impact on the rodent issue. Over the next two weeks, DGS will perform an onsite inspection to also identify and eliminate potential rodent points of entry.”

Last December, during the same month that the OIG made its inspection, the building’s boiler “finally gave out,” Dzirasa said.

A temporary boiler was installed but overheated and otherwise malfunctioned. In late January, the health department thought it had solved the problem by providing a “right of entry” to DGS to allow a private vendor to install a custom-built boiler.

“The boiler installation is pending resolution of the vendor’s business license [and] ultimately may not be a long-term solution”  – Commissioner Dzirasa.

But the housing department wouldn’t issue a work permit owing to questions about “the validity of the vendor’s business license,” Dzirasa said.

As a result, “the boiler installation is pending resolution of the vendor’s business license,” while the custom boiler remains in storage and “ultimately may not be a long-term solution.”

In the meantime, General Services had been working with another vendor to fulfill a request for air conditioning units in the building.

The building, in fact, doesn’t need a few AC units, but a totally new HVAC system, according to Dzirasa. And getting that accomplished won’t be fast nor cheap.

The health department’s FY22 capital improvement budget includes a request for $150,000 to cover the design fees for a partial HVAC system upgrade.

Another $700,000 for the actual construction of a new system is being weighed as a budget item for FY23.

The ultimate solution may be for the Scott administration to conclude that the H. Maceo Williams Building has served its useful life, Dzirasa said.

Under this scenario, the city could purchase another building – perhaps using some of the $640 million released to Baltimore under the American Rescue Plan Act – “that can be built-out to house a newly relocated Druid Health Center,” she noted.

Excerpted from the “151st Annual Report of the Baltimore Health Department”: 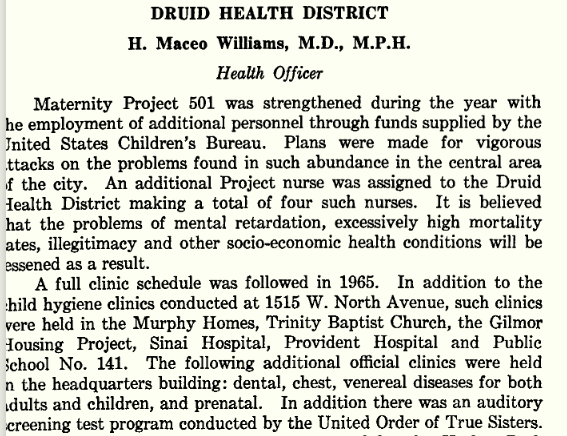 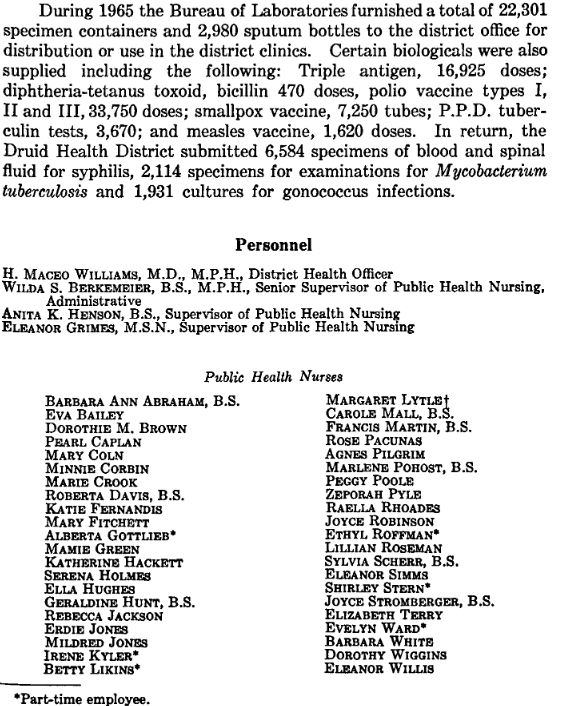