When Nick Mosby asked the City Council he heads to fast-forward Councilman Eric Costello’s digital billboard bill Monday night despite residents’ complaints that they hadn’t been notified about it, no reason for the unusual legislative maneuver was offered.

The explanation for the speed up became clearer yesterday at the annual meeting of the Downtown Partnership of Baltimore (DPOB), a festive evening of nibbles, networking and applause for efforts to boost an ailing central business district.

Addressing the gathering, Costello spoke of legislation that he introduced to strengthen the district – bills to reauthorize existing tax credits for historic preservation and downtown development, culminating with the digital billboard measure.

There was more. Following a parade of awards to companies for innovation and community projects came the President’s Award, the recipient of which had not been publicly disclosed.

“This person prepares every single thing that they do, right?” said Mosby, who joined Scott onstage to tease the announcement. “This is a person that, if they know a solution is behind a brick wall, they’re going to run right through it.”

At last, DPOB President Shelonda Stokes revealed the recipient of “our secret award.”

“This is my midnight talker, my downtown down-low partner. The man, the myth, the legend. Please join us, Councilman Eric Costello!” Stokes said, as the audience clapped enthusiastically.

The 11th District councilman came up to the microphone where he was met with a hug from Mosby.

“Thank you for the honor of allowing me to serve you,” Costello said. “I’m going to continue to wake up every day and just keep fighting for all of you.” 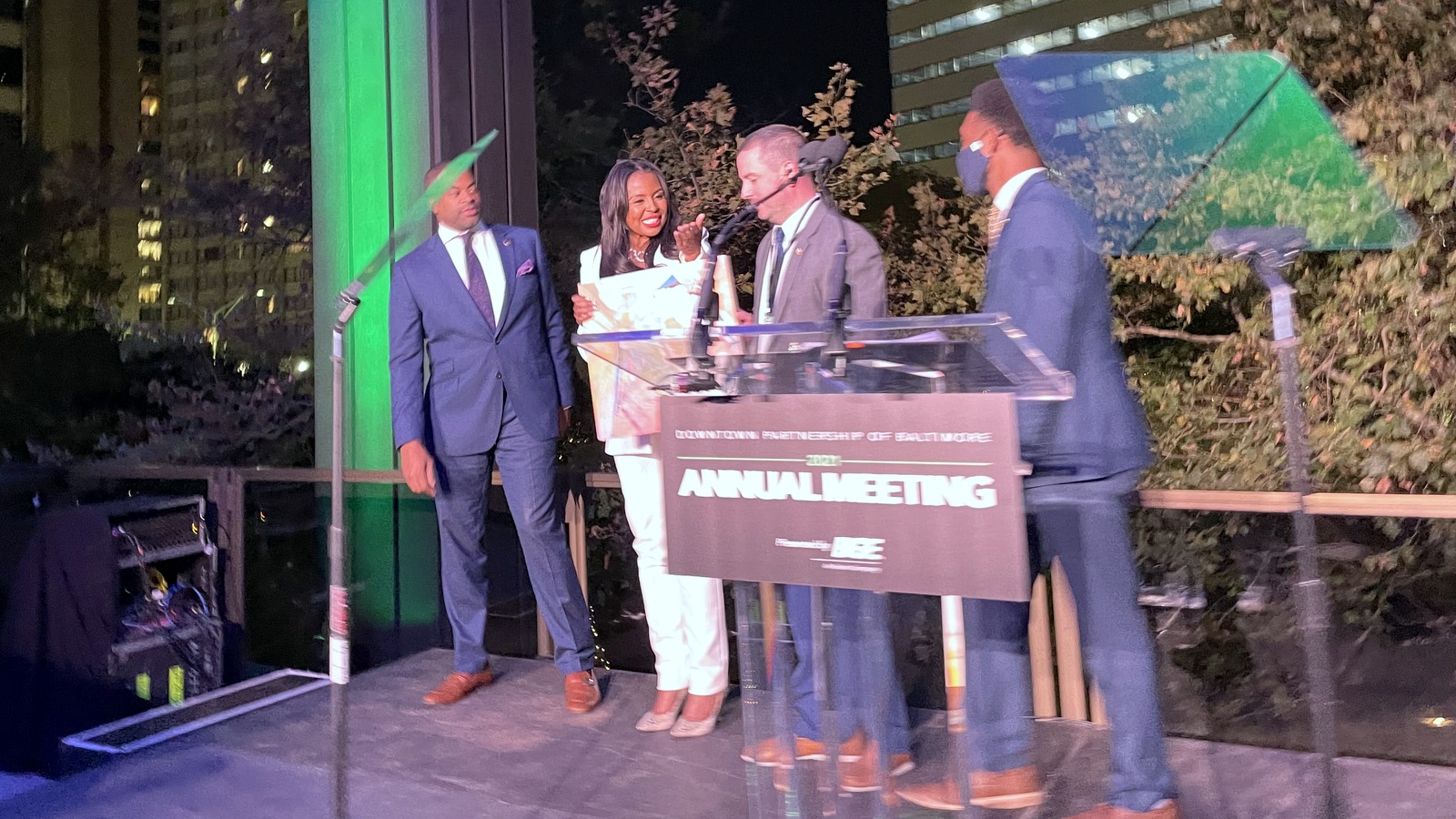 The plaudits for Costello came against the backdrop of a downtown whose economic troubles have worsened during the pandemic.

It took place in a landscape plagued with vacant storefronts and stalled projects. A report the DPOB released earlier in the year showed the central business district with a 24% vacancy rate.

Last night Mayor Scott spoke of his initiatives intended to help, including weekly public safety meetings and a tax credit review committee (to be chaired by Costello and Stokes).

By the end of the year, he promised, the city will have finished negotiations for the renovation of the Baltimore Arena, opened a new Rash Field, “and hopefully know the new developer of Harborplace.” 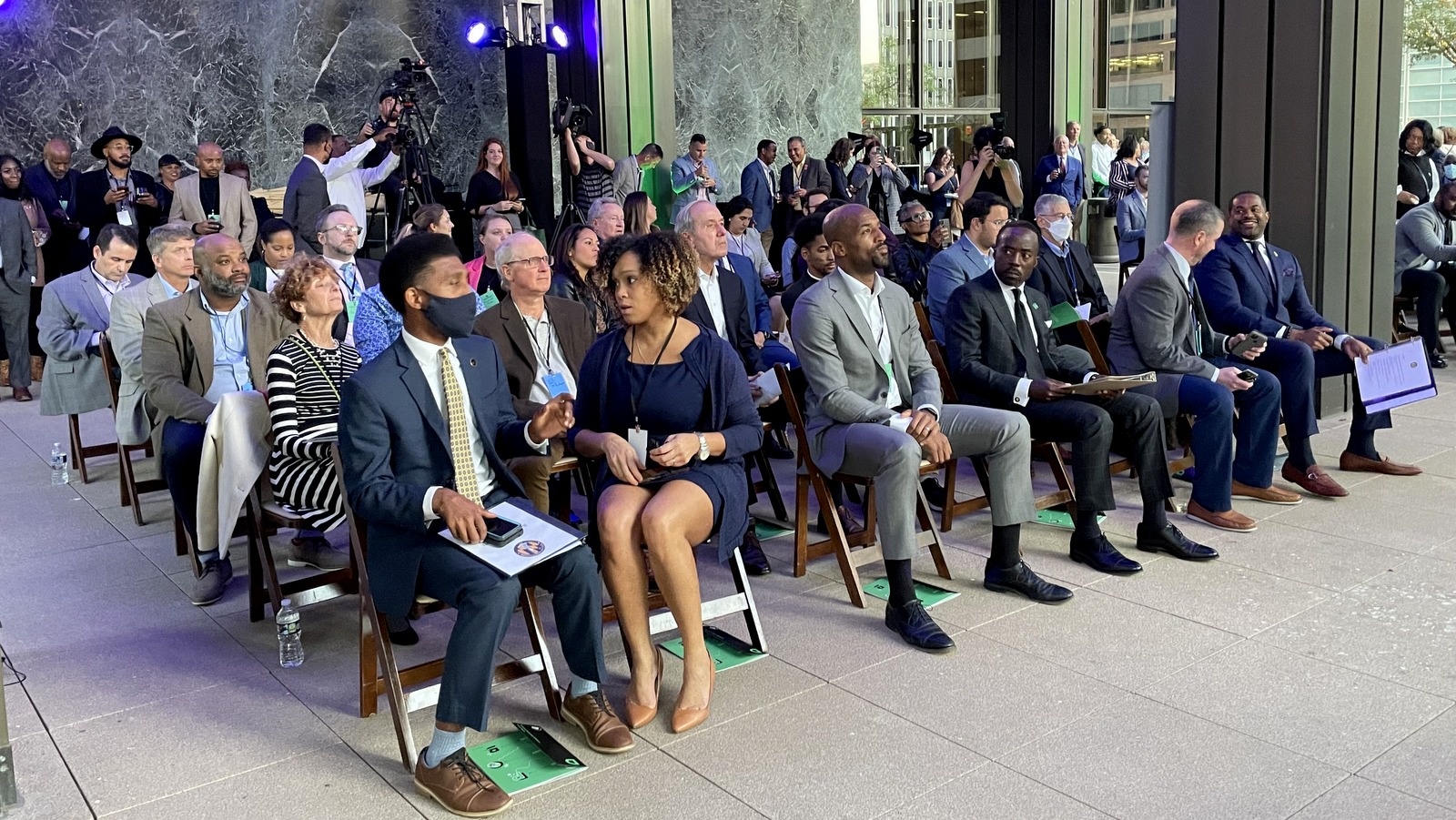 Mosby talked about strengthening downtown through public-private partnerships, noting, “It gets me so excited, the level of partnership we see in our city today.”

Stokes, meanwhile, provided a rundown of what the quasi-public DPOB is doing despite a drop in annual revenue to about $8 million (from previous levels that have hovered around $10 million).

“All of us took a 10% pay cut,” she said, noting that the organization received federal PPP money and “for the first time ever” has asked for state assistance. 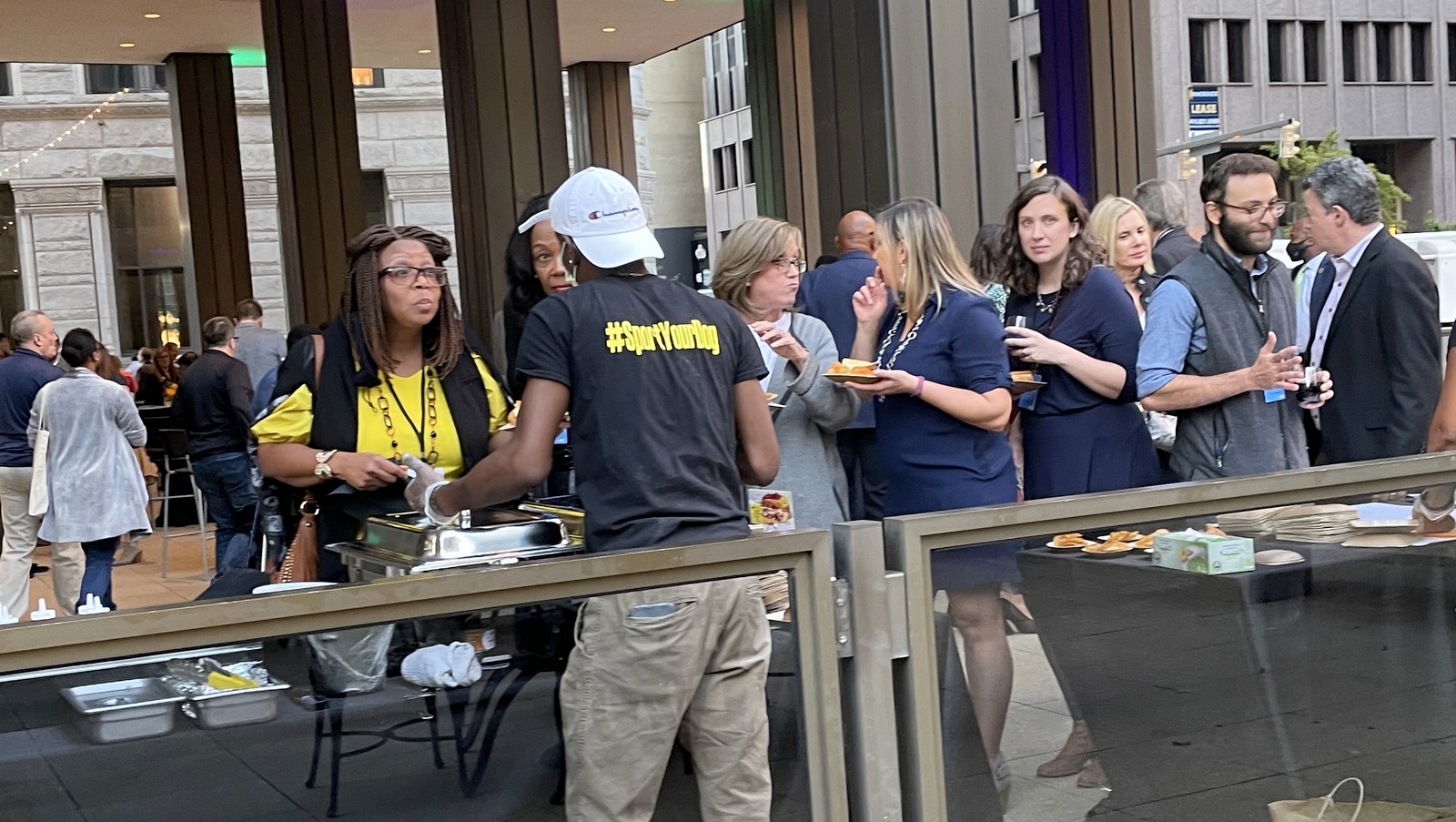 Stokes mentioned efforts to improve public safety (“we’re using data to map the security challenges”), touted the billboard program (“we’re talking about vibrancy”) and highlighted a new marketing campaign (“Double Down on Downtown”) aimed at creating a positive narrative and keeping companies from moving out of the city.

Recent announcements of major businesses and corporate headquarters leaving downtown include Pandora, Bank of America, Transamerica and T. Rowe Price. Along with the bankruptcy declaration and slow collapse of Harborplace, the Inner Harbor is losing the high-profile Gallery Mall, which recently announced plans to close.

“There’s been a shift. Businesses are going to east, to Harbor East, to Harbor Point, Port Covington,” Stokes said. “And all of that is OK. It’s staying in the city, which is great. But we have to protect the core as well.”

During his keynote address, Baltimore Ravens President Dick Cass seemed to touch on that concern as well.

The crowd listened intently as he described the team’s commitment to being in Baltimore and plans to renew its state lease to use M&T Bank Stadium.

“One thing I can tell you is, we’re not going anywhere,” he assured them.

“We will always be in that stadium,” he added to jubilant whoops and cheers.