Recent revelations should cause the board of directors of Baltimore’s Downtown Management Authority (DMA) to take a hard look at the conduct of Downtown Partnership of Baltimore, the private entity that administers the DMA, a public body established by city law.

The conduct was not unlawful but failed the smell test in a city where the odor of divided loyalties and self-dealing already has diminished public trust in government to an extraordinary degree.

No hard look by the DMA directors is likely, however, for reasons described below, including the little known fact that Mark Wasserman, an aide and architect of former Mayor William Donald Schaefer’s “shadow government,” serves as chair of both entities.

Before getting into the absence of an arms-length relationship between the DMA and the Partnership, here’s a quick review of the problematic conduct:

The Partnership (DPOB) angered many downtown residents with its aggressive promotion of a City Council bill that allows video billboards in a new special signage district in the central business district, a neighborhood becoming increasingly residential.

As the bill sped through the legislative process, a profit-sharing agreement between DPOB and unnamed media companies that install video billboards came to light.

Baltimore Planning Commissioner Tom Prevas expressed a legitimate concern: “It sounds like there is something behind the scenes, like there’s a private contract that is driving the deal, and I’m not feeling comfortable with it.”

DPOB compounded suspicions about its motives by refusing to disclose the terms and conditions of the agreement. 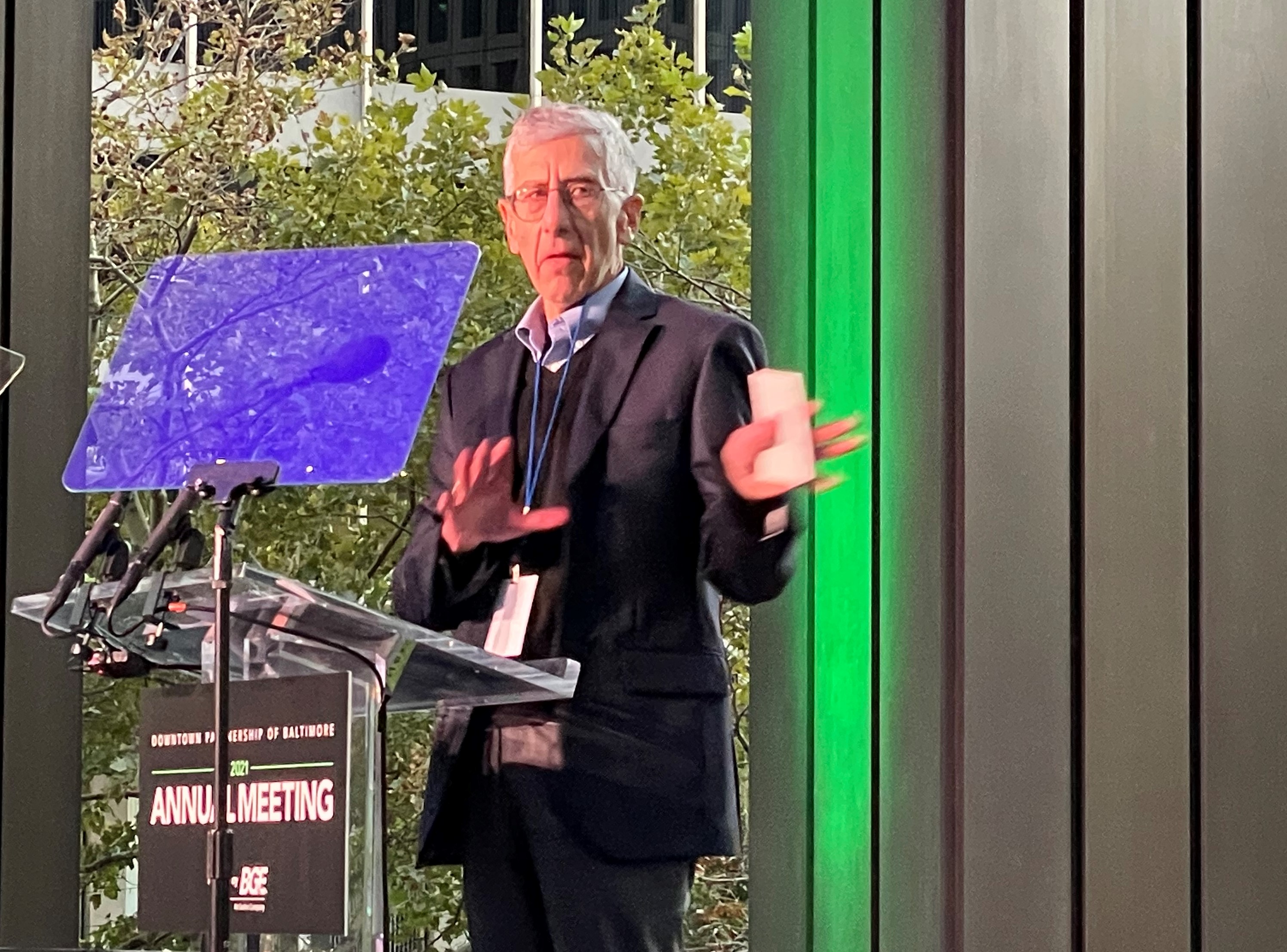 Alyssa Domzal, one of three outside lobbyists hired by Partnership, explained that as a private, nonprofit corporation, DPOB is not required to disclose its contracts with vendors when pursuing its own corporate interests and not acting on behalf of the DMA. The commission was told that the city law department concurred with her opinion.

The role of DPOB includes advocating for the interests of downtown property owners to the mayor and City Council.

That role is compromised if it appears that its advocacy is tainted by its own pecuniary interests. DPOB needs money – it cut the pay of its staff 10% because of recent financial struggles. Is the video billboard bill a good idea for downtown, or just for DPOB?

The second revelation was that Paul Sturm, who identifies himself as the chair of a small, informal grassroots group known as the “Downtown Residents Advocacy Network” (DRAN), was a paid consultant to DPOB. He enthusiastically endorsed video billboards on the group’s Facebook page.

There are serious questions whether DRAN represents any views other than Sturm’s. Nevertheless, DPOB touted DRAN on its website as one of the groups that it consulted about the video billboards bill.

It also invited DRAN to co-host a high-profile “dialogue” between its members and city politicians, including Mayor Brandon Scott and Council President Nick Mosby, last Thursday. 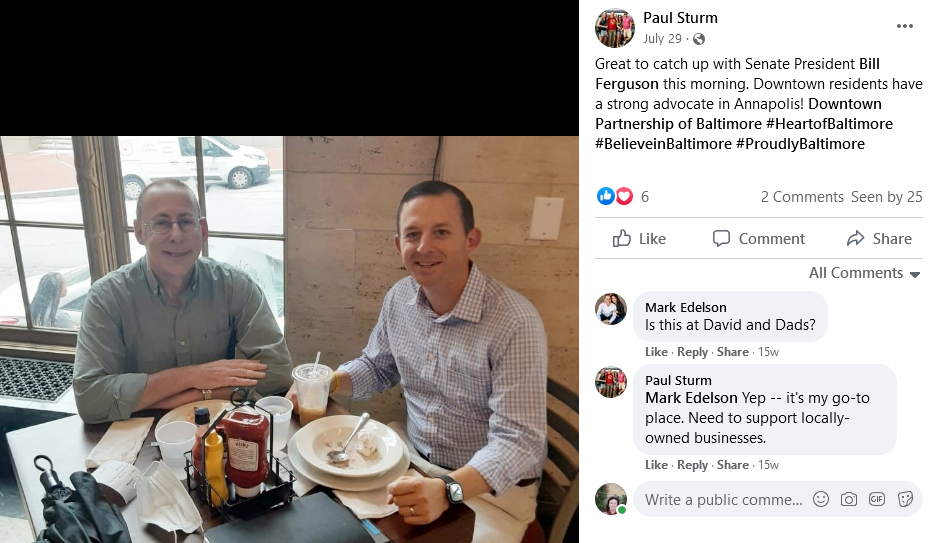 Paul Sturm lunches with Bill Ferguson, president of the Maryland Senate, in a photo posted in July. (Facebook)

Councilman Eric Costello, the bill’s sponsor, cited DRAN’s involvement in the billboard bill as an example of how DPOB has been engaging with the community.

Sturm denied that there was any quid pro quo or conflict between his employment by DPOB and his support of the digital billboard bill.

DPOB’s president and CEO, Shelonda Stokes, informed The Brew that among the services for which Sturm was paid was “to organize, take notes and capture feedback for three resident information sessions designed to solicit input, feedback and concerns about the Area of Special Sign Control.”

• After steering billboard bill to passage, Costello is honored by Downtown Partnership (10/2021)

The Partnership should have hired someone to “capture feedback” from downtown residents other than the chair of a group purportedly representing those residents. The impression given by this financial arrangement in the context of Sturm’s public role as chair of DRAN is unflattering to both Sturm and DPOB.

These two revelations give rise to an obvious question:

Did DPOB have a self-serving interest in getting the digital billboard bill passed as quickly as possible that caused it to resort to dubious measures to counter the opposition coming from organizations like the Center City Residents Association that could slow down the bill?

No laws may have been broken, but I believe that DPOB exhibited extremely poor judgment.

Chairman Wasserman is not alone. Three other members of the executive committee of DMA’s board – treasurer Carrie Schreiber and vice chairs Jeffrey Clary and Zed Smith – hold the same positions on DPOB’s board. Sister Helen Amos, executive chair of Mercy Medical Center, is another overlapping director and member of both executive committees. (Both boards have additional directors not included in these screenshots.)

Joined at the Hip

The problem is that the relationship is so close that arms-length discussions between DMA and DPOB about the conduct of DPOB are impossible.

The organization now known as DPOB was incorporated in 1983 to advance the interests of property owners in Baltimore’s commercial core. In 1992, DPOB successfully lobbied for legislation establishing the DMA as a special tax district vested with considerable governmental authority, including the power to impose and collect fees, taxes, and other charges.

The DPOB has been the administrator of the DMA since its creation, using a surcharge on the property tax paid by downtown property owners and other revenues to fund a wide variety of services, including maintenance, sanitation, and security.

More than 80% of DPOB’s budget comes from public funds and is spent on administering the DMA, dwarfing its other activities. 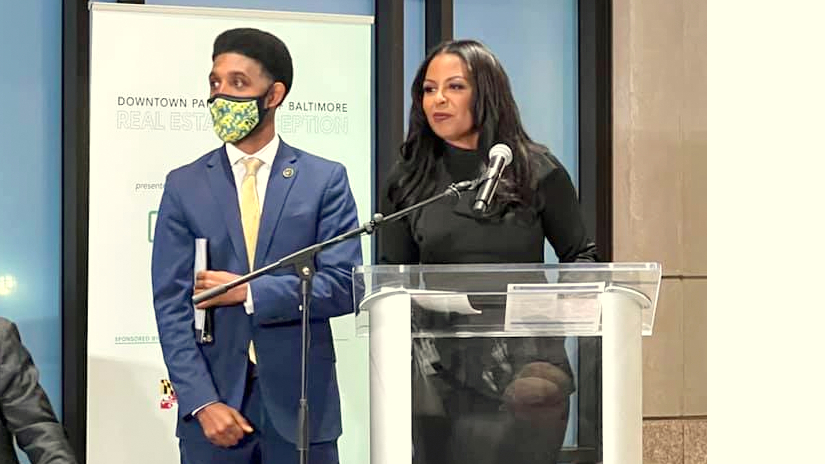 The DPOB website proclaims that “many people don’t realize it, but the Partnership is really two entities working together as one.” That is an understatement; there is virtually no daylight between the entities.

The DMA has a board of directors but no employees; what the DMA does, it does through DPOB and its employees.

In other words, the DMA is controlled by the folks who control DPOB. The DMA is little more than the legal framework by which DPOB gets most of its work done.

How can there be real oversight if the same people control both entities?

All things considered, the distinction between the public and “private” activities of DPOB is a tenuous one, especially when it comes to legal requirements for openness and transparency.

Do the advantages of the remarkable absence of an arms-length relationship between a public body and the private entity that acts as its agent outweigh the disadvantages?

That’s a question for another day. The situation certainly presents challenges in holding DPOB accountable for its corporate conduct, however. How can there be any real oversight if the same people control both entities?

Even if not forced by DMA to do so, DPOB should be careful to preserve the public’s confidence. That means scrupulously avoiding the appearance of conflicts of interest in all of its transactions.

It also means being as transparent as possible and not hiding behind legal arguments on the scope of the Maryland Public Information Act.

DPOB has made significant contributions over the years, and there is important work ahead in order to revive the central business district.

At the same time, Baltimore City can ill afford to have another governmental or quasi-governmental agency bogged down in controversy and mistrusted by residents.

• David A. Plymyer is a retired attorney for Anne Arundel County. He can be reached at dplymyer@comcast.net and Twitter @dplymyer.