For the second time in a week, a priest from the Baltimore area is drawing national criticism for incidents that took place in a local Catholic church.

“Our bodies are a temple of the Holy Spirit,” Meeks intoned during his homily, citing a biblical phrase from Corinthians.

“No earthly king or president or public health official or billionaire technocrat,” he went on to say, “gets to dictate what we must put into our bodies, into these temples of the Holy Spirit. . . that’s between us and God. You hear what I’m saying?”

Applause can then be heard in the video (“No Earthly King“) posted on Meeks’ YouTube channel, which has been viewed now more than 13,000 times.

But Meeks’ remarks drew widespread condemnation outside of his church, after a video clip of them was posted by political commentator Ron Filipowski, a former prosecutor from Florida.

Many pointed out that medical experts, public health officials and even the Vatican have advised people urgently to get vaccinated against Covid to prevent the spread of the virus that has caused more than five million deaths worldwide.

“So now the Catholic Church and the Bible are against vaccines?” the CNN commentator and former White House press secretary Joe Lockhart tweeted.

From Meeks: No Response

Meeks has not yet responded to a request from The Brew for comment.

A spokesman for the Archdiocese of Baltimore also had no comment, noting that Meeks’ church is under the authority of “the Ordinariate of the Chair of Saint Peter.”

The Ordinariate was established for those who wanted to flee what they saw as the liberal excesses of the Anglican Church, particularly those of the Episcopalians, and become Catholic, but still hold on to Anglican traditions. Meeks’ church switched from Anglican to Catholic in 2012.

The Houston-based Ordinariate also has not responded to a request for comment.

On that same day that Meeks was inveighing against vaccines from the pulpit, people wore rainbow-striped Covid masks at St. Francis of Assisi Chuch in northeast Baltimore to protest an incident that took place there on November 19.

A Catholic school student had been made to remove her gay pride shirt in front of her classmates and was told later by the principal that the rainbow-striped “PROUD 365” basketball jersey contradicted “the tenets” of the Catholic Church.

(Witnesses told The Brew that Father Jack Lombardi had directed school officials to tell the girl to remove her pride shirt. The Archdiocese later said that St. Francis of Assisi School officials, not Lombardi, were responsible.) 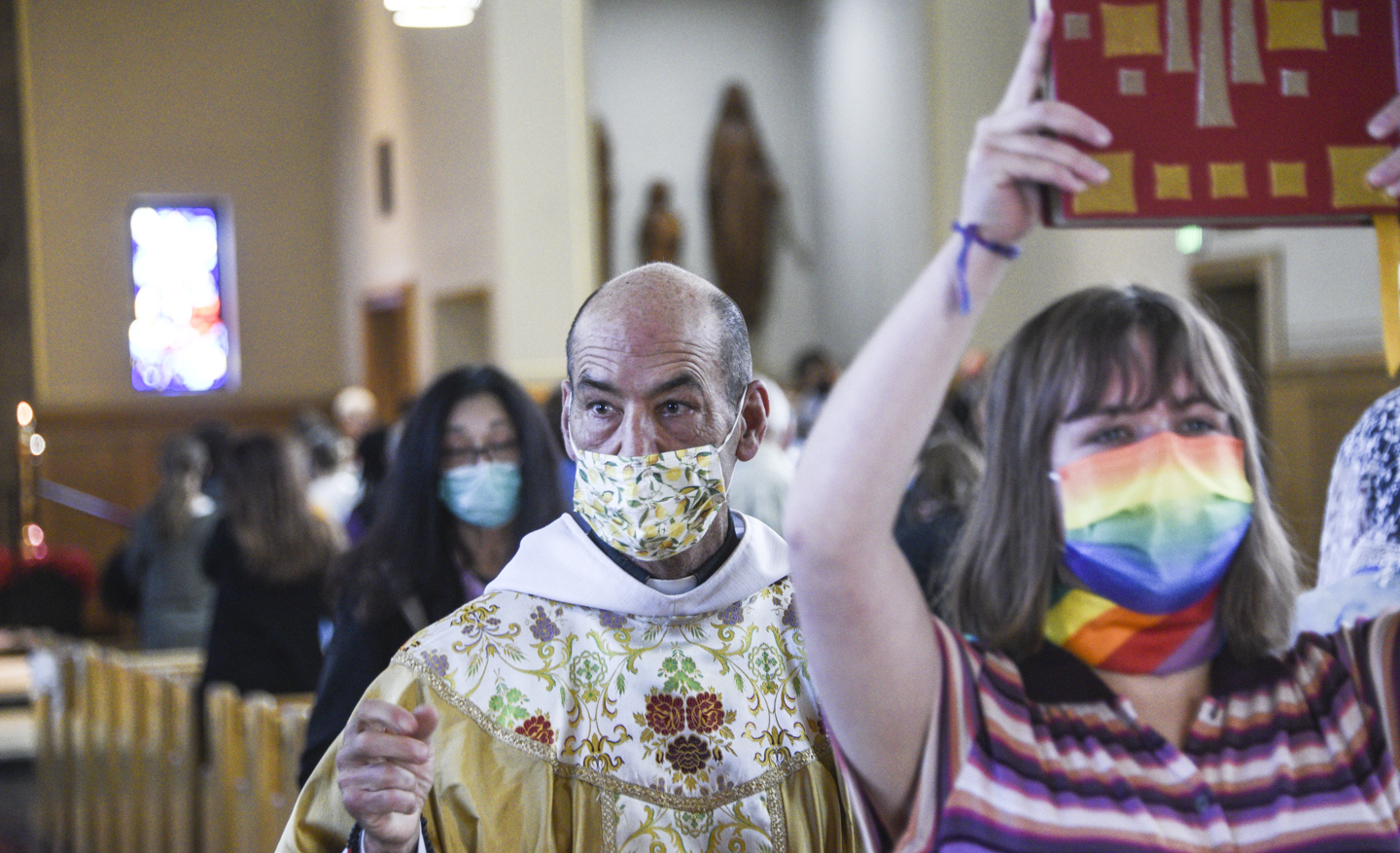 Father Jack Lombardi at St. Francis of Assisi Church, where some congregants protested treatment of a girl forbidden from wearing a Pride shirt. (J.M. Giordano)

The incident, first reported by The Brew, was subsequently covered by LGBTQ news outlets (Queerty and Advocate.com ) and drew the attention of a high-profile advocate for LGBTQ rights within the church, Fr. James Martin.

“Wearing a Pride shirt is not against any church teaching,” wrote Martin, a New York Times best-selling author, in remarks posted on his Facebook page.

“Church authorities have to be particularly attentive to the real-life effects of such stigmatizing words and gestures,” he wrote. “Not only on the mental health of LGBTQ youth, but also on their families and friends, as well as the community.”

The incident also made waves locally.

At mass this past Sunday, at St. Ignatius Church in Mt. Vernon, Father James A. Casciotti spoke of the incident, applauding the response of students and parents who protested what happened and and observing that messages of exclusion against LGBTQ people contradict church teachings.

“Gay people are in all of our families. Gay people are part of the family of the church. They belong at the family table,” he said. “We need to get over our obsession with sexual acts and place them in the broader context of love and fidelity and mutual support.”

When he concluded, the crowd applauded.

Fr. James A. Casciotti’s remarks about the St Francis of Assisi Church incident begin at 58:40. (YouTube)