Since 2014, and most likely for 20 years prior to that, the Baltimore Police Department has not adequately kept track of the guns, drugs, cash, vehicles and other property it seized, mostly in drug raids.

A state audit – so far not reported in the media – found that BPD could not account for thousands of firearms it was supposed to destroy, maintained loose controls over millions of dollars of cash, and failed to notify owners of their rights to reclaim seized property.

The report (11/30/21) by the Office of Legislative Audits examined how the Evidence Management Unit (EMU) safeguarded more than $11 million in cash, 14,000 weapons, 75,000 drugs and paraphernalia, and an unreported number of vehicles taken by police between July 2014 and June 2020.

Under state law, police can confiscate money, weapons, vehicles and other private property when there is probable cause that the property had been used or is intended to be used in violation of drug laws.

The police, though, are supposed to fill out a property seizure forms and give a copy to suspects or notify them within 15 days. The department then has 60 days to determine whether to seek forfeiture of the property, continue holding it as evidence or return it to its owner.

But what the law says and what Baltimore Police actually do are widely divergent, according to the first-of-a-kind audit of BPD’s management of confiscated property, one of several audits ordered under new Maryland legislation.

“Our audit disclosed that BPD’s written policies and procedures. . . did not address the performance of routine physical inventories” and “critical data relating to seized firearms were often not recorded or were inconsistently recorded,” wrote chief auditor, Gregory A. Hook, to the Joint Legislative Audit and Evaluation Committee.

In a sample of 47 seizures involving 20 private vehicles and $580,701 in cash, “BPD could provide a receipt form for only one of the seizures, which consisted of money totaling $6,460,” the report said.

In eight other cases, where BPD records indicated that confiscated property had been returned to its owners, only two signed receipts could be located.

BPD did not have effective procedures to ensure that items transferred out of its property room for court proceedings, laboratory tests or other matters were accounted for.

That amounted to 28,433 property items outstanding between December 1993 and September 2019, according to the department’s own records.

“BPD could not document that sufficient follow-up action was taken to investigate these outstanding items to determine the current disposition,” the audit reported, including “at least nine firearms” that were transferred “to other BPD units for further investigation.”

28,433 property items transferred out of the evidence room between 1993 and 2018 were not returned or accounted for.

Nor was data entered correctly for many firearms set to be destroyed.

In one test by auditors, 3,363 of 5,828 firearms (or 58%) scheduled for a “burn event” lacked witness approvals, and other supporting documents were not retained.

As a result, it could not be confirmed that the weapons were actually destroyed.

What’s more, BPD was not reporting the destroyed firearms to the Maryland State Police, as required by law.

“MSP management personnel advised us that they had not received any record of destroyed firearms from BPD since 2012,” the audit says. “Although we were advised by BPD officials that the reports were sent to MSP, there was no documentation provided by BPD.”

Over half of the firearms scheduled for destruction could not be verified.

Baltimore Police also could not document $1 million in overtime charged to the U.S. Department of Justice’s Equitable Sharing Program.

Overtime costs by city personnel who participate in federal law enforcement can be reimbursed, but the expenses should be adequately supported by documentation.

The audit said BPD did not maintain records showing “the specific employees and the hours worked to substantiate the proper use of program funds.” 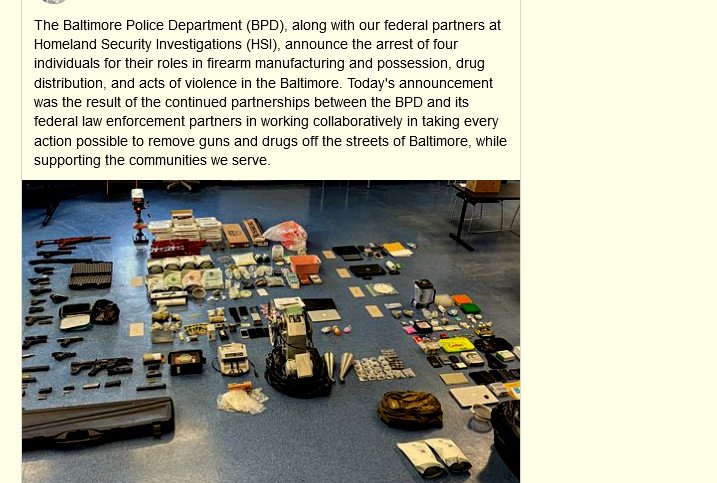 BPD blamed its shortcomings on “an antiquated evidence management system and a lack of necessary personnel to manually track the disposition process.”

The agency said it has used the same system since 1993, and the software had not been updated “in numerous years.” In June 2020, the Board of Estimates approved upgrades to the system, which went into effect in the third quarter of 2021.

While the just-upgraded system was not evaluated, the auditors emphasized that poorly trained personnel were at the root of many management problems.

Poorly trained personnel are at the root of BPD’s management failures.

Staff and supervisors failed to follow written policies and procedures, and many uniformed officers were not knowledgeable of the laws governing the disposition of seized property.

Newly promoted detectives and other investigators were not instructed on the necessity of authorizing the disposal or return of seized property in a timely manner.

“Training, if provided by BPD, could help address” many of these deficiencies, the report said, especially if the department adopted the best practices established by the International Association for Property and Evidence. 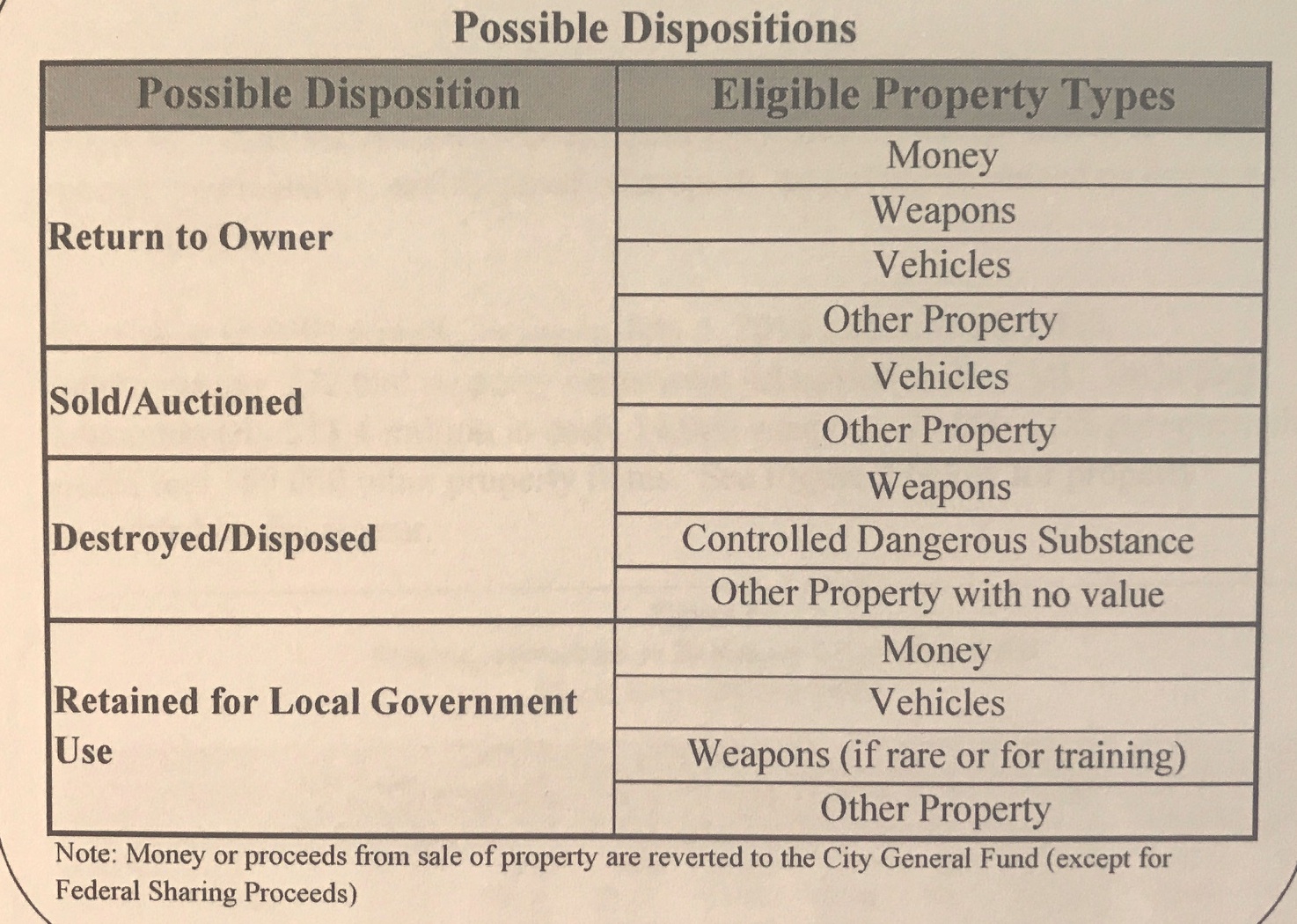 Depending on circumstances, property and money seized by police can be sold, retained or destroyed by a local municipality or returned to their owners. (Office of Legislative Audits)

In a response signed by Police Commissioner Michael Harrison, BPD accepted all eight of the audit’s deficiency findings and pledged to do better.

Specifically, the department said it would:

• Require EMU personnel to conduct “routine sample set” physical inventories and reconcile inventory discrepancies with industry best practices. But it also warned that “because of the resource-intensive nature of the recommendation, supplemental funding would be required for EMU to complete a comprehensive physical inventory.”

• Identify confiscated items that could be returned to owners by “employing a trackable EDO [Electronic Disposition Order] function which will significantly improve the efficiencies of the process.”

• Introduce a process whereby officers are contacted every evening “to provide an update on outstanding items taken out of the property room for court proceedings or further investigation.”

• Improve firearm documentation before “destruction events,” including “scanning and digitally storing information” for future reference. The agency added: “We recognize there was a discrepancy in timely reporting of destroyed firearms to the Maryland State Police. This task will now be handled by the EMU Legislative Compliance team.”

• Conduct a “thorough review” of its compliance with the Equitable Sharing Program, which allows the city to share forfeiture proceeds from joint federal-city drug and other raids.

The report was the outcome of a law, passed in 2020 by the General Assembly, that requires the Office of Legislative Audits to evaluate the “effectiveness and efficiency of the financial management” of Baltimore Police.

This was the second of four planned reports. The first, published in October, evaluated the department’s purchasing and disbursement controls.

Still to come are audits of police surveillance equipment and police overtime, both sources of perennial controversy in Baltimore.