For Curtis Bay residents like Janet Clark, today’s thunderous explosion at the CSX Coal Terminal was terrifying – and only the latest reason to fear and resent the gritty landmark.

For years, the soot and smells emanating from the terminal’s activities at 1910 Benhill Avenue have left them wondering just what harmful substances they inhale on a daily basis.

“You wipe things down, and an hour later that black soot’s all over them again,” said Clark, who lives about 200 yards from the coal pier.

“We had a blow-up kids pool out back, and every morning it was black again, with the black stuff lapping in the water.”

Today, a late morning explosion at the facility had residents diving for the floor and watching in amazement as smoke billowed into the sky. So far, there have been no reported injuries.

After witnessing the incident while walking with her fiance, Clark’s daughter came home with soot-streaked hair.

“We’re wondering if this is hard on our health. We’re very worried about it,” said Clark, who has lived on Church Street for the past seven years.

“We had a kids pool out back, and every morning it was black again”  – Janet Clark, Curtis Bay.

Community leaders say they have been trying, without success, to get state and local officials to do something about the facility and others in their industrial waterfront community.

“We’ve been ringing the bell on this for a long time now,” said Ray Conaway, secretary of the Community of Curtis Bay Association. “Maybe now, with this catastrophic event, people will pay attention.”

Conaway said today’s loud “boom” and vibration at about 11:30 a.m. “was so loud I thought a plane had crashed.”

People in the neighborhood were online saying the same things that others were saying from many miles away:

One of the first to offer an explanation was City Councilman Eric Costello, who said on Twitter that the sound was caused by “a propane tank explosion at the CSX Coal Pier in Curtis Bay.”

His statement that no injuries had been reported was reassuring. But Costello soon was drawing criticism with his comment that “the explosion is isolated to the CSX property, no impact or risk to community.”

“Lots of blown-out windows at nearby residences,” Kevin Kacin responded. “That seems like an impact and risk to the community.” Others pointed to the air pollution that residents were potentially suffering from due to the clouds of black smoke.

Residents posted photos of shattered window glass on the sidewalk. Conaway said one of the windows at his house was knocked out of the frame.

Greg Sawtell, who works in Curtis Bay, said there were multiple buildings with cracked and damaged windows. Janet Clark said one neighbor told her a ceiling fan had been knocked loose by the blast. 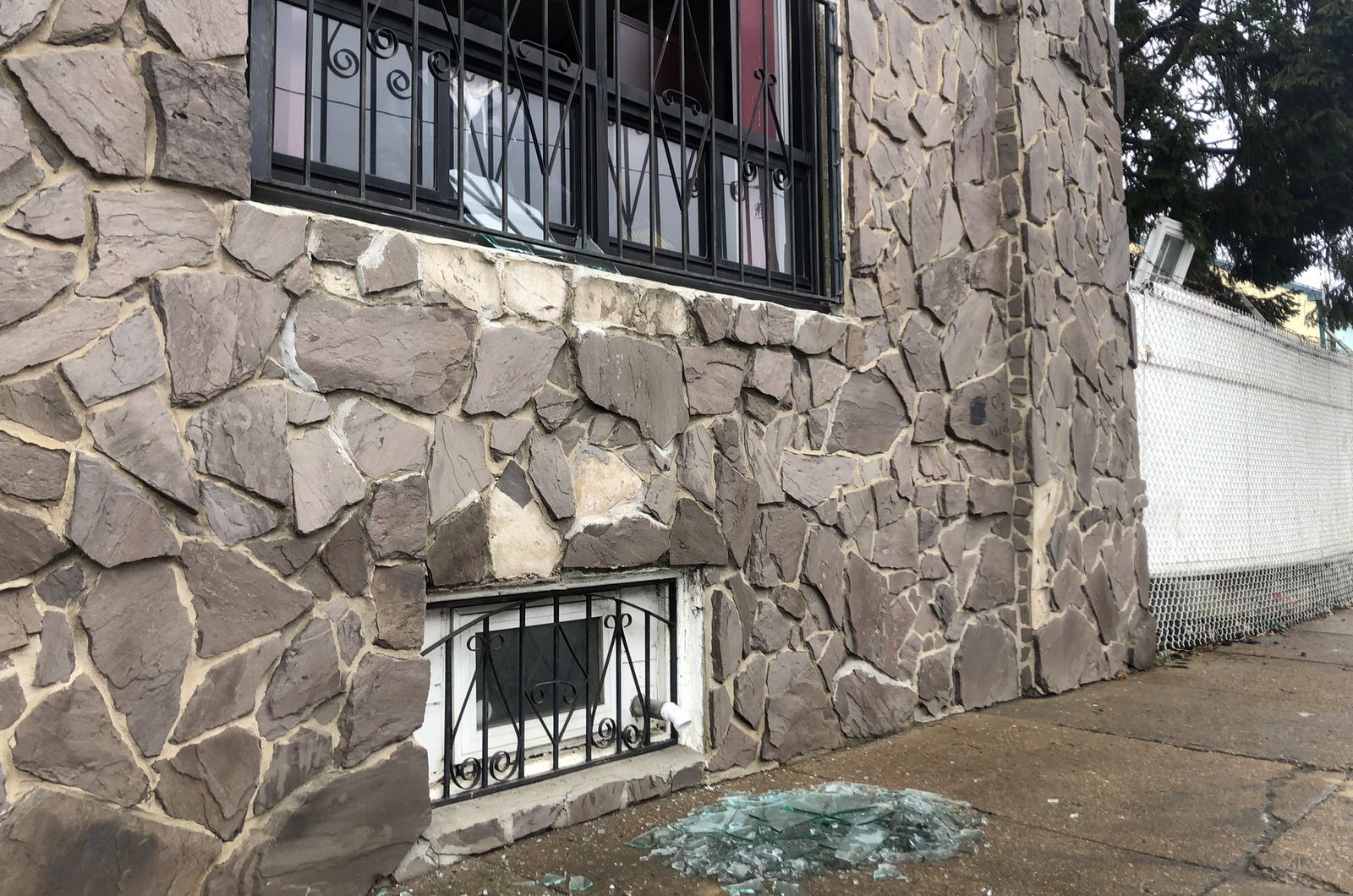 After the coal terminal explosion, shattered glass on the sidewalk in the 1600 block of Filbert Street. (Greg Sawtell)

As for the cause of the explosion, officials from CSX and the Baltimore Fire Department say it is still under investigation.

There was heavy damage to the silo where coal shipped mostly from West Virginia mines is stored and then transferred to ships, according to a CSX website.

In recent years, $6o million in terminal upgrades were made so that “a large percentage of coal can go directly from the rail car to an oceangoing vessel or coastal barge, eliminating the need to store coal on the ground for any significant length of time,” CSX says.

But photos today showed large piles of coal still on the ground.

Asked if the explosion emitted dangerous fumes or particulates into the neighborhood, a spokesman for the Maryland Department of the Environment (MDE) indicated that the state was leaving it to the railroad to monitor the situation.

“Our air team is in communication with CSX and is requesting a written report on the incident,” MDE’s Communications Director Mark Shaffer said in an email.

Shaffer said the agency’s emergency responders were on the scene “in support of the Baltimore City Fire Department.”

How about the facility’s past compliance with state and federal environmental regulations? He said he would check on CSX’s air quality permits and the site’s enforcement history.

(Shaffer emailed later to say: “CSX has an operating permit that covers all of its coal handling equipment and there have been no violations in recent years.”)

The address listed for the facility has no outstanding building code notices or citations from the city Department of Housing and Community Development.

The last building permit was issued last year for the “emergency replacement” of an escape tunnel on the south side of the structure. 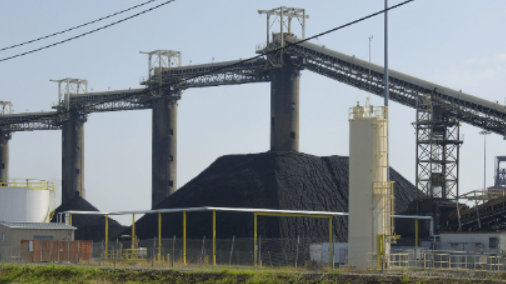 Conaway, whose family has lived in Curtis Bay since 1999, said the community has been suffering for years from the unhealthy effects of heavy industry.

In addition to the coal terminal, the area is home to a medical waste incinerator, a rendering plant, various chemical factories, a sewage treatment plant and the city’s sprawling Quarantine Road Landfill.

Residents have pushed back over the years, protesting that the low income and Black neighborhoods were being saddled with too many health-harming facilities and industries.

They repelled Energy Answers’ efforts to site a new trash incinerator in Curtis Bay and were a hub of resistance to the renewal of the city’s contract to send its trash to the nearby BRESCO incinerator, Baltimore’s current biggest source of industrial pollution.

More than a decade ago, Rodette Jones and other residents created the Filbert Street Garden, a popular community garden and gathering place. Then in 2019, they had to fight to prevent the city-owned plot from being turned into a Department of Public Works pumping station.

“Environmental justice has been a problem here for many years,” Conaway noted today. “And this community has been very dedicated to working on it.”

• Mark Reutter contributed to this story. 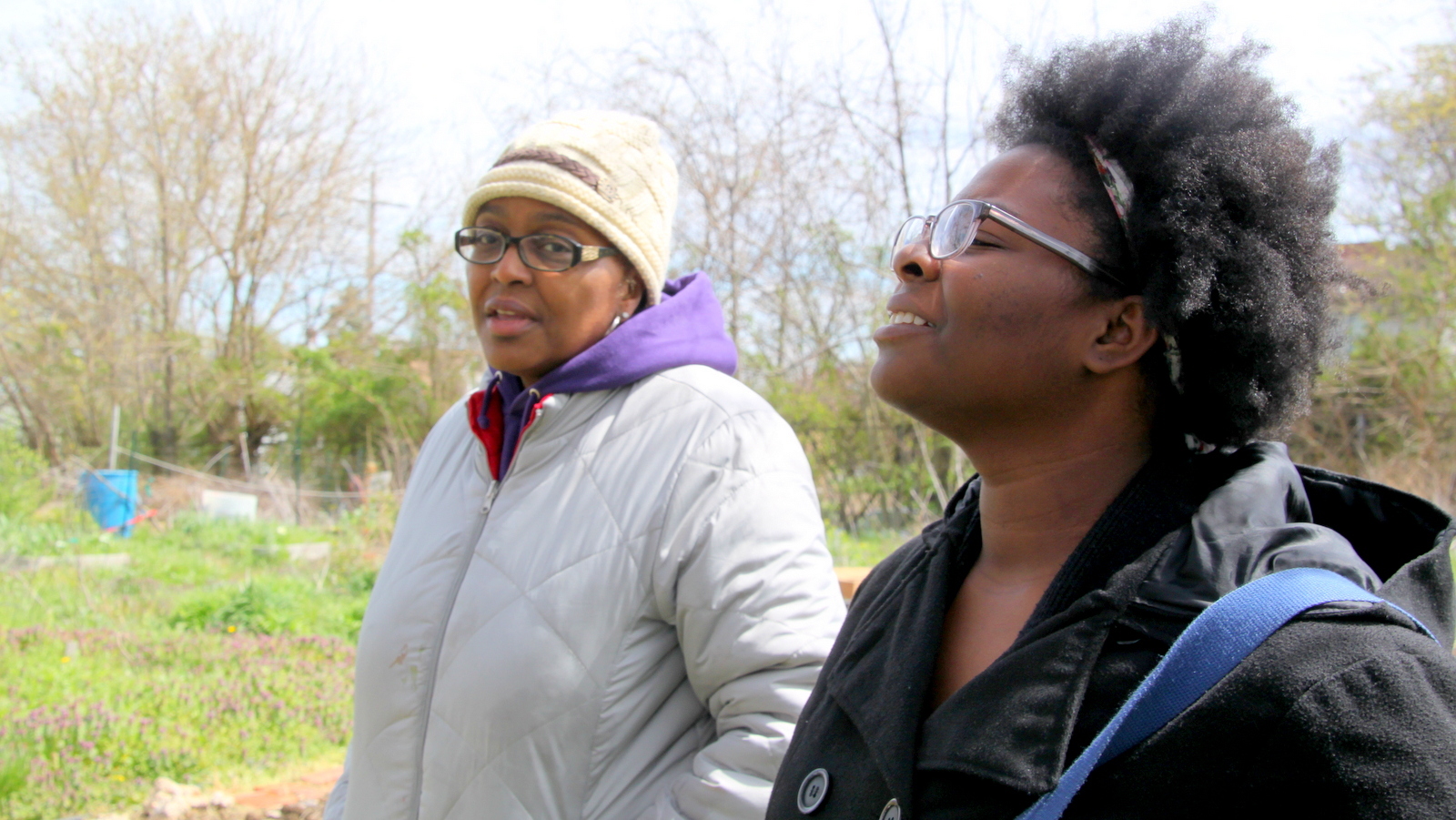 Rodette Jones and Destiny Watford in the Filbert Street Garden in 2016 after state regulators declared Energy Answers’ permit to build an incinerator had expired. (Fern Shen)