Criticized by teachers, parents and some city lawmakers over their plan to resume in-person learning amid a record-setting Covid-19 surge, Baltimore school officials announced today they are pushing back the return date by one day, to January 6.

But their basic message was: they are not changing their stance.

“It is no exaggeration to state that we believe our schools will continue to be some of the safest places for children,” City Schools CEO Sonja Santelises said.

Speaking at this morning’s virtual press conference was a phalanx of state lawmakers assembled to back her up.

At the start of the pandemic “we never could have estimated the impact – socioeconomically and emotionally – that these closures would have on our children,” Senate President Bill Ferguson began, saying the picture has changed since March 2020.

“Two years ago we did not have vaccines,” he said. “We didn’t have rapid and pool testing to detect asymptomatic cases. And we didn’t have newly improved treatments that drastically cut the severity of the illness.”

The unusual joint appearance of Annapolis pols and North Avenue administrators came as the school community was caught up in a swirl of anxiety over the prospect of children returning to classrooms.

Leading up to the winter break, as the Omicron variant surged, outbreaks were flaring in schools across the city and hospital emergency rooms were reporting a tsunami of admissions.

With case rates rising to record levels and Covid tests in the community difficult to find, calls have been intensifying for City Schools to delay in-person re-opening, move to mandatory testing and stave off even more widespread outbreaks and staffing shortages.

Speakers today had a response: schools must reopen to prevent the physical, emotional and educational harm that learning from home has inflicted on “black and brown children,” as Del. Stephanie Smith put it.

“I see the test scores come in,” Del. Maggie McIntosh said. “For many of our students, this is their safe environment, the schools.”

Sen. Antonio Hayes said he was aware of “egregious examples of abuse and neglect because our young people have not been in touch with educators.”

But while Smith and others framed the return to school buildings a matter of “equity,” city schools teacher Jocelyn Providence said she was offended by the remarks made during the press conference – calling them “condescending and classist.”

“Baltimore families were constantly referred to as abusive, negligent and ignorant to their children’s needs and that only being inside of a school building can address their needs,” Providence said afterwards to The Brew.

The teacher questioned why school officials and their advocates made a point of saying schools “are the only place that students can have loving people around them,” while refusing to acknowledge that school buildings could also endanger them.

“The lack of financial and time investment into social and emotional learning and mental health shows that they are not being true about their reasoning,” Providence said.

School officials  announced some changes today. All staff will be required to participate in Covid-19 testing throughout the month of January “regardless of their vaccination status.”

Testing had previously been voluntary.

Students will be offered testing on Wednesday, one day before they are scheduled to return, Santelises said.

After previously learning remotely, city students have been back in the buildings, participating in weekly pool testing. But now, when there is a positive result, the students will be given rapid tests “to quickly identify” which of them is positive. Those who test positive will be sent home.

A Covid-19 response division is to be in place by the end of the month, reporters were also told.

Today’s announcement made it clear that Baltimore would not be following the lead of other large school systems that have switched to remote learning because of Covid-19 outbreaks and staffing shortages.

(While New York City schools are staying open, Milwaukee, Madison and Ann Arbor are going remote until January 10, the New York Times reports. Newark’s schools will be out until January 18.)

Also clear today was North Avenue’s rejection of the position taken by the Baltimore Teachers Union and the Parent and Community Advisory Board that only staff and students who have received negative tests return to in-person programming.

The BTU had asked for five additional days of virtual learning after the winter break, with a contingent return to in-person learning on January 10, when every student and staffer would receive a rapid and a PCR test.

“Individuals who test positive should not be permitted to stay in school,” BTU president Diamonté Brown said in her December 22 letter to City Schools.

(A separate petition by students, with nearly 1,500 signatures, calls for a two-week delay in in-person classes following the winter break.)

“All groups have the same clear demand – everyone having to submit a negative test before returning in-person,” Providence said. “They continue to say ‘no’ to all of us and use their Covid dashboard data that is inaccurate and misleading as ‘evidence.’”

The testing program, critics say, is fundamentally broken in implementation, though it is strong in theory and praised by some as a national model.

Contact tracing, for instance, has been taking 10 or more days, “which eliminates the entire point of contact tracing,” one teacher told The Brew today.

“If you cared about the kids”

Absent from today’s event were any City Council representatives, several of whom have publicly called on the school system to only allow teachers and students to return if they test negative.

“I don’t really understand how anything less can really be justified,” Councilman Ryan Dorsey observed.

“As a father and former teacher, I worry that opening too early could cause increased spread and suffering,” tweeted Councilman Cohen.

Del. Marlon Amprey, representing District 40, also tweeted his concern about a return to in-person, “given current positivity and hospitalization rates.”

Cohen found himself assailed by experts from Johns Hopkins who have been advising City Schools on its handling of the pandemic and went online to defend North Avenue. 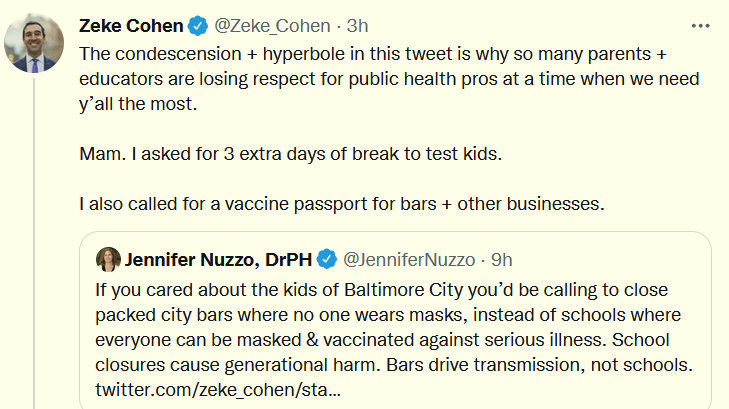 “If you cared about the kids of Baltimore City, you’d be calling to close packed city bars, where no one wears masks, instead of schools where everyone can be masked,” tweeted Jennifer,  Nuzzo, senior fellow at the Johns Hopkins Center for Health Security.

“Everyone masked? With what? Cloth masks worn under their noses? Air purifiers with dirty filters?” @mpnewhouse replied. “Half of the kids unvaccinated and opting out of testing?”

Criticism of Cohen by another expert from the Johns Hopkins Center for Health Security, senior associate Gigi Gronvall, drew even more withering responses. 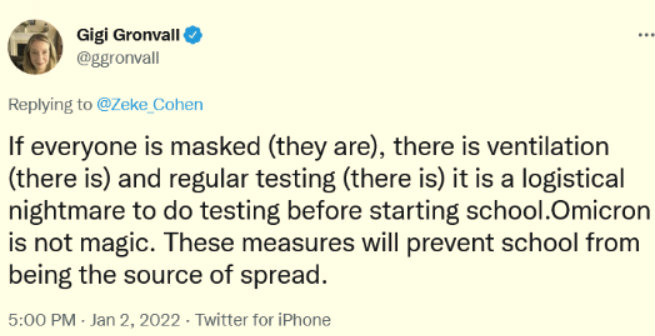 Gronvall, who sits on City Schools Health Advisory Committee, got a tidal wave of replies from parents and teachers saying she was wrong – that masking, ventilation and testing at Baltimore city schools are iffy at best. 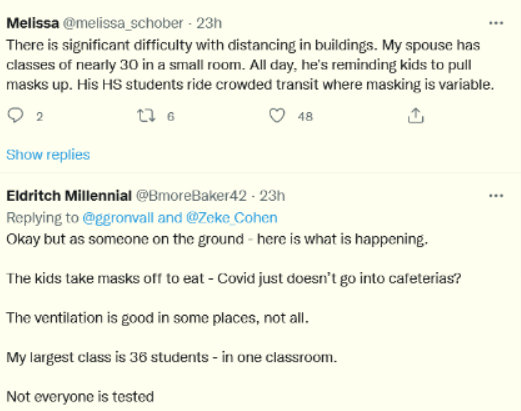 “There are holes in the net,” a history teacher replied.”The week prior to break we had at least two staff members and dozens of positive tests, none of them were reflected in the official dashboard.”

He said that the week before break “during Omicron ascendency was downright terrifying positive tests left and right – kids in the same classes, close contacts, there was no way that contact tracing was happening effectively.”

Many commenters had the same advice @crownejoules offered to Gronvall and Nuzzo:

“Shadow an elementary school student at a different BCPSS school each day for five days. Not any of the fancy~ schools, one of the older ones. See how kids wear and don’t wear their masks, how adults take them off to yell louder, how windows stay closed. Learn.”