Club owners in Baltimore’s adult entertainment zone say the current crackdown on The Block is nothing more than a land grab by developers – and lawmakers who are in their pocket.

Not true, says Maryland Senate President Bill Ferguson, who has sponsored a bill to close the raunchy row of bars and strip joints at 10 p.m.

He says the bill’s only purpose is to curb illegal activity in a crime hot spot that has sucked up more than its share of scarce police resources.

“This is about the price of real estate,” says Sachs, an owner of Club Chez Joey, pointing to past attempts to close the bars and move them to other parts of the city.

“The city was offering pennies on the dollar. Like 40 cents on the dollar,” he said, going on to point the finger at Ferguson and Delegate Brooke Lierman, who also represents the 46th legislative district where The Block is located.

“Big contributions” to Ferguson and Lierman by real estate developers are driving their actions, Sachs charged, while the interests of smaller downtown businesses, like those on The Block, are ignored.

The two sides have been dueling over crime statistics, with Block owners holding a news conference in Little Italy today to present data they say shows crime there is being exaggerated.

And now a gubernatorial candidate is stepping into the conversy.

Former Prince George’s County Executive Rushern Baker is on his way to Little Italy as well, decrying “backroom deals and scapegoating small businesses” in a press release this morning.

“We’ve seen this ploy before,” Sachs said in an interview. “I think Bill Ferguson and Brooke  Lierman thought we were easy targets.”

The Brew took a look at his claim about developer dollars, examining the latest campaign reports (covering 2021 and the first two weeks of 2022) for Ferguson and for Lierman, who is running for Maryland comptroller in the June primary.

Lierman has amassed a $1.8 million war chest as she seeks statewide office for the first time. A review traced more than $100,500 to major Baltimore-area developers and restaurateurs.

Also among Lierman’s contributions was $6,000, the maximum allowed from an individual, from Alex Smith, president of the Atlas Restaurant Group, which owns restaurants in Harbor East, Fells Point and Federal Hill. His brother, Eric Smith, managing partner of Atlas, gave $1,000.

A review of recent contributions reported by Ferguson identified more than $77,000 from developers and related entities and businesses.

He received $5,000 from developer Scott Plank and $3,500 from people and entities associated with Caves Valley Partners.

Ferguson also accepted $10,000 from members of the Paterakis family, whose H&S Properties Inc. developed Harbor East. Another $6,000 came from Promenade Venture, affiliated with Atlas Restaurant Group’s Smith, who is a grandson of the late developer and bakery magnate John Paterakis Sr.

While the contributions are sizeable, campaign dollars from developers and other business entities eying project across the region have consistently been a major source of revenue for Maryland politicians.

Asked about Sachs’ charge, Ferguson responded that financial support from developers “obviously” has no connection to his and Lierman’s efforts to crack down on crime on The Block.

“We live in an era of conspiracy theories. What they’re saying couldn’t be further from the case,” Ferguson told The Brew. “The only purpose of this is to reduce violence and to address the disproportionate use of public resources for a private operation.”

Lierman scoffed at the idea the bill is intended to free up scarce real estate in Baltimore’s struggling downtown.

“There are so many vacants, so many empty lots that have been that way for years,” she said.

Lierman, singled out by the owners even though she is not a lead sponsor of the bill, added “I have never been contacted by any developer with interests in The Block.”

Submitted as emergency legislation, Ferguson’s bill would take effect immediately upon passage. It would impact a liquor store, a bar and about a dozen licensed adult entertainment clubs located in the 400 block of East Baltimore Street.

Asked in a recent WBAL radio interview who initiated the bill, Police Commissioner Michael Harrison said, “It’s a proposal that comes from legislators, but it’s one that I supported.”

Ferguson said The Block is “an environment of concentrated crime that has worsened over the last year,” sparking calls for service that disproportionately take up the time of Central District police officers.

Representatives of a hotel, Staybridge Suites, and a condominium building, 414 Water Street, told a meeting of city senators about “some really intense problems” they had with patrons from The Block, according to Ferguson.

(Maryland lawmakers and the Liquor Board, not city officials, determine liquor policy and store hours in Baltimore.)

Critics question why such extreme measures are needed to control lawlessness – literally across the street from their headquarters building – and why the focus wasn’t on other entertainment areas like Canton and Fells Point.

Ferguson responded by tweeting graphics (see the one below) that purport to show those neighborhoods had magnitudes less crime than The Block.

His tweets prompted skepticism about his data sources, mockery about the calculations and denunciations of the graphics as racist. 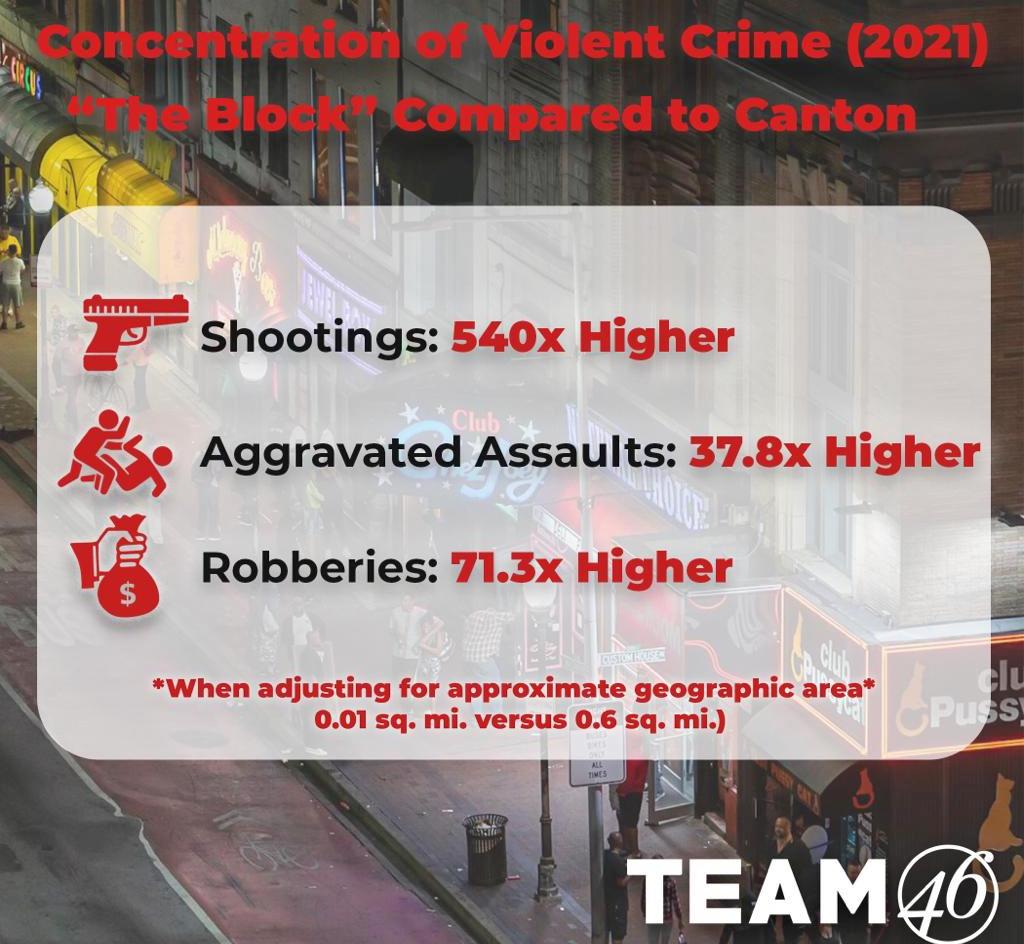 “If this is about giving developers an opportunity to seize this parcel of prime real estate, they should be up front about it. I just feel strongly about that,” said Vignarajah, who told The Brew he is not being paid for his services or acting as the group’s attorney.

News reports about the bill on the local Fox affiliate were particularly harsh, portraying the club owners as aggrieved small business owners and employers.

“Some people [are] calling it a stupid bill,” a Fox45 reporter said at the top of one segment before commencing an interview with Ferguson in Annapolis.

Was he trying to get the station to back off?

Ferguson acknowledged he had invited Smith to sit down with him.

“We are facing serious challenges in the city. I am open to talking to everyone,” he said. “I wanted to understand why there was not a different approach taken to the coverage.”

Was there any agreement reached by the end of the dinner?

As for the legislation, the next step would be a committee hearing in Annapolis, but no date for one has been set.

Both sides have accused the other of not reaching out to discuss concerns about policing the area. Perhaps they will have another sit down?

“There have been conversations. I’m always open to conversations. At the end of the day, my only interest is to find a way to have a safe city,” Ferguson said. “The legislative process is built for compromise.”