Baltimore activists and lawmakers who helped lead the push last year for sweeping statewide police reform are grappling this year with a harsh irony:

As part of that package, the 2021 Maryland General Assembly passed HB670, which required jurisdictions to set up Police Accountability Boards (PABs) as the first place citizens would bring misconduct complaints in a revamped system.

But after compromises watered down the bill, the structure of the new PABs ended up weaker overall than the Civilian Review Board (CRB) already in place in Baltimore.

“If we don’t get this right, we’re going to be going backwards,” Sergio España, director of engagement and mobilization for the ACLU of Maryland, points out.

The new PABs will not be able to issue subpoenas and lack investigatory power. When a complaint comes in, they must refer it to the police agency’s internal affairs division for investigation and the agency then forwards the matter to an “administrative charging committee.”

By contrast, Baltimore’s CRB, created by the state legislature in 1999, may subpoena witnesses and conduct its own probe of reported misconduct. The board, composed of mayoral appointees, then makes a finding and can recommend discipline, the Commissioner still has the last word. 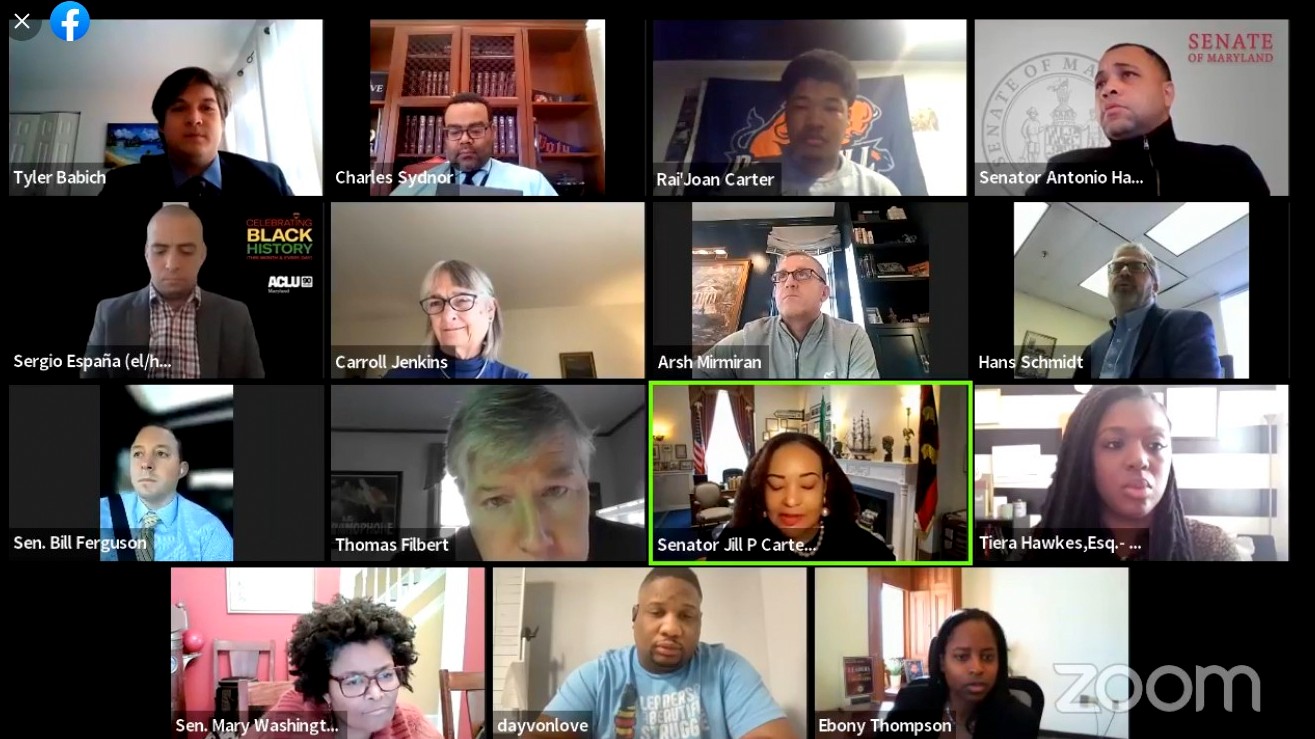 What España refers to as “a clean-up bill” is up for a committee hearing in Annapolis today.

Under SB441, introduced by Senator Jill Carter and supported by the ACLU and other civil rights groups, the CRB would absorb the responsibilities and duties assigned to the PABs under the structure created last year, while retaining its full investigatory powers.

Carter’s measure is also an attempt to save the embattled CRB.

Mayor Brandon Scott – citing the redundancy of the two entities and looking ahead to July 1 when the PABs must be in place  – is poised to phase Baltimore’s CRB out.

Speaking for the Scott administration, director of government relations Natasha Mehu said the CRB could eventually be “abrogated,” but sought to allay concerns.

“We all want to work toward improving what the CRB has started and ensuring that there is civilian oversight and really taking that to the next level, but we do have fundamental disagreements about how that should proceed,” Mehu said at a hearing on the bill before city senators last week.

Speaking in opposition to SB441, Mehu said that the bill “takes away that local authority from Baltimore City.”

“It puts us in a different posture than the rest of the jurisdictions and does so before we’ve even had a chance to set up 670,” she continued, arguing that retaining the CRB contradicts the city’s efforts to win local control of the police.

“It seeks complete independence from the city, but also mandates we pay their budget,” she said. (The bill specifies that the city must fund the budget at a level at least 2% of the BPD’s budget.)

Carter pushed back forcefully, telling Mehu that she and other administration officials “are incorrect when you say this takes away any power from the city.”

She pointed out that CRB members would continue to be appointed by the mayor and confirmed by the City Council and noted that her bill specifies the CRB would operate in accordance with public local laws.

True, Mehu said, “but this bill just says we have to do it the way you’re telling us to do it. . . rather than granting the authority that the other county executive have to establish a PAB.”

The two remained at odds.

“I actually think that’s a good thing because we already have a framework from which to work which other entities do not,” Carter said.

In addition to protecting the CRB’s current powers, its supporters are hoping it can become more effective as the new accountability process evolves.

The PABs created under HB670 are able to consider complaints about any kind of police misconduct. The CRB, meanwhile, may only consider complaints in five categories: abusive language, false arrest, false imprisonment, harassment or excessive force. Carter’s bill spells out that the CRB would not have those limitations.

The recent scathing report on the Baltimore Police Department on the corruption and misconduct leading up to the Gun Trace Task Force scandal “shows that most officers who were involved in high-level offenses first started by normalizing and not getting disciplined for low-level, though significant, offenses,” España said, addressing the senators.

These cases illustrate “the inherent conflict of interest” created by the city law office representing both the police department and the CRB  – Sen. Jill Carter.

Police reform advocates and members of the CRB have long complained that it lacks the independence and power necessary to address misconduct.

“The CRB has been ridiculed over the years for our limited power and jurisdiction,” CRB chair Tiera Hawkes said at the Senate delegation hearing.

Although the board is independent, its staff, including investigators, is housed within the city Office of Equity and Civil Rights.

In 2020, a frustrated board member who resigned said staffers in the office, at the direction of the city law department, were “prohibiting CRB members from adjudicating — or even seeing ― investigations until a BPD report was received.”

In 2018, City Solicitor Andre Davis directed the police department to withhold internal affairs files from board members unless they signed confidentiality agreements.

These cases illustrate “the inherent conflict of interest” created by having the city law office represent both the police department and the CRB, Carter said to deputy city solicitor Ebony Thompson. “Are you aware of that?”

“I do see that there was definite issues, which was why there was sweeping legislation last year to address those issues. That’s what we are attempting to do, but we have to do those [things] legally,” Thompson said.

Fear of  a “downgrade”

To Hawkes, the crux of the conflict is not legal procedure, but issues of power and trust.

“The city is, like, ‘oh, we’re going to create something new and fresh down the road, don’t worry we’re on the same team,’” she said. “But they’re not facing up to the fact that it’s really going to be a downgrade.”

Hawkes said the stakes are high for a city with a decades-old problem of police misconduct and corruption, little public trust in law enforcement and record-breaking levels of violence.

“The question is whether people will have an opportunity to report real things happening to them from the police – things that shouldn’t happen,” Hawkes said.