Last March, The Brew wrote about a Baltimore bridge project that was already 26% over budget – even though construction hadn’t begun.

A year later, the Colgate Creek replacement bridge on Broening Highway still hasn’t started, but the pricetag has jumped to 33% over budget and the completion date is now delayed until spring 2024.

After hearing from city transportation officials, the Board of Estimates yesterday approved a $1,022,844 EWO (Extra Work Order) to bridge contractor Allan Meyers, whose original low bid (of $17.7 million) and original completion date (of December 2020) are now a distant memory.

Comptroller Bill Henry queried DOT officials about some of the expenses. Mayor Brandon Scott and Council President Nick Mosby (whose campaign committee recently received a $500 contribution from a Meyers executive) were silent. 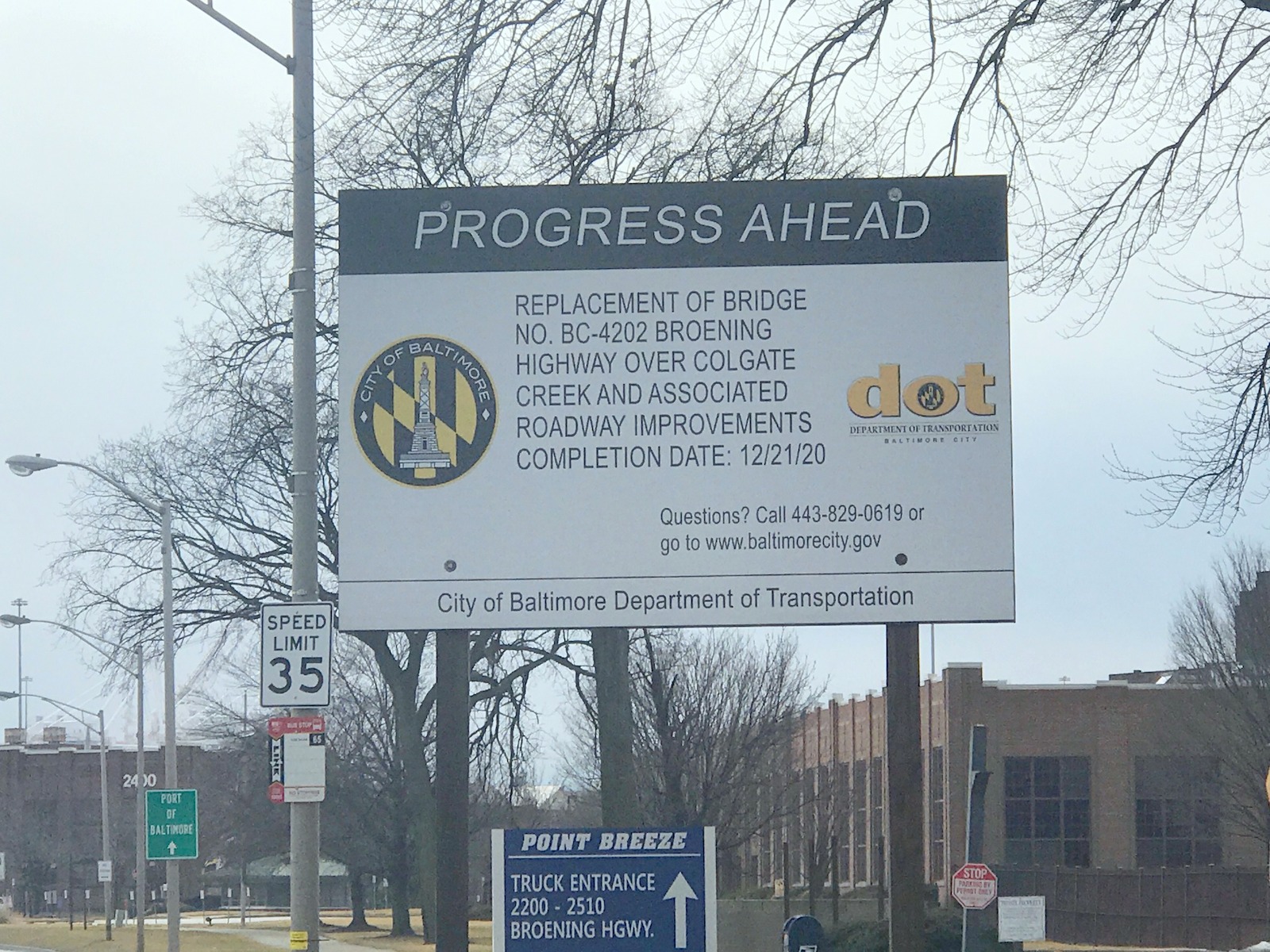 DOT sign proclaims that a bridge whose construction hasn’t started was completed on December 21, 2020. (Mark Reutter)

What happened at Colgate Creek dates back seven years to 2015, when the current bridge over the southeast Baltimore waterway fell below the federal standard for “bridge sufficiency.”

A study group declared a new bridge the “most critical infrastructure need” for the Seagirt and Dundalk marine terminals, which are dependent on truck transport because height limitations at CSX’s Howard Street tunnel restrict rail service to and from the port.

Failure to build a bridge that can safely handle heavy and oversized trucks will hurt Baltimore’s competitiveness in world markets, the group’s final report said.

Seeking to snag a federal TIGER grant, city officials rushed out specifications for the new bridge, only to find that the specifications were at odds with environmental permits governing Colgate Creek and a former factory, now a hazardous waste site, adjacent to the bridge.

Reaching an agreement on those changes took two years to complete, according to records reviewed by The Brew. It took another nine months for the project to win city, state and federal approvals.

Nearly all of the overrun costs will be borne by city taxpayers, diminishing the original allure of federal aid.

The changes required elaborate trestlework to be built under the current bridge before replacement work could even start.

The trestlework and related delays have added $5.8 million to the price, with about $1 million more expected, Sharkey acknowledged under questioning by Henry.

And except for a single $38,000 federal reimbursement, the bill for all of these overruns will be footed by city taxpayers, diminishing by millions of dollars the original allure of federal aid.

The delayed construction also means that St. Helena, Graceland Park and other southeast communities will have to endure port-related truck traffic rumbling through their streets for another two years.

With about 75% of the trestlework completed, the board authorized a 706-day completion extension on top of a previous 530-day extension.

Communities will have to endure truck traffic running from the port through their streets for another two years.

That fits into a longstanding pattern of over-budget and behind-schedule city bridge projects.

The Edmondson Avenue replacement bridge, started in November 2016, took five-and-a-half years to finish and is $3 million over budget.

Tomorrow (Friday) afternoon, Mayor Scott, Council President Mosby, and other politicians and community members will “celebrate its completion” in a live-streamed event.

The Harford Road replacement bridge is still underway and already costing 30% more than its bid price.

Meanwhile, reconstruction of three aging bridges over the Jones Falls Expressway – at Howard Street, 41st Street and Orleans Street – has been pushed back to the mid- and late-2020s due to lack of funding.

As Sharkey told the board yesterday, “They [bridges] take a long time here.”

Trucks to and from the Seagirt and Dundalk marine terminals use southeast Baltimore streets to bypass the Colgate Creek bridge. (Mark Reutter)