E. coli bacteria contamination has been found in the water in several West Baltimore locations, the Department of Public Works said in a tweet posted this morning at 7:43 a.m.

The Twitter thread said that DPW “is flushing the system continuously and performing leak detection, valve assessments and increasing the chlorination in the area.”

The agency said that the city Office of Emergency Management and Maryland Department of the Environment (MDE), as well as fire and police, “have been notified, provided representatives and are engaged with DPW.”

“As an extra precaution,” the thread continued, “DPW will be sampling and surveying the communities in the area of the facilities where the original sampling was performed.”

While the reported impact appears at present to be limited to the city facilities, residents are being told to use water for flushing only, the agency said.

A person who answered the phone at Engine 8 this morning confirmed that the facility was experiencing water problems but referred a reporter to BCFD Communications.

Spokeswoman Blair Adams said she did not have any additional information beyond what DPW is saying.

DPW representatives have not yet responded to a request from The Brew as to when the contamination was reported and whether area water users may safely drink their tap water while the matter is being investigated.

Councilman John Bullock, who represents the 9th District, said he was still getting information about the contamination today.

He said he heard about the issue yesterday.

“I got notified last night that they were doing some sampling and testing of the system there,” he told The Brew.

The union for city Fire Department employees was also informed of the issue yesterday.

“I found out about midday,” said Richard Langford, president of Baltimore Firefighters Local 734.

Langford said he was notified of possible contamination of the water at Engine 8, which has 11 members, and told bottled water was being distributed to members.

He said he was told the bacterial contamination affected water users “in the general area.”

DPW will be in the area distributing water as needed today. 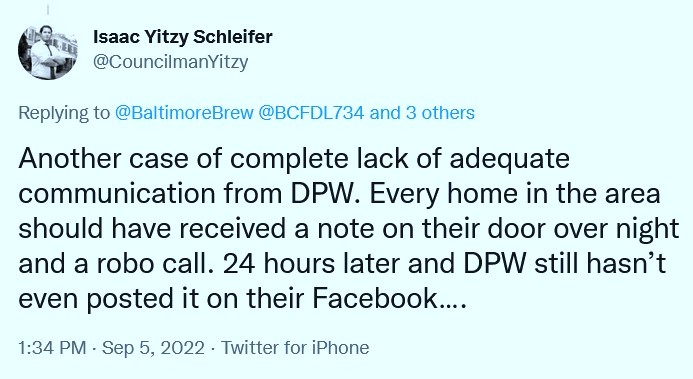 A statement from Mayor Brandon Scott, emailed to The Brew at 3:08 p.m., said the contamination “is limited to a specific area and not citywide” but did not describe in further detail what that area is, what might have caused the contamination or why information has been so scarce on an incident officials knew about yesterday:

“Mayor Scott is receiving continuous updates and has directed DPW to do the necessary work to expeditiously resolve the matter.

“Understanding that safe water is not something that is just nice to have, but rather a necessity for us all, we know DPW is committed to working with local and state agencies to ensure that the situation is addressed in a timely fashion.

“Although this is limited to a specific area and thankfully not citywide, we are absolutely taking this matter very seriously and understand the concerns of all residents at this time, especially when communities in cities in other parts of our country have recently had water challenges.

“We want to encourage people to look out for updates, which will include the most accurate and updated details about how this matter is evolving.”

If your local health officials issue a boil water advisory, you should use bottled water or boil tap water. This is because a boil water advisory means your community’s water has, or could have, germs that can make you sick. Advisories may include information about preparing food, drinks, or ice; dishwashing; and hygiene, such as brushing teeth and bathing.

• From the Mayo Clinic: “E. Coli symptoms and causes”

Escherichia coli (E. coli) bacteria normally live in the intestines of healthy people and animals. Most types of E. coli are harmless or cause relatively brief diarrhea. But a few strains, such as E. coli O157:H7, can cause severe stomach cramps, bloody diarrhea and vomiting. You may be exposed to E. coli from contaminated water or food — especially raw vegetables and undercooked ground beef.

NOTE: This story will be updated.

• To reach a reporter: fern.shen@baltimorebrew.com