Two key environmental groups are appealing a judge’s denial of their petition calling on Maryland officials to crack down on Baltimore for stormwater reduction measures they say are woefully inadequate.

Blue Water Baltimore and the Chesapeake Bay Foundation had asked the court to review the city’s storm sewer system permit, which is reissued every five years by the Maryland Department of the Environment.

The permits are intended to ensure municipalities address the pollution and flooding caused by stormwater runoff and exacerbated by climate change.

But Baltimore’s permit, issued by MDE last year, is “over-reliant on shortsighted, ineffective solutions like street sweeping that do nothing to reduce the volume of runoff from rainfall,” the groups said when its petition was filed last year.

Circuit Judge John Nugent’s decision last month to side with MDE is “very disappointing,” leaders of the organizations said yesterday, announcing plans to challenge it.

“MDE needs to take into account not only the future effects of climate change, but the currently overwhelmed and crumbling infrastructure – and the burden of this failure falls disproportionately on the residents who are least able to afford it,” Blue Water Baltimore’s Executive Director Tony Bridges said in a media release. 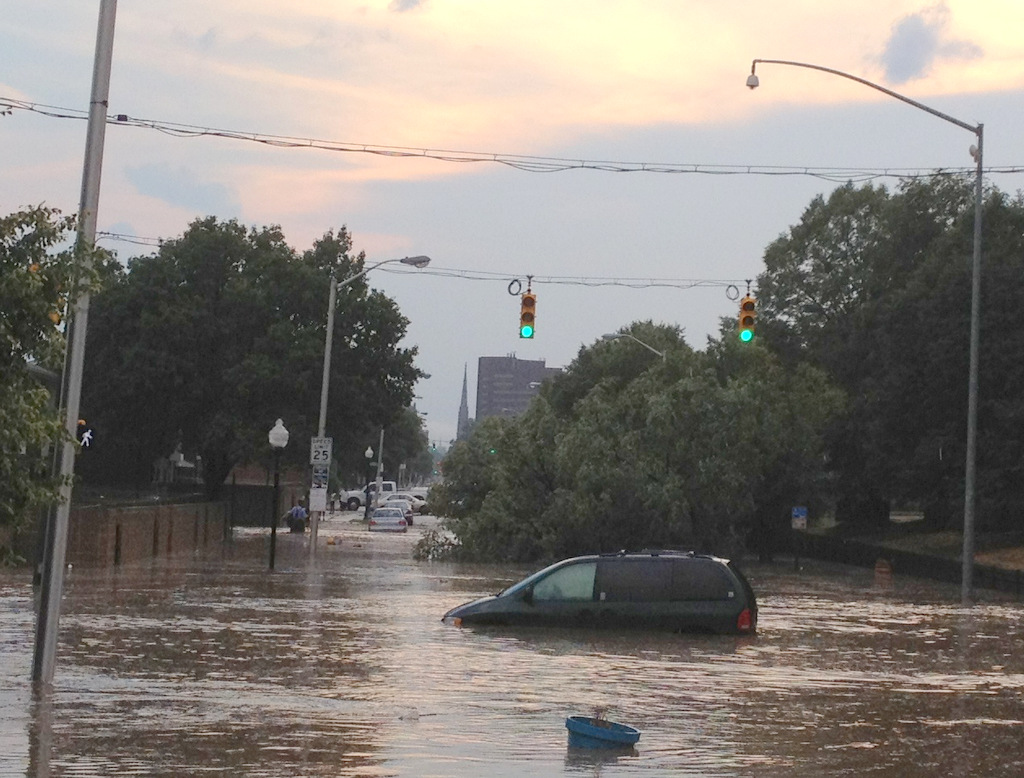 Severe flooding in 2012 turned East Madison Street into a river, swamping cars trapping drivers. Behind the van is a tree blown down by high winds. (Brew file photo)

Environmental groups have been challenging MDE’s stormwater permits since January 2021, when early drafts showed Baltimore’s was little changed from past versions and relied primarily on street-sweeping.

As climate and weather patterns have continued to shift, “Baltimore city and county are already experiencing heavier rains, flashier storms, and greater flooding,” Blue Water Baltimore argued in comments on the drafts.

Also worsening over the last decade are critical indicators of stormwater pollution, according to Blue Water Baltimore, which has a longtime monitoring program in the region. Steadily rising, the petition said, are levels of turbidity and nutrients, which promote algae growth leading to de-oxygenated “dead zones” in the Bay.

The groups also argue that the permit fails to meet environmental justice goals, with the burden falling disproportionately on Black and less affluent neighborhoods that are already suffering from poor water quality in nearby waterways, increased flood volumes, and associated public health impacts and property damage.

They also ask that the permit require management practices that control volume while treating flows, and cap the amount of credit granted to the city from a single practice, such as street sweeping.

“Street sweeping is largely targeted to the downtown business district and surrounding neighborhoods within the direct drainage to Baltimore Harbor, leaving out the many communities that have never seen a street sweeper in action,” Blue Water Baltimore said in comments on the draft permit.

“If the practice worked so well,” the group commented, “why are we not seeing in-stream improvements in these water quality parameters?”

Nugent rejected all of these arguments.

He disputed the group’s allegation that the permit violates the Clean Water Act, saying that its requirements for the city to restore impervious surfaces and take other measures are adequate, despite “contentions” that water quality is worsening.

In his August 12 order, Nugent notes that the permit “requires the City to restore no less than 3,696 acres that have not already been treated,” as well as other measures.

He also says the petitioners fail to consider other variables that could affect the levels of nitrogen, phosphorus, and other sediment.

“An example of this could be illegal dumping or discharge, he wrote. “In sum, this evidence treats the City’s stormwater discharge as the only source of discharge that enters the Chesapeake Bay watershed.”

“This Court cannot substitute its own judgment as to what might be best for the City”  – Circuit Court Judge John Nugent.

Acknowledging “that green infrastructure is another method for restoring impervious surface areas,” Nugent asserted “this court cannot substitute its own judgment as to what might be best for the city.”

“The city knows the resources or what limited resources they have, the costs associated with projects, and the uniqueness of restoring urban acreage,” he wrote.

As for the groups’ claims that the permit fails to take climate change and environmental justice into account, Nugent says the petitioners “fail to properly explain what requires the permit” to do so.

The state has adopted a 2021 report Advancing Stormwater Resiliency in Maryland (“A-StoRM”), but Nugent agreed with MDE that it must “obtain supporting data and then develop accurate, science-based standards before including this in the permit.”

“The court recognizes the immediacy of this issue, but concludes that the permit program is designed to effectuate long-term efforts to reduce pollutants and control flooding. Therefore, [MDE] did not violate federal or Maryland law.”