Average those numbers over a month and almost $12,000 was picked up by the towing company – or roughly three times as much as Bank of America, who owned the lot at the time, likely made on parking each month. Note that this estimate excludes the other 137 hours in the week.

Most of the vehicles towed from lots in Federal Hill belong to people who are visiting neighborhood for its restaurant and bar scene.

But Sam Harrington, who lives across the street from the lot, can reel off other examples. Grubhub drivers as well as customers who park for a few minutes to pick up food get towed so frequently that “you honestly stop noticing it.”

A neighbor once had to pay a $150 drop fee because his parking pass wasn’t hanging from his rearview mirror, even though Harrington and several others pointed out to the tow driver that the parking pass was visible in the car.

Lenna Vaughn, who lives on an adjacent block, has photos of Greenwood tow trucks parked at the intersection of Poultney and Patapsco street, waiting to pounce on cars that illegally park at the lot.

She recalls a man having to pay $150 after leaving his car for no more than 45 seconds to retrieve a parking pass from his daughter’s house across the street.

Greenwood’s owner, Burt “Buz” Greenwood Jr., was said to be unavailable when contacted by The Brew. The company did not respond to questions about its business practices by phone and on its website comment box. 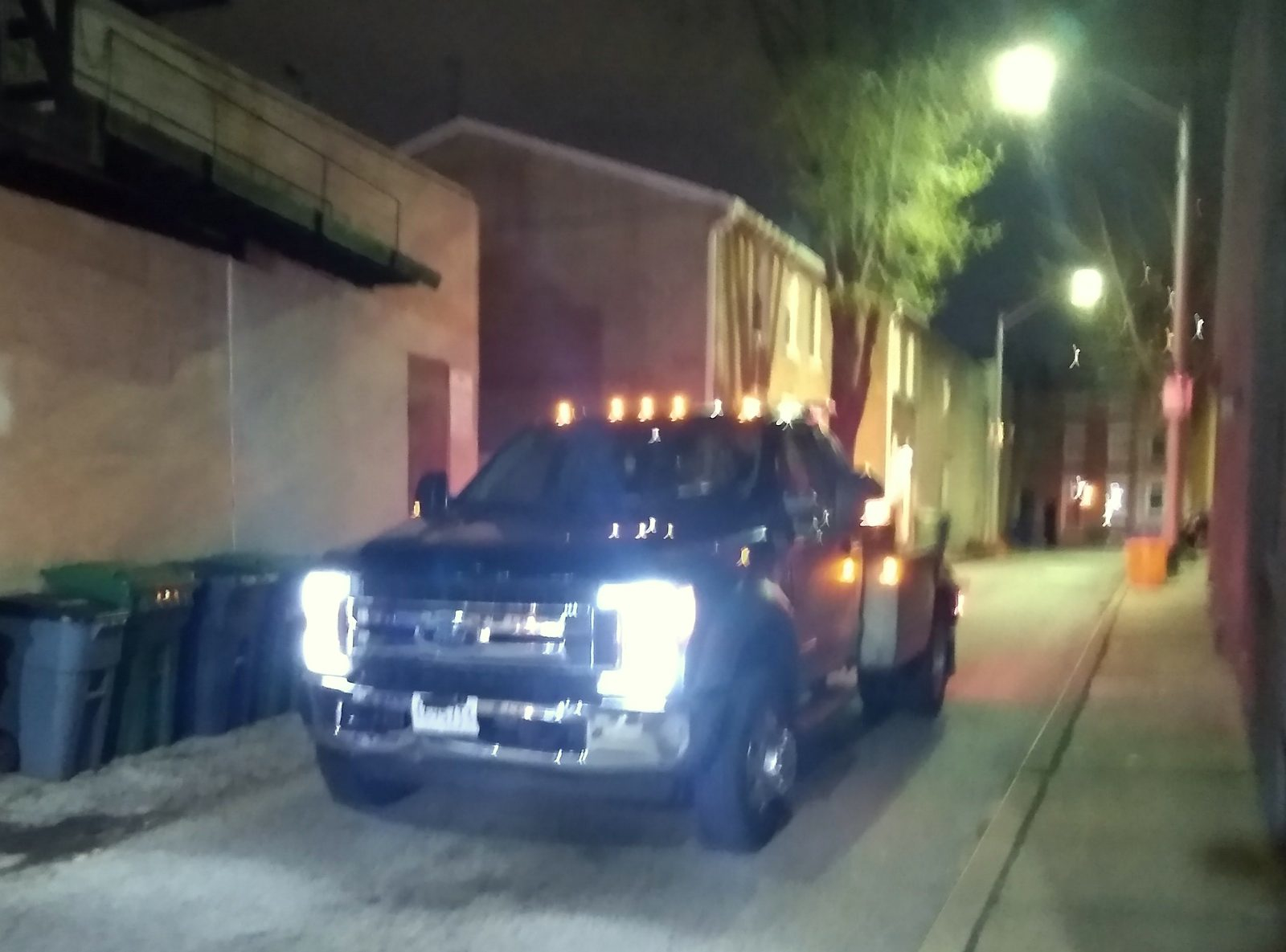 A Greenwood tow truck idles on Poultney Steet, waiting for a vehicle to park at a nearby private lot. (Lenna Vaughn)

Overly aggressive “patrol tows” – where tow operators search private property for the purpose of identifying unauthorized or improperly parked vehicles – are not unique to Federal Hill.

In written testimony to the City Council, a resident in Mount Vernon said that even during the Covid pandemic, a tow company would drive through her lot four of five times a day, looking for vehicles to pick up and remove.

“Daily there were two or three cars towed from the lot, including my ex-partner’s and my friends who helped me move out. We had paid – but the meter was broken and did not dispense proper tickets.”

The resident said her car was once towed after her monthly parking pass was delayed in the mail. When she went to pay the $300 fee, the tow company refused to accept her debit card. She said she had to call her mother to bring the $300 in cash to get her car back.

Such practices are incentivized by the high prices that Baltimore allows licensed towing companies to charge for “trespass towing,” the term used for vehicles towed from private parking lots. (There is also “police-initiated towing” of vehicles obstructing traffic, abandoned on city streets or disabled in accidents. This operation has had its share of scandals.)

While Maryland nominally sets the fee at $250 per trespass tow, it allows counties to set their rate at a higher amount.

Baltimore City uses this loophole to set rates at $300 per tow, more than double the fee in Washington, D.C., and most other jurisdictions. 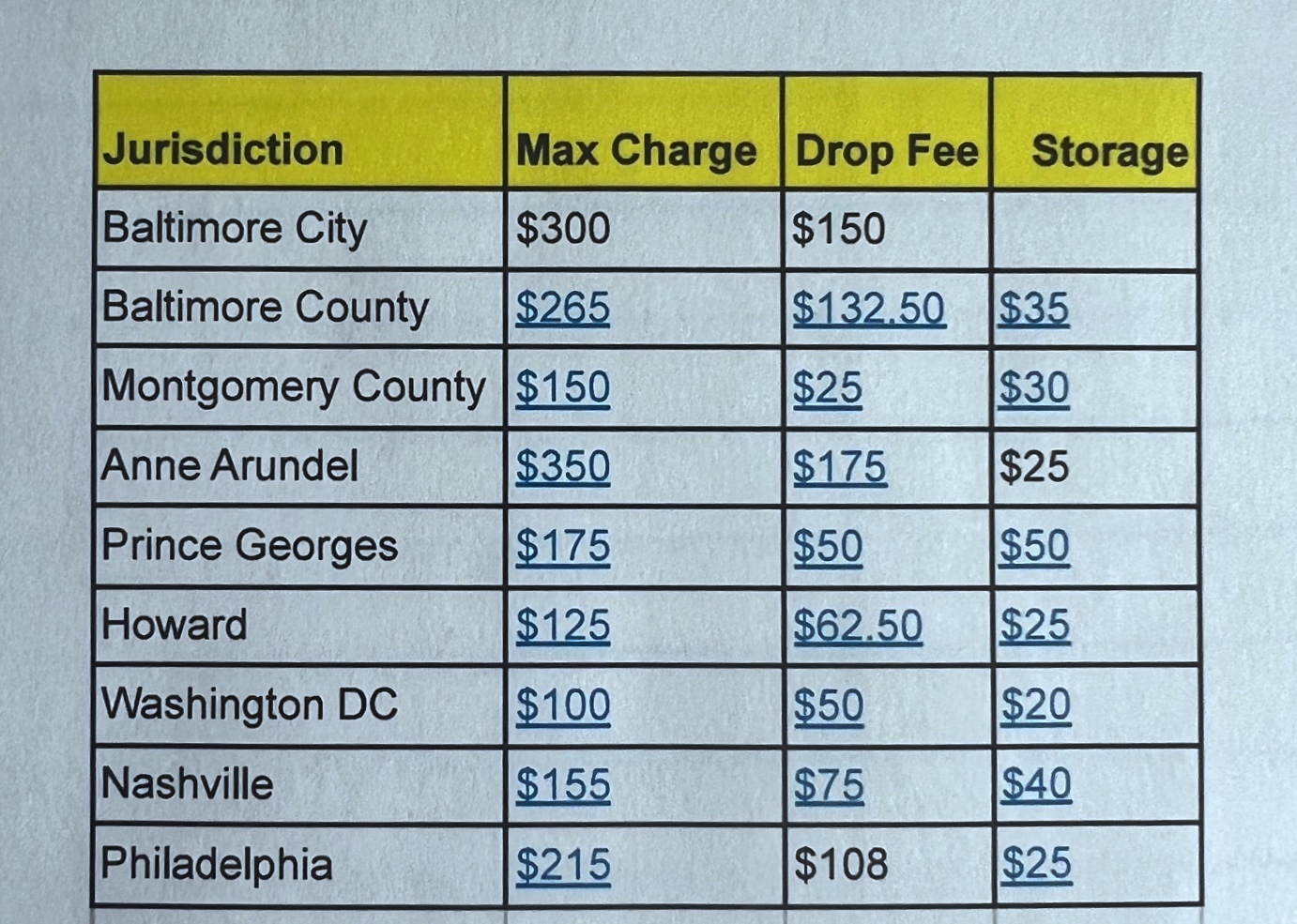 Only Anne Arundel County has higher towing fees than Baltimore City, according to this survey by Councilman Ryan Dorsey’s office. BELOW: Pollard’s Towing charges up to $1,000 to remove unauthorized vehicles from a North Baltimore lot. (Mark Reutter) 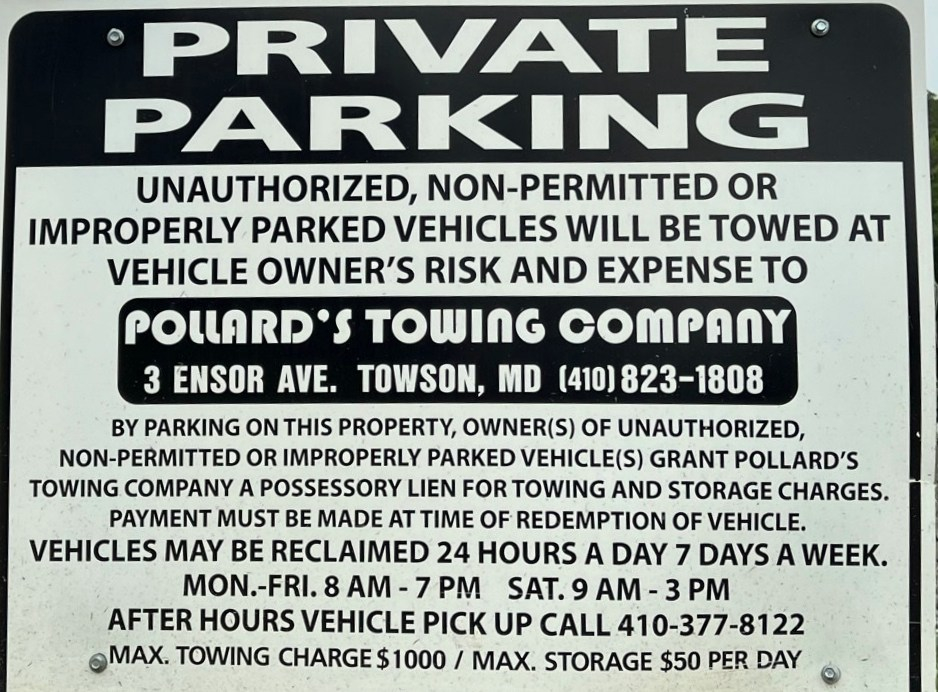 City rules also permit tow drivers to demand only cash payments, and towing yards to charge drivers more when they pay by credit card. Such rules not only hurt motorists, critics say, but make it hard to track money for taxation and other purposes.

Bill 21-0125 would reduce Baltimore’s towing fee from $300 to $250, lower the drop fee from $150 to $62.50, prohibit any charges when a vehicle has not yet been lifted from the ground, and require the acceptance of at least two credit cards for payment.

The measure also would have banned patrol towing outside of the hours of 2 a.m. to 7 a.m.

Despite hearing no objections from city agencies or from Mayor Brandon Scott, the bill sat in the Rules and Legislative Oversight Committee for a year before getting a perfunctory hearing last month.

“Best practice reforms were on the table and rejected without reason”  – Councilman Ryan Dorsey.

After the brief hearing, the committee rejected the bill in a 4-3 vote, prompting Dorsey (who was not a member of the panel) to vent his frustrations on Twitter.

“A vote was taken to continue to allow predatory towers to take advantage of people because it’s convenient for landlords and lucrative for towing companies,” the 3rd District lawmaker said.

“Best practice reforms were on the table and rejected without reason,” he declared.

Schleifer did not return a half dozen emails and phone calls seeking comment on why he opposed the bill.

Conway, originally a co-sponsor of the Dorsey bill, did not publicly explain his change of heart. Nor did he respond to requests for comment.

Contributions by the owner of Frankford Towing to Yitzy Schleifer’s campaign committee. The $4,000 donation in October 2020 cites a “Paul” Protani representing “Franfkfor Towing.” (database, State Board of Elections)

Between the bill’s introduction and the vote last month, Schleifer received $3,750 in campaign contributions from local towing interests.

She gave $2,500 to Schleifer’s campaign committee last December and, prior to that, $4,000 as  Schleifer coasted to reelection to the City Council in November 2020.

Two persons, both listed as employees of The Auto Barn, gave another $500 to the 5th District councilman, representing northwest Baltimore, in December 2021.

Councilmen Schleifer and Costello, who both voted “no” on the Dorsey bill, have swooped up contributions from towing interests.

Another key “no” vote came from Eric Costello, who represents Federal Hill, Mount Vernon and other downtown neighborhoods.

In the last year, Costello has picked up campaign funds from various towing and parking interests. They include $500 from Frankford Towing and affiliate Ted’s Towing, and $2,000 from Arrow Parking’s Ben Greenwald. 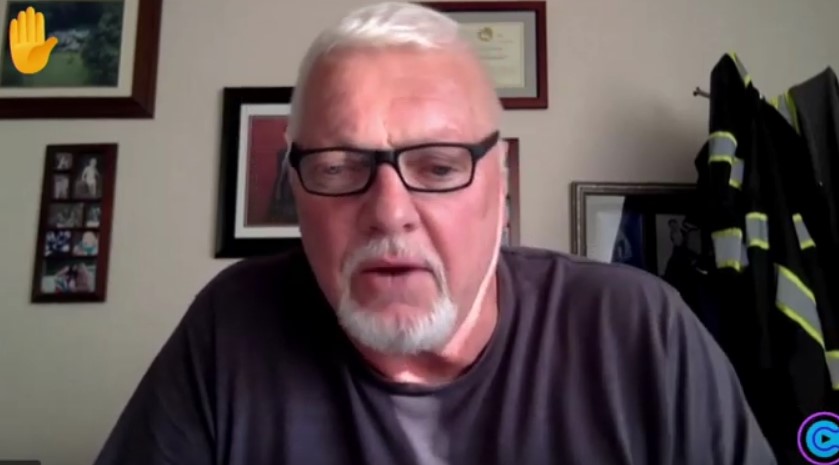 Testifying at the September 15 Council hearing, Charles Parrish said flaws in the Dorsey bill would have serious safety consequences.

“If this bill [passes], there is no public safety for the [tow-truck driver] or for the property owners or management,” he said, arguing that the presence of tow trucks improves the security of those using parking lots and garages at night.

Another towing industry representative, identified only as “Norman,” said Dorsey’s measure posed a threat to a business that people “love.”

“People complaining? I don’t know who Councilman Dorsey is talking about. People love it when we come. I’ll show you the emojis. They appreciate it,” he said, describing the Dorsey bill as “shameful.”

“People love it when we come. I’ll show you the emojis”  – Towing Representative “Norman.”

Frankford Towing’s Protani did not testify before the Council, but she worried in an interview about the now-defeated bill’s restrictions on patrol towing.

“If the general public found out no one can patrol tow, they would abuse it,” she told The Brew. “Frankford doesn’t patrol tow, but some towers do, and some businesses have a legitimate need for patrol towing.”

Asked how to handle tow companies that abuse the public, she said, “Someone should do a study to see how many places need patrol towing during daylight hours before this bill moves forward.”

• Zac Blanchard is a freelance journalist and resident of Federal Hill.
• Mark Reutter contributed to this article.