Looking back on her past two years at The Catholic High School of Baltimore, Yury Guardado Iglesias says the fact that she and her family are Pentecostal was never considered a problem.

It was something her family disclosed when she applied, and noted every year on paperwork for the full financial aid she was receiving – a Samuel Ready Scholarship given to academically promising young girls.

A branch of evangelical Protestantism, Pentecostalism shares many beliefs with Catholicism. But there are some differences, including, for instance, beliefs about the Eucharist.

The school accommodated Iglesias by allowing her to stay in her pew during church services rather than take communion with her classmates.

Ahead of this year’s ceremony to bless junior class students’ school rings, a big event at the all-girls school in northeast Baltimore, Iglesias’ mother, Yury Mena, emailed the school to make a request.

Could her daughter participate, but not have her ring blessed? Pentecostalism differs from Catholicism on matters of authority and ritual, emphasizing a direct personal experience with God.

But rather than respond to the October 10 parental email, Iglesias says, school officials summoned her out of class to the office of the school’s president, Dr. Barbara D. Nazelrod.

There Iglesias was questioned – harshly, the 16-year-old says – by Nazelrod as well as by Sister Ann Dutrow and Karen Mitchell, the dean of students.

“Dr. Nazlerod said, ‘Why is it that you don’t want your ring to be blessed?’” Iglesias recalled. “She reminded me, ‘You know this is a Catholic school.’”

“My hands were cold. My voice was soft. I felt cornered. I was sobbing”  – Yury Guardado Iglesias.

Iglesias said she tried to explain that it was her parents’ request, but the questioning continued, with Sister Ann pressing her to explain why her religious beliefs precluded her from having her ring blessed.

“My hands were cold. My voice was soft. I felt cornered. I was sobbing,” she told The Brew.

By the end of an hour, she was told she didn’t belong at a Catholic school and that “I would be a perfect fit for a public school like Patapsco High School,” the Baltimore County teen recalled.

Days later, her parents were summoned to the school and told Iglesias was being expelled.

Mena, who is not fluent in English, said through a translator that the administration’s actions didn’t make sense.

“They said she was being disrespectful and violating school rules,” Mena said. “I asked, ‘Why wasn’t I called in to be questioned? Why did you question my daughter?’” 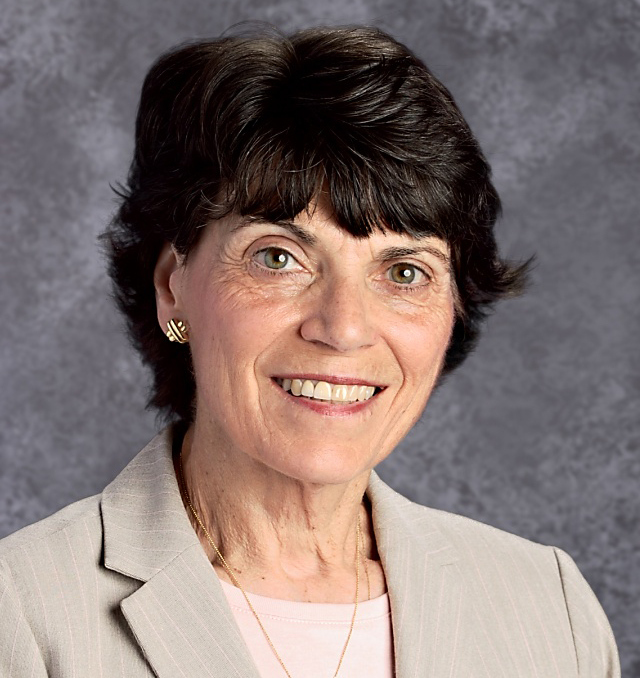 School officials told The Brew they would not discuss what happened at the meeting or explain the reasons behind the girl’s expulsion.

“Legally, neither Mrs. Wetzel [the school principal] nor I are able to tell you what happened,” Nazelrod said during a brief phone conversation.

To one of Iglesias’ mentors, Dinorah Olmos, the situation is “not only infuriating, but just not right.”

Olmos, founding president and CEO of the Latino Education Advancement Fund, got the parents to send the school a letter granting them permission to talk to her about their daughter’s expulsion. But Olmos says school administrators haven’t responded to requests to do so.

“Legally, we are not able to tell you what happened”  – Barbara Nazelrod, school president.

Turning to the Archdiocese of Baltimore on the girl’s behalf, Olmos was told it has no authority.

“Catholic High is an independent private school and not an archdiocesan school, therefore, the Department of Schools basically doesn’t hold any jurisdiction,” Christian Kendzierski, executive director of communications for the Archdiocese, told The Brew.

Such schools belong to the Association of Independent Maryland & DC Schools, and, according to Kendzierski, “independent schools have their own policies and practices.”

Olmos called the situation frustrating. “It’s a huge disadvantage when schools do not belong to a higher authority that can get involved.”

She is still hoping to learn why such a promising student was “kicked out and treated like a criminal.”

Iglesias is an undocumented immigrant whose family comes from El Salvador. Her stepfather works in construction.

She wanted to get into a county magnet school, but, at Olmos’ suggestion applied and was accepted at the Institute of Notre Dame.

But before she could begin there, the school closed permanently, so Iglesias went to the only Catholic school that accepted her at that point, Catholic High.

Academically, she has excelled and even won a scholarship to attend the honors summer math camp at Texas State University earlier this year. 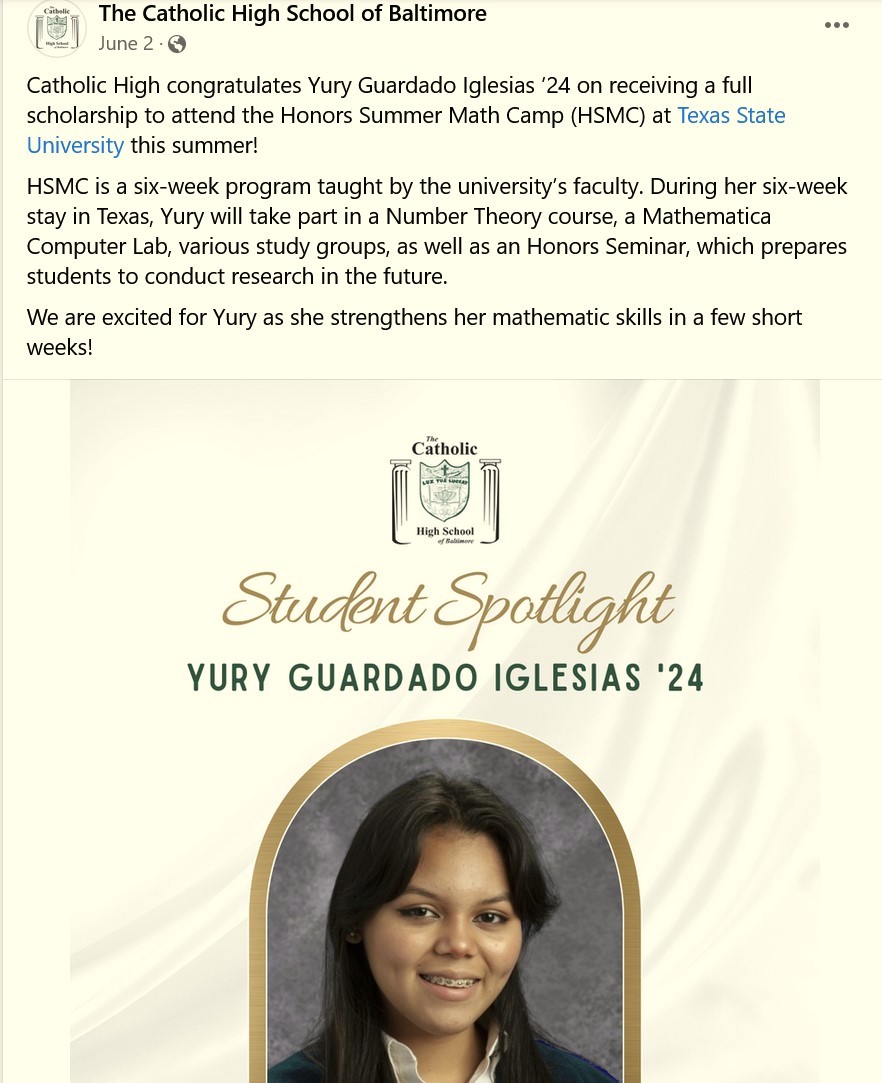 “What happens to her scholarship money now?” Olmos said.

A spokesperson for the Samuel Ready Scholarship (SRS) program responded to a query from The Brew, but has not yet provided answers to our questions.

11/21/22 UPDATE: SRS has provided us with a full response, now included below.

All this leaves Iglesias looking for an apology. She is not interested in returning to the school and wonders whether her explusion was a case of religious discrimination.

Nazelrod, who has headed the school for more than two decades, discussed this issue in a published Q&A interview.

“When I meet with prospective parents, I’m often asked that question, ‘My daughter’s not a straight A student, she’s not Catholic, we’re not Catholic. Can she come here?’” Nazelrod told the interviewer.

Archdiocesan schools also say they have an open admissions policy.

“Non-Catholics are invited and welcomed to enroll in our Catholic schools,” Kendzierski told The Brew. “They are not required or expected to participate in sacraments. Example: going to communion when attending Mass or participating when confession is offered, etc.” 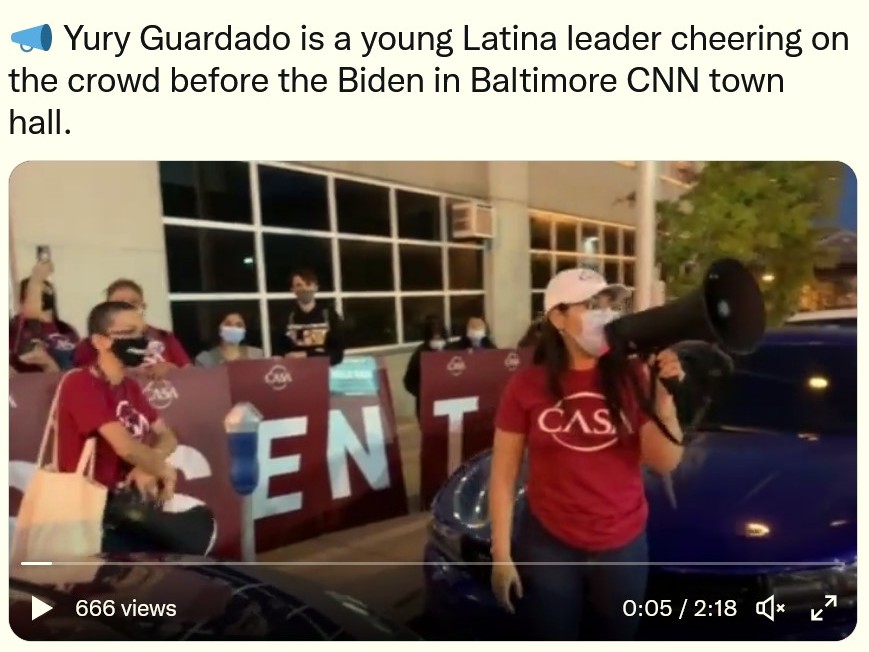 So what happened here?

Olmos said she can only speculate, but she suspects that Yuri’s self-assured demeanor and intellect were the source “of this very unfortunate incident.”

A video tweeted by the advocacy group CASA last year shows what Olmos is talking about.

“My dreams have been crushed but not by choice – I need citizenship now,” Iglesias says, speaking into a megaphone to rally the crowd outside President Joe Biden’s appearance at a CNN town hall in Baltimore in October 2021.

Olmos’ conclusion: “Yury is very outspoken. She is the brightest student to me. And it just rubbed [these school administrators] the wrong way.”

This YouTube video, published by The Catholic High School of Baltimore, depicts the 2020 Junior Ring Ceremony. Sister Ann Dutrow blesses the rings at about 43 minutes in.

Today, SRS provides scholarship funding directly to five Baltimore-area independent schools to support the education of young women. In alignment with our status as a 501(c)(3), Type III non-functionally integrated supporting organization, SRS provides scholarship funds directly to our supported schools. Those schools recruit and select students to receive scholarship funds, without input from SRS. Our Board’s Scholarship Committee annually reviews the student selections by each school, for both new and current students, to determine if those selections meet or continue to meet the organizational mission. SRS approves overall funding to the supported schools, each year, through calculations required to meet SRS’s legal and fiduciary duties.

In 2020, one of our supported schools, The Institute of Notre Dame (IND), ceased operating as a school. When IND closed its doors as a school, there were a number of students who had received the benefit of SRS funds through IND and were going to be left with no access to an independent school education. Unique circumstances and the cooperation of IND as an on-going entity allowed SRS to take the extraordinary step to continue to allocate funds to IND to allow it to make distributions to other independent schools in which these six students had enrolled. A representative from IND has continued to make these annual recommendations to the SRS’ Scholarship Committee. IND remains one of our supported schools in this limited role. None of the schools at which the former IND students enrolled is listed as a supported school in SRS’s charter and, when the former IND students graduate, funding to IND will cease.

Given the requirements for maintaining privacy of matters involving students, SRS will not comment on circumstances involving individual students, groups of students, or operations of the schools. We direct any additional inquiries regarding this matter to The Catholic High School.