When Martha Spielman showed up at MedStar Union Memorial Hospital’s emergency department, she was weak and going in and out of consciousness.

Spielman, who is homeless and has been living in shelters and on the street, had been brought there in the early morning hours of December 4 in an ambulance called by homeless service provider Christina Flowers.

The 75-year-old was slumped next to a bus bench on Centre Street near Guilford Avenue when Flowers spotted her in obvious medical distress.

“I remember I felt so sick I got dizzy. I passed out, and I landed on the ground,” Spielman told The Brew.

But shortly after the staff at Union Memorial found that Spielman had tested positive for Covid-19, she says the hospital told her she had to leave.

“They put me out. It was cold. All I had on was a sweater,” Spielman recalled. “They gave me a nurse’s outfit – green scrubs, size medium – and two bus tokens.”

While Spielman remains angry about what happened, saying “it just isn’t right,” advocates for the homeless and other sources say such treatment is not unusual these days.

Since June, when the city closed the isolation center set up during the pandemic at the Lord Baltimore Hotel and “demobilized” other non-congregate housing, there have been few places for Covid-positive homeless to go to isolate.

The Triage, Respite and Isolation (TRI) Center, which opened in May 2020, had been an invaluable resource for the city – a place where where more than 3,500 frontline workers, homeless persons and other citizens were able to stay until they were no longer infectious.

Nothing on that scale has been set up to replace it, creating an increasingly urgent problem for Baltimore hospitals that are now strained due to a winter-season spike in Covid cases, influenza and RSV.

“I’m just really angry about this,” said the source, complaining that hospitals are left with two choices, equally poor.

“We are either discharging them to the street,” the source said, “or we’re holding them for 10 days, which we can’t always afford to do when there are people with more acute medical problems who need beds.”

During last week’s severe cold, “people have been very reluctant to discharge – it does not feel good.” 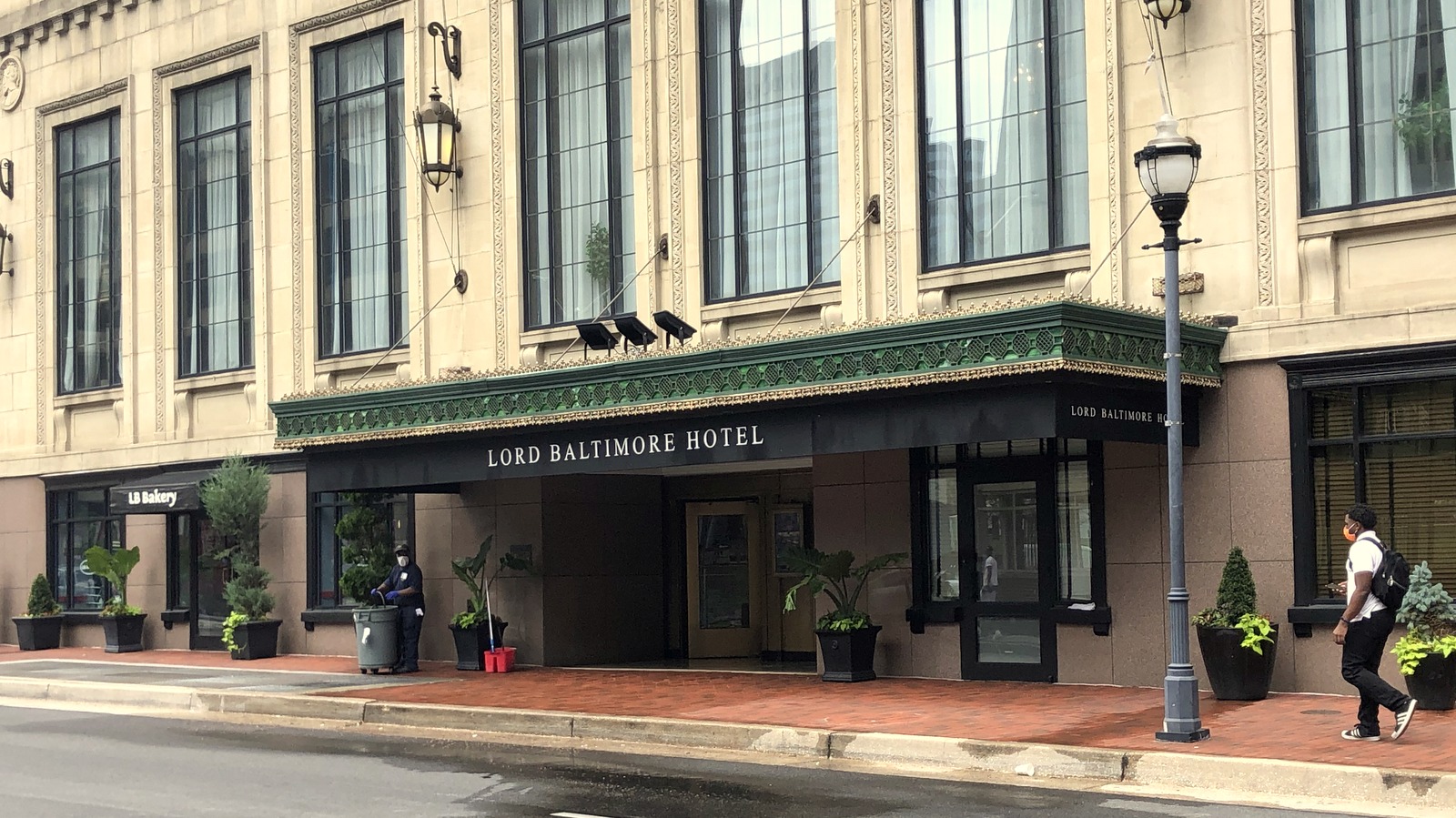 The downtown Lord Baltimore Hotel was converted to a Covid isolation center during the height of the pandemic. It was closed down in June. (Fern Shen)

Flowers, who has been working with homeless people for years, said she knows of others who, like Spielman, were sent away from emergency rooms as a result of the safe housing shortfall.

“It was a lot better when we had some place for vulnerable people with Covid to go,” she said, adding that Covid numbers “are climbing among our homeless right now.”

The shortage of isolation space comes at a time when emergency shelter space in general is scarce, and the city is under fire for failing to make use of pandemic relief funds promised for homelessness programs.

Advocates had been pressing the issue with Mayor Brandon Scott, who has frequently called reducing homelessness one of his administration’s top priorities.

Scott announced last February that he was earmarking $90 million in federal funds to go towards  programs to prevent and mitigate homelessness.

Included in his announcement was $75 million in American Rescue Plan Act (ARPA) money “to cover the purchase of two hotels, including renovating and operating support for non-congregate emergency housing.”

Nearly a year later, the hotel purchases have not materialized.

Meanwhile, the number of shelter beds in non-congregate settings, where the risk of disease transmission is lower, has decreased.

“The dearth of emergency shelter now is huge, especially for subpopulations of extremely vulnerable folks, such as homeless women, families and fragile psych patients,” said Lauren Siegel, adjunct instructor at the University of Maryland School of Social Work.

Advocates have called for better planning to protect homeless people as pandemic programs are wound down.

They have held protests and, in October, clashed with police over encampment clearings.

On December 22, a man believed to be homeless burned to death a few blocks from City Hall on Guilford Avenue, police reported. 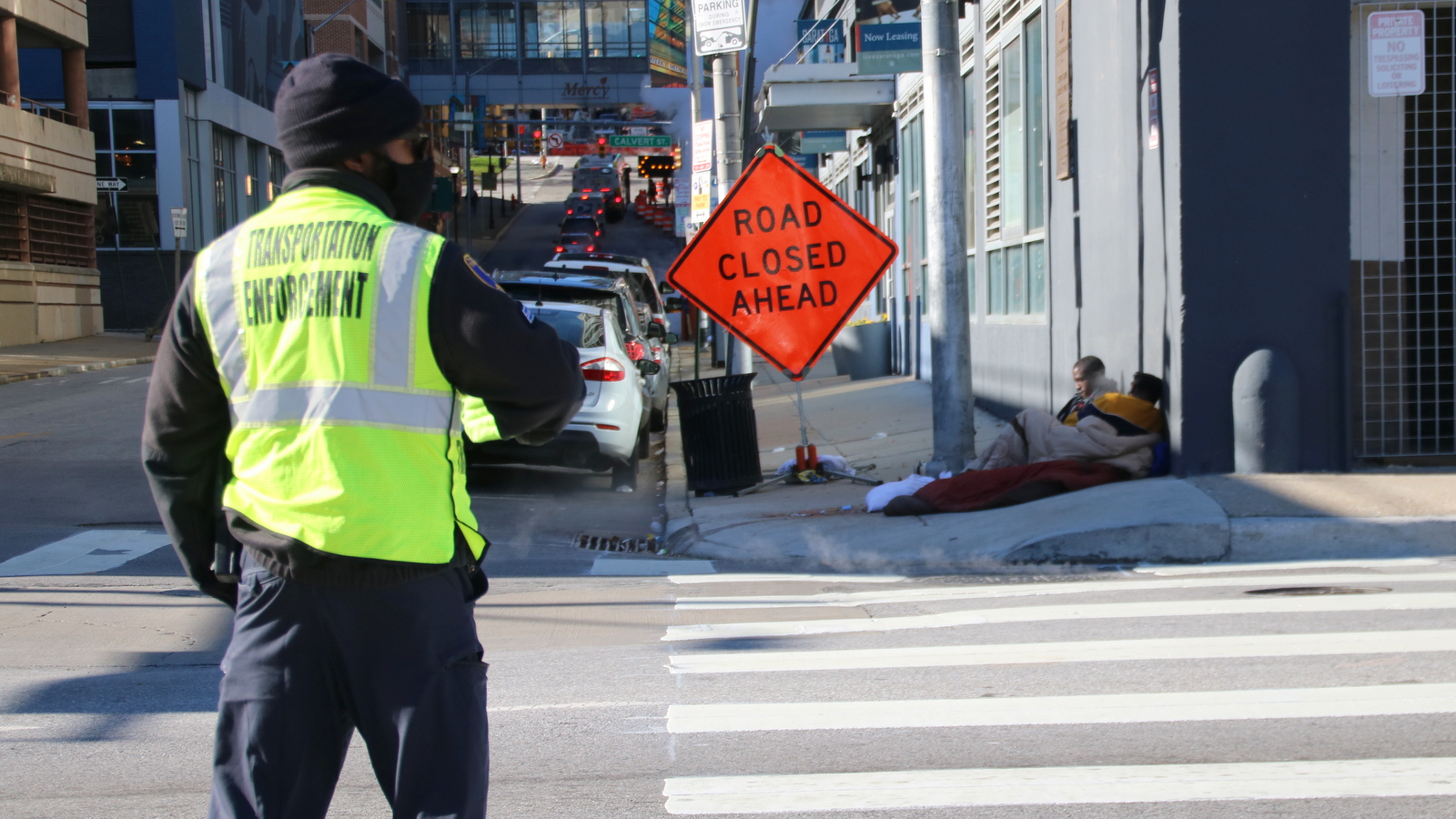 The shortage of space for unhoused people, advocates say, makes the risk of Covid transmission a constant worry.

“They are either on the street or at shelters where not everyone is competent to know to put a mask on or pull it up, and no one tells them to,” Flowers said.

The Weinberg Housing and Resource Center on the Fallsway has some rooms where Covid-positive clients can go but, says Mark Council, lead organizer with Housing Our Neighbors, many feel cooped up and don’t always stay in the rooms.

“People using the shelters are very worried. They want mandatory testing and everything. They want to be safe,” said Council. “But the city is not putting a lot of things in place.”

Information about the city’s current isolation practices will not be available from the Health Department until later this week, city officials said. In the meantime, the following statement was released to The Brew:

“As the impact of Covid evolves, the Mayor’s Office of Homeless Services (MOHS) continues to follow the guidance of the Baltimore City Health Department to safely shelter our neighbors experiencing homelessness, including those who test positive for Covid,” said Kyana Underwood, MOHS spokesperson.

“Currently, residents of non-congregate shelters may isolate in their rooms after testing positive for Covid,” she said, noting that the agency is “finalizing a partnership with a local shelter to offer additional isolation and quarantine spaces for Covid-positive individuals who are experiencing homelessness, especially those exiting local hospital facilities.”

But MOHS and the Health Department are not ready to announce the details, Underwood said

Carolyn Johnson, managing attorney for the Homeless Persons Representation Project, said the Lord Baltimore isolation site had worked well. “If there was no shelter space, the hotel would hold people for weeks and weeks,” she noted, calling for it to be replaced with an effective strategy.

“With an increase in Covid rates happening again, there should be a plan,” Johnson said. “Something’s not working. The hospitals have discharge policies for the homeless. The city was supposedly expanding isolation space in shelters.”

The city’s page announcing the closure of the Lord Baltimore Hotel site offers few alternatives for people in need of isolation.

“It says, ‘Please do not call the city shelter hotline at this time to refer new Covid-positive clients to the shelter,’” Johnson stated. “This mostly tells you what not to do.”

A MedStar spokeswoman said she could not comment on Spielman’s case because of federal patient privacy laws.

“But without exception, our emergency team at MedStar Union Memorial Hospital is dedicated to providing the highest level of safe, quality healthcare to every patient who comes through our doors,” said Debra A. Schindler, regional director of media and public relations.

“Our emergency team is dedicated to providing the highest level of safe, quality healthcare to every patient”  – MedStar Health.

“Our documented discharge process includes a team of social workers who work with patients, regardless of Covid status, to provide a safe and appropriate discharge plan,” Schindler continued, in an emailed statement.

“When patients do not meet admission criteria and a discharge cannot be arranged, patients who choose to stay are often admitted,” she said. 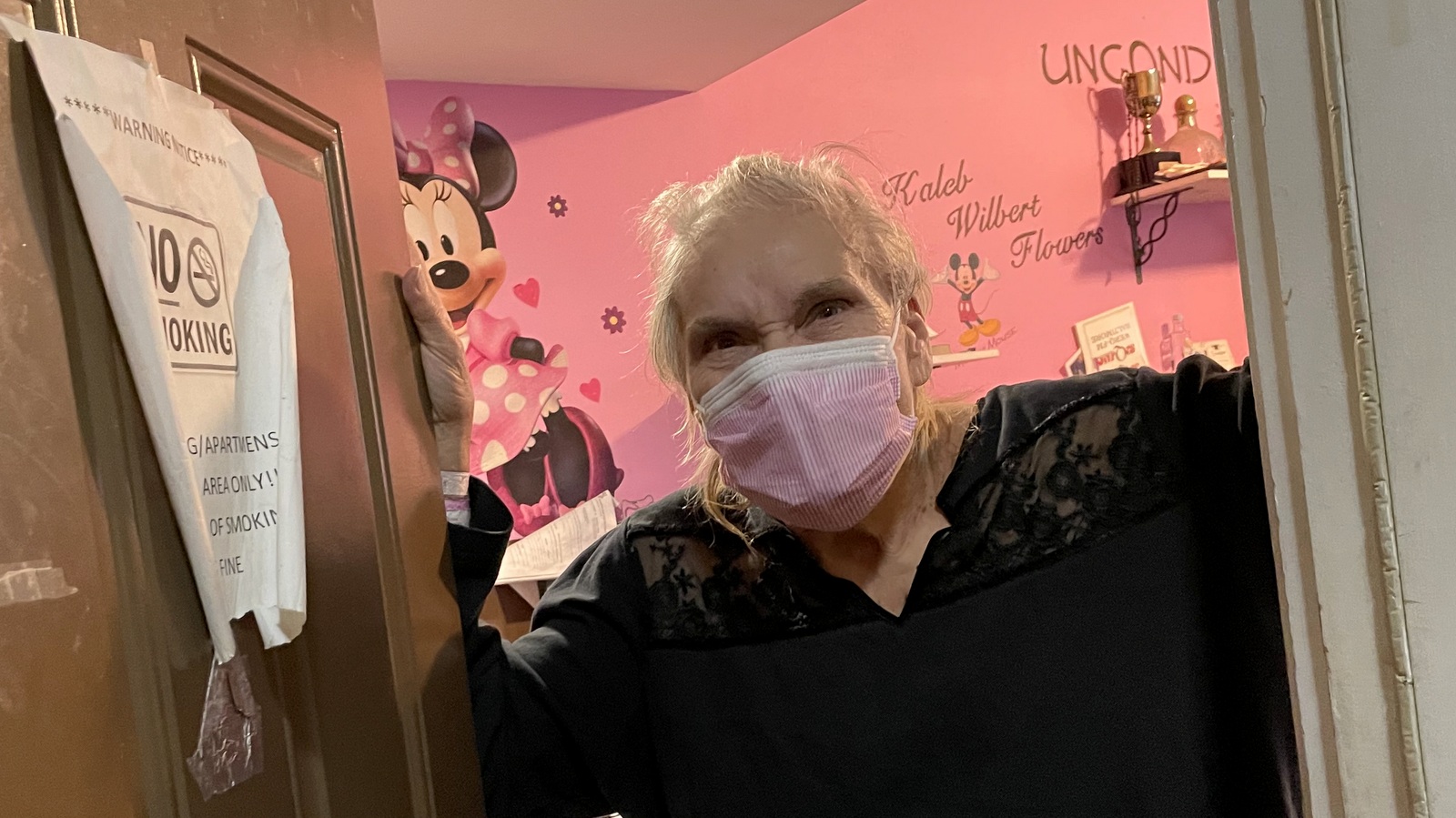 Martha Spielman has housing for the moment. On December 4, she struggled to find shelter after collapsing on a Baltimore street. (Fern Shen)

As Spielman tells the story, things got worse that night before they got better.

After exiting Union Memorial, she says she caught a bus downtown to My Sister’s Place Women’s Center, a day program on Franklin Street.

She was hoping to get transportation from there to the Lockerman-Bundy shelter, a former elementary school in West Baltimore.

Still woozy, she ended up taking another bus to the shelter. A staffer who saw her condition (“I threw up in a trash can”) called for an ambulance, which took her back downtown to Mercy Medical Center.

At Mercy, she said, she was found to have a ruptured hernia. She was treated surgically and kept there for over a week, at that point no longer Covid-positive.

“I guess someone really does care about somebody like me”  – Martha Spielman.

Spielman didn’t offer much about her past. Born and raised in South Baltimore, she lived for a time in Louisiana, worked in health care and was also “a jack of all trades.”

But she has sharp memories of how she narrowly escaped with her life a month ago.

“The Mercy doctor told me I would have died if I didn’t have that surgery. I said, ‘Who would care if I live or die?’” Spielman recalled, tearing up.

“The woman said, ‘We would. We would care.’ So, I guess someone really does care about somebody like me.”

• To reach this reporter: editors@baltimorebrew.com.