Lunches at Haussner’s with Orioles owner Peter Angelos were wonderful and weird, but what if he agreed to one now, after 11 losing seasons? Sportswriter Mark Hyman plans what he’d ask after the first martini. 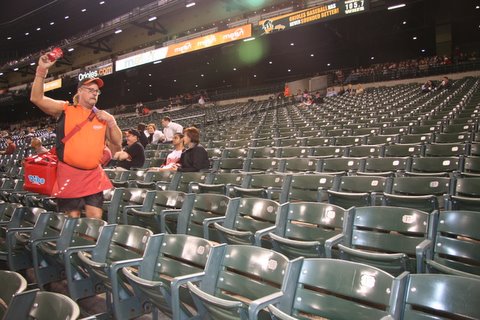 The longest lunch I ever had – three-plus hours under a gilded frame at Haussner’s – was with Peter Angelos. That was in October 1994, and the topic du jour was the worsening labor strife between baseball players and owners. I used to love going to lunch with Mr. Angelos because you could be assured of leaving with some startling quote, one you hardly could wait to see in the next day’s paper.

This lunch was Exhibit A. Mr. Angelos, unable to hide his contempt, was complaining about management’s negotiating team. Bud Selig, then baseball’s acting commissioner, wasn’t up to the task, he confided. “He is a very successful automobile dealer. What makes him think he has the abilities to do what he is trying to do here is beyond my comprehension!”

I miss my lunches with Mr. Angelos, the Oriolesâ€™ iconoclast owner. They ended about five years ago, when he objected to something I wrote in BusinessWeek, demanded that I reveal my source and, after a prolonged harangue, hung up. I’ve tried to reach him since, but I’m clearly off the preferred lunch-companion list.

Our falling out hasn’t diminished my interest in him. If anything, I’m more curious. I want to know what he’s thinking about lots of subjects. What happens to the Orioles when he dies? Why are both Frank and Brooks Robinson estranged from the franchise? Is he still having his periodic private lunches with Cal Ripken Jr. supposedly looking to a day when the Iron Man would become an Orioles investor or even team president? Why in these lean financial times does an Uncle Teddyâ€™s pretzel at Camden Yards cost so darn much?

Most of all, I’d like to pose this straight-forward question. What have been your mistakes? Not those of employees whoâ€™ve come and gone, and come and gone in the 15 years that the ballclub has been in your hands. But yours?

Clearly, lots has gone awry these past 11 losing seasons, when the blame game has been about the most interesting thing to watch at Camden Yards. It’s always somebody’s fault. Some of us remember when it was Frank Wren’s fault, then Jon Miller’s and then Phil Regan’s. After that, it was Roland Hemond’s turn, then Doug Melvin’s, Frank Robinson’s, the late Syd Thrift’s, the late Johnny Oates’, Pat Gillick’s, Davey Johnson’s, Mike Hargrove’s, Lee Mazzilli’s, Jim Beattie’s, Sam Perlozzo’s – have I missed anyone? All were fired, released, reassigned, let go, given the boot, during this leanest of decades for baseball in Baltimore. An era of stability, if not prosperity, seems to have come over the franchise of late. Team president Andy MacPhail and manager Dave Trembley, both in their second seasons, seem to know what they’re doing and, so important, to have been given the authority by ownership to do it most of the time. So that’s encouraging.

Still, when does the buck stop with the managing general partner?

Indirectly, Mr. Angelos has addressed this question. A few years ago, the owner consented to a lengthy interview with Stan Charles, the sports radio talker and publisher of the Baltimore sports newspaper called Press Box. During the interview, Mr. Angelos was asked why the Orioles are losers every year. He responded that the Orioles were poor, compared to the big-market, deep-pocket Yankees and Red Sox, and as a result severely handicapped. (Maybe he would answer the same way now, though some key things have changed. Mr. Angelos’s holdings now include MASN, a lucrative regional cable sports network that supposedly is a license to print money.)

In the interview, Stan Charles kept going, asking Mr. Angelos to explain the success of teams like Minnesota and Oakland that have meager financial resources but MUCH better records than the Orioles.

Mr. Angelos replied: “The only answer I can give you is better luck, as well as more astute general manager performance. I don’t mean to take away from any other general manager and particularly the people who are with the Orioles….” On the Reassurance Meter, this explanation barely moved the needle.

What would be gained if Mr. Angelos stepped forward and accepted responsibility for a lot of the disappointment that has been the Orioles? If he held a news conference to say: “I’ve made more mistakes owning this team than I can count. Sorry.”? It wouldn’t buy Jeremy Guthrie even one more win. The Yankees would still have a $200 million-plus payroll.

But it would go a long way toward mending the owner’s reputation as a standup guy. And who knows, he might get off a couple of good one-liners. When we were having our lunches, he always did.