Bicyclists who generally use their bikes for transportation and pleasure turned them into vehicles for mourning and advocacy Sunday, as they gathered to remember fallen Baltimore cyclist Nathan Krasnopoler.

On the one-year-anniversary of the accident on a city bike lane that claimed the life of the 20-year-old, about a dozen cyclists toured Baltimore wearing orange vests that said “Nathan’s Ride.”

Their seven-mile memorial ride took them along Guilford Ave. designated as the city’s “bike boulevard,” and along Mount Royal Ave., where cycling advocates are pushing the city to resist pressure to kill a planned bike lane. 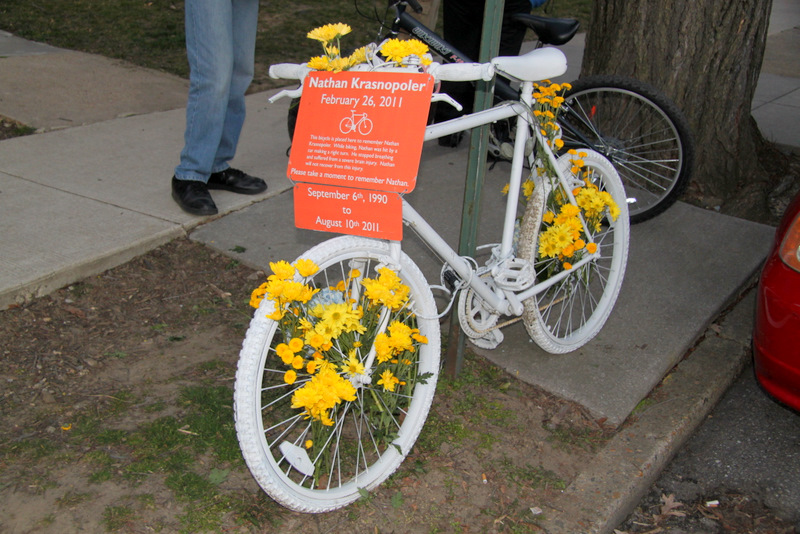 As the riders processed down University Pkwy., they came to the white-painted “ghost bike” placed near the Broadview Apartments, the home of the driver who turned right that Saturday morning, striking and killing Krasnopoler. He had been on his way home from the Waverly farmer’s market and riding in the marked lane.

Earlier in the day yesterday, Krasnopoler’s mother Susan Cohen had decorated the memorial bike with yellow flowers, twining them into the spokes and attaching them to the handlebars.

“It’s very sad. It’s been a year I wouldn’t want anyone to experience,” Cohen said. “It’s left a huge hole.”

“We hope to make Maryland roads safer,” Cohen said, reviewing the legislation the family has been promoting in the Maryland General Assembly.

The bills they’re pushing would require Maryland drivers to pass competency tests and would increase penalties for failure to remain on the scene of a serious accident.

Jeannette Marie Walke, the 83-year-old woman who plead guilty to negligent driving and failure to yield right of way to a bicyclist in a designated lane, permanently gave up her license as part of her plea.

“It could have been any of us,” said Penny Troutner, of Light Street Cycles, one of the bicyclists who joined in the memorial ride.

Some of Nathan Krasnopoler’s friends, like Rosemary Mallonee, mourned his loss with even longer rides.

“I started riding at dawn,” said Mallonnee, a Hopkins junior. “I was listening to the kind of music he liked.” He liked “really strange music,” other friends of Nathan added. “Like techno-bagpipes!” 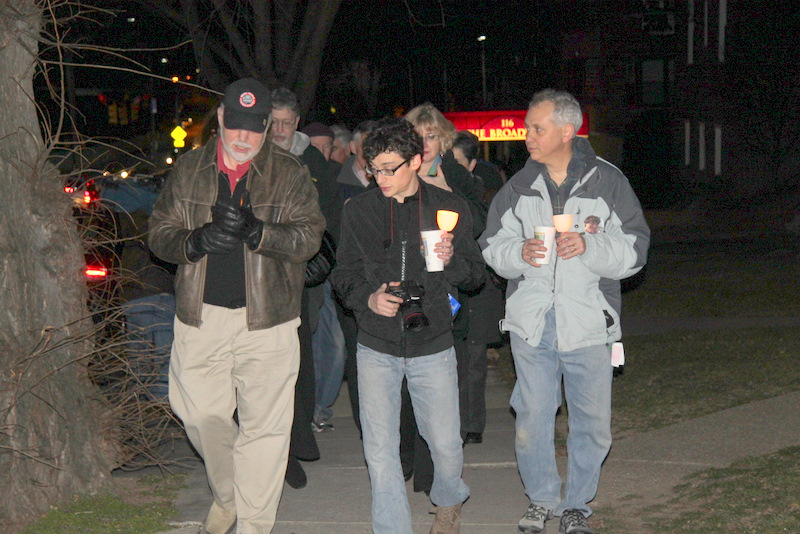 Eventually, the assembled crowd swelled to more than a hundred for a memorial service o be held a few blocks away on the Hopkins campus.

Candles were handed out and the bikers, joining those who had walked or driven, held them to the handlebars and walked slowly up University Pkwy. The line stretched the length of the block.

Susan Cohen walked at the very end of the line with the stragglers, reliving the tragedy that left Nathan in a coma for months until he died on Aug. 10.

“We lost him right here,” she said, looking down the bike lane toward the Broadview. “He really died that day.”