The Baltimore street artist known as Toven is a man in pain.

Literal pain, because he was badly injured in an industrial accident a few years back, and has two artificial discs, two titanium rods and six screws in his spine; two screws in his shoulder; and another plate and eight screws in his leg. He depends on prescriptions to cope, to the point where he has designed a personal logo: a caplet with “Toven” printed on it.

Spiritual pain, because his twins, a boy and girl born prematurely last year, died within a matter of days.

Like any good artist, he’s managed to translate personal adversity into some of his best work. 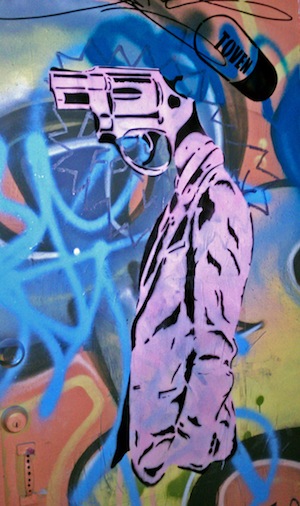 Last year, his hand drawn paintings, which he pastes to buildings, began to feature guns. In one, Naked Lunch author Willliam S. Burroughs, aims a handgun with a maniacal expression. In Toven’s “Mr. Baltimore” poster, plastered around the city, a man in a suit has a snub nose .38  instead of a head.

There is something playful about the artist’s use of firearm, which makes fun of city’s reputation for violence. But of course there is a darker side as well. “Some people like Mr. Baltimore a lot, some people hate it,” says Toven, who asked that his real name not be disclosed. “But I say we live in Baltimore. It’s not the most peaceful city.”

When asked if there was a connection between the gun imagery and the loss of his children, he reflected on it for a while and said the tragedy “affected my art more than I realized. I hadn’t thought about it before.”

Toven admires outsiders. He is particularly fond of Edgar Allan Poe, whose last days before his death in Baltimore in 1849 are caricatured in the Hollywood horror-action film, “The Raven.” In it, Poe comes across as an alcoholic and a slacker, a figure out of a cartoon.

Toven’s take on Poe is different. The artist created a larger-than-life portrait of the writer that stares over a parking lot on the south side of West 20thStreet, just off of Howard Street, depicting Poe in a NASA spacesuit. It’s a startling image, wildly anachronistic, but it rings much truer than the Hollywood version of Poe, who was after all an explorer of the dark spaces of the imagination and a pioneer of literary genres. 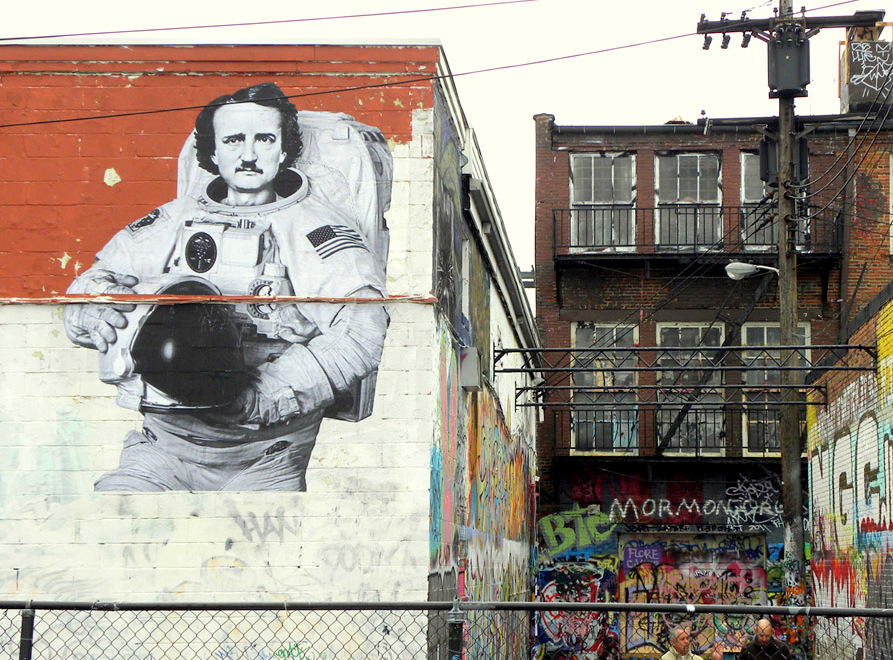 For the Baltimore artist, who has also produced fake one hundred dollar bills with Poe’s picture on them, the 19th century fantasist is associated with the pain of loss and life’s transience. “All that we see or seem is but a dream within a dream,” Toven said, quoting one of Poe’s most famous poems.

Toven doesn’t want to say too much about his background. But he is a Baltimore native who spent ten years in New York, where he studied business and worked in his spare time creating images with aspiring film makers.

He lived not far from the World Trade Center towers, and moved back to Baltimore shortly before September 11, 2001. To follow a woman, he said.

He was still interested in art, but Baltimore was a different world from New York. “Baltimore is kind of a strange city as far as the art scene goes,” he said. “Most of the interesting stuff happens outside on the street.”

Today Toven works in the world of the “burners,” who burn through cans of spray paint putting their signatures on buildings; “writers,” who are recognized as accomplished graffiti craftsmen and “toys,” wannabes still trying to master the game. 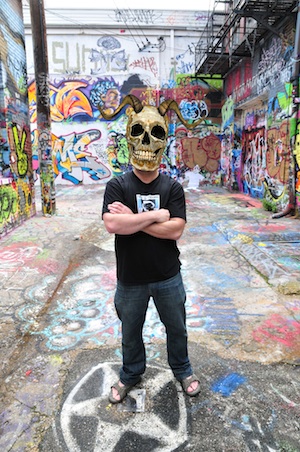 Self portrait with skull, another Brew photo manipulated by Toven

From the start, he preferred making images to signing his name. Years ago, he says, he would spend five or six hours hand drawing in the dark in some of the city’s most desolate neighborhoods.

Later, he added: “But that’s the nature of street art. I always know I take a chance when I paste a one of a kind, hand painted piece that may be up for long.”

Toven hasn’t just wheat pasted portraits of literary renegades like Poe, Burroughs, the poet Charles Bukowski on Baltimore’s walls. He’s also added some wildlife to the streets, including a poster of a bull elephant based on the creature that dominates the entrance to the American Museum of Natural History in Washington. 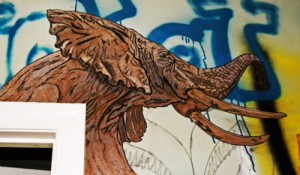 Elephant, drawn from exhibit at American Museum of Natural History

The city is hosting Open Walls Baltimore, a street mural project featuring works by artists around the world. “I think that was a great idea, and some of the pieces are amazing,” says Toven, who is not part of the project.

Like some other Baltimore artists, though, Toven thinks that the project doesn’t recognize some of the talent already here in the city. “I do think they should have integrated some more artists from Baltimore,” Toven says.

One of the biggest concentrations of Toven’s works is Graffiti Alley, just north of West North Avenue, off Howard, behind the Load of Fun performance space and gallery at 120 West North Avenue. 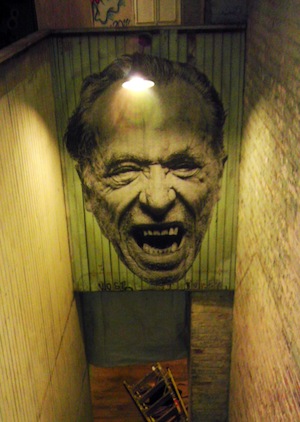 Luis Rosenfeld, the owner of Graffiti Warehouse, at 128 West North Avenue, which also abuts Graffiti Alley says he plans to exhibit many of Tovens’ works. Rosenfeld, a photographer, is currently turning the old industrial building into an indoor gallery for street art. He and Toven have been sharing techniques on creating poster-sized works.

Meanwhile, Toven plans to exhibit some of his works at Artomatic, an art and music festival in Arlington, Va., across the river from Washington, from May 18 to June 23. For more information, see www.artomatic.org.

More high-resolution images of Tovens’ works can be found at his website.