Workers who clean the toilets, change the beds, bus the tables and haul the trash at the Hyatt Regency Baltimore marched into the hotel’s executive office suite yesterday to confront their bosses with a stern message:

Management, they charged, is harassing employees for talking to union organizers about pay, working conditions and the outsourcing of jobs at the Inner Harbor hotel. Workers who have formed a committee to talk about possibly unionizing are, they say, being written up and punished for minor infractions.

“May I give you this?” asked Baltimore City Councilwoman Mary Pat Clarke, attempting to hand over a copy of the unfair labor practices charge the workers have filed with the National Labor Relations Board.

No, send it by mail, said Aaron McDougle, rooms executive for the Hyatt Baltimore, rebuffing Clarke and the group of 25 people she joined for a surprise visit to the Hyatt. 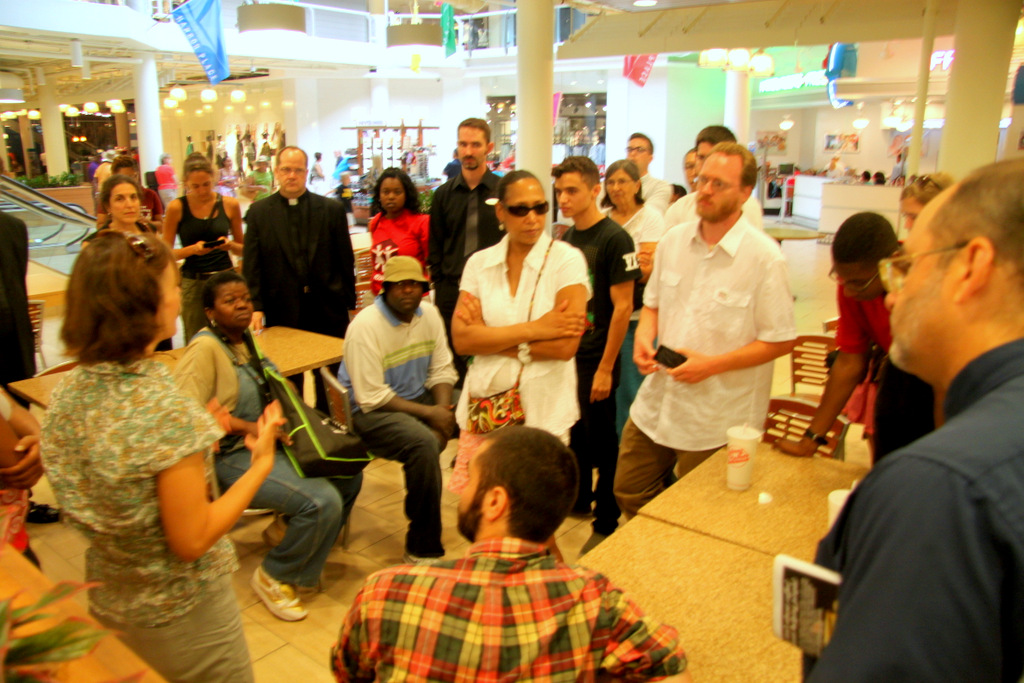 Employees gather in the Light Street Pavilion before walking to the Hyatt. (Photo by Fern Shen)

“Fine,” Clarke said coolly. “The NAACP and I, we’ll find Ms. Penny Pritzker and deliver it to her.”

It was one of several tense moments during the group’s encounter with management in a small Hyatt conference room, with hotel security director Andre Street at several points ordering participants and a reporter to stop taking pictures and videoing – or he would call police and have them arrested. (Two city police officers did ultimately show up.)

Clarke’s mention of Pritzker was a reference to the Chicago heiress and 2008 Obama supporter whose family owns the Hyatt hotel chain. (Pritzker is being sidelined by the president’s re-election campaign these days, The New York Times recently reported, possibly because of the Hyatt chain’s frequent clashes with another source of Obama’s support, labor unions.)

Yesterday’s action in Baltimore was part of a week of activities planned across the country by Unite Here, which is calling for a world-wide boycott of the Chicago-based hotel chain. Unite Here represents housekeepers, bell staff, restaurant workers and others.

“It is unacceptable in 2012 that women endure debilitating injuries as a result of the work they do cleaning rooms,” Unite Here president John Wilhelm said Monday. 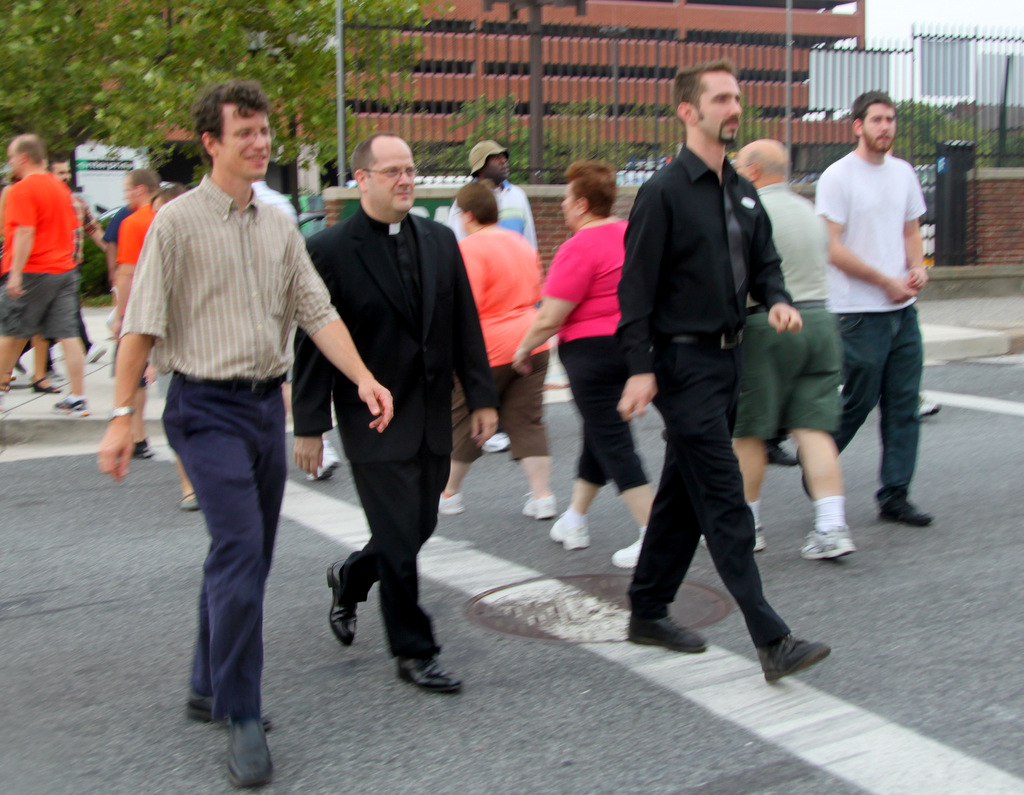 He was part of a Washington, D.C., news conference the group held that included leaders from the AFL-CIO, the National Organization of Women, the NFL Players Association, the National Gay and Lesbian Task Force and others.

Unite Here said it plans a week of demonstrations at Hyatt hotels in 20 cities, including Chicago, Los Angeles, Honolulu, San Francisco and Boston.

The union is not, at this point, calling for a boycott of the Hyatt in Baltimore, but asking rather for the management to remain “neutral” and allow employees to talk to Unite Here about their options, said organizer Tracy Lingo. 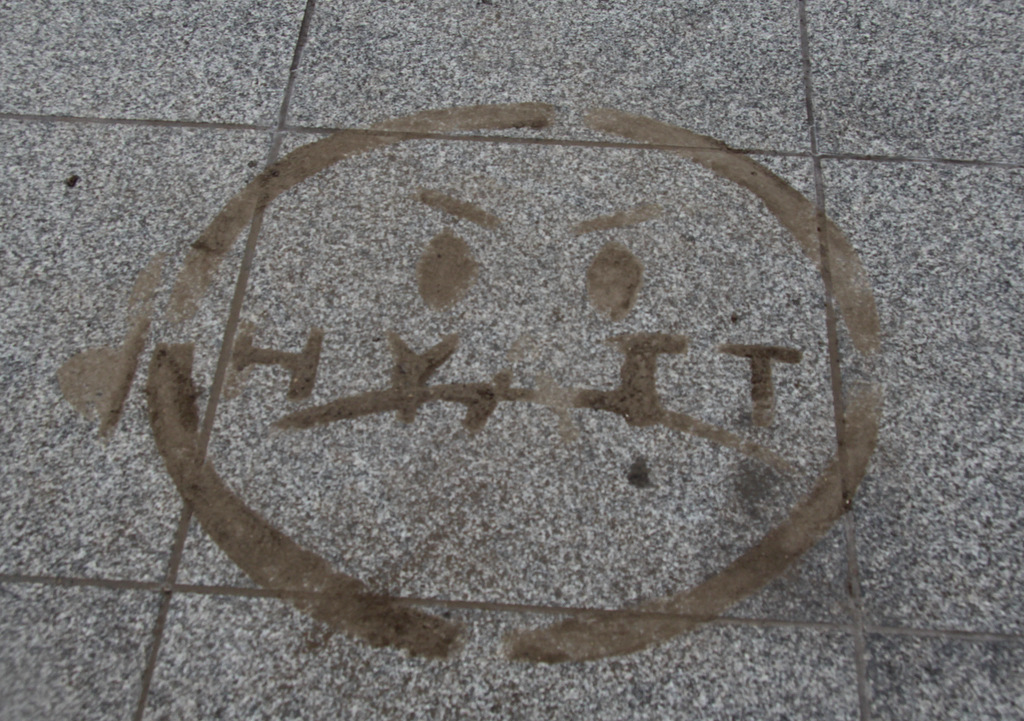 “But the company has brought people in for questioning, posted security guards next to people having discussions” about working conditions and “written people up for minor infractions,” Lingo said.

Hyatt Hotels Corp. has responded to the union’s national campaign with a full-page ad in The Washington Post and press statements saying the company “maintains an outstanding safety record, provides industry-leading wage and benefits packages and is a recognized leader in promoting a diverse workforce.” They accuse Unite Here of launching the labor dispute as “an attempt to boost membership.”

Asked by a Brew reporter to comment on the Baltimore employees’ charges – including the harassment allegations in its NLRB complaint – the local Hyatt management responded over the phone that they would. So far, they have not called back.
In an emailed statement received today from Gail Smith-Howard, general manager of the Hyatt Regency Baltimore, the company addressed the issue of temp workers:

“On an as needed basis, and like virtually all hotel management companies, Hyatt uses staffing companies to perform certain functions so we can respond effectively to fluctuations in business levels and operate efficiently,” the statement said. “In all cases, we take any decision to engage staffing companies very seriously.” Read the full statement here.

Increasing Use of Temps

Hyatt workers, however, many of them still wearing their employee name tags, were eager to tell their stories. They said the hotel has been steadily slashing the size of the full-time staff and replacing them with temp agency employees who are poorly-paid and do have not good benefits packages.

Workers are being asked to cover for each other and multi-task, making for stressful and dangerous working conditions, several said.

“You’ve got one person doing three people’s jobs,” said Michael Jones who, as a steward, washes dishes and dumps trash in the restaurant and the kitchen. He said in the ten years he has worked there, his department has gone from 32 full timers to just six or seven. 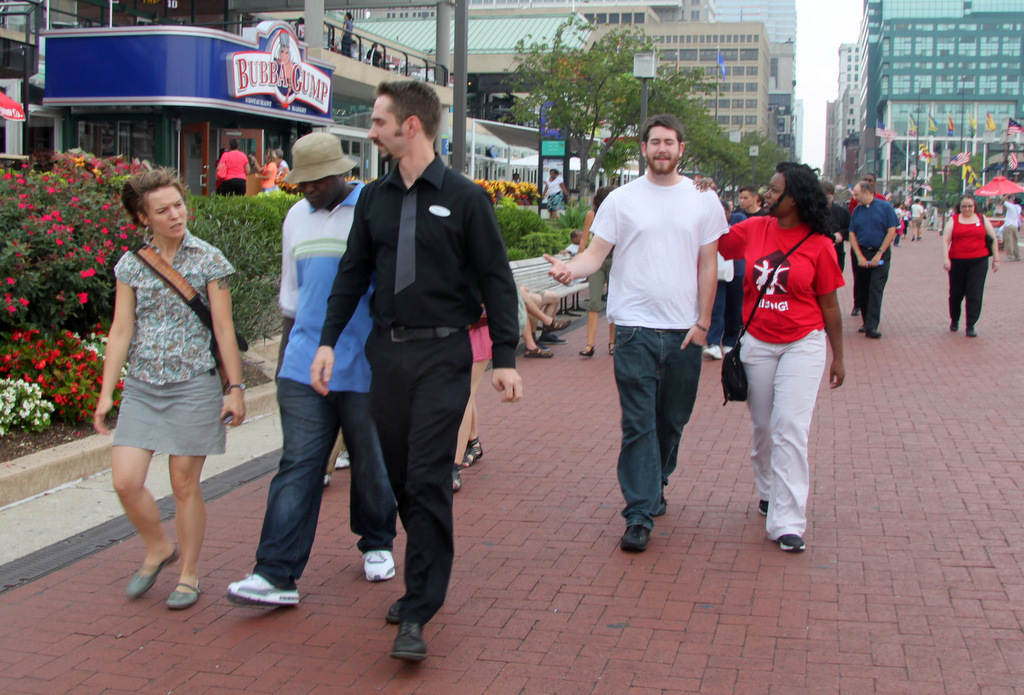 A.C. Castro described four recent injuries in the restaurant including his own tendonitis and the severe facial burns a cook received when someone put fry oil in a pot usually used to steam vegetables and the hot oil exploded.

“I’m one of the people in the [NLRB] complaint,” said Castro, a $6.55-per-hour restaurant room service worker who said he was “written up because I didn’t put my name on a money drop box.”

Castro, who has worked at the hotel for a little over a year, said that as temp hiring has risen at the Hyatt, the number of full-time employees has gone from 400 to 130, with the in-house housekeeping staff dropping from 50 to 9.

“It’s not healthy for us and it’s not healthy for the city for them to make one person do three jobs,” said Regena Davis, 22, an on-call banquet server who makes $4.50-per-hour plus tips. (She also works a full-time job as a dietary aide at Kennedy Kreiger.) “You see all the boarded-up houses on the street all the people out of work. Those could be job opportunities for people.”

Clarke: Hyatt Reneged on a Promise

Charlotte Knox, a $13.20-per-hour housekeeping staffer who has worked at the Hyatt since 1984, said she participated in the action to be an example to others: “don’t let them do you like they did me.”

The 62-year-old Knox, who is going to have hip replacement surgery soon, said paying $72 for health insurance every two weeks leaves her “lucky to take home $200 every two weeks.”

“I don’t have enough money to take care of myself.” 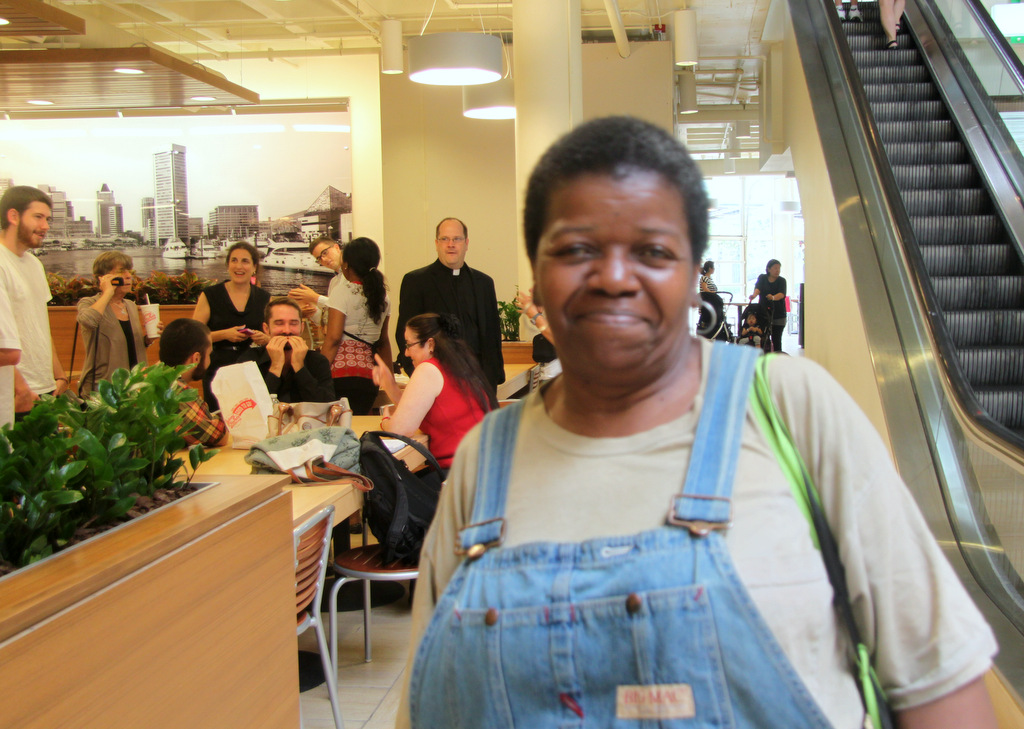 Clarke told a story too. She recalled that the Hyatt, which opened in 1981, received a $10 million federal UDAG grant.

The local AFL-CIO chief at the time, Tom Bradley, “met with Hyatt officials and got an agreement that there would be no interference, there would be fair and just circumstances to allow elections whether to unionize or not,” Clarke recalled.

“He made that promise to his workers all across the metropolitan area. And we all supported that hotel,” she said. “And then the Hyatt did not maintain its neutrality. . . This organization, the Hyatt, reneged.”