Hundreds gathered last night at Canton’s O’Donnell Square in front of Nacho Mama’s and Mama’s on the Half Shell to remember owner Patrick “Scunny” McCusker, who was bicycling  in Ocean City Friday on Coastal Highway when he was struck and killed by a bus.

Many held posters of a sad “Mr. Boh” character, shedding a tear from his iconic single eye for the man whose bar and restaurant prominently served the traditional Baltimore beer on tap and who helped make National Bohemian’s mascot a funky symbol of the city.

At about 8 p.m., the crowd packing the square held up their cans of Boh in memory of the restaurateur: “To Scunny!”

Greg Marsh, who lead the toast, was later asked how he came to be good friends with McCusker. Answering, Marsh was nearly overcome with emotion.

“It was 1994. I was looking for a house and wound up in Nacho Mama’s. It was really the only place you could go back then,” Marsh said. “Scunny started talking to me. He just came over and started talking to me. I met my best friend on the planet that day, he’s here with me tonight. And I became friends with Scunny.” 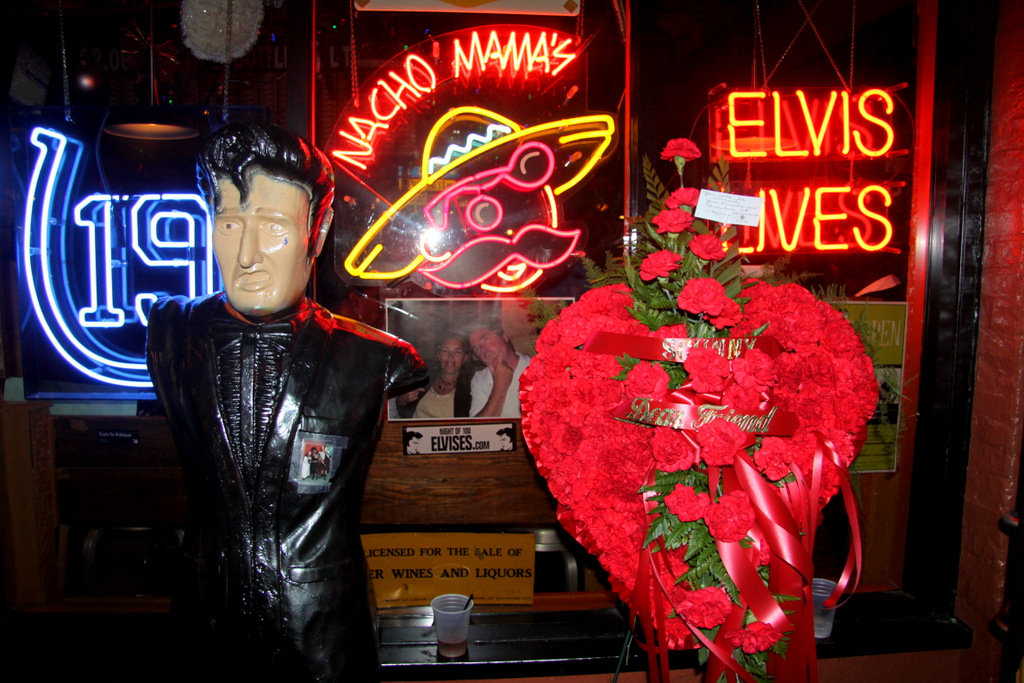 “You will be missed,” read the card on flowers left for Nacho Mama’s owner Patrick “Scunny” McCusker. (Photo by Louie Krauss)

Looking out at the lively crowd at the center of the busy cluster of pubs and eateries, Marsh said it was a fitting place to pay tribute to his friend.

“I’d say Scunny is responsible for the renaissance in Canton,” he said. “You will be missed,” said the card on a large heart-shaped bouquet of red roses left by friends and co-workers outside Nacho Mama’s, along with many others. Many nearby bars and restaurants also displayed the tearful Mr. Boh sign and personal goodbye messages in their windows.

Members of the Nacho Mama’s softball team were part of the crowd remembering McCusker last night. (Photo by Louie Krauss)

McCusker sponsored a softball team for Nacho Mama’s, but the team’s manager Jeff Bleach said McCusker was “more like a friend than a sponsor.”

“Every Wednesday we’d hang out there with him,” Bleach said, one of several team members who showed up in the square in their orange-and-navy uniforms.

“We’re really going to miss him. He was the heart of this place,” said his wife, Sarah Bleach, pointing out that while they live in Bel Air now, they always come back. “This was our ‘Cheers.’”

The 49-year-old McCusker is survived by his wife Jacqueline and two children, Darby, 13, and Finn, 12.

“It Could Have Been Us”

Along with McCusker’s friends and customers, several bicycle advocates showed up to pay their respects to a fellow cyclist and to promote safer driving and the construction of more bike-friendly roads.

Chris Merriam, of BikeMore, spoke about the problems that streets solely intended for cars pose for bike riders and pedestrians.

“I know that road he was on,” Merriam. “It’s designed to be almost like an interstate. The lights are timed so cars can easily get to 60 mph.” 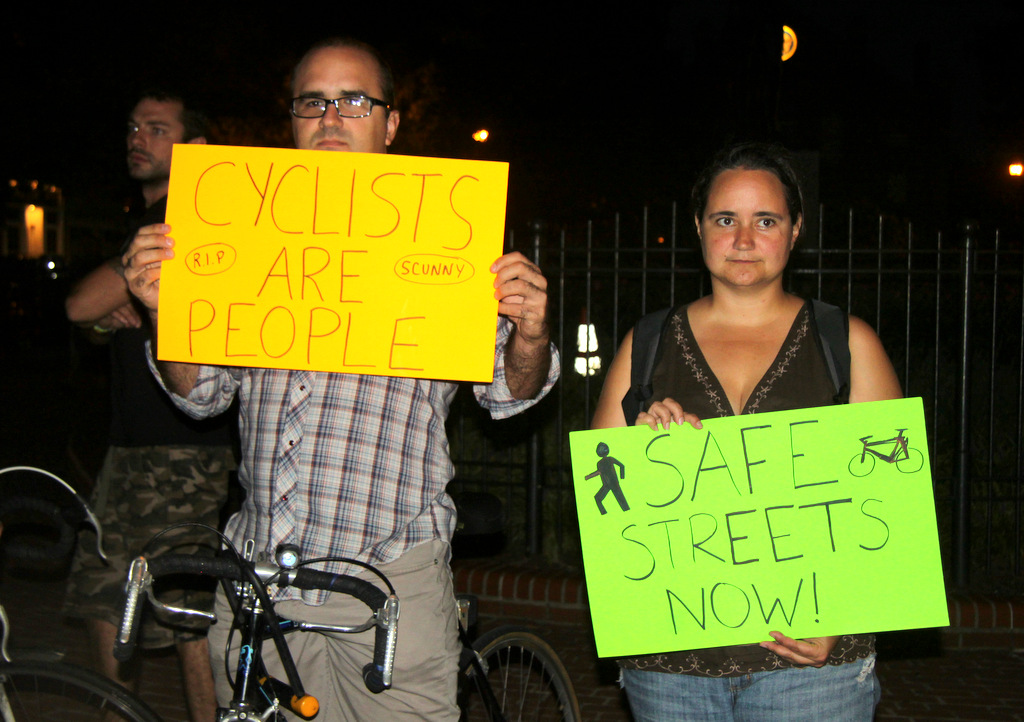 Chris Merriam, Elswyth Strassberger and others said safer street design could prevent crashes like the one that killed McCusker. (Photo by Louie Krauss)

Elswyth Strassberger, another Baltimore cycling advocate, said the many pedestrian deaths on the Coastal Highway are evidence of how dangerous it is.

This year a 22-year-old man and a 15-year-old girl died in vehicle-pedestrian accidents.

Merriam called on government planners to do more to safeguard cyclists and pedestrians.

“There’s a connection between this man dying and the design of the roads,” he said.

“It’s not just, ‘Oh, we wish cars were more respectful of bicyclists.’ There is something we can do about it.”

Bringing New Life to a Neighborhood

McCusker opened Nacho Mama’s on January 8, 1994, the anniversary of Elvis’s birthday. A fan of Elvis, he decorated Nacho Mama’s with Elvis memorabilia and even wore an Elvis costume to the Ravens Superbowl game in Tampa in 2001.

Nacho Mama’s was one of the first successful restaurants in the revived O’Donnell Square, and many attribute his success to the development of the neighborhood as a hub for restaurants and bars. Later in 2003, McCusker opened Mama’s on the Half Shell, a seafood restaurant that had similar success and popularity.

“Canton wouldn’t be what it is today without small-business pioneers like Scunny,” Rawlings-Blake said. “It is impossible to quantify his positive contributions to the city of Baltimore. Scunny’s restaurants not only offered outstanding food in an amazing atmosphere but also a sense of community. Patrick was also my friend.”

Among McCusker’s charitable gestures was his longtime work with the Believe in Tomorrow Foundation, which provides housing for seriously ill children and their families. McCusker, who donated thousands of meals to the foundation, kayaked hundreds of miles in the Chesapeake Bay to raise money for the group.