On the heels of the failed “Hyatt at City Center” project, the Baltimore Development Corp. today reviewed a more modest effort by a Philadelphia developer to convert the former USF&G building and other city-owned properties into residential units.

The proposal by the PMC Property Group to turn five long-vacant buildings on South Calvert St. and an adjoining building on Water St. into 140 market-rate apartments was placed before the BDC board at its monthly meeting.

The plan succeeds Mark Sapperstein’s 2009 proposal to tear down the buildings and erect a pair of Hyatt hotels and a parking garage on the site.

The board promptly went into closed session to discuss a financing plan proposed by PMC. Last month, The Brew reported of how the board goes about closing its public sessions under the Maryland Open Meetings Act.

The closed meeting, lasting 49 minutes, concluded with a decision by the board to recommend a course of action to Mayor Stephanie Rawlings-Blake, said BDC’s interim president Kimberly Clark.

Clark would not disclose the board’s recommendation, citing an exemption under the Open Meetings Act allowing financial material to be held confidential.

Asked if PMC had requested a PILOT or other tax incentives from the city, Clark said tax breaks were not part of today’s discussion. She indicated that the sales price of the properties was a topic.

PMC specializes in renovating industrial buildings into upscale residential units. In Baltimore, it has rehabbed the historic Abell Building on Eutaw Street and the former National Enamel & Stamping factory in South Baltimore. 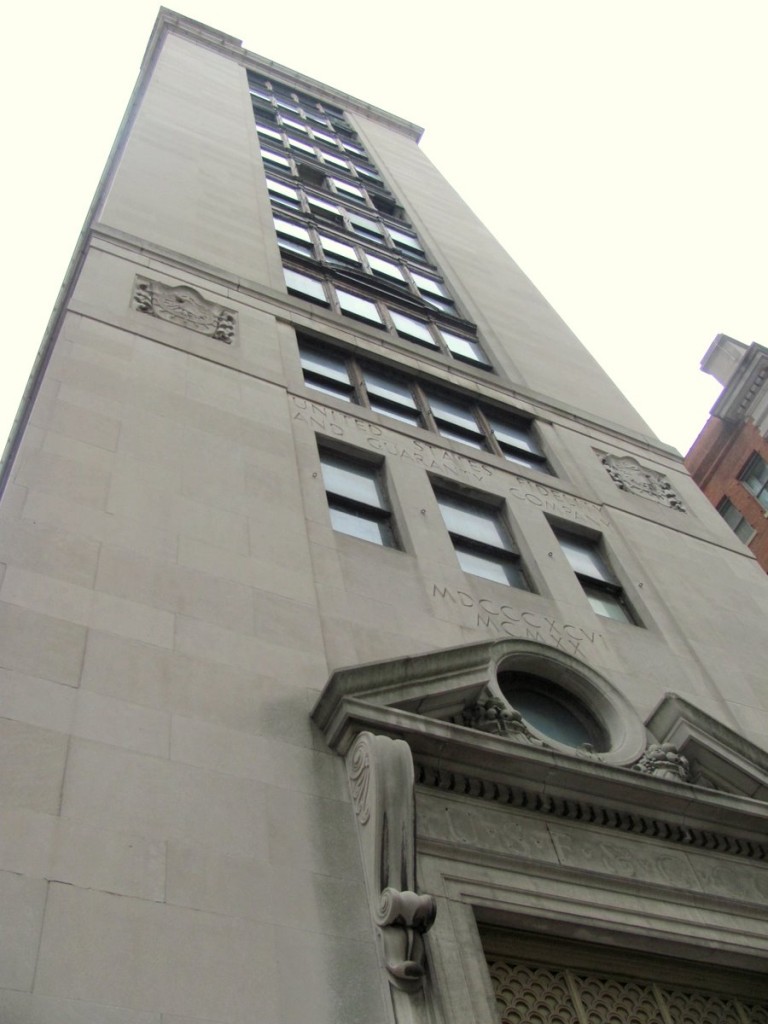 The limestone-clad USF&G building has mostly laid vacant since it was acquired by the city in 1995. (Photo by Mark Reutter)

Details of the group’s latest plan was not offered at the public session, except that the developer wants to convert ground-level space to 30,000 square feet of retail.

Between 2002 and 2005, the city spent another $1,965,000 to acquire four buildings at 30-36 South Calvert Street as part of its plan to convert the northwest corner of Calvert and Lombard streets into a major hotel complex.

In February 2009, the Board of Estimates entered into a land disposition agreement with developers Mark Sapperstein, Benjamin Greenwald and Joseph Haskins to build the Hyatt at City Center.

The 450,000-square-foot complex would include Hyatt Place, Hyatt Summerfield Suites, a 300-space parking garage, and residential, commercial and retail space.

The BDC said that the project would generate 450 construction jobs and pay about $60 million in city taxes over a 20-year period.

Almost immediately, however, the project fell victim to the recession, and the developers failed to pay the $4.5 million purchase price for the land.

PMC wants to settle with the city as soon as possible and begin reconstruction next spring, according to BDC development officer Kerry DeVilbiss.