That’s one of the unpublicized details of the casino agreement struck yesterday between the Rawlings-Blake administration and investors led by Caesars Entertainment Corp.

Read through the 300-odd contract and exhibit pages, and you’ll find that Caesars will be picking up some nice winnings, the very best of which comes at the expense of Westport and other impoverished communities that surround the proposed Harrah’s Baltimore on Russell Street.

Sound familiar? We’ve been documenting how the city showers upscale projects with tax breaks. Not sharing the bounty with Caesars would seem to be downright un-Baltimore.

Caesars won’t get the deluxe tax break of Harbor Point, expected to reap at least $100 million in “EZ” (Enterprise Zone) credits over time, or the $20-million-plus in PILOT (payments in lieu of taxes) for the Lexington Street Superblock project, under final consideration by the City Council.

The city said yesterday that the casino will produce at least $11 million in yearly revenues, allowing for a small break in the property tax rate beginning in 2014.

But the world’s largest casino company won’t do poorly when it opens a 3,750-terminal video gambling emporium thanks to some chips left on the table by City Hall.

First is the purchase price for city land for the casino’s 4,000-space parking garage.

The headline price is $5.9 million. But CBAC Gaming, majority-owned by Caesars, will only pay $1.2 million at settlement later this year. The remaining $4.7 million is due in late 2017 in a lump sum, without interest. 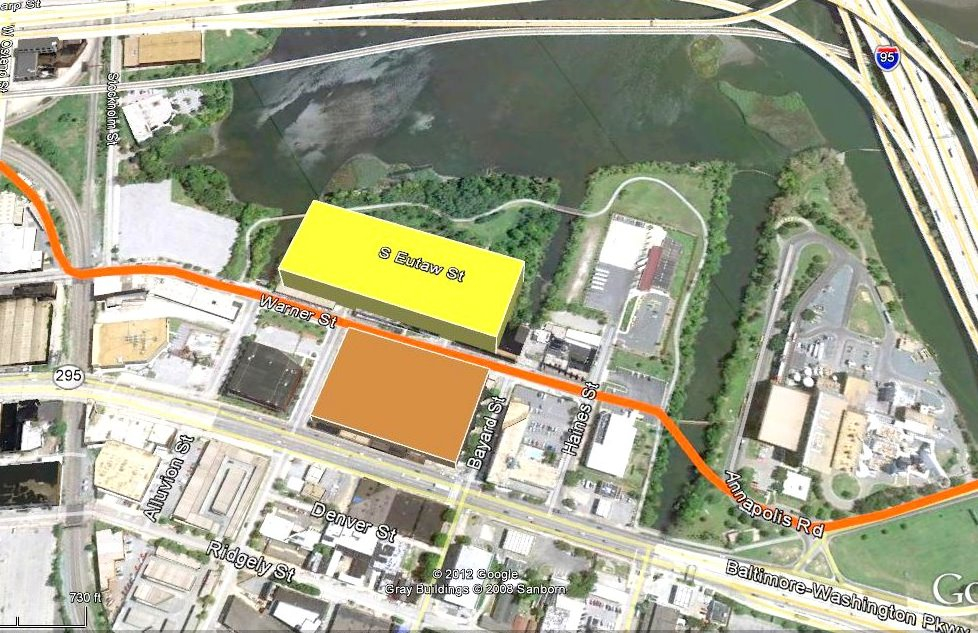 The brown box on Russell Street (I-295) will be the site of the casino, while a 4,000-car garage will be located in garage (yellow box). Under the latest plan, Warner Street will be permanently closed between the two structures.

By that time, the purchase price will be effectively offset by the city’s diversion of $6 million in “local impact grants” to CBAC. And here’s where the contract gets interesting.

In order to compensate communities for the problems caused by casinos, such as traffic jams and crime, and to improve “economic and community development, including housing,” the Maryland legislature set aside local impact grants.

Coming out of the state’s portion of casino earnings, the grants are to be distributed to communities through “local development councils” appointed by, in Baltimore’s case, the mayor with the concurrence of the state legislators in the affected district.

The General Assembly enacted an elaborate methodology by which the councils were to handle the grant awards. In Cecil County, for example, non-profits are awarded grants on a competitive points system. In Prince George’s County, the funds can be used for community projects within 10 miles of the Rosecroft Raceway.

But in Baltimore, the Rawlings-Blake administration swept aside this process and will instead let CBAC use the first three years of impact grants – totaling $6 million – for infrastructure costs in the immediate proximity of the casino.

Questioned yesterday, community leaders near the casino said they had no idea that the impact grants would be earmarked to Caesars.

“No, I haven’t heard a thing,” said Ruth Sherrill, longtime president of the Westport Community Association. Betty Bland-Thomas, formerly of the Sharp-Leadenhall Planning Council, also said she was unaware of the plans for the impact funds.

The group was chaired by former State Senator George Della and included representatives from Westport, Sharp-Leadenhall, Pigtown, Federal Hill and other communities near the casino.

This committee has not met in over two years, according to James Alston, the representative from Westport.

Alston said he recently contacted a member of Mayor Rawlings-Blake’s office about the status of the council. “I told her I was still interested in remaining on the committee, but I was told the committee is on hold,” Alston said yesterday.

Told of the diversion of impact funds to Caesars, Alston said, “This is bad. There was no precedent for thinking that the funds would be used by the developer. This was to go to the communities. Absolutely.”

No Word from Mayor’s Office

A year ago, Rawlings-Blake indicated that she planned to appoint new members to the council. The mayor’s press office did not respond to questions by The Brew seeking the current status of the council.

Yesterday’s contract stipulates that CBAC would be given three years worth of impact funds to reimburse the developer for “qualified expenses . . . related to the construction of the VLT [gambling] facility and the garage.”

The contract calls on the development council to approve expenditures submitted by the developer, and further states that if the city “fails to pay developer any grant funds pursuant to this section . . . the developer may offset the payment of any rent due and payable [to the city] by an amount equal to the grant funds otherwise payable to developer.”

In other words, the $6 million is locked up to Caesars, even if the city changes its mind – or the development council balks at the payments.

Reached yesterday, Della said the setup was a violation of the law. He said the development councils were established to advise the city on the use of the funds – not to rubber-stamp bills submitted by the developer.

During the period he chaired the council, Della said major strides were made in developing traffic plans that would lessen congestion and make possible access from Russell Street ( I-295) to South Baltimore during Ravens football games.

Under Rawlings-Blake, the review of casino plans is now in the hands of the Urban Design and Architectural Review Panel (UDARP), a panel of architects initially critical of Caesars’ plan for a gargantuan 4,000-space parking garage.

At a meeting last week, the panel muted its criticism of the garage and expressed approval of the developer’s plan to permanently close Warner Street between Bayard and Worcester, which would impact I-295 traffic headed for South Baltimore.

Under yesterday’s agreement approved by the Board of Estimates (Mayor Rawlings-Blake and her two appointees City Solicitor George Nilson and Public Works Director Alfred Foxx voting “yes,” City Comptroller Joan Pratt voting “no,” and City Council President Jack Young not in attendance), the Baltimore Development Corp. is in charge of reviewing the casino’s final design and construction plans.

Community groups – and the local development council – would have no role in this process.