Couched in terms of long-term financial necessity, Mayor Stephanie Rawlings-Blake today called for major changes in the way city employees are paid health benefits, pensions and – in the case of firefighters – the number of hours they work.

“Baltimore’s firefighters are the best in America, but the current 42-hour shift schedule is outdated and inefficient,” Rawlings-Blake said, noting that fire personnel work an average of 52 hours in a majority of large U.S. cities.

Her proposal was immediately characterized as a de-facto wage cut by Michael Campbell, president of Fire Officers Local 964.

“The city workweek for police and everyone else is 40 hours,” Campbell said after the speech. He added that Baltimore County follows the same 42-hour workweek as the city – and has no plans to lengthen firefighter hours.

Adding 10 hours to the department’s workweek has been a major goal of Chief Clack, whose contract was renewed last July after he closed two fire companies.

She called on rank-and-file workers to pay into the city’s pension plans, with a 401(k)-style retirement plan to be established for new civilian hires and a “hybrid” defined contribution/defined pension plan for recruits in the fire and police departments.

The mayor said some of the savings from these reforms could be used to increase the base salary of city employees, which lag behind other jurisdictions.

The mayor also proposed a “users  fee” for the collection of garage, recycling and other waste from homes and businesses.

The collection – and fee structure – would be handled by a quasi-public “solid waste enterprise” affiliated with the Department of Public Works, according to mayoral spokesman Ian Brennan.

Brennan said the plan would spread the burden of trash collection to apartment dwellers and non-profit organizations that currently don’t pay directly for pickups through property taxes. (Many businesses and non-profits pay private haulers to collect their trash.)

Details of the plan – such as the yearly fees to homeowners – were not available and are still being worked out by administration officials.

Charging for trash collection has become popular in Maryland, with annual users fees ranging from $298 in Anne Arundel County to $369 in Montgomery County.

Rawlings-Blake pledged today to use the collection fee to lower the city’s property tax rate. 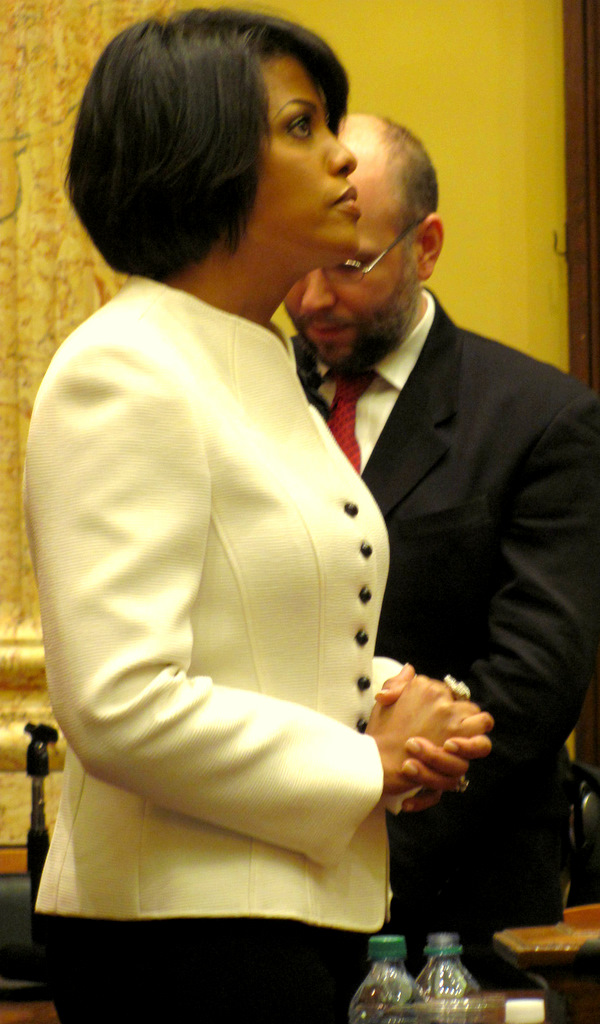 The mayor listens to vigorous applause after her speech from the City Council as well as cabinet members in the audience. (Photo by Mark Reutter)

Without elaboration, she said she hoped to cut property taxes for homeowners “by nearly 50 cents” over the next 10 years.

A trash fee was cited as a way to reduce long-term municipal costs by PFM Group, who were hired as $460,000-a-year financial consultants to the administration, and whose pessimistic 10-year fiscal forecast was released by the mayor last week.

The mayor said that she would be using PFM’s  forecast to guide her in confronting financial challenges facing the city over the next decade.

The forecast predicts that the city would run a cumulative deficit of $750 million by 2022 (based on the current level of services) due to flat property tax revenues and rising employee pension and health costs.

Today’s speech by the mayor to the City Council – a knockoff of the State of the Union address to be delivered to Congress tomorrow by the president – included many laudatory appraisals of her performance in office.

“Over the last three years, we have achieved more results toward meeting the fundamental challenges that caused Baltimore’s decline and impeded our ability to cement a turnaround,” she said, citing reductions in violent crimes, better schools and more neighborhood investment.

“Population loss is slowing to a near halt, and many neighborhoods are experiencing new growth,” she told the Council, pronouncing her “Vacants to Value” housing program a big success.

Regarding her style of administration, the mayor observed, “Since taking office, I’ve always pledged to talk straight and never sugarcoat our problems. Truth is the first step of any real solution. . . Believe me, I do this with complete sincerity and humility. I only want to change Baltimore for the better.”

The speech was also notable for the issues it skirted around.

One was the tax breaks given by her administration to waterfront developments and the long-stalled downtown Superblock. The mayor did not describe the tax breaks except to say, “We can better align and target economic development tax incentives to maximize their impact and ensure positive return on city subsidies.”

The mayor also did not address the issue of auditing city agencies – many of which haven’t been reviewed by outside accountants in decades. Last summer, her allies torpedoed a plan that called on yearly audits. The bill that passed the City Council calls for audits of some agencies every fourth year.

The speech touched only briefly on public safety and policing – and made no mention of calls for more sensitive policing in low-income neighborhoods or the spate of cash settlements made by the city to terminate police brutality cases.

Rebuilding city schools – a hot topic in last year’s State of the City speech – was also only briefly mentioned today.

Finally, the mayor sidestepped the question of whether more neighborhood rec centers will be closed this year.

Instead she expressed faith that the city would be able to increase its capital budget in order to rebuild 10 of the city’s 55 rec facilities over the next decade.