Along with the crocuses and snowbells that pop up in February when winter takes a break and sun warms your Baltimore lawn, you may find something edible – onion grass.

You could complain that your pristine lawn is being blemished with this scraggly interloper (Allium schoenoprasum) or you could count yourself lucky – its aromatic green shoots and white, below-ground bulbs can be used as you would scallions or shallots.

Also known as wild chive, onion grass sprouts up tall on lawns, medians and parkland everywhere in the Baltimore area about now, holding out until the first mow. 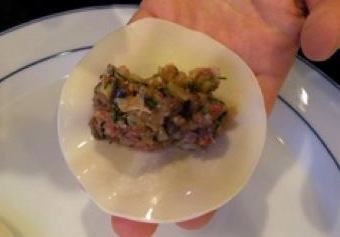 Put about a tablespoon of filling in each dumpling wrapper. (Photo by Kelly Burke)

The quintessential edible invasive species, onion grasses can be dug up and moved over to your culinary herb garden, where they’ll offer a finer version of the thicker garden chive.

I was inspired to work them into some homemade Chinese dumplings, a classic dish I prepared recently for the Lunar New Year.

The Year of the Snake kicked off a week ago Sunday (on February 10th), but Chinese families celebrate it before and afterwards. (I offer this info in case you want to try this dish and need a bit of a theme.)

A handful of the lowly onion grass will work as a nice substitute for scallions in any dumpling recipe, but I recommend the Shrimp-Pork dumpling recipe provided below.

Just a note: beware not to confuse onion grass with any of the other small-bulb plants you might encounter this time of year, such as snowbells, crocuses and miniature lilies. These have a bitter taste.

The distinguishing feature of the onion grass is that it has tall and hollow stalks with tips of irregular height that wilt and curl. And they smell, of course, like onions! By contrast, the comparable stalks of those bulb-based flowers (often found right next to onion grass!) are erect, solid and not the least bit onion-y. 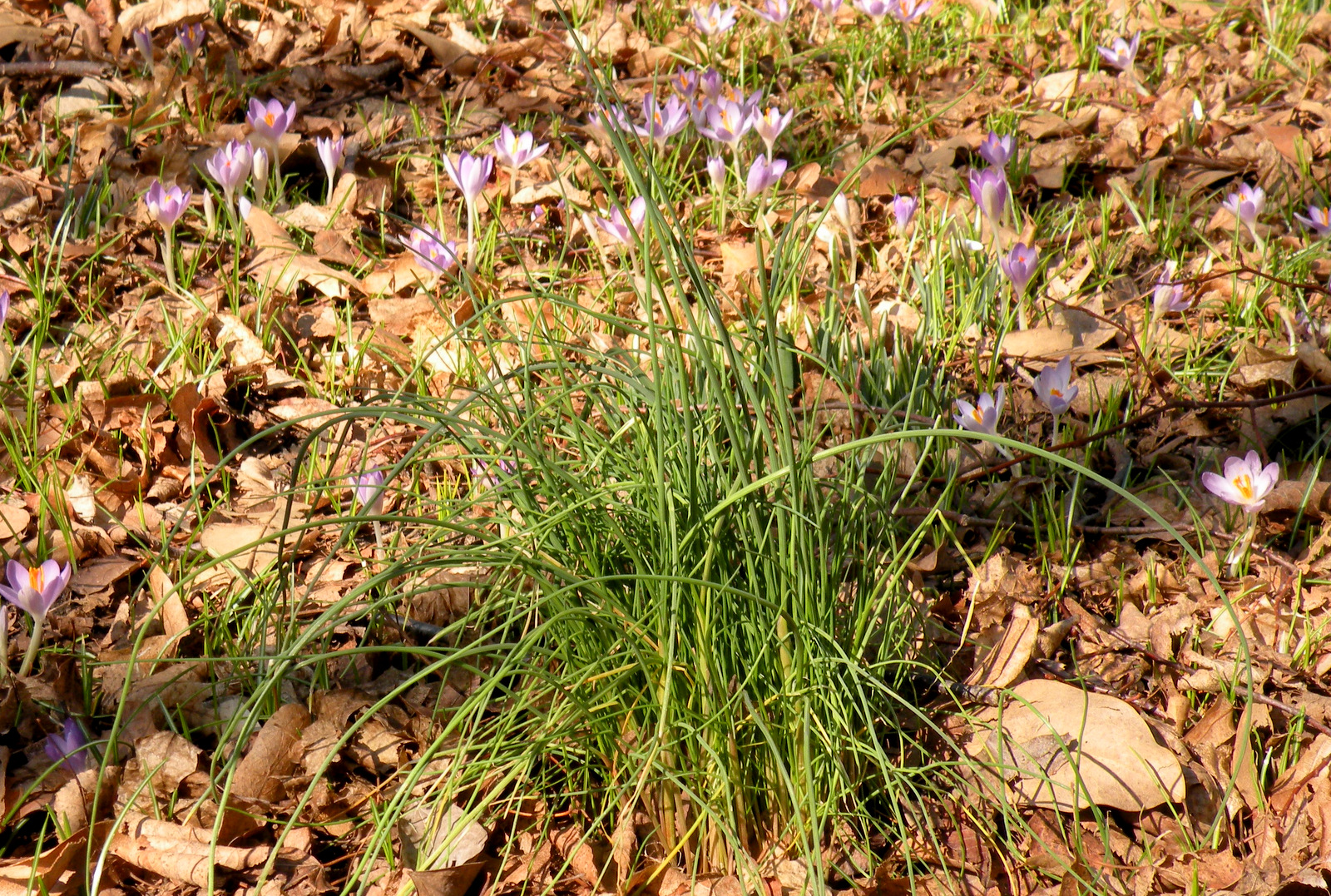 Those crocus plants surrounding the wild chive have white bulbs and green shoots too, but they’re not edible. (Photo by Marta Hanson)

Because dumplings are so delicious, families don’t just make them to celebrate the Lunar New Year.

My colleague’s Chinese mother-in-law, Fong Yueh Kam, recommends, for example, foraging later in the spring for shepherd’s purse (Capsella bursa-pastoris, in Chinese Jicai 薺莱). She likes to add this to her dumpling filling recipe.

Since shepherd’s purse won’t appear until March (lasting to mid-April), I plan to use their arrival as a good excuse to make another batch of dumplings with foraged-filling. Surely there will still be onion grass somewhere in the city to add to the mix.

PREPARATION
1. Wash the shrimp and squeeze out the excess moisture. Chop coarsely. If you can get the dried scallops, once steamed tear them into fine shreds. 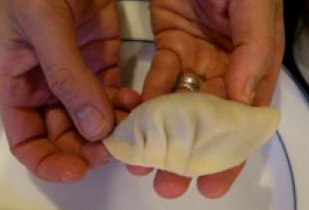 Make creases on the sealed edge. (Photo by Kelly Burke)

2. Mix all the filling ingredients together until well combined and freeze until partially solid.
3. I use pre-made wrappers at this stage and put in just enough filling so that when flipped over into a moon shape the edges can be tightly pinched shut.
4. Place lettuce or cabbage leaves on the base of either the Chinese-style bamboo steamer or European-style collapsible metal steaming tray. This is absolutely necessary, otherwise the dumpling skins will stick and tear when, after they are steamed and you try to take them out. 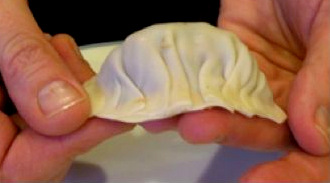 Bend the finished dumpling slightly, to give it a crescent-moon shape. (Photo by Kelly Burke)

5. Steam for at least 10 minutes. The dumpling skins should have lost their dry floury look and become uniformly saturated with steam.
Enjoying eating with both dipping sauces!

Instructions for stuffing and sealing the dumplings.
1. Wet upper ½ of circumference to help seal.
2. Fill with about a Tbsp of filling. 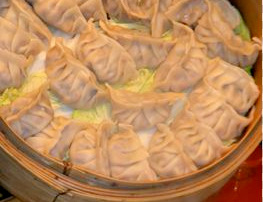 3. Fold over in half and pinch center.
4. Pinch together three consecutive folds on one side.
5. Then pinch three folds on the other side.
6. Pinch along top to secure and slightly curve like a crescent moon.
7. Place on cabbage or lettuce leaves in a steamer. Steam for 10 minutes, or until well cooked. Make sure there is enough water in the pan so you don’t burn them.