Holding a photograph of her son’s bruised and battered face, following an arrest in March, a Providence, Rhode Island woman stood yesterday in a vacant lot in East Baltimore, in the rain.

Hoping to highlight the idea that police brutality is a national problem for America’s poor, Suzette Cook and about 150 other people had assembled at the corner of Montford and Biddle streets.

“If I sit back, the next mother is going to go through this,” said Cook.

She was standing a few feet away from the spot where Baltimore police in September tackled an unarmed local man, Anthony Anderson Sr., following an alleged drug deal. Anderson died and no charges were filed against the officers whose arrest broke eight of Anderson’s ribs and lacerated his spleen.

“My son didn’t have a gun, he didn’t have drugs, and even if he did, no one deserves to be treated like this,” Cook said, noting that the charges against him were simple assault and resisting arrest, misdemeanors.

Police brutality is just one of the issues that brought the crowd together yesterday for The Poor People’s Campaign and March event. 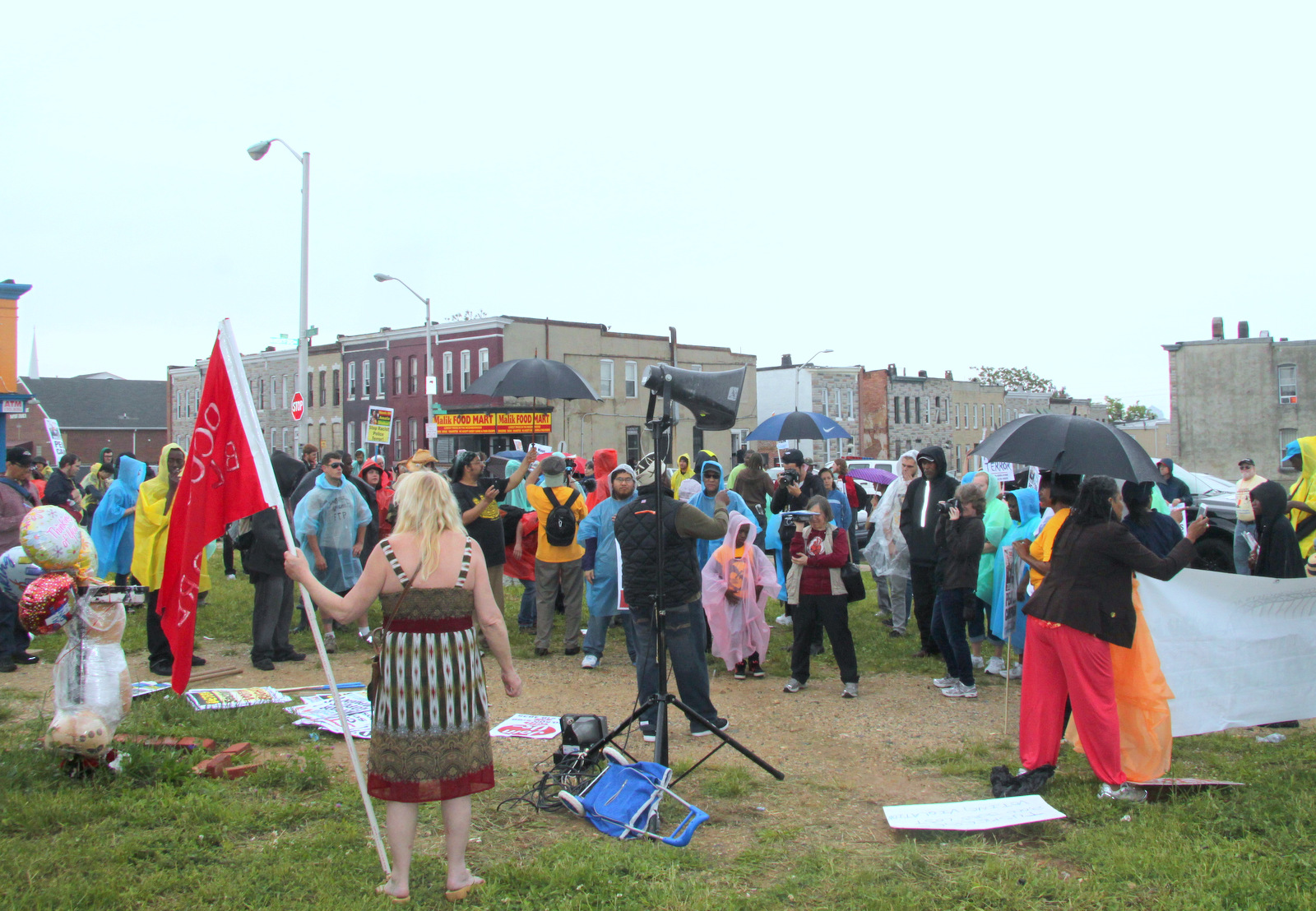 People came from Alabama, Rhode Island and Massachusetts to march with Baltimore activists to D.C. (Photo by Louie Krauss)

The marchers, organized by the local chapter of the Southern Christian Leadership Conference and the Baltimore People’s Power Assembly, were there to kick off a two-day march to Washington to call attention to a host of ills and injustices they say are suffered disproportionately by poor citizens.

“The lack of jobs. The lack of good jobs – jobs with wages and health benefits,” said Don Cash, vice chairman of the national board of the Southern Christian Leadership Conference.

Cash said the middle class has been the focus of the national discussion about the ailing U.S. economy “and poor folk are left out of the discussion.”

“They want to work,” he said, adding that, often “they are working,” but at jobs that leave them poor.

In the Tradition of Dr. King

The march along Route 1 follows the path of the 1968 Poor People’s Campaign organized by Martin Luther King Jr. and the Southern Christian Leadership Conference 45 years ago. Organizers said it also harkens to other historic civil rights actions, like the “Jobs and Freedom March” 50 years ago, in August 1963.

Among the participants in today’s Maryland march were many representatives of local labor unions, postal workers, former steelworkers, Wal-Mart employees and Occupy members and other activists from Maryland, Alabama, Massachusetts and Rhode Island. 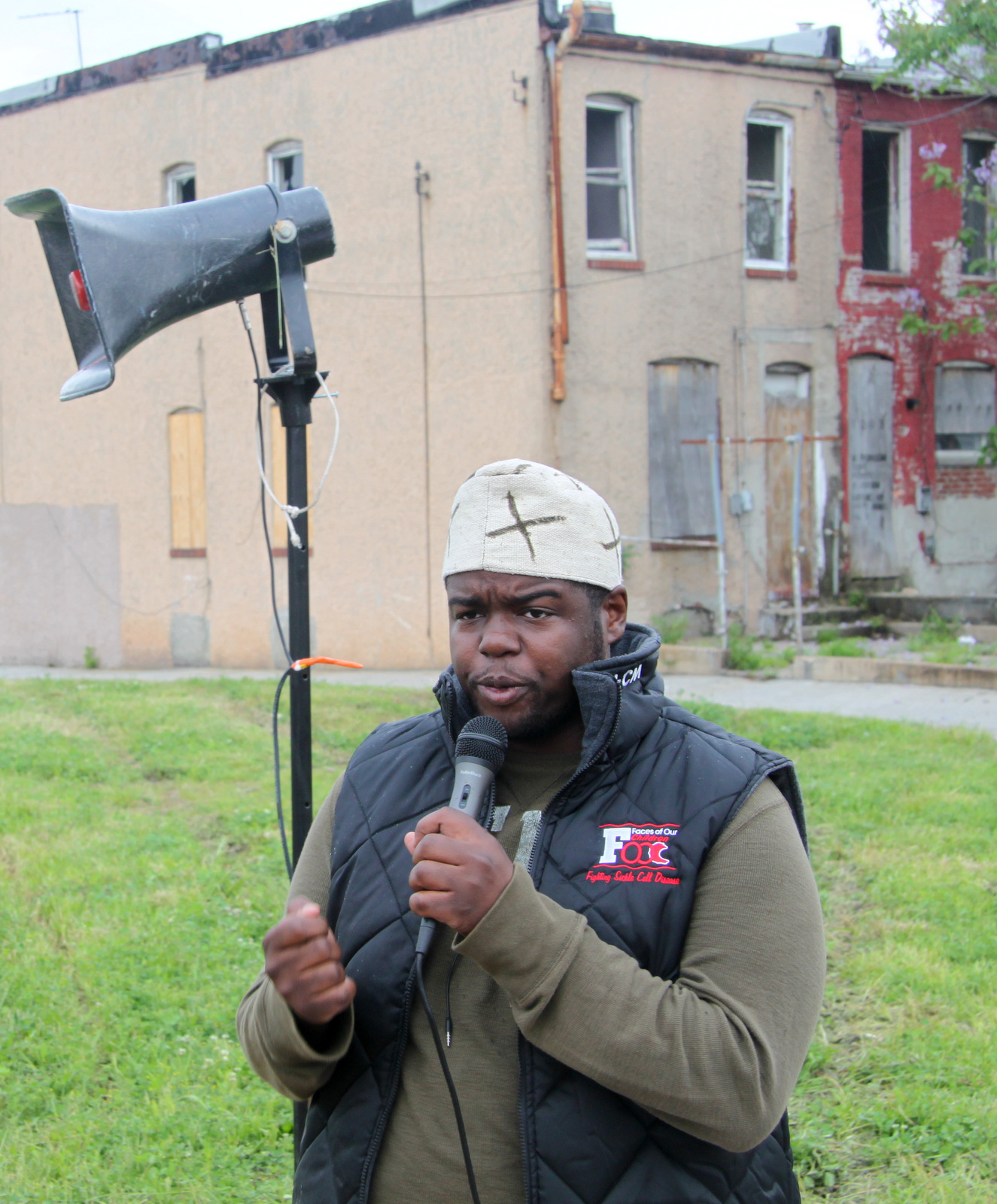 “I’m here to honor the legacy of Dr. King,” said Susan Massad, of Framingham, Mass., pointing to the boarded up and shabby rowhouses that formed the backdrop for the rally.

“We can afford to send drones to strike around the world and we afford to fix up houses for own people?”

Several local residents had much the same message.

“I’m here to support people like my nieces and nephews. When I was growing up, I had a lot of role models,” said Sherelle Ricks, 35, who grew up in Cherry Hill and lives now on Fulton Avenue in Sandtown. “Now it’s drugs everywhere and no role models. I see them closing down rec centers.”

A Coppin State University student, graduating this year with a degree in accounting, Ricks said she joined the rally to send a message: “we’ve got to stop closing schools and rec centers and start uplifting the community.”

Link Between Jail and Poverty

Not everyone gathered for the rally planned to walk the whole 40-plus miles to Washington, but Jayson Bozek did.

“I’ve run a marathon this year but I think this is going to be harder,” said Bozek, who works as a public defender in the Baltimore area.

“Virtually all of my clients are poor,” Bozek said. “If they weren’t poor, they wouldn’t be involved with the justice system.” 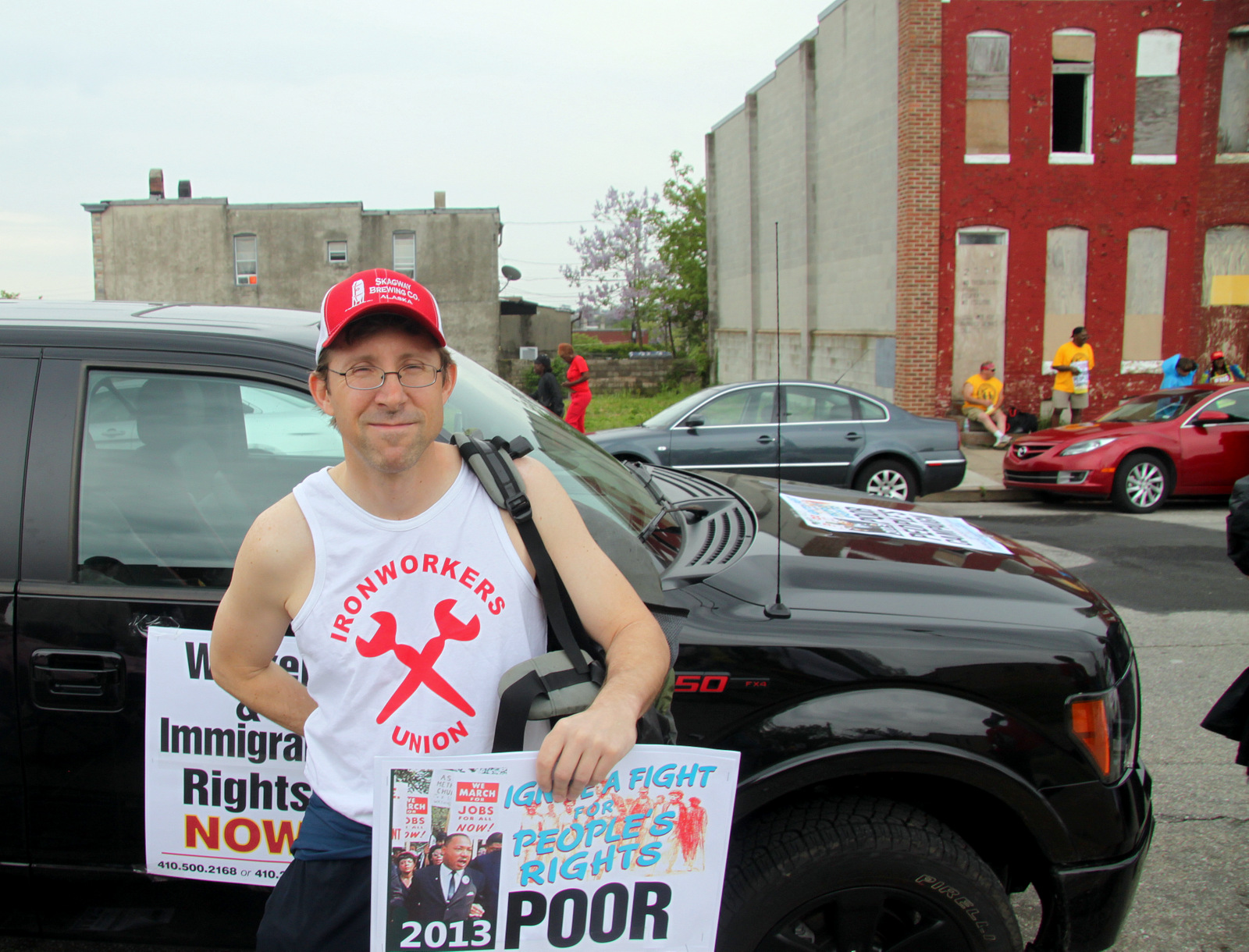 Jayson Bozek, a Baltimore area public defender, said he was walking with his clients in mind. (Photo by Louie Krauss)

“Martin Luther King came to understand this late in his life. He was killed before he could really pursue it,” said Bozek, shouldering his backpack and heading off to listen to the speakers.

Cash, of the SCLC, also thought about the history of efforts by King and others to end intolerance and injustice and lift up the poor.

“What’s really disgusting is that after 50 years, we have the same issues,” he said, gesturing beyond the crowd to the stoops of boarded houses where a few area residents sat watching the rally.

“In fact, the gap between rich and poor is widening.” 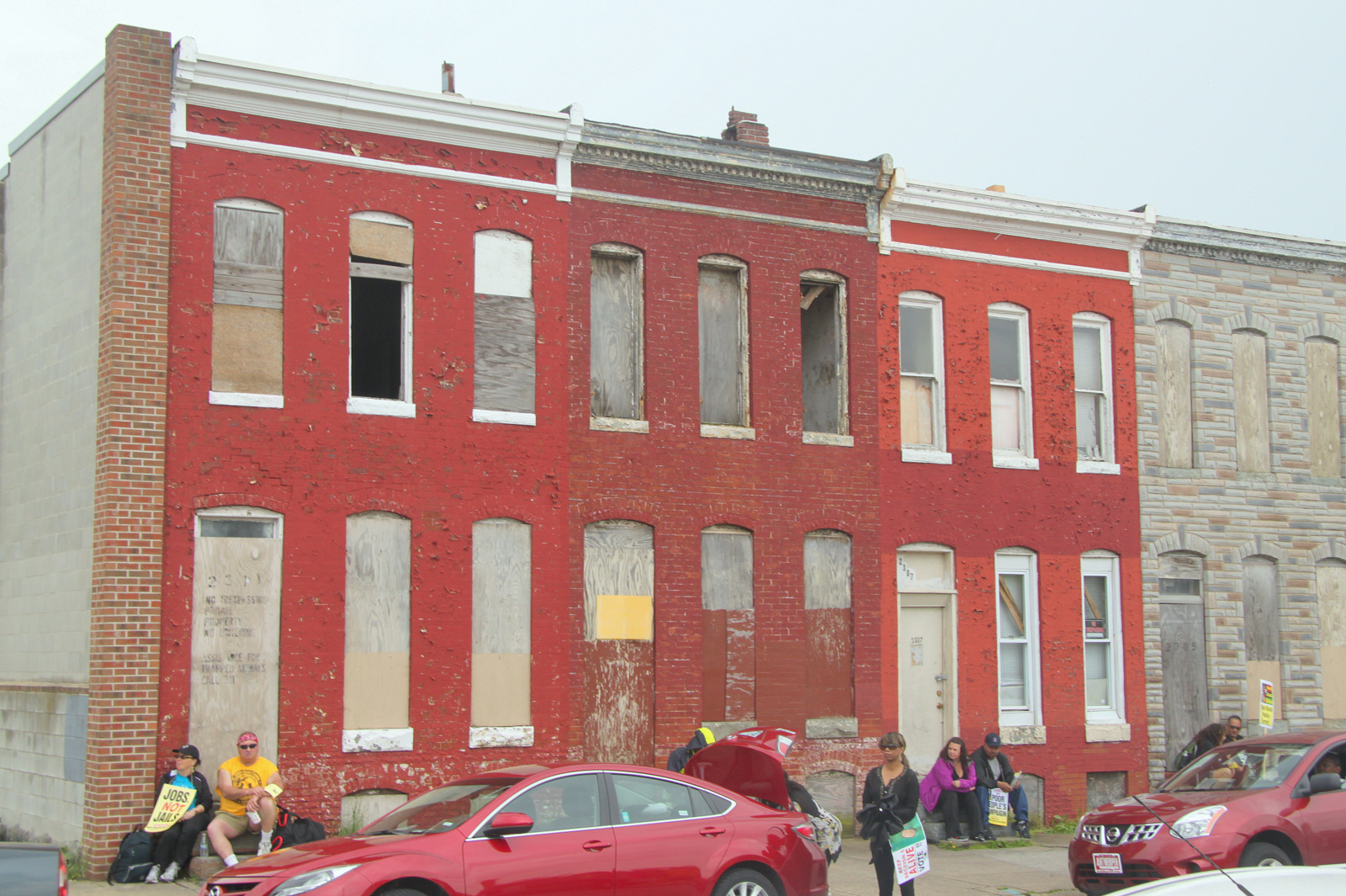 How East Biddle Street looked yesterday during the rally. (Photo by Louie Krauss).