Baltimore officials are proposing a 42% increase in water and sewer rates over the next two years, with the biggest jump starting in six weeks.

The 15% increase on July 1 – almost certain to be passed by the Board of Estimates – would affect 1.8 million residents in the region who rely on “city” water and who discharge waste into sewers maintained by the Bureau of Water and Wastewater.

The steep increase is needed to modernize an aging system prone to breakage and to meet a federal consent decree to stop sewage from overflowing into the Chesapeake Bay.

Fox and his aides said the city has taken major steps in improving its poorly-functioning water billing system and “investing ratepayer dollars into the most effective, efficient, essential projects and programs.”

Three weeks ago, City Comptroller Joan Pratt faulted the agency for seeking $27 million for private consultants, led by Rummel, Klepper & Kahl, to oversee upcoming sewer repairs. The funds were approved over her objections by the Board of Estimates.

Last year, The Brew disclosed that the water bureau failed to collect $5.4 million from RG Steel Sparrows Point – the largest user of processed city water – before the company went bankrupt and was liquidated.

The latest rate increase comes on top of six yearly hikes that have increased water and sewer bills for the average consumer by nearly 50% since 2008.

Today’s announcement represents the first time the city has broken the double-digit “barrier” of rate increases. In prior years, the annual hike has been kept to 9% or less.

That would make for a 41.7% jump between now and July 2015, when the third hike would go into effect.

Typically, the Board of Estimates has established new rates one year at a time and not committed to a three-year schedule as proposed today by DPW.

The board will listen to citizen comments about the proposed rates at its regular June 26 meeting before voting on the rate increase, which was submitted by the Rawlings-Blake administration and has the full support of the mayor. 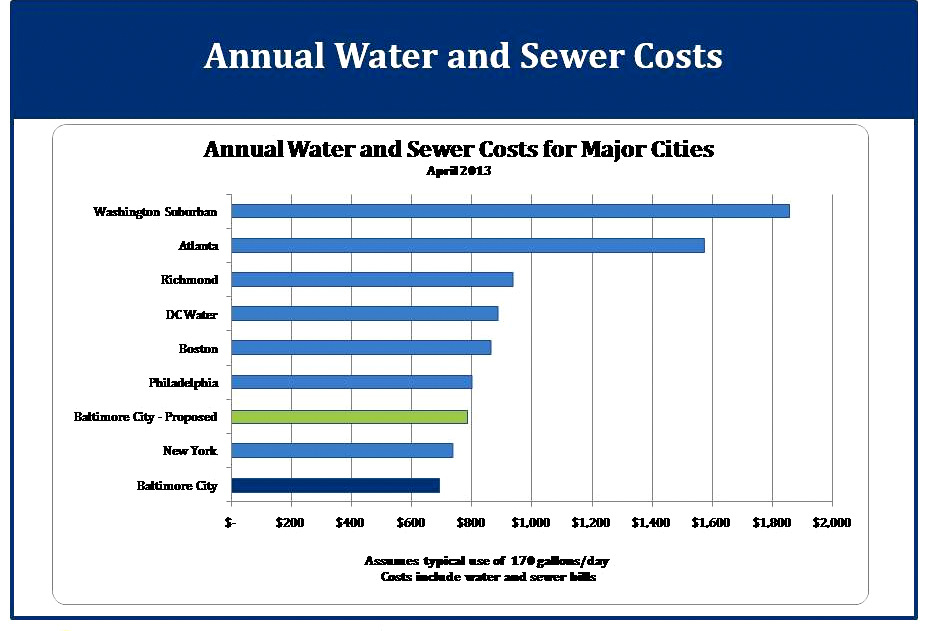 Baltimore’s current and proposed rate (starting July 1) compared with other jurisdictions. The chart places the proposed 2013 rate below Philadelphia and Washington, but higher than New York City. (From Baltimore DPW)

The new rates would automatically affect consumers in Baltimore City and Baltimore County. Rate increases in Howard, Anne Arundel and Carroll counties would need to be approved by those jurisdictions.

Lowering the Usage of the “Average” Consumer

To help ease the public-relations fallout of today’s proposed increase, the Bureau of Water published a new formula for calculating the cost of the new rates to consumers.

In prior years, the agency has used as an example “the typical family of four using 320 gallons per day.” But today’s press release – and documentation to the Board of Estimates – calculates usage for a “typical city consumer using 21 ccf (1 ccf equals 100 cubic feet) per quarter.”

The new example translates into just 170 gallons of water per day – or nearly half of the old standard.

As a result, agency calculates an increase of $94.50 in fees over the next fiscal year, compared to a $170.10 increase using the old formula.

“Flush” and Stormwater Fees Not Included

Today’s rate increase does not include the $60-a-year Chesapeake Bay Restoration fee, or “flush tax,” added to all consumer bills as a result of action taken by the Maryland legislation last year.

Nor does it include a new stormwater fee mandated by the state. Mayor Stephanie Rawlings-Blake has proposed a fee schedule that will cost single-family households between $48 and $114 per year.

The fee would substantially increase the stormwater costs for businesses and larger residential properties. Also set to go into effect on July 1, the stormwater fee has stirred opposition mostly from business groups.