The $1 billion Harbor Point project on the city’s waterfront won’t start paying property taxes to the city until 2025, according to the city’s financial consultant.

This information, buried in a 107-page report by MuniCap Inc., contrasts with a press release issued by Mayor Stephanie Rawlings-Blake last week.

In its opening sentence, the June 3 release says that Harbor Point will “generate, on average, $19.6 million in new city tax revenue annually.” The number is repeated elsewhere in the release.

This figure was derived by averaging out projected revenues through year 2049 – and ignoring $113 million in already-approved “EZ” (enterprise zone) and brownfield tax credits to the developer.

The analysis by Columbia-based MuniCap is the first detailed look at the tax subsidies of Harbor Point, which has been a subject of controversy since the city redrew its map of “disadvantaged communities” to make the site eligible for the EZ tax credits.

The EZ credits will save Harbor Point’s developers $88.4 million between 2014 and 2033, while brownfield tax credits will shave off another $24.5 million. (Harbor Point is to be built on the site of a former Allied Chemical factory where highly toxic chromium was produced.)

The tax credits, however, will reduce the stream of tax revenues available to the developer to pay off interest on $107 million of TIF (tax increment financing) bonds that the mayor now wants the City Council to approve.

The net result is that Harbor Point – with its planned 3 million square feet of office, apartment and retail space – is more financially risky than previously disclosed by the Rawlings-Blake administration.

The underlying risk is that the developer, Michael Beatty, will come up short on debt service if there are unexpected construction delays – or if office and apartment space is leased below expectations.

While the city is not legally obliged to guarantee TIF bonds, “TIF debt is considered by the rating agencies as debt of the city,” says the Bureau of Treasury Management.

The city typically tries to hedge against the risk by setting up a “special tax district” that has the authority to access additional taxes on property owners. The Rawlings-Blake administration is following this approach in its  bond proposal for Harbor Point.

Last week, Beatty said Harbor Point would not go forward without $107 million in TIF bonds – even though Exelon Corp. has publicly committed to locate its regional headquarters on the site.

“Maybe they’ll keep it in Chicago. I don’t know,” Beatty told reporters at a press conference.

At the same conference, Brenda McKenzie, president of the Baltimore Development Corporation (BDC), argued that “there is no risk to the city’s bottom line” because “we have a developer who is willing to put their finances on the line to ensure the city would not be in debt.”

McKenzie added that the city “will receive [ownership] of the property” if the developer defaults on the bonds.

But such a possibility would impose tremendous costs on the city, not to speak of having to dispose of 27 acres of partly-finished high-rise buildings.

Currently, the city is struggling to pay the debt burden of the Hilton Convention Center Hotel, built with $300 million in TIF bonds under the Martin O’Malley administration.

In March, Finance Director Harry Black told the City Council that the city may have to restructure the Hilton debt to meet $11.7 million in interest payments due September 1.

Much of the job creation comes from the infusion of government spending at the waterfront site to finance a bridge, utilities, a promenade and five parks. (See Gerald Neily’s analysis of the timing and nature of these projects.)

Were the city to direct the same $107 million toward rebuilding 1,000 abandoned rowhouses (at $107,000 a house), an equivalent surge in construction jobs would be generated, plus new residents paying property taxes without resort to “EZ” or brownfield tax credits.

Below are the two charts – separated by 62 pages of intervening material – that disclose the shortfall of tax revenues over the next dozen years to pay off TIF debt service.

The first chart shows (far right column) the amount of projected tax revenues available each year after deducting EZ and brownfield tax credits. The second chart projects the annual debt cost of the TIF bonds ($263 million in interest and principal over 35 years). 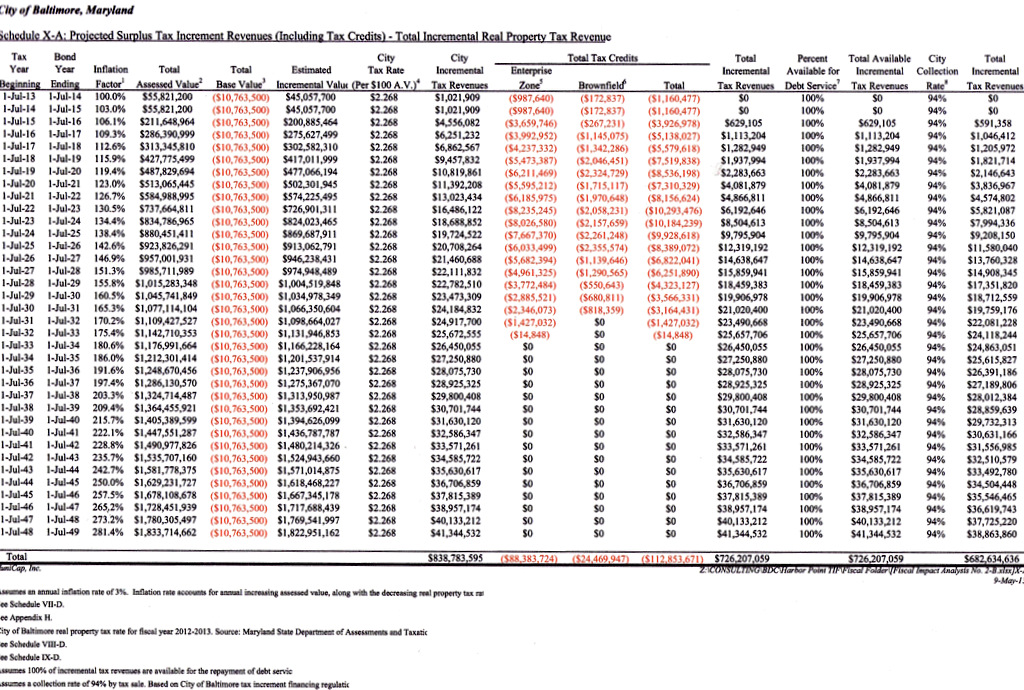 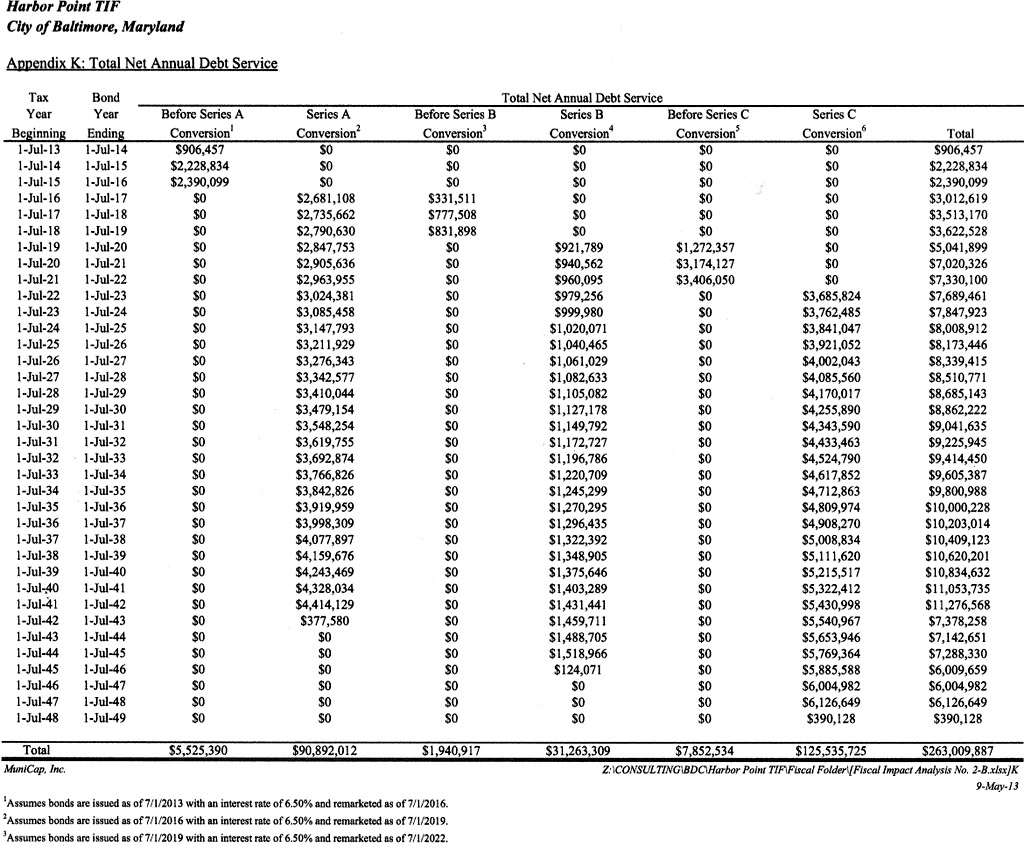