Mayor Stephanie Rawlings-Blake jetted to San Antonio, Texas, to deliver a speech last night to the national convention of the Young Democrats of America, a group closely tied to the Democratic National Committee.

Rawlings-Blake denounced the Republican Party for its positions on immigration reform and other issues in what was described as “a great keynote speech” on the YDA’s twitter feed.

The frequency of the mayor’s absences from Baltimore have accelerated since her appointment in January as secretary of the DNC and her parallel rise within the nonpartisan U.S. Conference of Mayors.

Since late May, she he has taken four trips west of the Mississippi River. 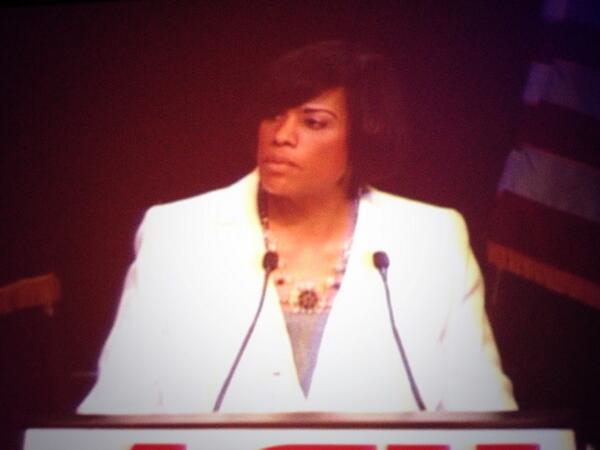 The mayor speaking at the San Antonio Marriott Rivercenter. (@youngdems)

The trips (which included her officiating at lobbyist-friend Lisa Harris Jones’ wedding in Las Vegas) were funded by the city’s general fund and included the travel expenses of her Baltimore Police security and one or more aides.

The financial arrangement for this weekend’s travel was not disclosed by the mayor’s office.

Interim spokesman Travis Tazelaar did not respond to The Brew’s questions about the Texas trip. Typically, political appearances by elected officials are funded by the sponsors of the event.

“Leadership for Decades to Come”

Over recent months, Baltimore’s mayor has been described as one of the fresh new faces of American politics.

The YDA convention grouped her with the Texas-born Castro brothers as “among of the most promising rising stars in the Democratic Party who will provide leadership for decades to come.”

Joaquin Castro, a U.S. Representative from Texas, and his identical twin brother, Julian, mayor of San Antonio, were also speakers at the YDA convention.

Last night, Rawlings-Blake took aim at the Republican Party before about 1,000 young activists. “Republicans say they want to take this country back, but they mean they want to take it backward,” she was quoted as saying on the YDA’s twitter feed.