A ban on automated machines that pay instant cash for used cellphones won final approval by the City Council tonight, with Mayor Stephanie Rawlings-Blake applauding the vote as “a step in the right direction for a safer Baltimore.”

The ordinance making so-called Automated Purchasing Machines (APMs) a prohibited use in the city came in the wake of this year’s wave of cellphone theft focusing on Baltimore-area walkers and joggers.

Made by San Diego-based ecoATM, the kiosks recognize phones, tablets, iPods, Kindles and other mobile devices and spit out hundreds of dollars for later models.

Kiosks have sprung up in all the major malls just outside the city line. Company officials stress the array of safeguards they have created to discourage thieves, including fingerprint and driver’s license scanners and real-time video monitoring.

But law enforcement officials and other critics say the technology, marketed as a way to promote recycling of old electronics, has also been “like a honeypot” for thieves, with phones from some Baltimore-area muggings winding up in suburban ecoATMs.

“These machines have been known to attract criminal activity, making it harder for communities to be safe,” Rawlings-Blake said in the statement her office released late today to the media.

“I support this ban and additional efforts that government and private industry can make to reduce incidents of crime surrounding these machines and to improve technologies that can permanently deactivate a stolen cell phone, making the device obsolete and reducing the incentive for criminals to steal them,” Rawlings-Blake said.

Statewide and National Problem, Too

The larger issues she references will, in part, be taken up in Annapolis, since other jurisdictions have so far permitted the kiosks to be installed. 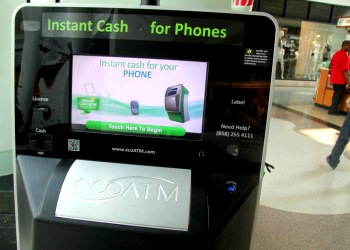 Recognizing the need for a uniform approach across the state, several state lawmakers who represent Baltimore have already said they are drafting bills to regulate APMs in the upcoming Maryland General Assembly session.

Delegates Luke Clippinger (D-46th) and Del. Mary L. Washington (D-43rd) are both working on legislation which they said would be aimed at restricting APMs in the interest of public safety but could conceivably be worded to allow them – if they can be made to  adhere to the same reporting requirements imposed on second-hand dealers.

“There is an environmental value to keeping these things out of the landfills,” Washington said.

Councilman Bill Henry floated that idea as well but it garnered no support on the Council amid concern over the crime wave and doubt about whether the technology could be made to reliably identify and track stolen phones.

Some in law enforcement and in Congress have championed a national stolen phone data-base and pressured phone companies  to install kill switches that would remotely disable smartphones, making them less valuable and less of an attraction for thieves.