We were in Federal Hill on Monday trolling for news (and not finding much) but luckily, at the corner of Cross and Charles streets, we shifted our gaze away from the streets and up at the sky.

There, hovering above the bars and brick rowhouses, was what looked like a four-legged, ottoman-sized bug with six arms projecting out from the center, a propeller twirling like a cheerleader’s baton on each arm.

Emitting a faint whine, it moved – slow, then fast, then slow – hovering over the street and the oblivious passersby exiting from Cross Street Market.

Cameron Uhlig stood below, guiding its movement like a kid with a remote-control helicopter. (Unlike those RC toy copters, which always seemed to cartwheel out of control and crash into a lamp on Christmas morning, this thing moved smoothly and landed gently.) 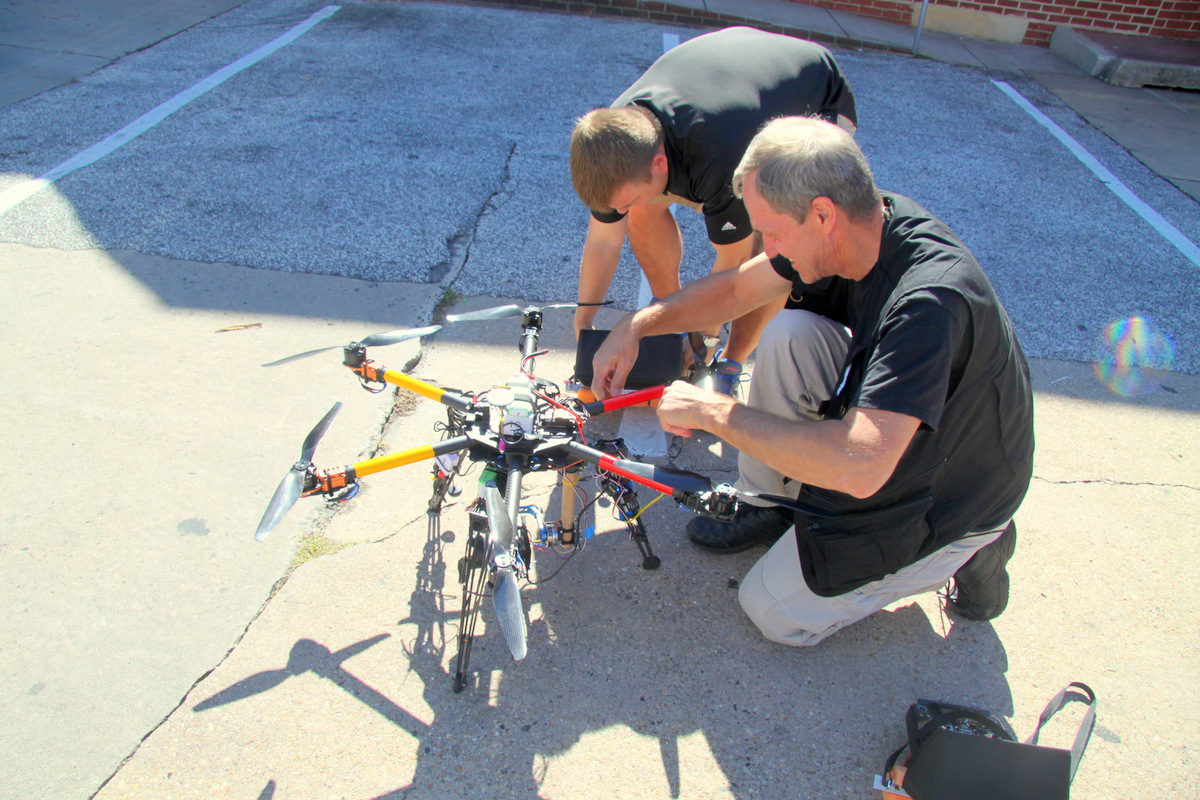 Cameron Uhlig and Allan Hollowell with the drone-mounted camera that they are using to make a Visit Baltimore display. (Photo by Fern Shen)

Uhlig and colleague Allan Hollowell were standing, by coincidence, in the parking area of the spot where the proprietors of Michael’s Cafe in Timonium had wanted to open a restaurant. (They announced they are dropping that plan amid community opposition.)

The men said they are using the drone-mounted camera all over Baltimore to film footage for a display about the city. They are using their company’s “CineMapping” story technology, according to the company Facebook page. It’s going to be part of a “unique theater experience” set to open next year at the Baltimore Visitor Center at the Inner Harbor.

The device allows them to get their camera up hundreds of feet in the air for a fresh view of the city’s landscape and various landmarks. 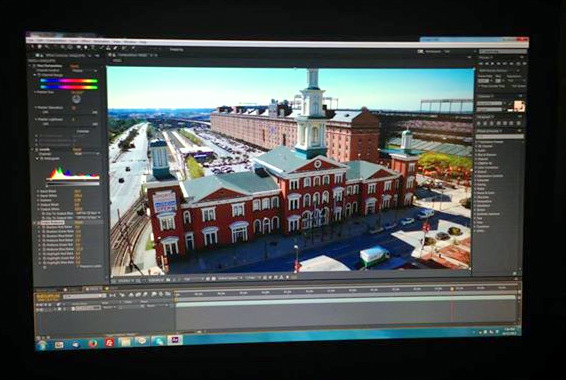 A drone’s view of Camden Station, with Oriole Park in the background. (Camagine Design Facebook page)

On Monday, in Mount Vernon, they got their high-hovering camera right up next to the Washington Monument.

Did they shoot up into the nostrils of our first president?

“We were basically right up by his shoulder,” said Uhlig, who pilots the drone while Hollowell operates the camera.

Other subjects that day included City Hall. (Check out the brief video clip of them sending the drone out over War Memorial Plaza. It was posted on their Facebook page.)

The men were reluctant to offer details about the display they are planning for the city, but enthusiastic about their work. Just because the device is unmanned, for instance, doesn’t mean the process is without thrills for the operators.

“When it gets up around 400 or 500 feet, it makes me, uhh, really pay attention,” Uhlig said, looking down protectively at the contraption, which was innocently resting on the ground. Hollowell hastened to add that they worry not just about the loss of pricey equipment, but of safety.

“It has a lot of safety mechanisms built into it. It’s got a GPS and an an altimeter,” he said. “If it were to get low on battery, it’s programmed to return to the spot it started from.”

Baltimore residents may be getting used to weird flying objects.

Last month, people started noticing a white blimp over the city which turned out, according to media reports, to be a government research airship doing aerial mapping – a project of the U.S. Naval Research Laboratory.

The Camagine drone does draw its share of onlookers, who tend to stop in their tracks, according to its operators, and stare at the airborne zig-zagging device. Uhlig said that when they see one of these gawkers, they pause their filming to keep slack-jawed people out of the footage.

Just then we heard another whirring motor over our heads. Uhlig pointed up in the sky to another Baltimore phenomenon that makes them pause the filming and keep their distance – the police department’s Foxtrot helicopter.

“We definitely make sure to stay away from those guys.”