The city’s biggest park has suffered acutely from this need for decades and the city’s lake plan, announced two weeks ago, only re-emphasizes its importance.

The plan focuses on the portion of the park directly north of Eutaw Place, which numerous homeowners have been painstakingly attempting to restore to its former splendor.

The Brew’s Mark Reutter reports that such a linkage has been “discarded as irrelevant” under the Bureau of Water’s plan to build underground storage tanks at Druid Lake to meet federal clean water standards.

The city obviously thought the same thing back in the 1950s when the park was mercilessly cut off from its surrounding neighborhoods by Druid Park Lake Drive and the Jones Falls Expressway. One need only observe the disembodied park gateway on Madison Avenue to see the result. 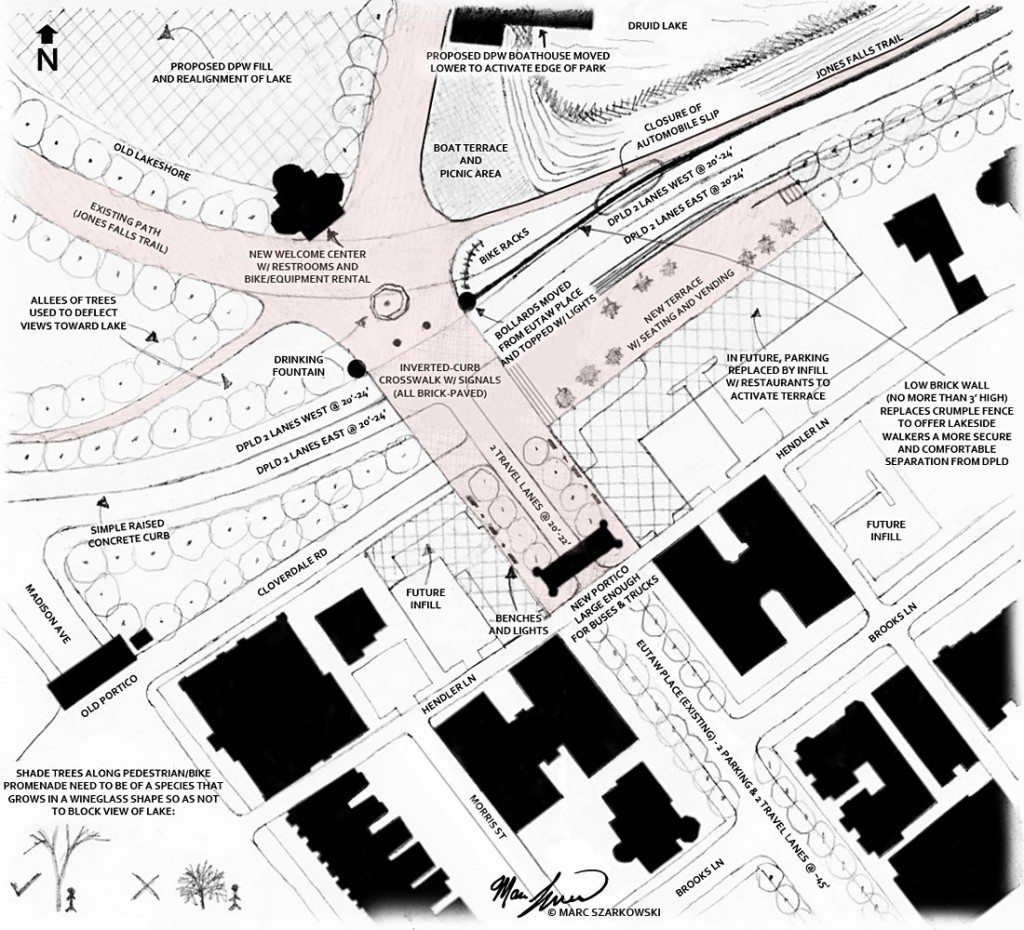 A plan for a Eutaw Place entrance into Druid Hill Park. (Marc Szarkowski)

Druid Hill Park was considered a “hot area” at the time. Mondawmin Mall was a brand new showplace and the city even contemplated putting the Baltimore Arena (originally called the Civic Center) inside the park. Wouldn’t that have been far out?

Even when the city finally repaired some of the damage from the roadways, it also made it worse.

But at the very time the city finally restored the loop for people and bikes, they inexplicably eliminated the park entrance at Eutaw Place – not just for cars, which would be understandable, but for bikes and people, too.

The result is that today the intersection of Druid Park Lake Drive and Eutaw Place has no sidewalks, no crosswalks, no pedestrian signals and not even a hint of a suggestion that people might want to enter the huge adjacent park.

So the new lake plan’s lack of a gateway is as consistent with the present as it is with the past.

Druid Park Lake Drive is such a vicious automotive intrusion that concentrated focal points of human activity are needed on both sides of the intersection, all carefully coordinated and designed to make the park as alluring as possible.

On the park side, the $130 million lake project presents virtually limitless opportunities to create such a gateway. The critical requirement should be that all of the new active park features, such as the proposed boat house and perhaps a park welcome center, should be oriented to the Eutaw Place spine. 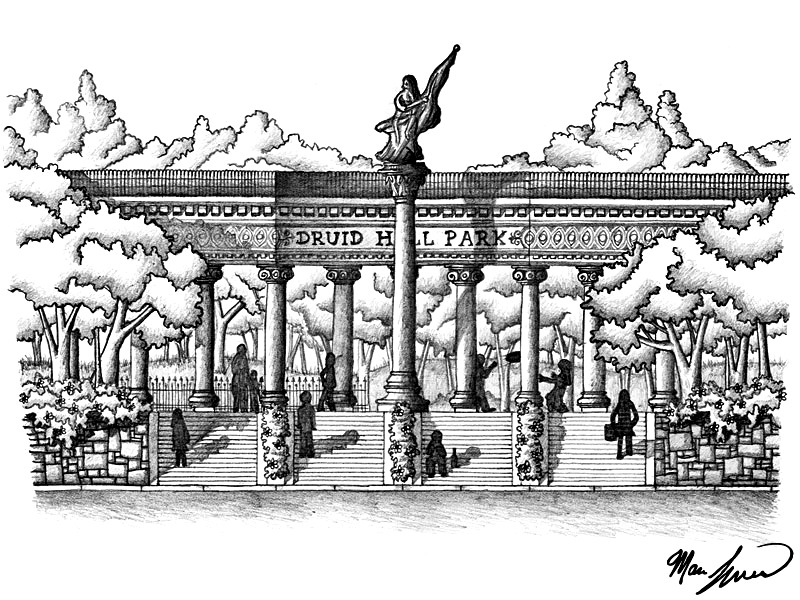 A drawing of a pedestrian-oriented entranceway from Eutaw Place into the park. A street portico where traffic goes through is also possible. (Marc Szarkowski)

On the community side, the opportunities are more constrained. What can be done there will therefore set much of the overall tone.

Fortunately, the intersection of Druid Park Lake Drive and Eutaw Place itself can be redesigned and downsized to greatly expand these possibilities.

On Druid Park Lake Drive, there are no left turns to justify the additional third lane in either direction at this point. On Eutaw Place, there is no reason for the “free-flow” right turn lane. The intersection can thus be narrowed significantly with no reduction in traffic capacity.

The four remaining lanes of Druid Park Lake Drive can be pushed up to the north curb, which along with the narrowing of Eutaw Place can create a far safer, more attractive and more spacious pedestrian crossing befitting a gateway.

The new space created by the roadway narrowings can also effectively extend Druid Hill Park itself into the Reservoir Hill community.

A wide attractive pedestrian/bike promenade can be provided on both sides of the intersection to provide the best possible linkage and maintain the longer distance view corridor between the park and the rest of the Reservoir Hill Eutaw Place community. 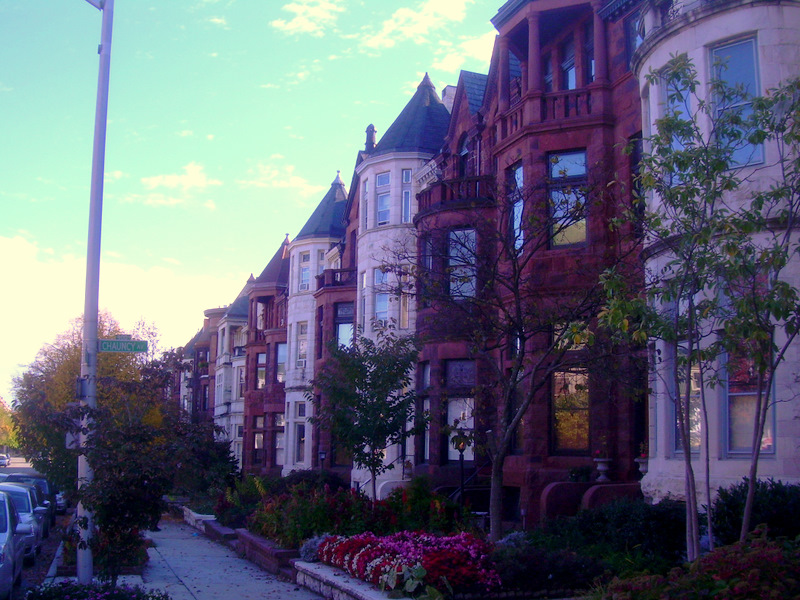 Unlike the vestige of an old portico on Madison Avenue which really is no longer a gateway to anything, and merely calls attention to its anomaly, the theme of a Eutaw Place gateway can clearly be designed to focus attraction onto the huge beautiful park itself.

Providing a similar portico on Eutaw Place which echoes the Madison Avenue portico would help unify the whole area. The sketch provided here shows yet another portico variation for pedestrians-only for another location.

The sloping topography between Druid Park Lake Drive and the neighborhood is such that a distinctive terrace could be created which hovers above and hides the traffic, diverting one’s attention toward the park beyond. Unfortunately, the topo does not lend itself to a pedestrian tunnel or bridge.

The result should be that the park and the community can be truly unified at the appropriate human scale.

This Eutaw Place gateway should be highly visible, memorable and iconic, with design motifs shared between the park and neighborhood. Proposed natural elements of the city plan such as the “bioswale” must be secondary and complimentary to the human orientation not focal points in and of themselves.

In sum, the roadway narrowings and the new treatment on the Reservoir Hill side can be done independently of the lake project, but the design as a whole should be thought out comprehensively to avoid repeating the narrow-mindedness of the big projects past.

The Eutaw Place gateway should be the first step in long-term improvements of all of Druid Hill Park connections, from the city’s long-proposed resurrection of the Park Circle roundabout (here) to a promenade from Mondawmin to the Zoo with an enhanced Auchentoroly Terrace (here).

Anyone walking about in the local communities ought to be able to slip effortlessly into Baltimore’s premier park.
_____________________
Gerald Neily was transportation planner for the city Department of Planning from 1977 to 1996. Marc Szarkowski creates plans, models, and illustrations of urban design, planning, and architecture proposals, and is a graduate of Rensselaer Polytechnic Institute’s School of Architecture.