Some might look at the painted screens of Baltimore and see kitsch or simple decoration. Many don’t really notice them at all.

But in 1974, folklorist Elaine Eff saw them and realized they were a window on the soul of a city.

Back in the days when marble steps were for scrubbing and socializing, rowhouse dwellers gave these painted depictions of red-roofed cottages, a pond and swimming swans pride of place – installing them in the single street-facing first-floor window.

Against the harsh city streetscape, the screens’ bucolic imagery was a touch of the old country for the Germans, Poles, Czechs, Ukrainians, Irish and Italians working in mills, factories and the waterfront.

And they were cheap, as filmmaker John Waters points out in the 1989 documentary you can see running on a continuous loop at the new show Eff has assembled at the Maryland Institute College of Art, a wild and epic display of her lifework. (It’s called Picture Windows: The Painted Screens of Baltimore and Beyond.)

“If they would make their price a thousand dollars, they would be written up in the New York Times,” the young Waters says. “But because they are $30, people say they can’t be art.”

Different From Anywhere Else

At a party to celebrate the show that opened this weekend and Eff’s definitive new book, “The Painted Screens of Baltimore, an Urban Folk Art Revealed,” television producer and former Baltimore reporter David Simon tried to explain what the unique tradition gives to its hometown. 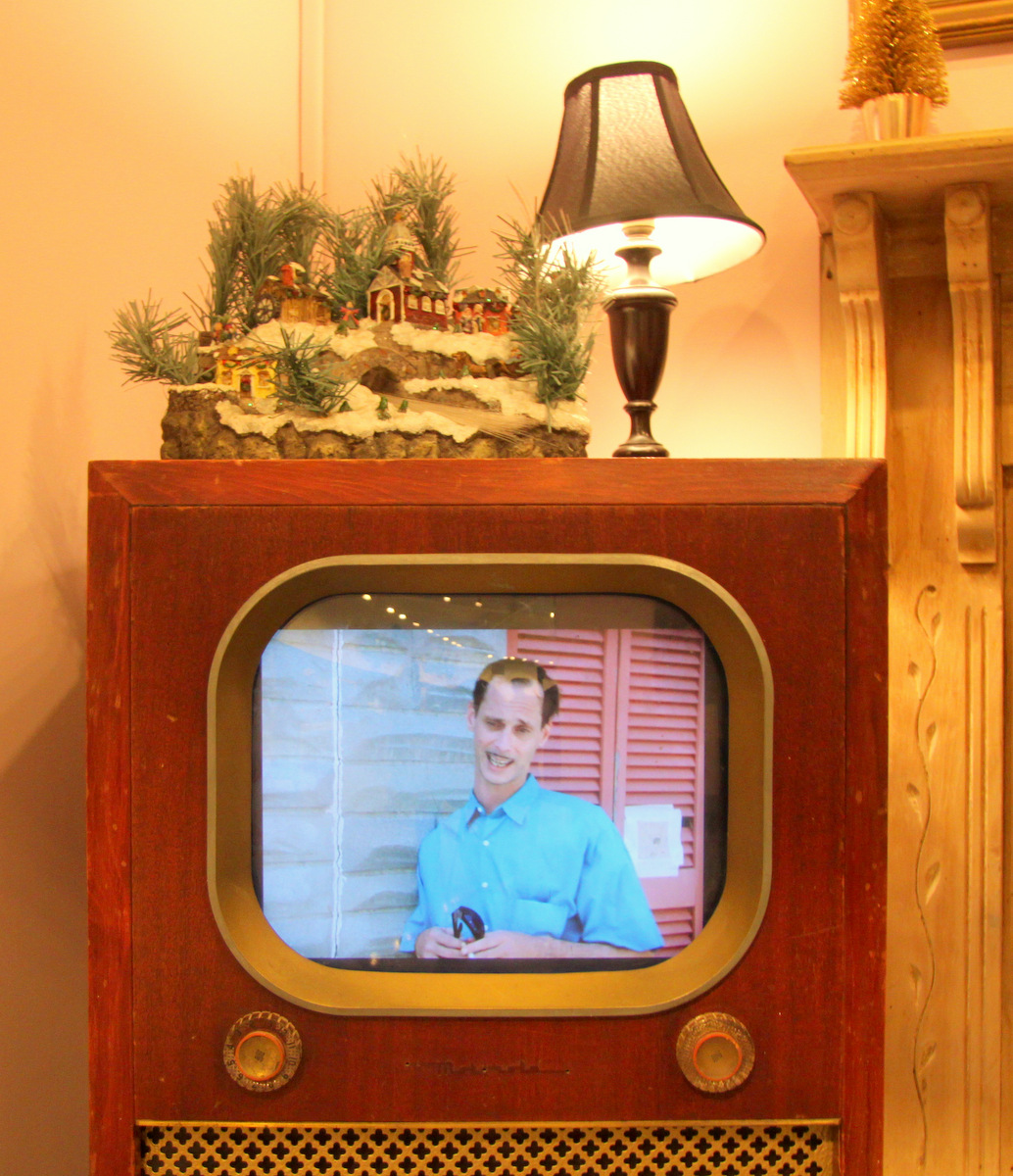 For nearly four decades, painted screens have been Eff’s codex, her double helix or, as she calls them, her Rosebud.

She’s been collecting them, promoting them, researching their origins in the U.S. and Europe, tracking down, interviewing and befriending the screen painters and the people who hire them, leading tours of painted screens in the city, co-founding the Painted Screen Society of Baltimore and encouraging people who want to learn the technique and keep the tradition alive.

“To have found it, to have recognized it for what it is,” Simon said, turning to Eff Saturday night, “is a real prize, it’s a real triumph.”

Blaze Starr and the Universe

Those who are familiar with the classic red-roof bungalow scene will see it in all its stylistic variations at this exhibition. But they may be surprised by all the other subjects the artists selected:

There are cats and dogs, three-masted sailing ships, Elvis, the racy pin-up model Bettie Page, arabbers, Blaze Starr, the Shot Tower, Edward Hopper’s “Nighthawks,” a sci-fi depiction of the universe and much more. 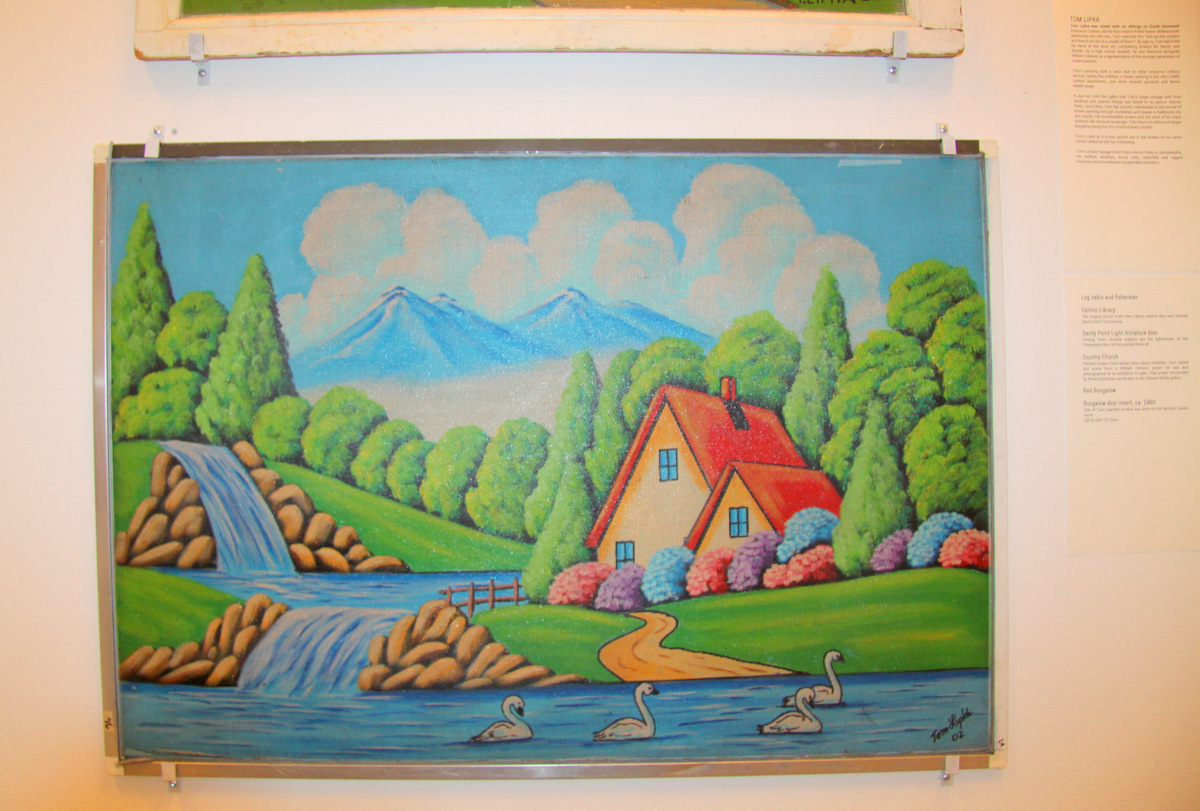 Ever the individualist, screen painter Johnny Eck departed from the strict conventions of the meme by painting blue roofs on his bungalows.

That’s just a smidgen, by the way, of what’s unique about Eck, the fabled Baltimore sideshow performer whose physical condition – he was essentially born without the lower half of his body – appears to have emboldened him to take on screen painting, sculpture, acting, race-car driving, operating a Punch and Judy show and more.

(“The Amazing Johnny Eck,” a companion show across the hall running concurrently with “Picture Windows,” includes more than 200 photographs, drawings and objects from Eck’s life.)

Eck and many of the city’s other artists learned their craft at William Oktavec’s “Art Shop” in East Baltimore – this First Family of Screen Painting is heavily featured in the show.

So intertwined were the four generations of Oktavecs in the evolving tradition, as they inspired and mentored others, that Eff has hung for visitors a kind of family tree to keep it all straight. 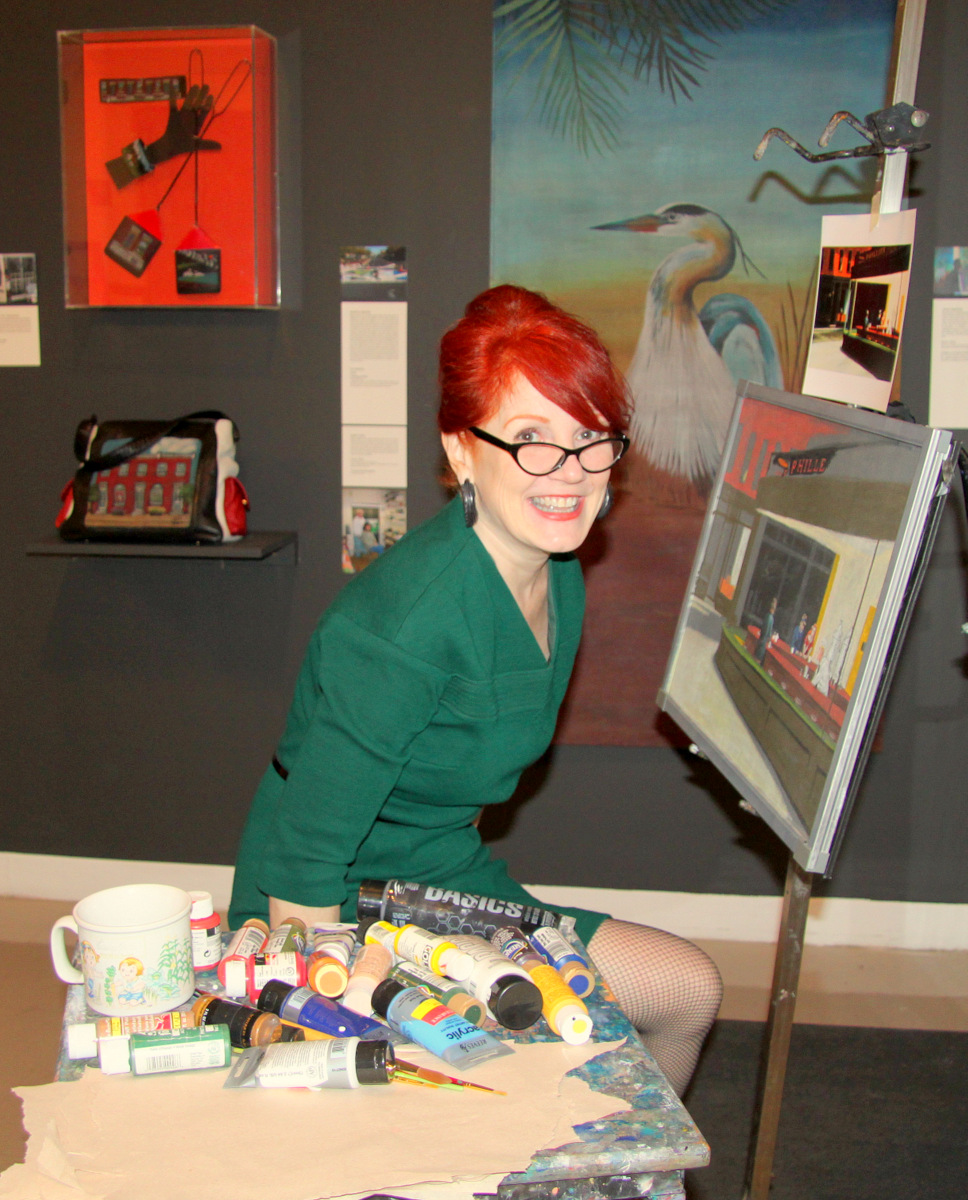 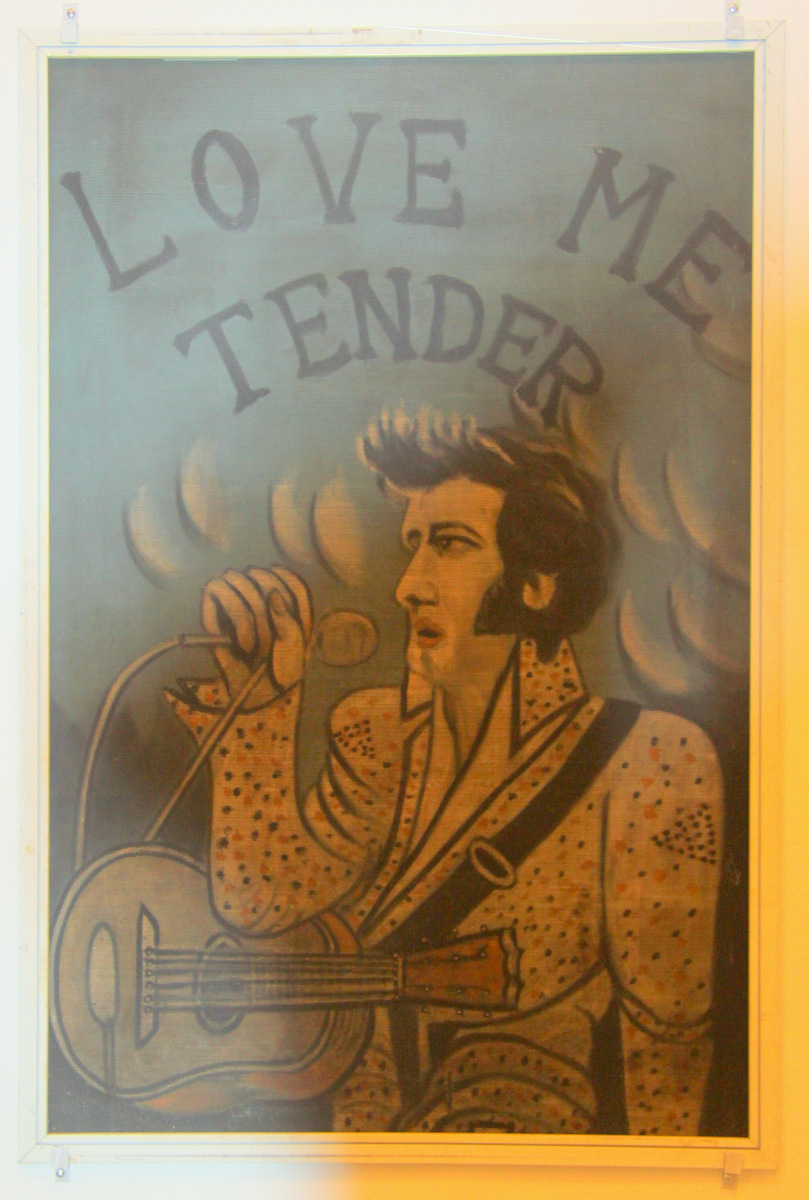 “The King,” on a screen by Ben Richardson. (Photo by Fern Shen)

Regarded as the art’s modern local founding father, the Bohemian-born Oktavec 100 years ago made what appears to have been the city’s first painted screen on his grocery store at the corner of Collington and Ashland avenues (an area now mostly cleared of its old rowhouses).

Eff has included the shop’s Art Deco sign in the show, as well as paint, airbrushes and other tools.

She also includes the results of her research into the tradition’s origins in other cities and in Europe, including a 1726 trade card for John Brown of London advertising “blinds for windows made and curiously painted on canvas, silk or wire.”

Why the art form found favor in England, Europe and other parts of Victorian America (in cities such as Boston) and then disappeared until the Oktavec era, is a mystery Eff leaves unsolved.

The Man with the Collapsible Stool

But in the show and in her 255-page book, Eff’s tenderest feelings are reserved for the people whose lives these curious creations illuminate.

There are the self-taught artists like Ben Richardson who painted screens for beer money or extra cash “to pay my water bill or do some marketing.” There’s screen painter Charles Bowman, who was also an accomplished fiddler player and the man who came up with the catch phrase, “I’d walk a mile for a Camel.”

And there are the recollections of artist Dee Herget, who remembers being fascinated with the man with the collapsible stool who worked her neighborhood yelling, “Paint your screens!” 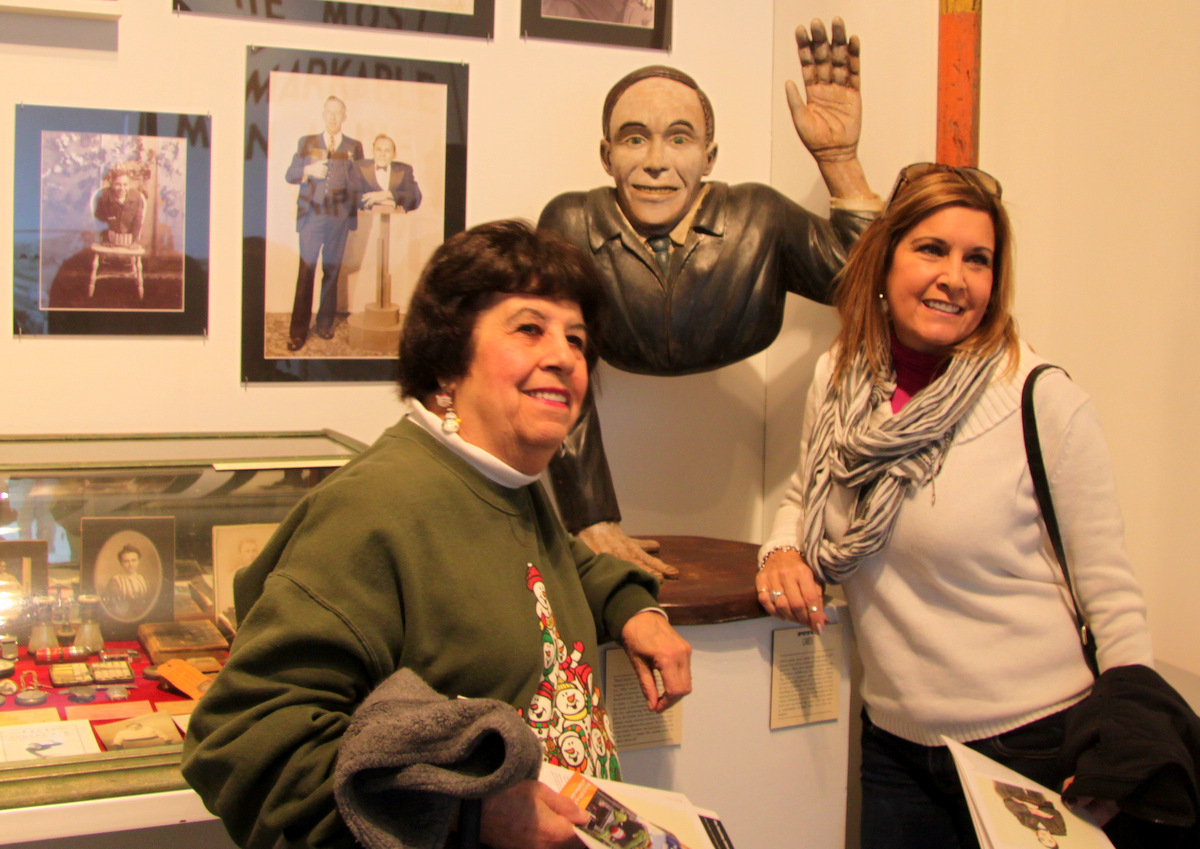 “All you could do in those stupid rowhouses was play on the sidewalk and marble steps,” Herget recalled for Eff. “No toys.”

The book is chock full of lore Eff has collected over the decades, including the tale of the short-lived painted screen installed at the Governor’s Mansion by William Donald Schaefer’s “first friend,” Hilda Mae Snoops.

You See Out, They Can’t See In

Eff’s own story could be included in the book, including the saga of getting the lavishly-illustrated book published. Turned down by the John Hopkins University Press, it was published by the University Press of Mississippi with support from a grant from the Andrew W. Mellon Foundation. (It’s designed by Kristen Spilman.)

In its pages, Eff is able to mine the subtler and not sentimental meaning of the tradition. 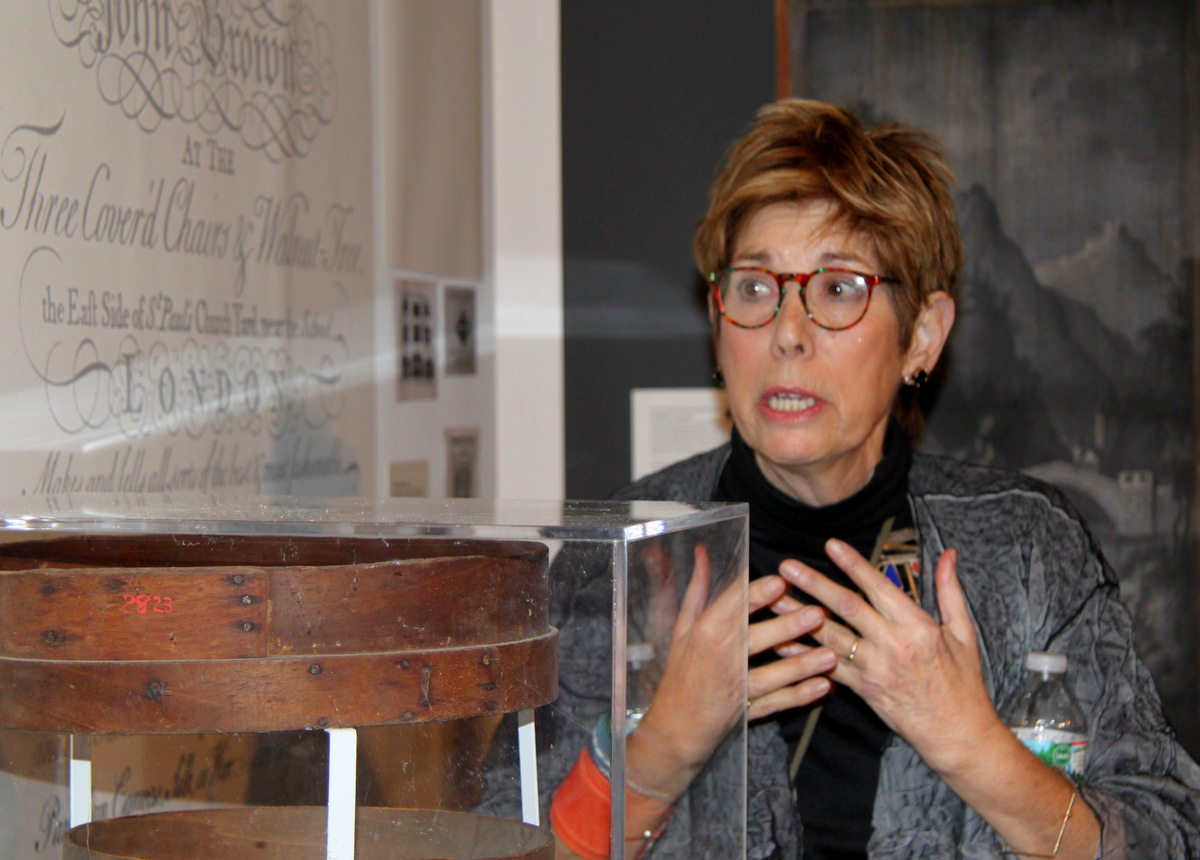 Folklorist Elaine Eff has been researching and cherishing the painted screen tradition since 1974 . (Photo by Fern Shen)

For instance, as they beckon by creating a kind of outdoor art gallery, painted screens also set privacy boundaries with the neighbors.

From the inside, the screen appears unadorned and the residents can see out. From the outside, all that’s visible is the artwork.

“Painted screens are a gift to the streets” Eff writes, but they’re also “one community’s way of saying ‘Enjoy the view, but keep moving.’” 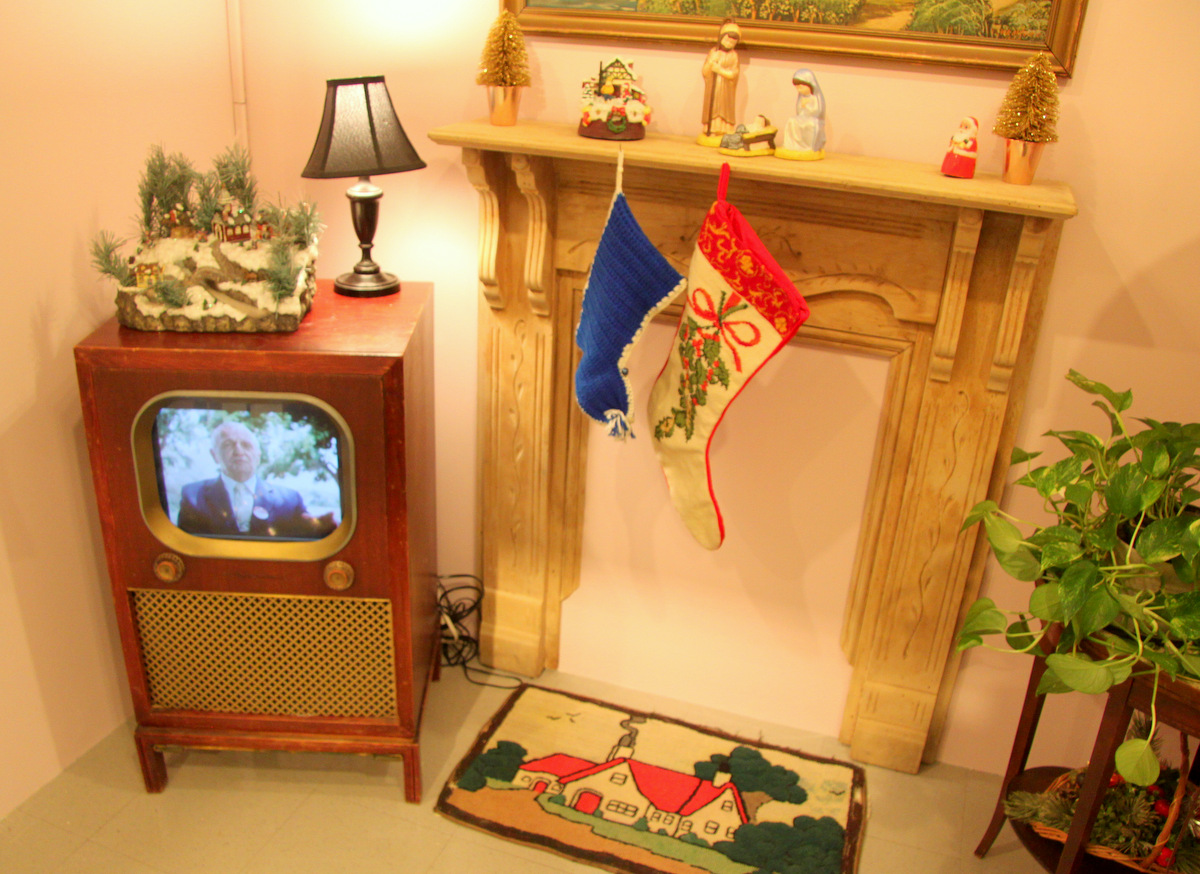