Baltimore’s vacant rowhouses have spawned lawsuits, catchily-named mayoral initiatives, slumlord-shaming projects (that have landed their arch perpetrator in court and, most recently, in The Wall Street Journal) and, for the people who live near them, a day-to-day headache in the form of trash, rats and crime.

Now they have inspired a sprawling dystopian novel that is the literary darling of the new year: On Such a Full Sea by Chang-rae Lee.

Lee has said he got the idea while riding on Amtrak trains between D.C. and New York and seeing the bombed-out-looking landscape of East Baltimore.

In his book set hundreds of years in the future, the U.S. government has collapsed, the population dispersed, and immigrant workers largely from China have come to labor in the former Baltimore, now named B-mor.

The kind of deserted areas Lee saw through the train window are re-purposed here for the production of fish and organic vegetables for the spoiled and indifferent elites called “Charters.”

The continent once known as China has been rendered unlivable by pollution in Lee’s 352-page epic. In B-mor, along with these onetime Chinese villagers and their snooty Charter overlords, are the wild and banished dwellers in the “Outer Counties.”

Upending our current class landscape, the book casts places like the today’s Harford County and chi-chi Columbia as the territory of hard-scrabble bands of outlaws.

Lee didn’t set out to write a dystopian novel, as the Korean-American writer and Princeton University professor has explained in interviews. 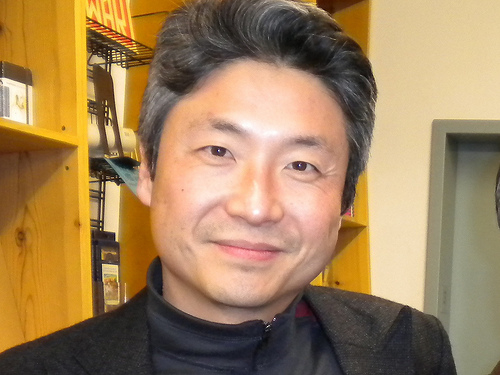 The book was supposed to be “a social realist novel of contemporary China focusing on Chinese factory workers in the Pearl River Delta,” but after researching the idea, he didn’t feel like he had a fresh angle, he told National Public Radio.

Lee, a frequent train rider apparently, hit upon the idea in a kind of epiphany one day looking down out of the window at “the same ghetto neighborhood of East Baltimore” he’d passed over for the last 35 years, he said in a Q&A with NPR’s Rachel Martin:

And separately I thought, you know, it’s just a pity that this neighborhood has been abandoned and rehabitated and abandoned again, serially over all these years, and I thought, why can’t just some — I don’t know — village from China settle this place, and I was just idly thinking that, and I thought, oh gee, well what would happen if such a thing happened? What a crazy, crazy idea!

The book doesn’t seem to have too much literal connection to the Baltimore of 2014, other than the general post-apocalyptic look of our 16,000-plus vacant houses.

There are African-American characters (the heroine is Chinese and her boyfriend is black), and it makes some references to our current streetscape:

But hold on, you might say. On our street, once called North Milton Avenue and renamed Longevity Way by our predecessors, who saw the nearly three-kilometer run of ruler-straight road and couldn’t help but think of wondrously extended, if not eternal, life, the main infractions are spitting or littering or publicly relieving oneself, most always perpetrated by the very old and very young and those who overindulge on nights before their free-day.

Through a Train Window

Lee is not the first creative to cruise through Baltimore on Amtrak’s Northeast Corridor and come up with a good idea.

Singer-songwriter Randy Newman said he got the idea for his song “Baltimore,” from the same train-rider’s-view of East Baltimore, obviously just as depressing and vacant-looking in the 1970s as it is today judging by his dirge-like lyrics.

City boosters, not surprisingly, have not taken kindly to what they regard as just artsy badmouthing.

Long before mayors were bashing David Simon for The Wire’s devastating depiction of Bodymore, Murderland, Comptroller Hyman Pressman was using his trademark doggerel to defend his hometown (We have a city that is bloomin’, but Randy Newman isn’t human.)

Business cheerleaders have long recognized the Amtrak gateway to Baltimore as a public relations problem, among other things.

“It serves to disguise to outsiders that the East Side and Baltimore are on the rise,” then-Greater Baltimore Committee chairman Charles O. Monk II said in 2010 at the group’s annual meeting.

“Rail travelers,” Monk complained, “see only the mostly vacant and boarded homes — many of them owned by the city — that are right next to the track.”