When Travis Kitchens got the assignment from City Paper to write about Jason Aldean’s February 1 performance at the Baltimore Arena, the country music writer and filmmaker was hoping he would be pleasantly surprised by the mainstream C&W superstar.

“If I liked it, I thought, it would make my traditional folkie friends go crazy,” said Kitchens. But instead he found the evening a disaster, with musicians “who play like the American Idol house band” and Aldean making “a horrifyingly awful attempt at rapping.”

“A lot like watching a two-hour beer commercial. . . a mindless dopamine rush as precise in its effects as methamphetamine,” Kitchens wrote. “He struts around the stage with his prop guitar like a rockstar android wiggling his ass in a manner so contrived it makes Madonna look like Miles Davis in comparison.”

Those observations come from Kitchens’ scathing review, published on February 4 on City Paper’s website, but taken down after a week – under pressure, CP editor-in-chief Evan Serpick and others say, from “two big advertisers.”

“We were told they said they would never advertise again, unless we pulled it,” said Serpick, who did so reluctantly after two days of resistance and the threat of losing his job.

“I’m not proud of it,” said Serpick, who disclosed the debacle to the editorial staff and – after a call from The Brew yesterday – included it at the end of a story on City Paper’s website about another incident. That would  be the recent nixing by CP’s current owner Times-Shamrock Communications of Joe MacLeod’s “Mr. Wrong” column (which consisted essentially of the f-word, repeated over and over again).

UPDATE: 4:30 p.m.: Serpick’s piece published yesterday has been taken down from the website, sources at City Paper said, and editorial staff have been locked out of the news blogs. “Even our webmaster can’t get in,” the source said. “None of us did this. We have no idea how it happened.”

Here’s a transcript of a phone conversation CP staff had today with Times-Shamrock CEO Scott Lynett. And here’s CP’s short post about the eight full-time employees terminated, this week, including creative director Joe MacLeod and circulation director Christine Grabowski, who has worked there for 30 years.

So who were the advertisers who complained about Kitchens’ review?

One of them, it turns out, was the local promoter for the Aldean concert, LiveNationDC. According to a source with knowledge of the situation, local Arena management found the article “terrible, more of a slam piece than a review,” complaining directly to City Paper and alerting Jeremiah Xenakis, director of marketing for LiveNationDC, who was “upset” about it.

Asked by phone and via email if he complained and threatened to stop buying any more LiveNation event advertising on City Paper – and if so, why – Xenakis. “Just found this emailed from Xenakis an hour ago: “While we don’t always agree with our reviewers, we look forward to working with City Paper in the future. Thanks and have a great weekend.”

The other complainer , which is a major sponsor of “Buck Commander,” the hunting-themed Outdoor Channel television show in which Aldean is a partner.  (Asked yesterday if they too demanded CP yank the review, a spokeswoman for Baltimore-based Under Armour has not yet called back with a response.) (Correction: “Arena, not Under Armour, was prime complainer about City Paper review.)

What does Serpick say about the identity of the advertisers? 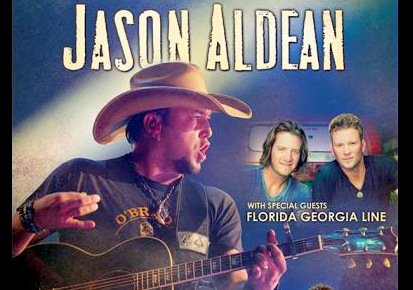 A reviewer’s harsh write-up of a Jason Aldean concert, yanked under pressure from advertisers, has turned into a censorship controversy for Baltimore City Paper.

He referred us to the person who ultimately told him via email to pull the review, CP general manager Leslie Grim. (Grim has not returned several calls from The Brew.) Did Scranton-based Times-Shamrock tell Grim to pull the piece? CEO Scott Lynett, reached by phone in Scranton, said no.

“This is the first I heard of it,” he said. “I don’t meddle with the editorial side.”

What about the spiking of MacLeod’s f-word column? “I did get involved in that,” he said. Did he also order Serpick not to substitute a blank page to show that Mr. Wrong had been censored? Well, yes, he said, “That was just foolish.”

To readers who might conclude that this censorship was a byproduct of the recent purchase of the alternative weekly by the local newspaper-of-record, The Baltimore Sun, senior editor Baynard Woods says, think again.

The whole affair took place before last week’s announcement of the weekly’s impending sale to the Sun’s corporate parent. Whether or not Grim was acting on orders from Times-Shamrock (Lynett never spoke to her, he said) is unclear.

“Both the general manager [Grim] and I resisted,” Serpick said. The advertisers insisted “the review was ‘not objective,’ which was ridiculous, since it was a review. It was opinion, obviously,” he said. He and Grim also argued that Kitchens is a respected writer about country music and pointed out that he is now doing CP’s “Strum und Twang” country music column, but “it fell on deaf ears,” Serpick said.

Grim (who is also the CP advertising director) was made general manager in the wake of the departure last summer of Jennifer Marsh to take a job as “niche products director” for the Baltimore Sun Media Group. Once the sale to is finalized next month and City Paper moves to their new parent’s Calvert Street building, Marsh will again be CP’s general manager.

Woods, who assigned Kitchens the review (“It was great – it should have run!”) said the whole affair shows how the public conversation around the paper’s sale has oversimplified the narrative. Woods said he was not involved in conversations with advertisers about Aldean, but worries that Times-Shamrock is as much a bottom-line-oriented company as any other media chain.

“I hope the new overlords are better than the old overlords,” Woods said. “We were told not to speak to the press about this or comment on social media.”

Serpick made the same point: “It’s very worrisome. But for the moment, I’m taking The Sun at their word when they say they will let us remain independent.”

Pressure, but From Whom, Exactly?

Woods said he offered to quit, but didn’t when he realized they would pull the article anyway. “There’s not a lot to be said for the empty gesture to make yourself feel better that nobody pays attention to,” he said.

Serpick said he agonized, too, but gave in largely because he needs the job. “It’s embarrassing to say this, but I have a family and responsibilities,” he said.

“I regretted the decision almost immediately – it’s easier to be brave in retrospect,” Serpick wrote, in his piece on the paper’s website.

Both Serpick and Woods said Times-Shamrock has thus far largely ignored the paper’s famously snarky editorial side.  Advertisers, Serpick said, also know CP reviews can be harsh. So he and Woods were surprised by the reaction to Kitchens’ piece and not sure why it set off such a firestorm.

Jason Aldean is one of the co-owners and personalities featured on the “Buck Commander Protected by Under Armour” show on the Outdoor Channel.

Kitchens said he presumed Under Armour was one of the complainers in part because of its presence as a sponsor for Aldean’s Buck Commander-related clothing sales and other business. (It’s not hard on the Internet to find a photo of Aldean in Under Armour hunting gear posing with a recently-bagged buck.)

The company is a subsidiary of “Duck Commander,” the operation behind the Duck Dynasty show and brand. (Under pressure last year to drop its sponsorship of Duck Dynasty after published comments by its CEO Phil Robertson perceived by many as racially insensitive and homophobic, Under Armour stuck with them.)

Kitchens said Aldean even spoke about Under Armour onstage that night at the concert, noting that Baltimore was “the home of one of my biggest sponsors.”

Kitchens was clearly turned off by the whole scene, as well as the music. His review described the “puke smell” in the venue, the commercialism (with opening act Florida Georgia Line working a sponsoring whiskey-maker’s name into song lyrics) and the booths selling performers’ schwag such as beer cozies with the catch-phrase, “I’m about to get my pissed off on.”

His only regret, Kitchens said, was not making clear why he felt alright about characterizing the audience in the review as “rednecks.”

“I only called them ‘rednecks’ because that’s how how Aldean referred to them on stage,” Kitchens said. “He says ‘Where are my rednecks?’ And the crowd loves it, they go wild.”