Should it be called back scratching, quid pro quo or simply business-as-usual at City Hall?

What makes this significant? The contributions came during a time when Beatty was actively pushing for approval of a $107 million TIF tax credit from the city.

Beatty and his wife live in Baltimore County. Until last year, they never made contributions to City Council members or the mayor. (The Beattys did contribute to Martin O’Malley’s first run for governor in 2006 as well as to Baltimore City State’s Attorney Gregg S. Bernstein.)

“He’s not spending his money on elected officials in his own jurisdiction. This indicates to me that his spending is strictly a business proposition,” said Jennifer Began-Dangel, executive director of Common Cause Maryland.

In the case of Harbor Point, Beatty initiated an aggressive campaign to win the TIF tax credit over the objections of Carl Stokes, chairman of the Council’s Taxation, Finance and Economic Development Committee. (Stokes was not one of the nine Council members to receive Beatty dough.) 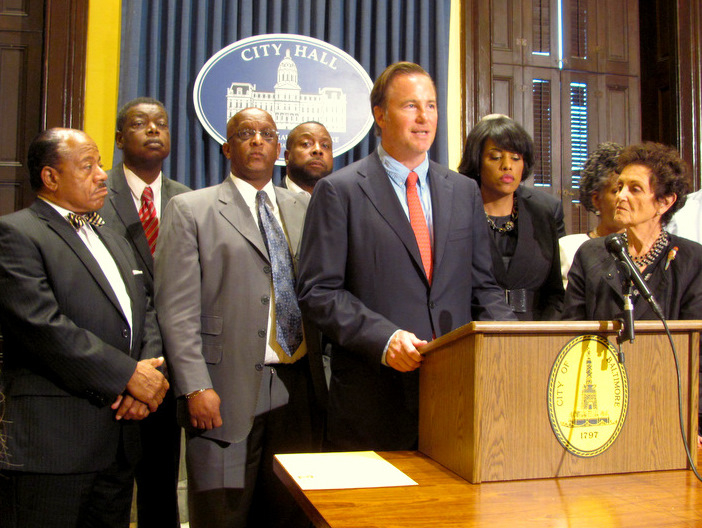 Bevan-Dangel said her good-government group has pushed for “black-out” periods where elected officials cannot solicit or receive funds from developers seeking zoning, tax or other privileges for their projects.

“Unfortunately in Maryland, money buys access and developers tend to invest the heaviest in campaign contributions because they yield the best return on their investment,” she said in an interview with The Brew.

City disclosure records show that Potter, a partner at the Gallagher, Evelius & Jones law firm, was paid $20,722 by the Beatty group to lobby the City Council on behalf of the TIF tax credit. Pica got $1,500 for his lobbying, which was limited to the final passage of the legislation.

Calling itself a “strategic communications firm,” KO does not file lobbying registration and disclosure reports to Baltimore’s Ethics Board or to the Maryland Board of Elections.

Sequence of Cash and Legislation

Here’s the sequence of events that yielded the $107 million public subsidy for Beatty:

• In March 2013, a month when many Councilmen hold fundraisers, the Beatty group and/or Beatty individually contributed the following:

• On March 28, 2013, during a closed voting session, the Baltimore Development Corp. (BDC) recommended to the mayor $107 million in tax credit finance bonds to pay for public infrastructure at Beatty’s proposed waterfront complex.

• Between April 18 and 23, the following contributions were made to the “Stephanie Rawlings-Blake For Baltimore” campaign committee:

– $4,000 from Nathalie C. Beatty, the developer’s wife. ($4,000 constitutes the maximum individual contribution allowed by Maryland law during the four-year election cycle.)
– $4,000 from Beatty, Harvey, Coco, Beatty’s late father’s New York architecture firm, which is listed as the “architect of record” of Harbor Point.
– $4,000 from Armada Hoffler, listed as general contractor of Harbor Point. The Virginia-based contractor constructed all of the buildings in Harbor East, which was developed by Beatty and H&S bakery mogul John Paterakis.
– $4,000 from Beatty Development Group, owned by Michael Beatty after he split from Paterakis.

• On June 3, Mayor Rawlings-Blake announced the introduction of legislation in the City Council that would establish a special taxing district for Harbor Point and create a special fund to divert property tax revenues from the treasury to the payment of city TIF bonds to build streets, parks and other infrastructure at Harbor Point. 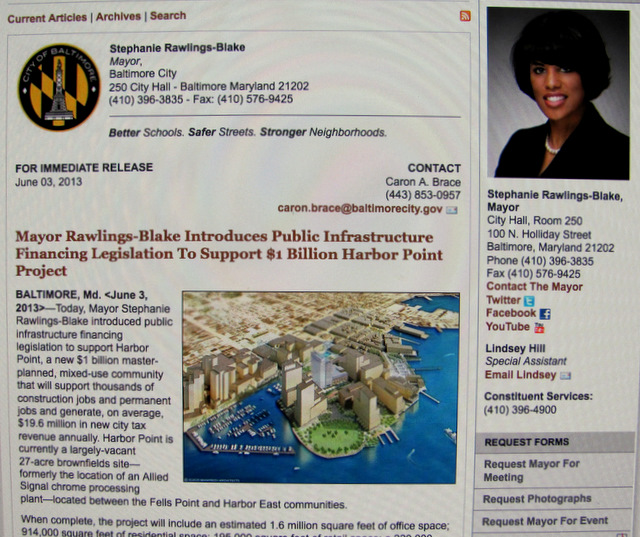 In a June 3 press release, the mayor announces introduction of Harbor Point TIF legislation to the City Council. (Mayor’s Office)

The mayor lauded the job creation and other benefits of the $1 billion development anchored by the proposed Exelon Tower.

KO Public Affairs coordinated the visuals and message by Beatty and others. 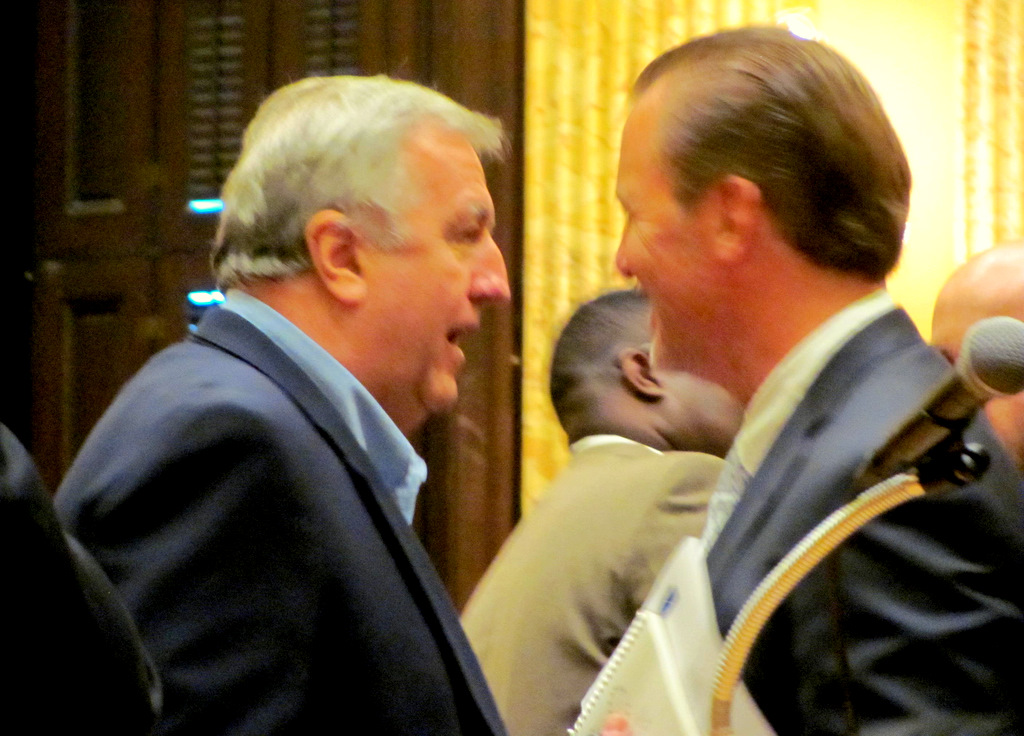 Councilman Reisinger confers with Michael Beatty before the August 7 Council hearing where the TIF legislation was “hijacked” by pro-Beatty forces, according to Chairman Carl Stokes. (Photo by Mark Reutter)

• In July, two public hearings before the Taxation Committee give voice to critics of the TIF tax deal and calls for a “giveback” by Beatty to low-income Perkins Home public housing residents near the site.

• On August 7, Councilmen Reisinger, Branch and Cole, forming a majority of the Taxation Committee, override Stokes and vote to move the TIF bill out of committee. Stokes stormed out of the room in protest of his committee being “hijacked” by pro-Beatty forces.

• On August 12, the full Council suspended its rules and votes to approve the TIF subsidy on second reader without the written approval of Committee Chairman Stokes.

[NOTE: Last summer, KO Public Affairs leaked to the media that Stokes was in the “pocket” of lawyer and Baltimore Orioles owner Peter Angelos, who opposed Harbor Point, KO said, in order to protect his downtown real estate interests. The Stokes campaign report discloses no campaign contributions in 2013 from Angelos, his real estate entities or his close associates.]

• On September 9, the full Council approved the $107 million Harbor Point TIF. Beatty joins Rawlings-Blake and other Council supporters for a press conference in the mayor’s offices.

• On January 8, Young and Rawlings-Blake give final approval of the $107 million TIF credit as members of the Board of Estimates. The panel’s third elected official, Comptroller Joan Pratt, votes against the deal, saying she needs more information. (Pratt’s campaign committee did not report any Beatty donations in 2013).

REACTION: We asked the elected officials who received Beatty contributions to comment on this article, specifically if the contributions influenced their support of the project and the TIF tax increment, and whether they saw anything wrong with elected officials accepting donations from a developer while his project is “in play.” 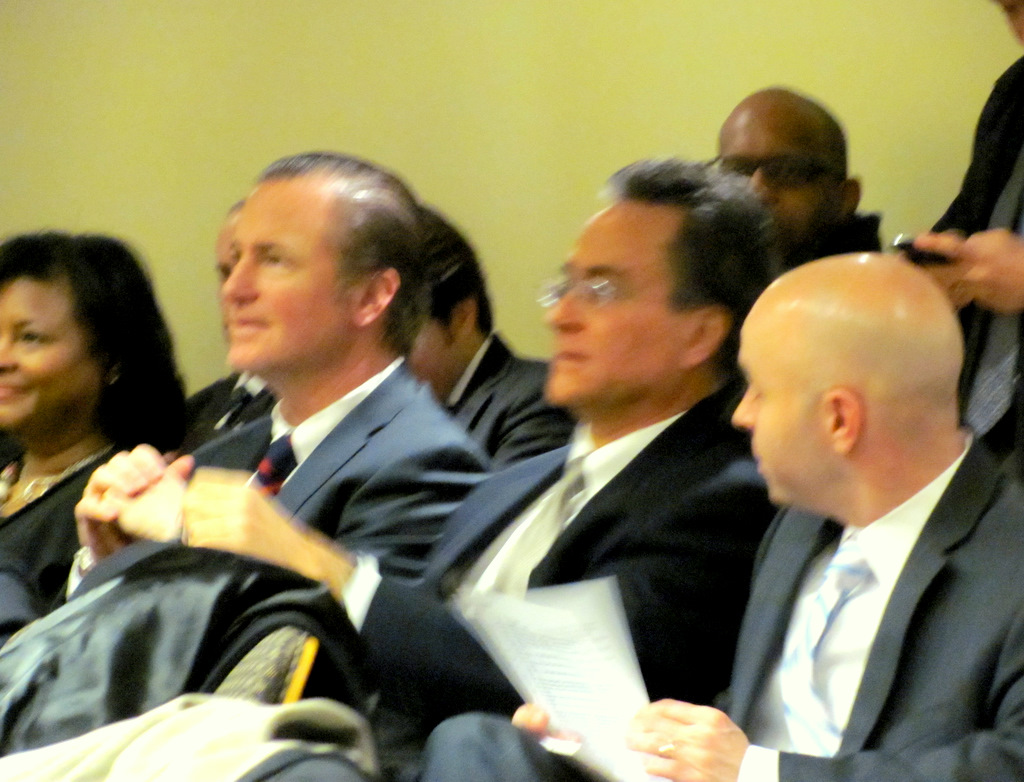 Michael Beatty attends the Board of Estimates meeting on January 8 when it gave final approval of the TIF tax credit. To his right is BDC President Brenda McKenzie; to his left, Harbor Point associate Marco Greenberg and lawyer Ryan Potter. (Photo by Mark Reutter)