UPDATE: The Board of Estimates voted this morning to reject the water contract, paving the way for a re-bidding of the work. No one from Spiniello Companies, the sole bidder, appeared to defend their price.

A city agency is urging the mayor and Board of Estimates to reject a contract to repair water meter infrastructure that is nearly 50% above the city’s estimate.

The request – contained in the board’s agenda for tomorrow’s meeting – represents a rare rebuke to Spiniello Companies, a New Jersey-based firm that dominates the emergency repair of Baltimore’s water mains.

Spiniello was the only company to bid on WC 1296, an “urgent needs” program to repair and replace deteriorating water meter vaults and valves across the city.

Typically, such a contract is bid by three to five companies. The sole bid by Spiniello raised eyebrows among City Hall observers when it was announced at the January 22 bid opening.

Board documents reviewed by The Brew disclose that Spiniello’s $21,613,300 price is 46% above the $14.8 million estimate by the city’s engineer. And the bid is double the city’s original estimate that the work could be done for as little as $10 million.

According to records reviewed by The Brew, the Bureau of Water and Waste Water “re-looked” at the engineer’s estimate after the Spiniello bid was opened and “adjusted the unit prices of those items that could have been underestimated” by the engineer.

Even with this upward revision of about $700,000, the agency still came up with a price that was $6 million less than the Spiniello bid.

Only one bid was received in January for the metering contract. (Board of Estimates bid sheet)

Spiniello has dominated the repair of broken water mains under a series of contracts and extra work orders approved by Mayor Stephanie Rawlings-Blake and the Board of Estimates.

The company has won more than $50 million in city contracts since 2010, including $16.7 million to replace ARB (Automatic Reading and Billing) water meters that were blamed for thousands of mis-read and estimated residential water bills.

The Brew has reported that the company secured $19 million worth of EWOs (Extra Work Orders) repairing ruptured and leaking water mains in recent years, including major breaks under Dundalk Avenue and at Light and Redwood streets downtown.

Spiniello is part of the Itron team that won a high-stakes “smart” water meter contract last November, wresting the work from a group that included J.P. Grant, a major Rawlings-Blake campaign contributor who managed the 2012 and 2013 Grand Prix street race, and Dynis Inc., a small cell tower repair company that has since been sold.

The request by the Water Bureau to reject the Spiniello bid and readvertise the work is expected to be approved by the board.

Rawlings-Blake and other board members, including City Council President Bernard C. “Jack” Young, do not disclose their vote before the meeting.

Spiniello’s division manager, Todd Galletti, did not return a phone call seeking comment. The company’s main office has not answered an email asking why its bid was so much higher than the city’s estimate. 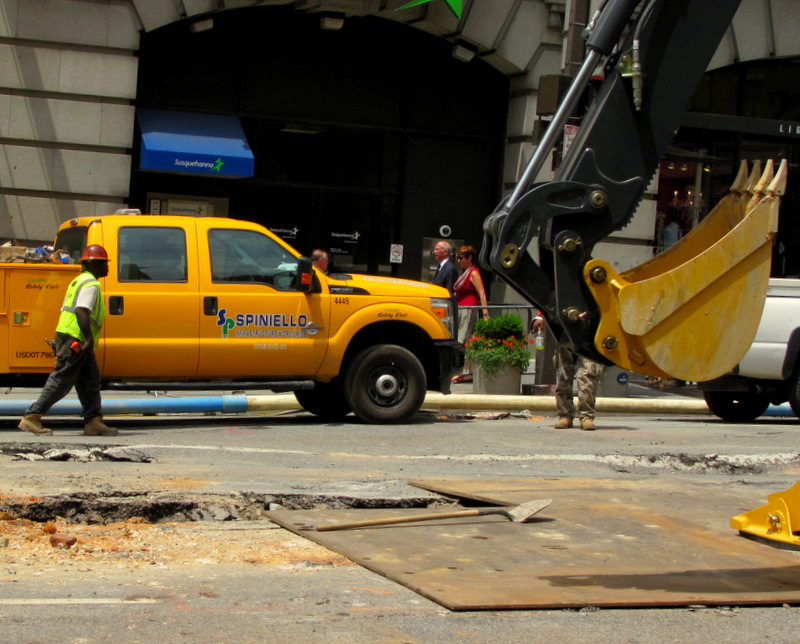 Spiniello works on the emergency repair of a ruptured water main that sent torrents of water down Light and Lombard streets in July 2012. (Photo by Mark Reutter)