Lee Truelove, who lives on East 26th Street opposite the deep gully used by CSX trains, saw it happen.

At about 3:45 p.m., “the cars on that side [of the street] went about three feet down. And the wall began to tip,” Truelove said, standing at the St. Paul Street intersection in the driving rain. She called 911 and the railroad, she said, and alerted her neighbors to come look.

“Then 15  minutes later, the whole thing just went,” she said. “It was gone in 15 seconds.” Truelove called the landslide both “exciting and creepy.”

Close to a dozen parked cars – together with the retaining wall, concrete sidewalk, iron fence and lone street light – slid down the embankment, burying the tracks in debris. 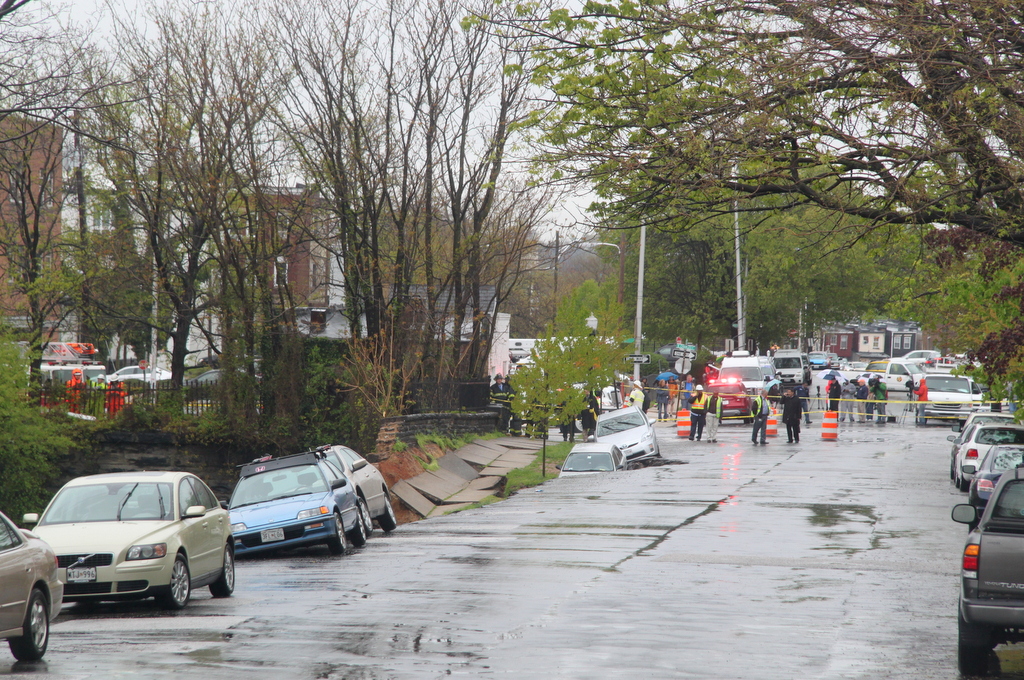 The sound, when it fell, was loud. Bob Leffler, an ad executive with offices on North Charles Street, was on the phone with a client when he heard the groaning roar.

“It was like the earthquake,” said Leffler, referring to the August 2011 quake that struck the city. “It didn’t shake like that, but it was really loud.”

No one was injured, according to city officials and Mayor Stephanie Rawlings-Blake, who briefed reporters at the scene.

The collapse came on the second day of a pounding storm  that has dumped over four inches of rain in the Baltimore region, causing widespread flooding.

Street was Slumping for Months

As a precautionary measure, city officials evacuated houses on the north side of 26th Street. Residents gathered on the street this evening.

Several told The Brew they had noticed the street pavement cracking and slumping for months. Leffler said there were other signs the retaining wall was not stable.

Recently, he said, that he noticed, a “dip” in the street near the retaining wall, while the sidewalk abutting the wall seemed to be buckling upward.

Truelove said she has been worried about the slumping street for even longer and suspected “it might go” because the street had collapsed once before, in the 1980s, on the other side of Margaret Brent Elementary and Middle School.

“I have refused to park my car on that side for the past two years because I was worried it was going to collapse,” she said.

Asked about reports that people have complained repeatedly to the city about problems with the street, Rawlings-Blake said she had “no information” about the reports and would be looking into them. 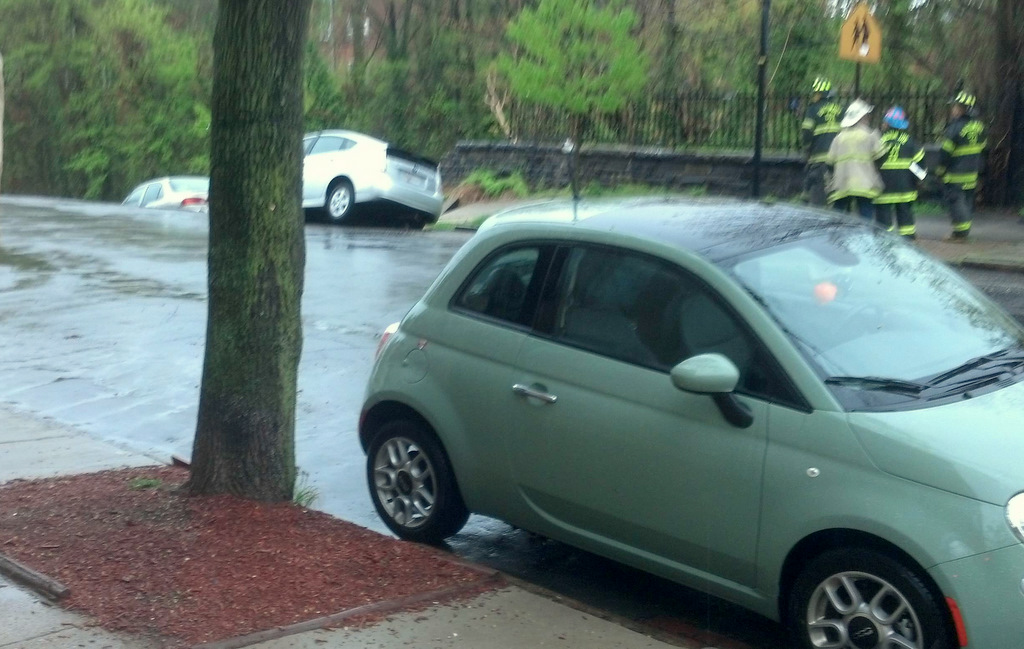 A view of cars that pitched down into the gully just west of St. Paul Street. (Fern Shen)

Complaints about the rail line on 26th Street date back decades, with residents complaining in a 1998 Baltimore Sun article that the wrought-iron fencing and walls around the rail right-of-way had been eroding for 15 years, “leaving gaping holes in the residents’ protection from a 30 foot drop onto the CSX train tracks.”

“I’m just sick of the condition of railroad properties in our city,” then-Councilman Bernard C. “Jack” Young is quoted as saying. “Overpasses are falling in.”

The stone retaining walls were a relic of the 1890s construction of the B&O’s “Royal Blue” line to New York that ran under Howard Street and then turned east along 26th Street along a right-of-way about 25-30 feet below street level.

The large open space on 26th Street between Charles and St. Paul streets was originally planned for a small passenger station.

The station was never built; instead, the railroad decided to build a central station in a then more populated area on Mt. Royal Avenue. Passenger rail service between Baltimore and New York ended in the late 1950s.

The single-track line now sees about 20 freight trains a day as the main route north for CSX. 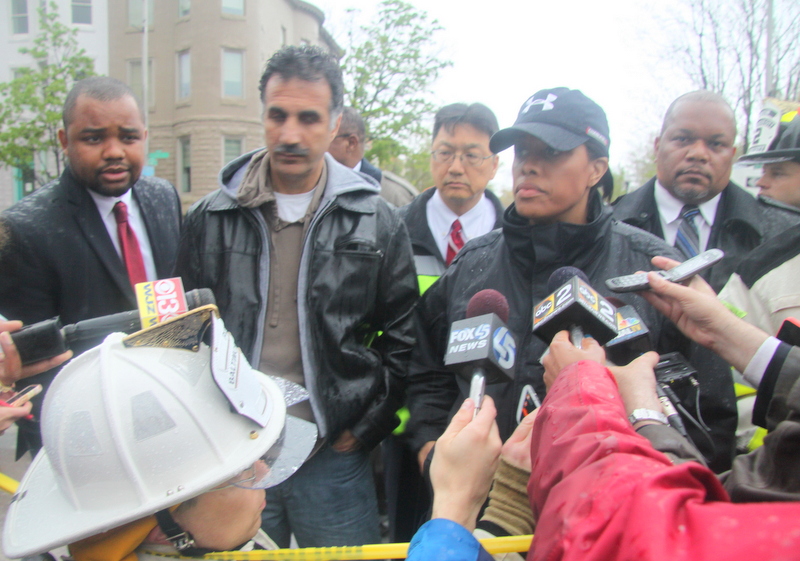