Baltimore City remains the poorest jurisdiction in Maryland judged by most indicators, but by one measure residents of two suburban counties seem to be moving more quickly toward financial instability.

Over the last five years, Baltimore County and Howard County had the state’s largest percentage increases in participation in the Food Supplement Program (also known as SNAP or Food Stamps) – at 143% and 140%, respectively.

By contrast, Food Stamp participation in the city rose by 58% during this period.

The changing face of poverty in Maryland, overall the nation’s wealthiest state, was one of several trends revealed by Maryland Poverty Profiles, a report by the Maryland Alliance for the Poor that used primarily 2012 Census Bureau data.

A coalition of service providers, faith groups and others working on behalf of the poor, the Alliance produces the report on a biennial basis. They prefaced this year’s 49-page compendium with the observation that, while the Great Recession may be technically over, many in Maryland have not seen much in the way of recovery.

“The lethargic journey to widespread economic security has left many of our neighbors underemployed, jobless and even homeless,” the report says, noting that “one in every 10 Marylanders lives below the poverty line, 575,000 individuals.”

The report does not focus on what is driving the suburban Food Stamp spike, though a number of plant closures, particularly in blue-collar eastern Baltimore County, could play a part.

It coincides with the shuttering of huge employers such as the steel mill at Sparrows Point, which shut down in 2012, costing the county 2,000 jobs and affecting 100 independent contractors and supply companies. Baltimore County also lost tech jobs, including video game makers Big Huge Games and the Baltimore branch of Epic Games. 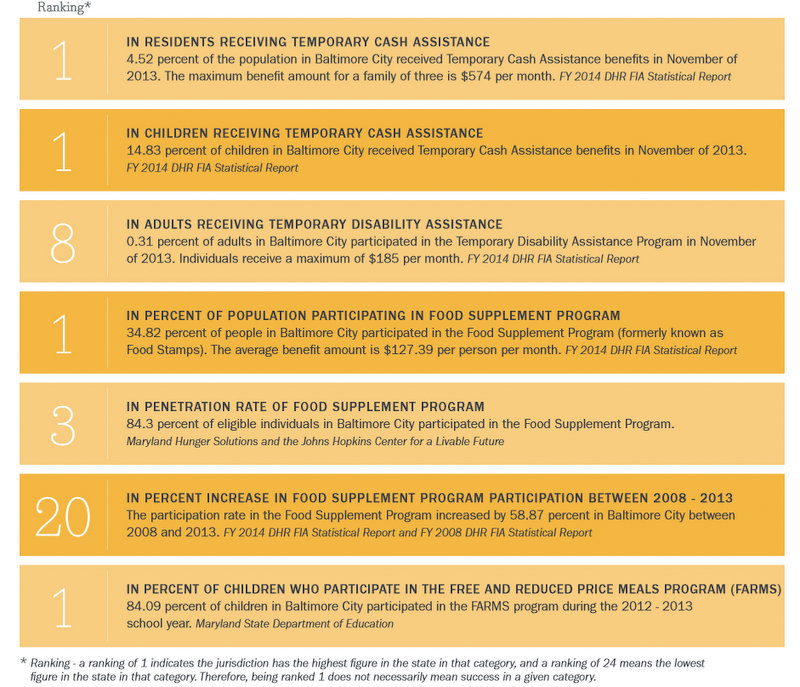 Data for Baltimore City in the Maryland Alliance for the Poor’s 2014 Poverty Profiles report.

Other Baltimore-area suburbs saw Food Stamp usage rise too. Over the past five years, it increased 128% in Anne Arundel County and 108% in Carroll County, according to the report.

Charles, Montgomery and Prince George’s counties also saw spikes – each of these three suburban Washington jurisdictions saw the number of residents participating in the Food Stamp program double over the past five years.

Housing prices in these counties make them among the least affordable, the report observed. To afford an efficiency apartment at the Fair Market Rent, a worker there needs to earn $22.62 an hour – the equivalent of 125 hours a week at the current minimum wage.

Still for overall poverty, Baltimore City surpassed the state’s other 23 jurisdiction by far, with one in four residents living below the federal poverty line.

The statistics are grim up and down the city’s demographic range. Baltimore ranks highest for child poverty. Nearly two in five children live in poor households. The data show that fully one-third of city children are in families living below $23,492, the poverty line for a family of four.

City students are overwhelmingly poor – according to the report, 85% qualify for free and reduced-price meals (the so-called FARMs rate). The FARMS rate for Baltimore students is the highest in the state. 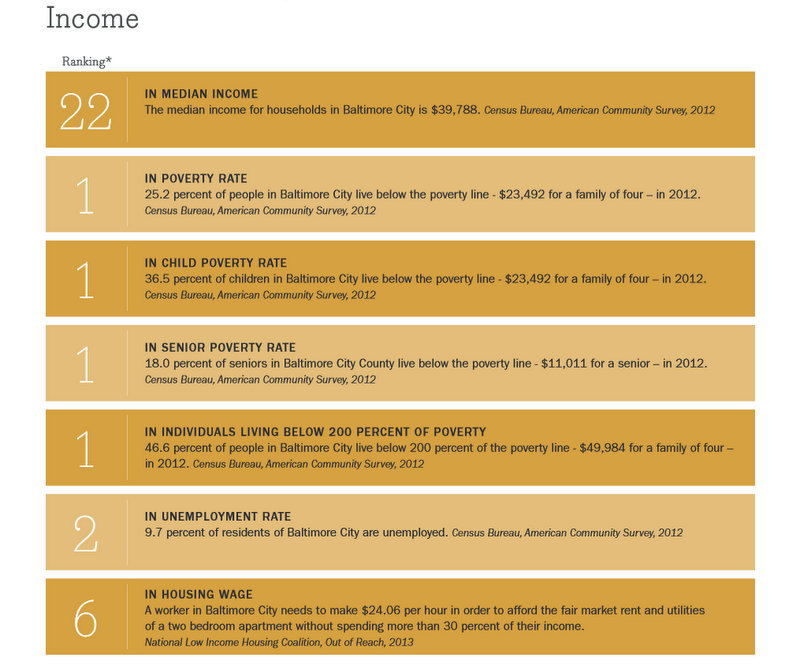 More data for Baltimore in the Maryland Alliance for the Poor’s 2014 Poverty Profiles report.

Poor senior citizens? Baltimore city leads the state there as well. In 2012, 18% in Baltimore lived below the poverty line for seniors, which is $11,011 a year.

The profile looks beyond the extreme poor to individuals living below 200% of poverty, which was cited as $49,984. Baltimore led the state here also, with 46.6% of residents living on less than that.

Although it provides no analysis, the report does quantify some factors possibly contributing to the poverty rate, such as joblessness and high housing costs.

At 9.7%, the city unemployment rate topped all other jurisdictions except for Worcester, where the rate was 9.8%.

Citing 2013 data from the National Low Income Housing Coalition, the report had this statistic for Baltimore city:

“A worker in Baltimore City needs to make $24.06 per hour in order to afford the fair market rent and utilities of a two bedroom apartment without spending more than 30 percent of their income.”