Faced with the loss of more than 40 bicycles stolen on Memorial Day, the Recreation and Parks Department has suspended its “Ride Around the Reservoir” program at Druid Hill Park and is asking the public to help it recover the bikes.

Among the bikes stolen: large blue beach cruisers and blue children’s bikes each marked with a numbered sticker.

“This loss is devastating to the Ride Around program, which operates completely on donations,” said agency director Ernest W. Burkeen Jr. “We ask that if you see one of our bikes around town to notify us or the police immediately.”

Burkeen added in a press release issued this afternoon: “If you are in possession of one of the bikes, you can drop it off at the closest recreation center or BCRP headquarters [3001 East Drive in Druid Hill Park], no questions asked.”

The Ride Around program allows park patrons to borrow bikes and helmets and take a spin. The program began in 2006 one day a week at Druid Hill Park. It has since expanded to four days and includes Carroll Park, Lake Montebello and a lunchtime employee ride on Fridays at City Hall.

The program is also part of the Camp Baltimore summer camp and serves thousands of riders of all ages each summer, according to agency spokesperson Gwendolyn Chambers. 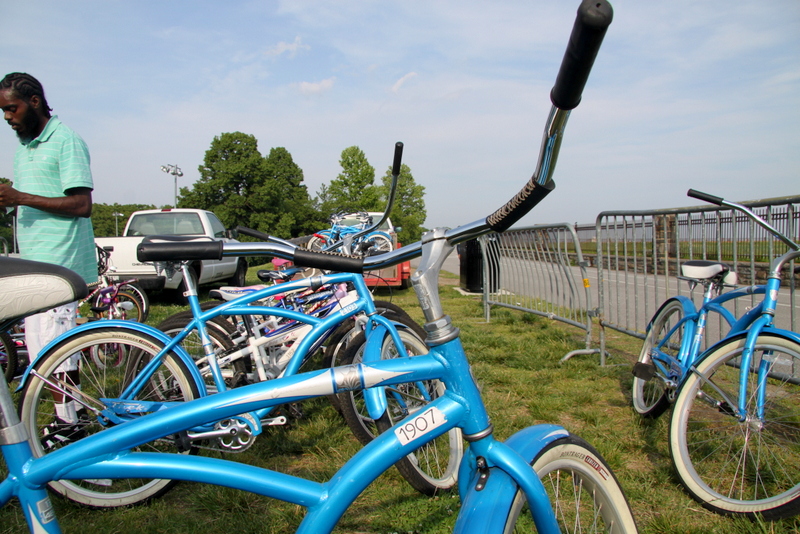 Closer view of the Recreation & Parks program bikes, from 2012. (Photo by Ben Halvorsen)