As Baltimore’s revised youth curfew ordinance took effect Friday night, apparently without incident, another youth initiative was getting underway – this one led by the kids.

Teens wearing blue t-shirts hit the bricks at the Inner Harbor, a longtime site of tension between police and young people, for the launch of “The Hood2Harbor Peace Ambassadors Program.”

While the new curfew focuses on getting kids off the streets, the Peace Ambassadors aim to help their peers while they are – during curfew-compliant hours – on the streets in a high-profile part of the city where they really want to go.

“Kids see the Inner Harbor as a cosmopolitan public space and don’t want to be excluded from it. It’s a social setting for them, like a school dance,” said Celia Neustadt, founder and executive director of the Inner Harbor Project, which unveiled the Ambassadors program.

The overall purpose of the program is to promote safety and “inclusivity” at the tourist waterfront area, according to Neustadt. “They want to shop at stores directed to teens, like H&M and Wet Seal. They want to hang out and meet friends, and make friends, here.”

Peace Ambassadors will be present at the Inner Harbor on Friday and Saturday evenings from 7-9 for the remaining weeks of summer and immediately after school lets out in the fall and spring.

The ambassadors will be speaking with teens and getting them involved in the project’s long-term initiatives: teen mediation, a teen discount card for Inner Harbor attractions and a code of etiquette for behavior.

Recognizable by their blue shirts, the Ambassadors will be spread out over three “posts” at the Inner Harbor amphitheater to Pier 4, the amphitheater to the Kaufman Pavilion, and McKeldin Square to the Gallery.

Hood2Harbor grew out of some focus groups on the issue conducted by Inner Harbor Project youth, said Neustadt, a Charles Village native and recent Pomona College grad who got grants and worked with the Waterfront Partnership to start the organization.

The research, she said, showed that a good deal of violence at the Inner Harbor can be attributed to conflicts between groups of teens. Some teens come to the harbor to create mischief, while others feel excluded for various reasons, such as not having the money to access the attractions.

There are other factors that make the attractions less immediately accessible. For example, beach volleyball requires team registration and signup and may have age requirements.

Peace Ambassadors Diamond Sampson and Adrian Hughes said on Friday that many teenagers who come to the Inner Harbor do so on their own, via public transportation. 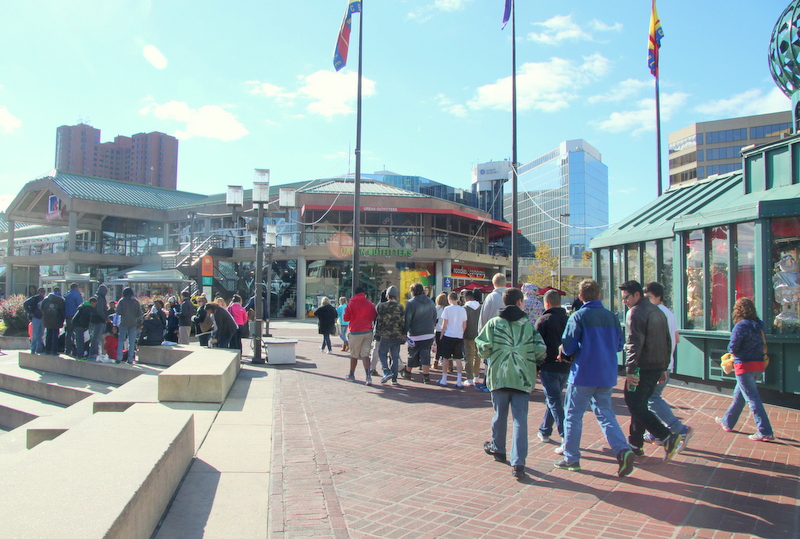 Baltimore’s Inner Harbor is a popular destination for young people as well as tourists. (Photo by Fern Shen)

“From a lot of neighborhoods, you can get here with one bus ride,” said Sampson, who attends City College and likes to eat at the Cheesecake Factory and shop at Urban Outfitters when she can afford it.

The new Inner Harbor discount card, which will debut in the fall, will offer substantial discounts to stores and attractions for teens who fulfill certain requirements, such as signing a pledge, volunteering with a nonprofit and joining Hood2Harbor.

The card is designed to be an incentive for positive behavior.

In 2012, a Republican from Baltimore County, Del. Patrick L. McDonough, called on the governor to send the Maryland State Police to protect the Inner Harbor from “roving mobs of black youth,” a comment his Democratic colleague, Del. Keiffer J. Mitchell, labeled “race-baiting.”

Neustadt said she doesn’t think the controversial curfew will have any impact on the Inner Harbor. “[The curfew] has always been enforced earlier here, so kids have time to get home,” she noted.

Now between 9 p.m. and 6 a.m. any night of the week, youth under 14 in Baltimore can’t be out unaccompanied by a parent, guardian or adult. 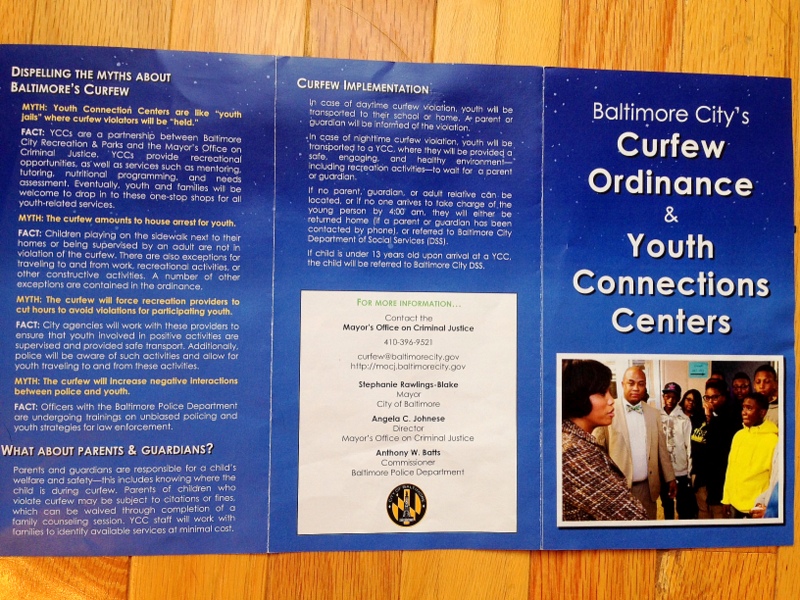 Youth between 14 and 17 have to be inside or under adult supervision between 11 p.m. and 6 a.m. any night during the summer, with more restrictions during the school year.

The curfew also has some exceptions, such as for youth standing on the sidewalk in front of their or their neighbor’s residence (as long as the neighbor doesn’t object) or youth traveling to or from work.

Elephant in the Room

The curfew is a touchy topic for members of the Inner Harbor Project. Its advisory board includes a police official and leaders of the Downtown Partnership, Visit Baltimore and a representative from the Cordish Companies and City Councilman William H. Cole IV.

Sampson and Hughes both said they had no comment about the curfew. 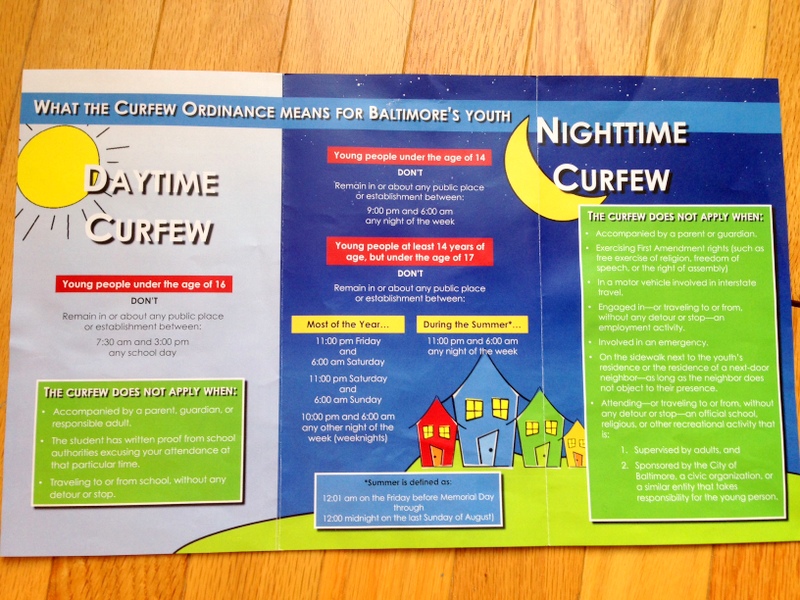 Flip side of the pamphlet on Baltimore’s youth curfew. (Photo by Danielle Sweeney)

Neustadt noted that the Inner Harbor Project signed a petition opposing it.

“It’s happening. There’s nothing we can do about it. But we do feel those resources could have been better spent on positive outlets,” she said, adding after a moment, “I do have concerns that some kids will react badly to it.”

That feeling seems to be the elephant in the room in Baltimore right now. City government is still evasive about some specifics of the curfew and its implementation.

Although the curfew has many supporters, two “town hall” meetings hosted by the mayor and other city officials were met with protests and apprehension.

One attendee at the town hall held at the University of Baltimore Law Center’s Moot Court on July 29, shouted out randomly, “Is this curfew about the Inner Harbor?” apparently, meaning youth crime in the tourist district.

To which another attendee replied as he stormed out of the room in frustration, “Well, they’re damn well not locking up kids in Guilford!”

Among the groups with concerns about the implementations of the curfew is the American Civil Liberties Union of Maryland.

The group sent a letter to Mayor Stephanie Rawlings-Blake and Police Commissioner Anthony Batts on August 6 “seeking clarifications” on the city’s plans – specifically, what happens to youth during the five days a week when the Youth Connection Centers are not open. (Currently, the centers are only open on weekend nights).

The ACLU also asked what happens to youth without ID (youth are not required to carry it), and how will police respond to youth who flee or do not want to accompany them.

Additionally, the ACLU filed a Maryland Public Information Act request seeking all records pertaining to the plans and implementation of Baltimore’s curfew. Sonia Kumar, a staff attorney for the organization, said that as of Friday, the ACLU had not received a reply from the mayor’s office.

So, how did the first weekend of Baltimore’s revised youth curfew go?

An email to the mayor’s spokeswoman, Caron Brace, on Saturday morning asking how many youth violated curfew Friday and how many were sent to Youth Connection Centers was not answered. (Nor was a similar email sent on Sunday morning.)

Instead, Brace wrote a one-word email reply: “Standby.” The Brew remains on “standby” waiting to hear from her.

Kumar said the ACLU has not been contacted about any curfew-related problems. “But the way our system works,” she added, “we wouldn’t necessarily know about them immediately.”