After the massive southeast Baltimore dance club Voltage was shut down last spring amid years of complaints and violations – including a patron shot on the dance floor and the owner pepper spraying patrons, along with a police detective – many residents cheered.

The city Liquor Board revoked the club’s license, their version of imposing a death penalty.

But in one of his last acts as chairman, Stephan W. Fogleman and a fellow commissioner “un-revoked” Voltage’s license on April 10, an action they took at a hearing that was never published in the docket and at which no community testimony was permitted.

“We found out through the former chairman’s tweet there was going to be a reconsideration,” recalled Susan Hughes, the Community Law Center attorney for the club’s aggrieved neighbors.

In a deal clearly worked out behind the scenes and announced at the hastily called City Hall meeting, Fogleman announced that Voltage’s lucrative license had been brought back to life. In return, licensee Louis J. Principio III agreed to pay a $3,000 fine, shut the club and not open another at the same 5625 O’Donnell Street location.

Commissioner Harvey Jones had that day raised the idea of a fourth condition – that Principio have no connection to whatever entity purchases the license – but Principio’s lawyer said his client couldn’t promise that, and Fogleman never followed up on Jones’ suggestion.

Hughes retold this Voltage history before the Liquor Board last Thursday because Principio was back requesting yet another break, and she wanted the board, now chaired by Thomas Ward, to deny it.

She did not prevail.

The three commissioners granted Principio, a former owner of downtown’s Hammerjack’s, a hardship extension for his liquor license.

“I grant the right to sell by the end of the year as long as he has no interest in the bar,” Ward said. “It cannot be located anywhere in the southeastern [police district] under any circumstances.”

“That wasn’t so hard now, was it?” Kodenski said.

Voltage was seeking a break on the state law that specifies that a license expire if the establishment associated with it has been closed for more than 180 days (Voltage shut down on April 7,  so is nearing the 180-day limit. (Without the extension, the license would have expired on Saturday, Oct. 4.) 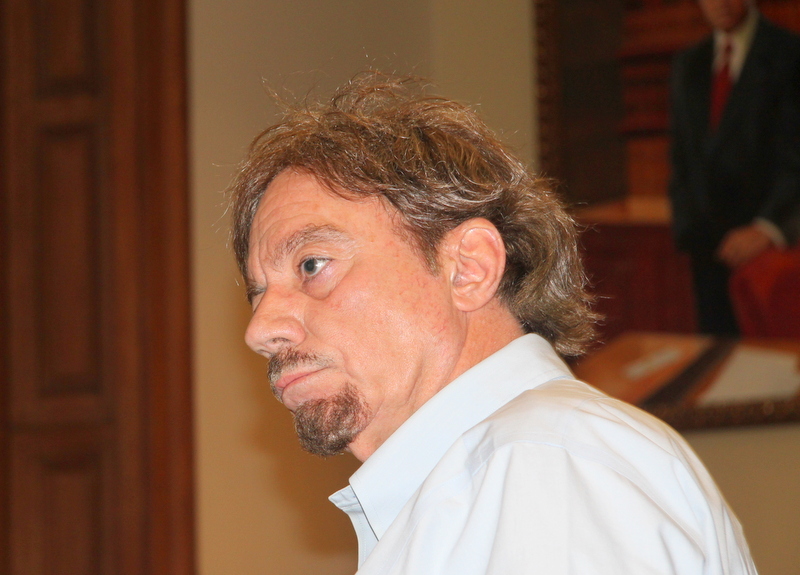 Voltage owner Louis Principio was back before the Liquor Board last Thursday. (Photo by Fern Shen)

The law permitting the board to grant extensions, 10-504(d)(4), requires that “an undue hardship exist causing the closing or cessation of the business operation.”

But Principio was not asking for an extension on the deadline because he’d had to close due to illness or a death in the family or a fire that damaged the property.

Principio’s proffered hardship was apparently that he’s been having trouble selling the license. His lawyer Melvin J. Kodenski explained why.

“We had a couple of buyers, they wanted to move it next to a church, next to a school,” Kodenski said, noting that his client had paid $50,000 to buy the license. “The economy up there’s not so good.”

CLC Attorney Hughes said Principio had not closed the bar because of a hardship but had done so “voluntarily” as part of a negotiation.

The commissioners voted unanimously to grant an extension. Principio was given until December 31 to sell the license. (Kodenski had asked for an extension to April 2, 2015.)

After the hearing, watchdog blogger Rebecca Lundberg Witt, of the Community Law Center, said the board had ignored 10-504(d)(4) and called their decision “disappointing.”

“The closing or cessation of business operations was caused by the licensee’s misbehavior and persistent violations, not because of any undue hardship,” she said, in an email to The Brew .

Without the finding of a true “undue hardship,” Witt said, the extension was not valid. “None of the commissioners even seemed to take the time to consider the issue when Susan brought it up,” she said. “They did not address it in their deliberations or in their decision.”

Witt went on to argue that following the letter of the law and letting the license expire would have saved the community from a licensee with a history of violations and complaints.

“It’s a terrible shame that the board did not take the opportunity to let this license expire; rather, they allowed a licensee who has wreaked havoc on Baltimore communities for decades, at Voltage and elsewhere, to profit from his license by selling it,” she said.

“Someone Must have Slipped the Gun in”

Hours of testimony from police officers at previous board hearings on a slew of violations at Voltage suggest the history Witt was referencing. Booze News posts include descriptions, for instance, of a November 1, 2013 fight in the parking lot.

“Detective Kincaid estimated that 100-150 people were involved in the fight. He testified that the licensee approached the commotion on a golf cart and began to spray pepper spray into the crowd,” Witt wrote. “Detective Kincaid said that Mr. Principio then sprayed pepper spray in the detective’s face. Mr. Principio, in the presentation of his case, insisted that he did not mean to mace the police officer.”

Witt also took notes on testimony about the December 2, 2013 shooting at the bar. 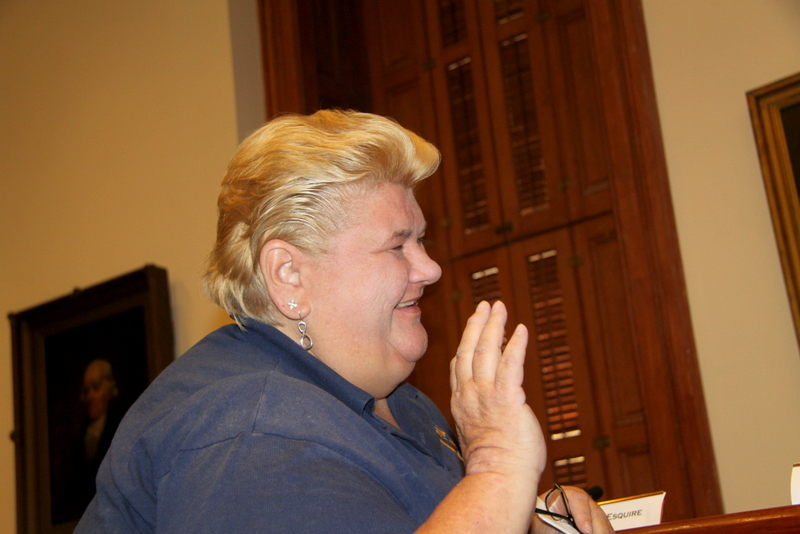 Joyce Adamski said she feared licensee Principio would be “a silent partner” with whoever buys the license. (Photo by Fern Shen)

A city police officer, Witt wrote, “said he’d been sitting in a marked patrol car and heard two gunshots. People came running out of the club. One man came out bleeding and said that he was shot in the back… Mr. Principio testified that someone must have slipped the gun in through an emergency exit.”

Hughes said on Thursday that community leaders were concerned that Principio might still have an interest in the license through whatever entity buys it. She noted that Voltage on many nights, Voltage “tied up the entire Southeast [police] District.” and required reinforcements from other districts.

There was a letter with 29 signatures from community protesting Voltage, she said. (She also noted that Lt. William Colburn, who she had planned to call as a witness, was not present.)

Ward acknowledged their cause for concern. “The record shows that this was a horrendous license with overwhelming problems,” he said.

He asked Hughes if restrictions on Principio’s future involvement and a ban on selling to any establishment in the southeastern police district wouldn’t alleviate the community’s concerns. At this point, Joyce Adamski, president of the Southeastern Police District Community Relations Council spoke up.

“I’m talking about any district,” she said, noting that she was friends with police-community council presidents in other parts of the city who would not want to have a club like Voltage. “He’s already been in the central district with Hammerjack’s.” She said she thought Hammerjack’s also had at one point been located in the city’s Southern police district as well.

Where would she rather he move the bar, Adamski was asked. “Baltimore County or just, outside of the city,” she answered, as commissioners laughed and rolled their eyes. “You asked my opinion!” she responded.

“Goodness gracious!” Ward exclaimed at this, point, saying that he hadn’t realized Principio was the former Hammerjack’s owner.

“When I was a judge at the Circuit Court, Mr. Principio kept us busy,” Ward said. He said that the now-closed Hammerjacks “was responsible for one sixth of all the matters in the Circuit Court of Baltimore City.”

Chuckling, he added, “I know a lawyer who retied on the amount of money he got from one assault.”

Commissioner Dana Petersen Moore also pointed out the history of troubles involving Principio’s most recent establishment, lifting up and showing the audience the huge Liquor Board file containing police reports on Voltage that Ward said she could review.

She didn’t seem to grasp the concerns about Principio’s possible silent partner ownership. “I don’t get it. We’re going to vote. Something has to be done. If you’re going to be involved, all this mishigash has to stop,” Moore chided him. “This is not acceptable! You agree, right?”

Then, in a lower voice, he added: “I’ll build one. I’ll make one work for other people. I’m very good at that.” 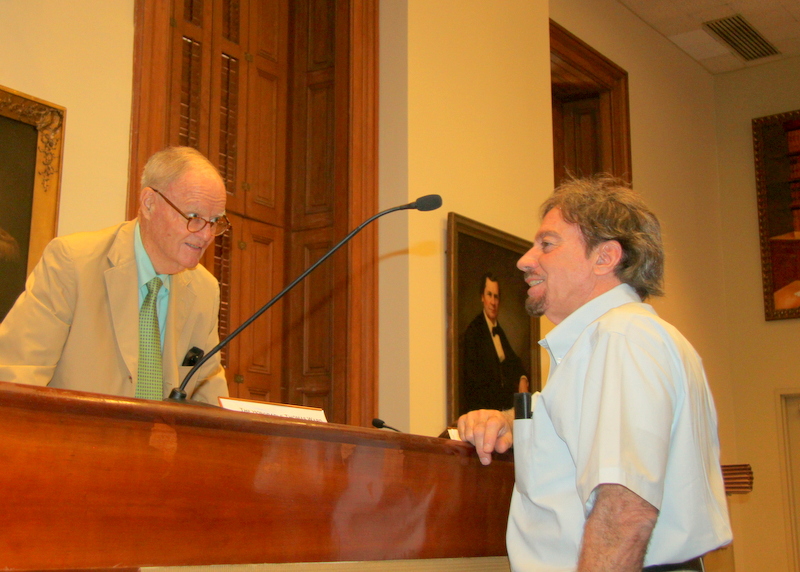 Liquor Board Chairman Thomas Ward and licensee Louis Principio after the hearing. (Photo by Fern Shen)