In one of several protests that flared across Baltimore today over Monday’s grand jury decision not to indict a white police officer for the killing of an unarmed black teenager in Ferguson, Mo., law students made a powerful statement by simply lying down.

About 18 people – some prone with their cheeks to the pavement, others on their backs, eyes closed, faces turned up to the sky – staged the protest at the corner of Charles Street and Mount Royal Avenue as about 50 people watched in silence.

The largely silent protest, organized by students at the University of Baltimore School of Law (joined by students from the Maryland Institute College Institute of Art), went on for about four minutes.

The idea, said a member of the UB Black Law Students Association, was to symbolize the four hours Michael Brown’s body laid in the street after police officer Darren Wilson shot him multiple times on August 9.

“What happened in Ferguson was an atrocity,” said Bryan Upshur, a second-year law student.

Upshur said students came up with the idea for the protest after the prosecutor in Missouri last night announced the results of the grand jury’s decision – no charges would be filed against Wilson.

“We thought [the protest] would be about 10 people,” he said, “but look at this.” He gestured toward the crowd which included media, several children, passersby and law professors, among them the school’s dean, Ronald Weich.

Protest Across the U.S.

In Ferguson, the grand jury announcement last night set off hours of protest and chaos – gunshots, fire, smashed police cars and looting. In New York marchers reportedly shut down the Triborough and Brooklyn bridges. In Washington, D.C., U-Street erupted into protest and some 400 people also gathered to protest in front of the White House.

In Northeast Baltimore, a Morgan State University protest grew to about 300 people and included protests outside the Police Department’s Northeastern District headquarters. At points, the marchers shut down intersections of East Coldspring Lane near the school.

The Rev. Cortly “C.D.” Witherspoon, president of the Baltimore chapter of the Southern Christian Leadership Conference, is holding a demonstration this afternoon at the Inner Harbor. [About 50 people had assembled at 4:15 p.m. at McKeldin Square.] 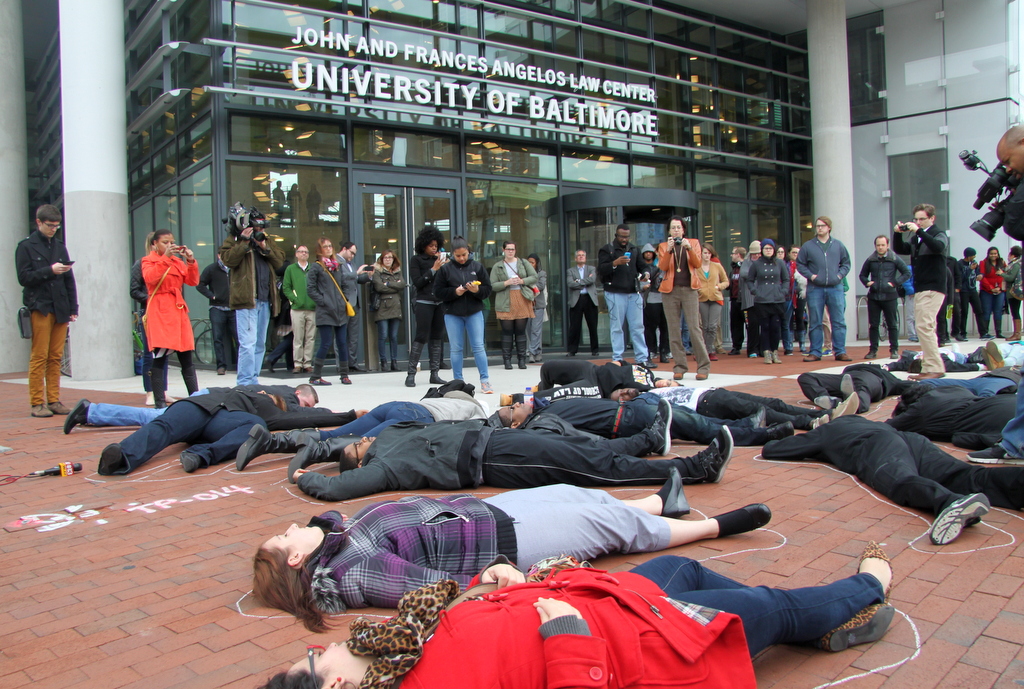 Students from MICA and the University of Baltimore Law School laid down today to protest the decision to not bring charges against the police officer who shot Michael Brown.

Another group, Baltimore Bloc, plans a march starting at City Hall at 6 p.m.

Mayor Stephanie Rawlings-Blake, who was in New Orleans last night for the Ravens-Saints game following a weekend of campaigning in Louisiana for embattled Democratic U.S. Senator Mary Landrieu, tweeted messages back to Baltimore urging protesters to avoid violence.

“While I undrstnd the frustration by Ferguson decision, it’s best to honor Michael Brown thru peaceful protest & constructive dialogue,” read one of several @MayorSRB tweets.

Addressing the protesters outside the John and Frances Angelos Law Center Building, Dean Weich noted that Rawlings-Blake and Police Commissioner Anthony Batts are working with the U.S. Justice Department “to ensure that the kind of excessive force and brutality that we see across the country is not repeated here in Baltimore.”

He was referring to the task force set up recently following coverage of the many excessive force cases involving police in Baltimore that result in out-of-court settlements with victims and families.

Those cases and others who died in violent encounters with Baltimore police – Tyrone West, Anthony Anderson and George King, among them – have driven months of protests in the city.

Law as an Instrument of Change

Weich applauded the students for holding their protest in front of the law school building.

“That in itself is a symbol,” he said. “I know there are disparities, I know there is an imbalance of power. But there are so many avenues. So many ways the criminal justice system can be improved.”

“Channel your frustration into social change,” Weich urged them.

The students are already poised to do just that. The National Black Law Students Association has a Ferguson Legal Defense Fund and the local chapter provides contact information for the member from Harvard Law School who is coordinating volunteers. 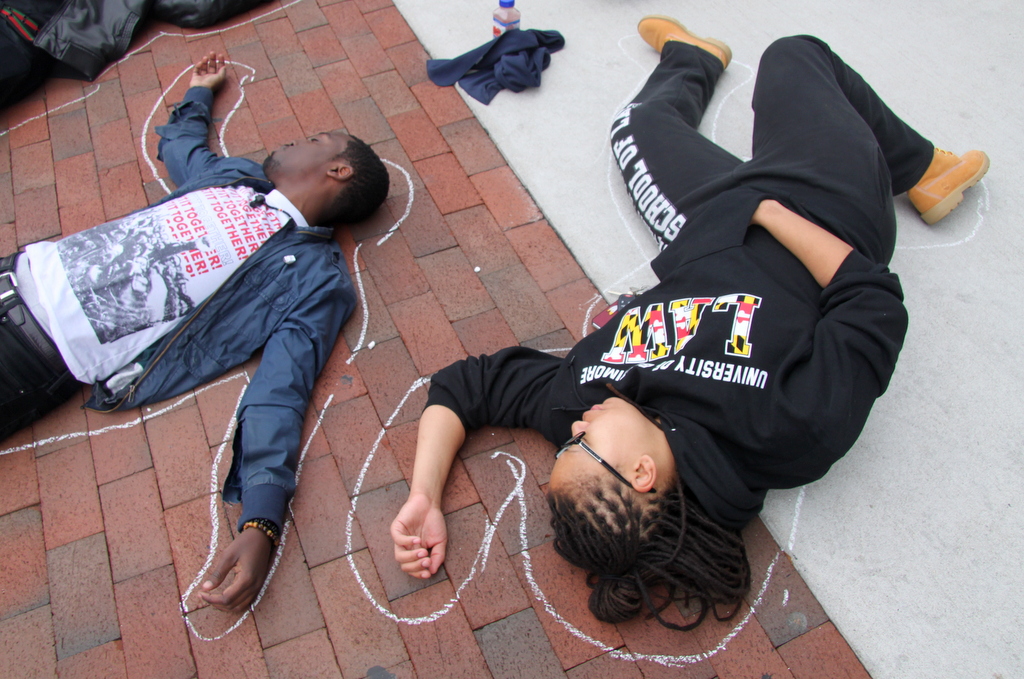 Students in front of the John and Frances Angelos Law Center in Baltimore, the day after the grand jury announcement in Ferguson. (Photo by Fern Shen)

To further illustrate his point, Weich might well have pointed to one of the organizers of today’s protest, first-year law student Steven Bryson.

Bryson talked about the systemic injustice he said propelled him not just to lie down on the street today, but to pursue the study of law and make it his life’s work.

The 2013 “not guilty” verdict exonerating George Zimmerman, the shooter who ended the life of another unarmed teen, hit him hard, Bryson said.

“The morning of the Trayvon verdict I got my LSAT books and took the test and here I am,” Bryson said. “That was such an outrage.”

Likewise, he said, the handling of case against Darren Wilson by the Missouri prosecutor “has been skewed from Day One.”

“Starting with a prosecutor who acted like a defense attorney on behalf of the officer and should have recused himself. . . There is so much that needs to change,” he said.