A Charles Village bar with a record of violations for serving alcohol to minors – and with more Liquor Board violations pending – is scheduled for a routine hearing this Thursday. The entry on the weekly docket includes this striking fact:

Councilman Robert W. Curran is listed as a co-licensee on the Maxie’s Pizzeria & Grille liquor license, along with Joyce Yun Chong of Pikesville.

Records show that Curran, who represents Northeast’s 3rd District, has been on the license for more than a year. And he was one of three city residents vouching for the owners on their January 2012 license transfer application.

Asked if he is an owner of the business, Curran told The Brew that he knows the owners personally and became a licensee as a favor to them. He said, “I have no financial interest” in the establishment, which is located at Charles and 31st streets.

But in a further twist in an already convoluted story, Curran said that he worked at the bar on Friday and Saturday nights for several months this year “on a volunteer basis,” checking customers at the door and helping to screen for under-aged drinkers.

Curran said he stopped performing these unpaid screening duties before the pending violations at the bar, which allegedly took place in October and last month.

“Prospective new owners got involved, and they said I was too stringent. I ran too tight a ship,” Curran said. “So they told me my services were no longer needed.”

Hoping to untangle this unusual tale, The Brew asked Joyce Chong’s husband, co-owner Chil Song Chong, if he would explain Curran’s role at Maxie’s. By the time we reached the establishment yesterday, Chong said his lawyer had advised him not to speak.

Hide in the Restrooms!

Records on file with the Liquor Board show that Curran’s relationship with the establishment goes back to January 2012 when he vouched for Joyce Yun Chong and her husband, Chil Song Chong, the two initial licensees, on their transfer application.

(Signatures are required from three people who have known the  licensee for two or more years, own real estate in the city and are registered voters. The two other signers were Alexander Hooke and Gloria M. Avert.)

In renewal paperwork, Curran and Joyce Chong are listed as the co-licensees. The file indicates that Curran was asked to submit all of the standard criminal background check information required of licensees, including being fingerprinted. 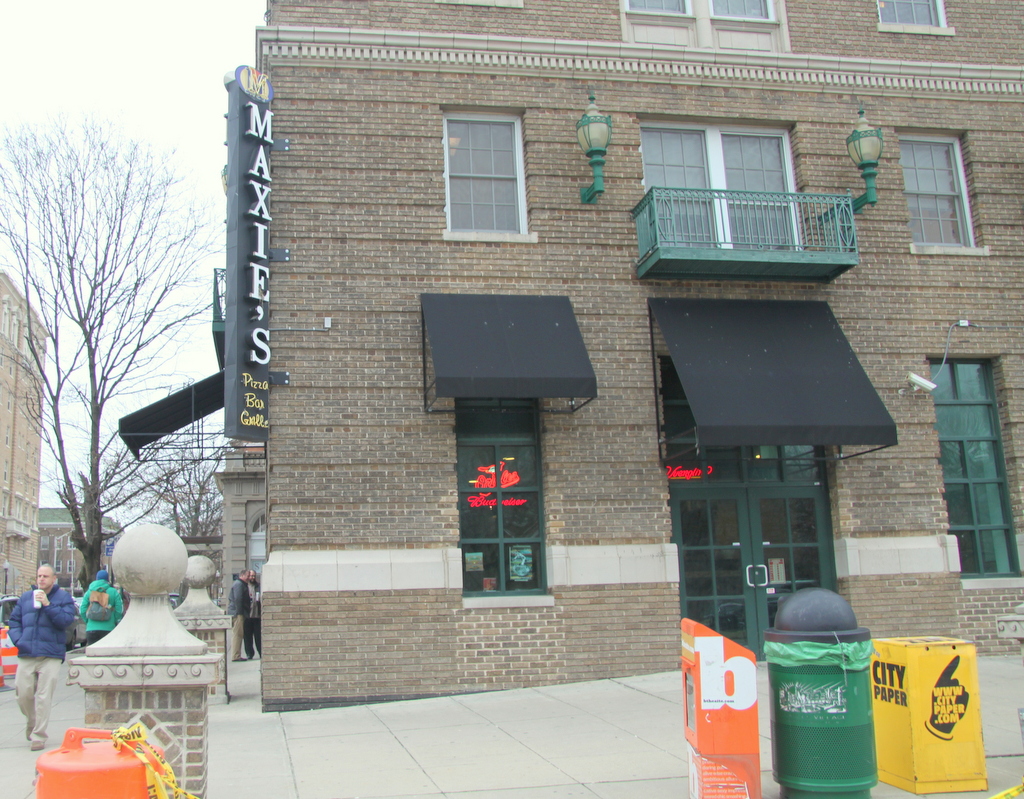 The violation scheduled to be heard Thursday involves a bar employee’s alleged attempt to hide the evidence of under-age drinking when the police came to investigate on October 24.

The employee “began to tell suspected underage bar patrons to ‘hide in the restrooms’ in order to avoid contact with Officers,” according to the board’s docket sheet.

The violation is for non-cooperation, although the police report described an 18-year-old found to be drinking a beer in the bar who did not appear to have used a fake id to get it.

After asking the Liquor Board about the case yesterday, The Brew learned that the hearing has now been postponed until January 8 or later, amid additional violations coming.

“We were made aware of another incident. There will be another set of charges. We are waiting for the police report,” Liquor Board executive secretary Michelle Bailey-Hedgepeth said. “We believe there are additional minor issues.”

Reports of underage drinking and overcrowding at Maxie’s from liquor inspectors, the city fire marshal and the police department go back to early 2012, according to Liquor Board records. One case also mention the presence of Johns Hopkins University security officers.

The establishment is located near the Hopkins Homewood campus, in a building owned by the university and managed by the Cordish Company. There is an upstairs carryout with counter service and inside and outdoor tables as well as a sub-basement bar.

A story on this incident in the Johns Hopkins News-Letter described it as part of “the recent influx of non-Hopkins students to Hopkins fraternities and Charles Village bars frequented by Hopkins students [that] has prompted concerns over safety.” 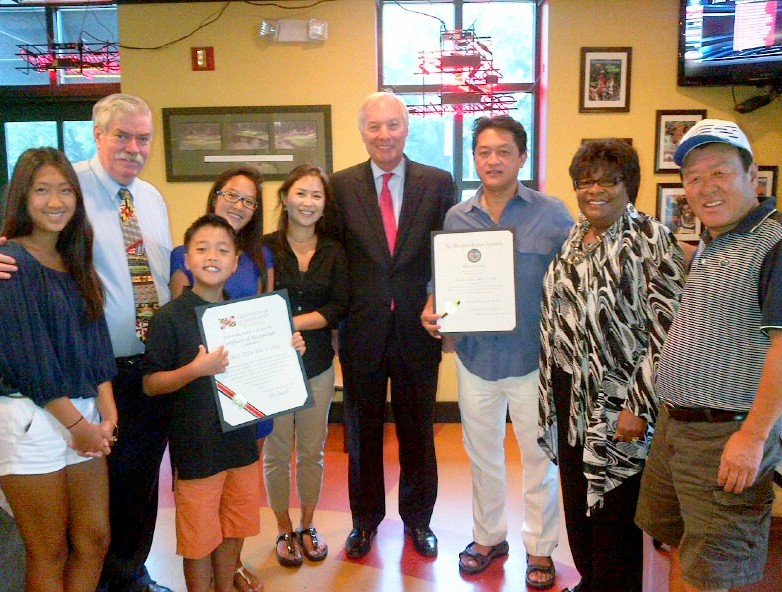 Then comes an October 6, 2012 incident that then-Liquor Board Chairman Stephan W. Fogleman described at a hearing as “chaotic.”

Fire Inspector Herbert R. Gross said in his report that it involved 200 people clustered inside and outside the establishment. “We are just glad that no one got hurt,” Fogleman said.

In the police report on the incident, in which the officer was responding to a reported assault, an 18-year-old was found with a Natty Boh in his hand and five other under-aged patrons who smelled of alcohol were found coming out of the bar. The Liquor Board inspector cited Maxie’s for multiple instances of selling to minors, as well as overcrowding.

“Mr. Chong, your lawyer will tell you we’ve reached the end of the road as far as underage activity, so if we see you again in an underage drinking situation you can expect a suspension from this board,” Fogleman scolded Chong, at the December 13, 2012 hearing.

Maxie’s had been charged with multiple underage drinking violations, but was allowed to plead guilty to one of them and to one charge of overcrowding. They were fined $2,875 plus a fee of $125 for a total $3,000.

Favor for a Friend

Asked about serving to minors, Chil Chong yesterday questioned why he should be singled out. “You think this is the only place that has these problems?”

Asked if  Curran has an ownership interest in Maxie’s, Chong said, “No comment,” and walked away.

The Chongs are pictured on the website of Comptroller Peter Franchot in 2013 receiving a proclamation from him, with photos showing Franchot, Curran and Delegate Barbara A. Robinson (40th District), and various family members including Amanda Chong. A LinkedIn page for Amanda Chong lists her current position as “legislative aide for Councilman Robert Curran.”

Asked to explain his relationship with Maxie’s, Curran said it was a simple matter of personal friendship.

“I’ve known the family for 20 years-plus, been to holiday celebrations and everything,” he said. Curran said he was introduced to Chong’s father by Jai Ryu, then special assistant to Mayor Kurt Schmoke and a liaison to the Korean community.

Asked why he took the further step of becoming not just a character witness for Maxie’s but a licensee, Curran said it was just another favor. He said Chil Chong’s father Max Chong asked him to be a “resident agent” on the license.

Curran was referring to what is known in Baltimore liquor regulation circles as the “Baltimore city resident.”

According to the statute, at least one licensee is required to be a city property owner. Because Chong had sold the property he owned in the city, he needed someone to be his “Baltimore city resident” on the license, Curran said. (The Chongs, living in Pikesville, are in Baltimore County.)

As for the propriety of a City Council member being a liquor licensee, Curran correctly pointed out that the law does not prohibit it.

(Although by not having a financial stake in Maxie’s, he is technically violating Article 2B §10-103 of the city statute, which does require applicants for a license to have “a pecuniary interest in the business to be conducted under said license.” The Liquor Board, according to attorney Rebecca Lundberg Witt, of the Community Law Center,  has historically ignored this provision of the law.)

As for his association with an establishment with multiple underage drinking violations, Curran defended Maxie’s as being unfairly blamed for problems not of its own making.

“These fraternities have parties and when they let out people are over-inebriated,” Curran said. “And then they come into Maxie’s and Maxie’s gets a black eye when it’s not their fault.”